Note: you can find the source code for this blog post with both Jest + RTL and Cypress + CTL specs in the repository rtl-article-2019.

This blog post is based on the excellent series of posts from Artem Sapegin about testing front-end code. In particular, this blog post follows the examples from Modern React testing, part 3: Jest and React Testing Library blog post. As the title says, we will be testing React components, only instead of using Jest test runner plus @testing-library/react (known as RTL) I will be using Cypress + cypress-react-unit-test to run the tests. Fear not - the change will be minimal, because we also will be using @testing-library/cypress (also called CTL). Thus our component tests will look exactly (well, almost, they will in fact be simpler) like before.

The cypress.json file has all Cypress global configuration settings, where I enable component testing and fetch polyfill experimental features.

Finally, we need to load the @testing-library/cypress from the Cypress support file - this will set up the querying commands like cy.findByText we will use in our tests.

I like having component and unit tests close to the source files, thus our tests will live in the src/components/__tests__ folder. There are Jest + RTL spec files there already; they use suffix .spec.js, so I will give Cypress component spec files .cy-spec.js suffix.

To limit Jest to only run __tests_/*.spec.js files we can add the following to the package.json file

There are several RemotePizza_*.spec.js Jest files showing the different ways of dealing with the network calls. We will look at them later; dealing with method stubbing and network control is one of the nicer Cypress features. For now, let's start with "Hello World" example.

We can start by inspecting a Jest + RTL spec file Hello.spec.js - it does not even have a corresponding component source file, since it renders an inline JSX.

The same test but using cypress-react-unit-test replaces render with mount and synchronous calls like render, getByText with implicitly asynchronous commands. 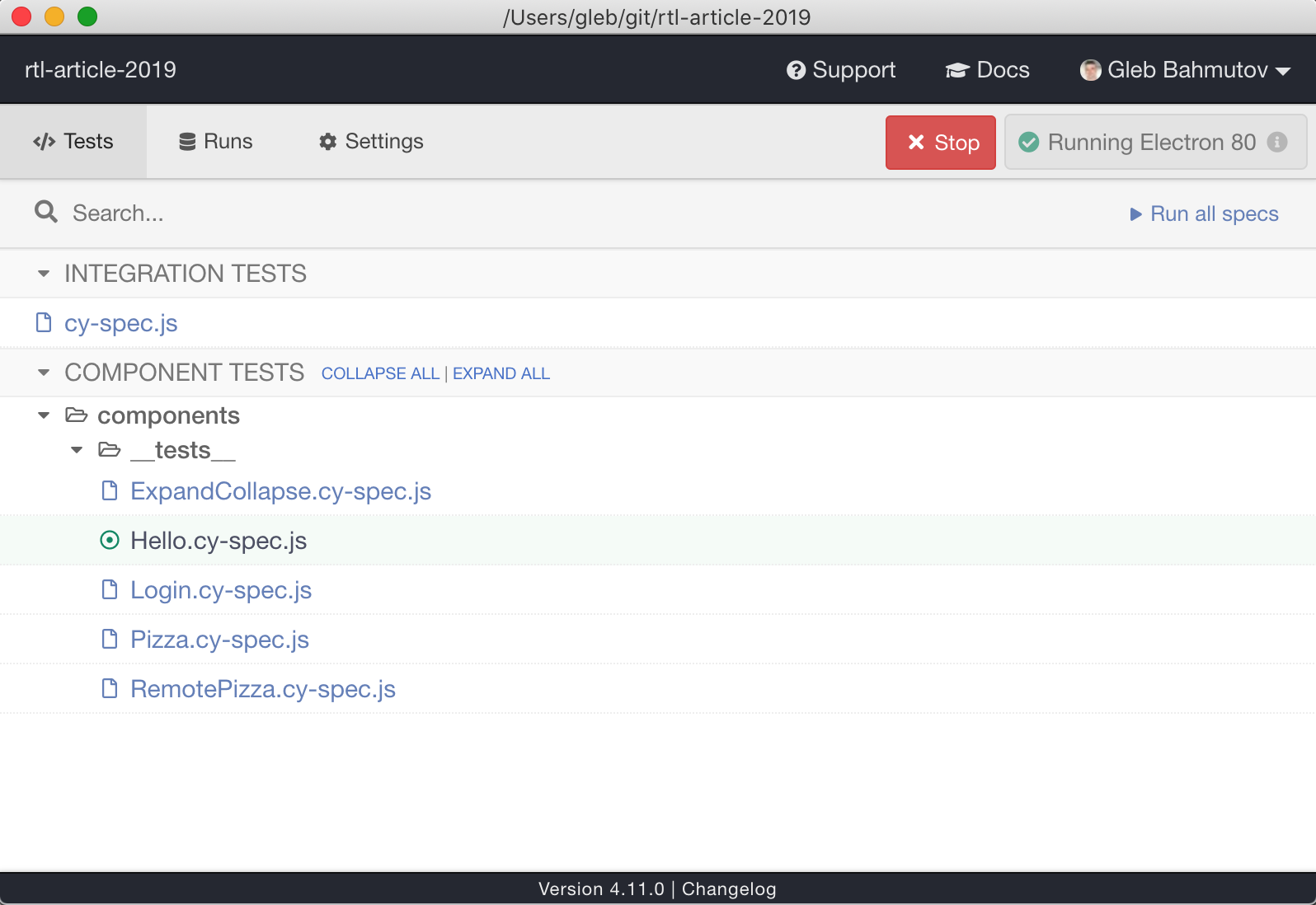 The component is mounted and shows up on the right side of the browser. The commands from the test mount and findByText are shown in the Command Log on the left. 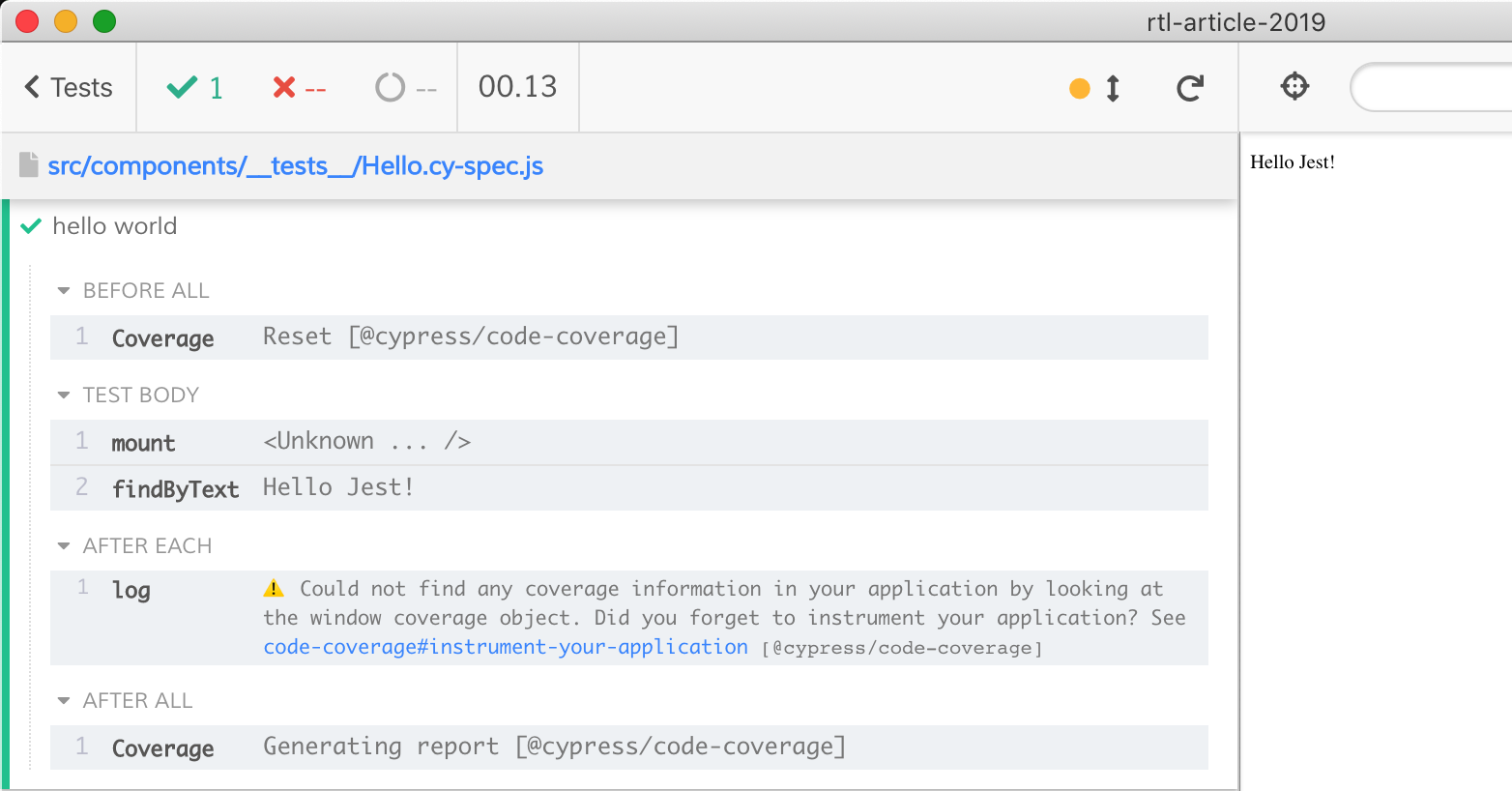 The Command Log is magical. This is where you can time travel and get more information about every command by clicking on it. Open the DevTools to see more information - because this is a real browser and real DOM elements.

You can see how cy.findByText command searched the document to find the element. Because this is a real DOM node, it is highlighted on the right automatically as you hover over its reference.

Tip: you see the <Unknown ...> in the Command Log for the mount command - this is because the component has no JSX name. In majority of cases you would see the JSX name because there would be a function name or component class name:

Tip 2: Cypress has built-in .contains command that searches by text or regular expression. Thus the above test could be written as

Just like cy.findTextBy, if the text does not appear in the DOM within 4 seconds, the cy.contains command fails.

We can shorten the retry time globally or per command if we know that our application updates faster.

The test still fails searching for the text that is not there, but now it fails after retrying for only 200ms. Cypress test runner has the built-in retry-ability which allows the tests to be less flaky, and allows us to write tests where every command is asynchronous, even if the test code looks "simple". This is well shown in the next spec file testing the ExpandCollapse.js component.

The test is synchronous - every action like firing the click event MUST be handled by the component synchronously in order for the test to work. For example, the component has the following logic to re-render on click:

Later we will break the above test by introducing setTimeout into onClick handler, breaking the test. But first let's see the equivalent Cypress spec file.

The test looks almost exactly the same, and very similar to the HelloWorld spec.

The Cypress commands are declarative and asynchronous. The component might have the internal logic to only re-render after 1000ms when clicking the "Collapse" button - let's change the component to this:

Instead of immediately updating the DOM, the component now "waits" 1 second. Our Jest test fails. 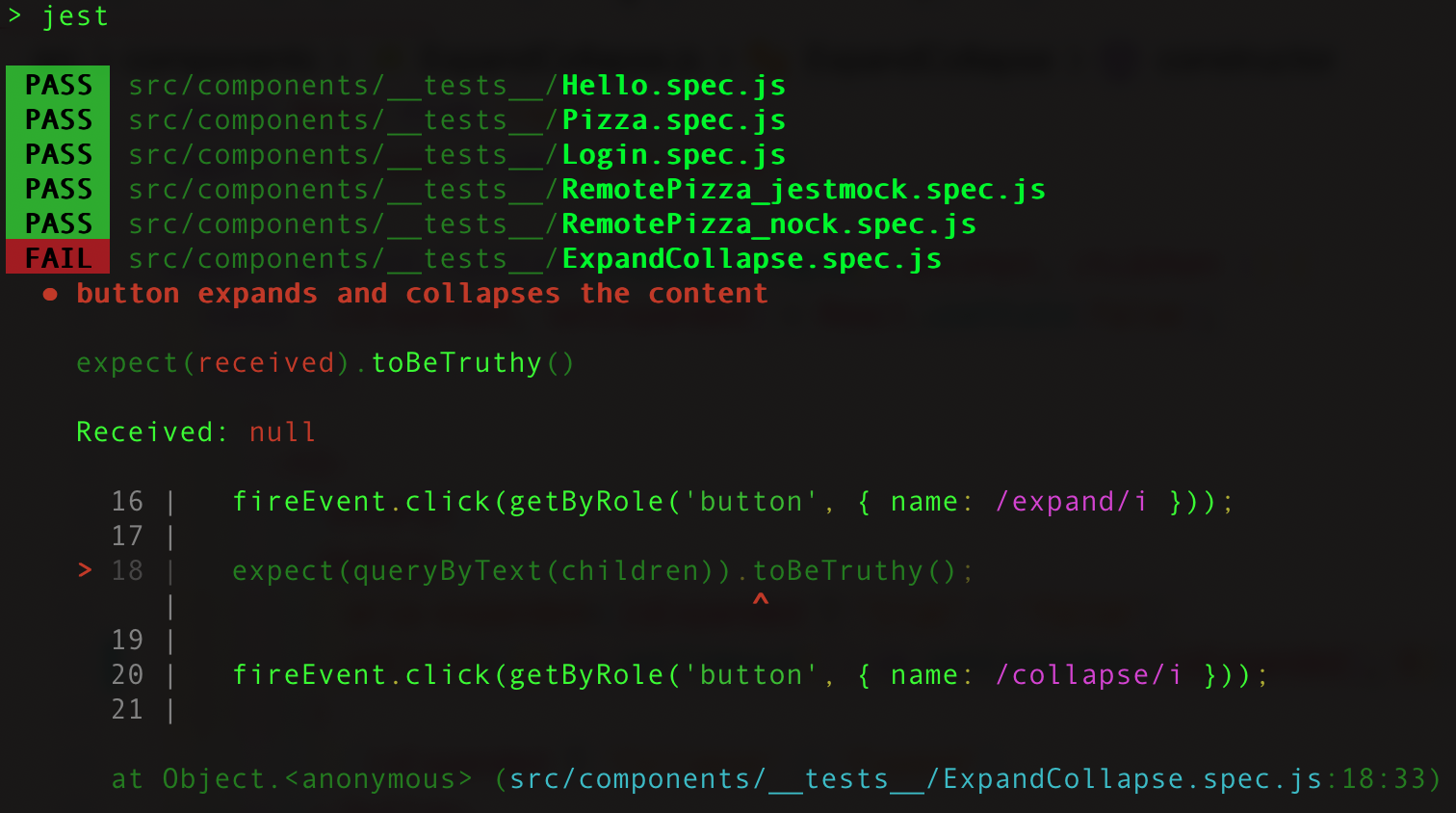 In fact, the Jest test as written fails even if the component has a delay of just zero milliseconds: setTimeout(..., 0). The Cypress tests meanwhile are happy as a clam. We can change the component update from synchronous to asynchronous, we can change the delay - it is fine, the Test Runner will retry its commands until the timeout or the DOM updates

The component tests in Cypress are meant to interact with the component using its public API: the props and the DOM without assuming anything about its internal code.

Our next example component renders a form with submit button. When the user fills the input fields and clicks the Submit button, the function onSubmit passed from the parent component as a prop is called.

The Cypress test is below; we create a stub function using the built-in cy.stub command. The stubs are reset automatically before each test, thus we don't need to worry about resetting them ourselves.

The test passes - our component does call the passed onSubmit prop with the password and the username object.

Tip: Cypress takes a video of the entire test run and screenshot images on test failures by default, you probably want to keep the sensitive data like the password out of the Command Log. Read the blog post Keep passwords secret in E2E tests to learn how.

The assertion block using .then that checks the function stub gives away the asynchronous nature of the test.

We need this .then block to run the synchronous code expect(onSubmit)... assertions after the click() command. We can avoid using .then by giving the stub an alias using .as command. Later we can retrieve the stub using this alias and use BDD assertions. The relevant changes in the test are below:

The test passes and you can see the alias in the Command Log when the stub is called.

Cypress stubs and spies are built on top of the powerful Sinon.js library, and Cypress includes Sinon-Chai assertion matchers. These assertions help you confirm the methods are called precisely as intended.

When the test typed the username and the password, we used @testing-library/cypress command findByLabelText.

The Login component does have good testing attributes on those input fields though:

Thus we can let Cypress pick the selector for us using Selector Playground. It will inspect every DOM element we hover over to suggest the most precise Cypress built-in command to select that element. In our case, the Selector Playground suggest using the data-testid attribute.

The copied command cy.get('[data-testid=loginForm-username]') can be pasted directly into the spec file, and then we need to add .type() command.

The final component we are going to test renders the list of pizza toppings. If the list of topics is passed via a prop, the test is simple.

But what if the component fetches the list of toppings from a remote REST API? Let's look at the RemotePizza component

Let's write component tests confirming the fetched pizza toppings are displayed correctly. We can take several approaches to this.

The component allows passing the fetcher function via a prop. Thus we can pass a stub like before 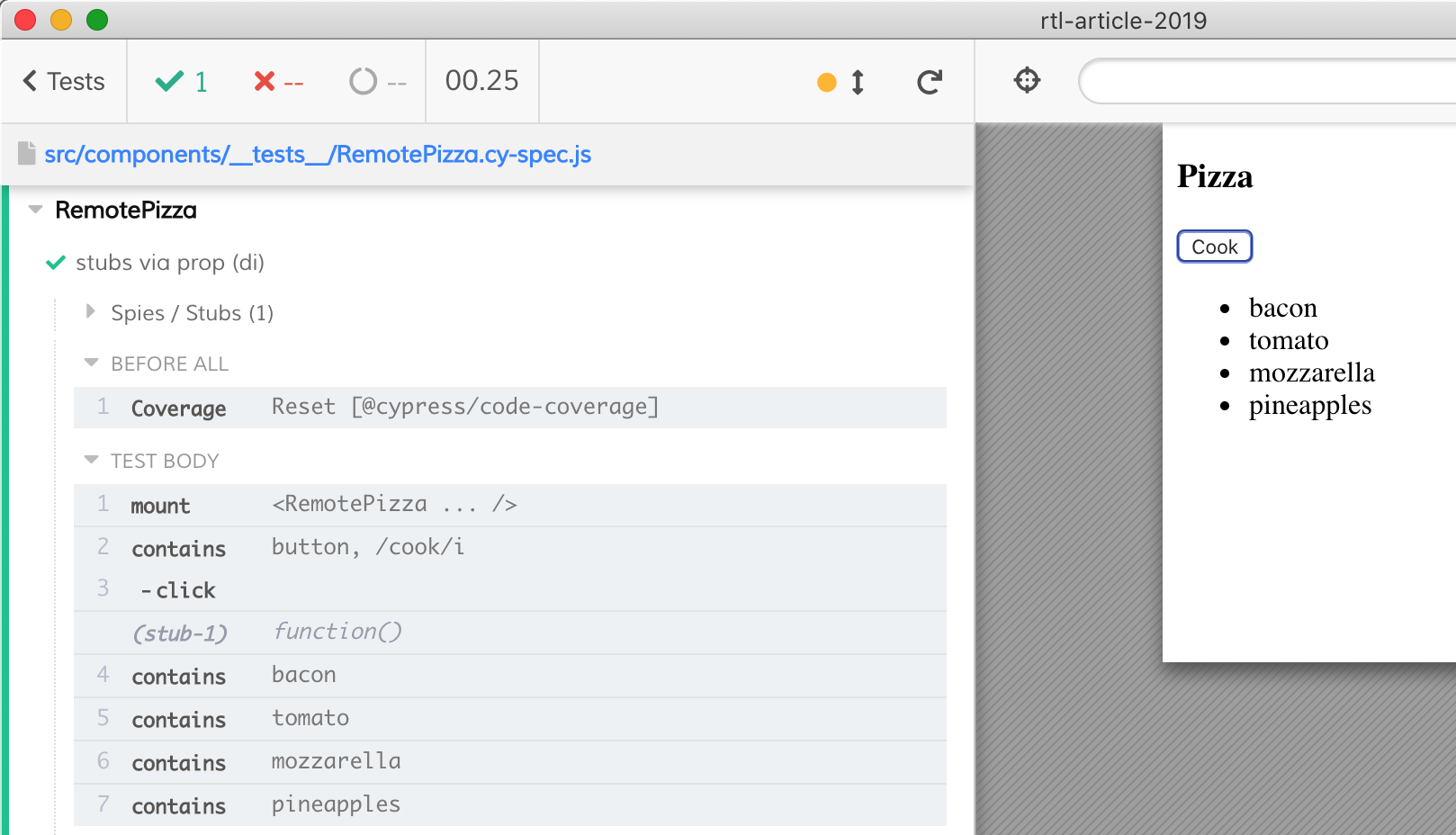 How does our component behave when the remote server responds after a delay? Let's pass a stub that resolves after one second delay using the Bluebird Promise library bundled with Cypress.

The test passes just fine - but it shows the need for some kind of loading indicator. Our users would not know what is happening while the toppings are being fetched.

Our test stubs the method RemotePizza.defaultProps 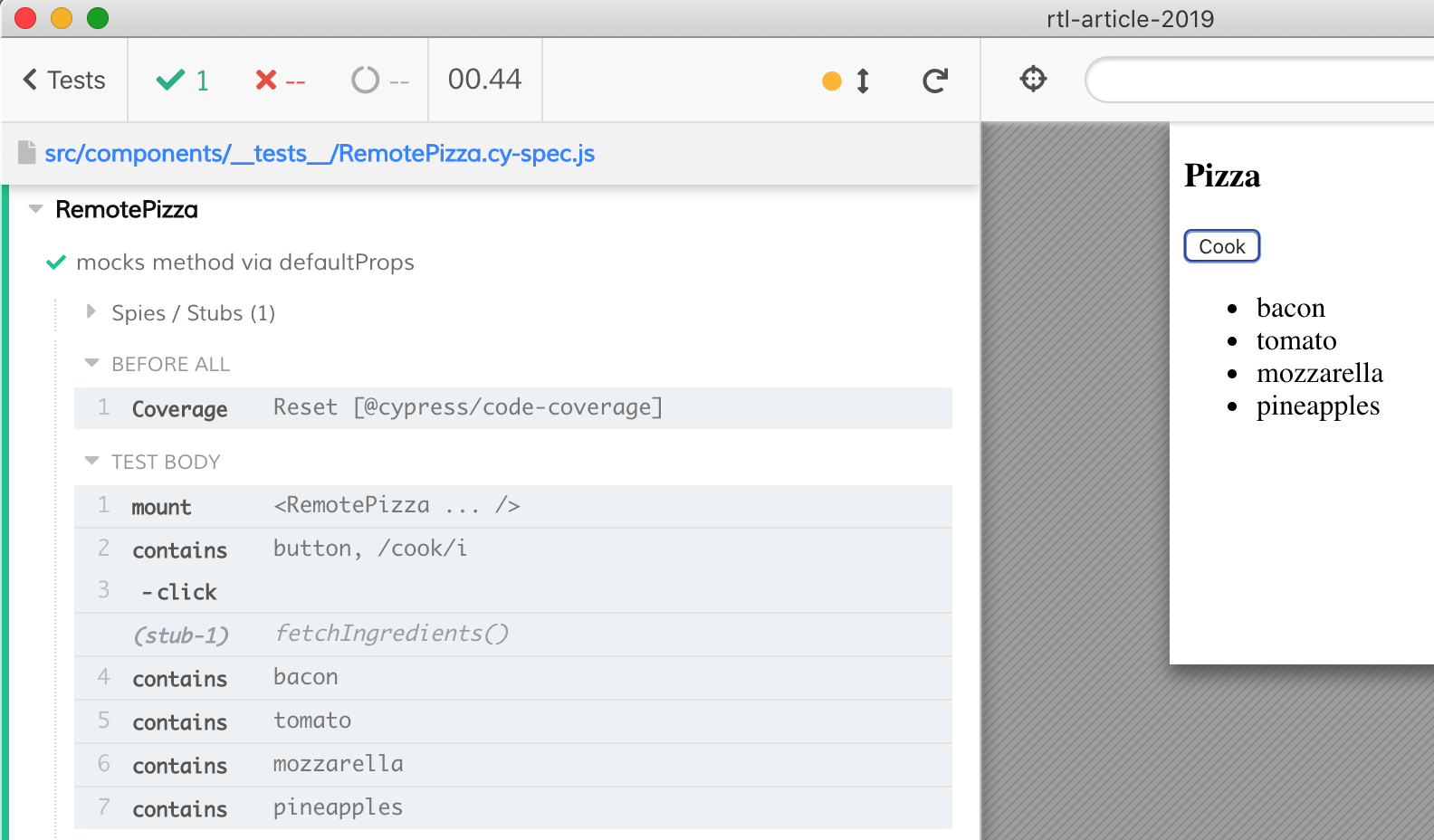 Our RemotePizza component imports the default fetcher from the services module.

In Cypress we can mock the fetchIngredients import using the included Sinon cy.stub just like before.

To mock a named ES6 module import, we import the entire module using wildcard syntax, which gives us an object. Then we stub the method of that object, just like we did when stubbing method fetchIngredients of the object RemotePizza.defaultProps. 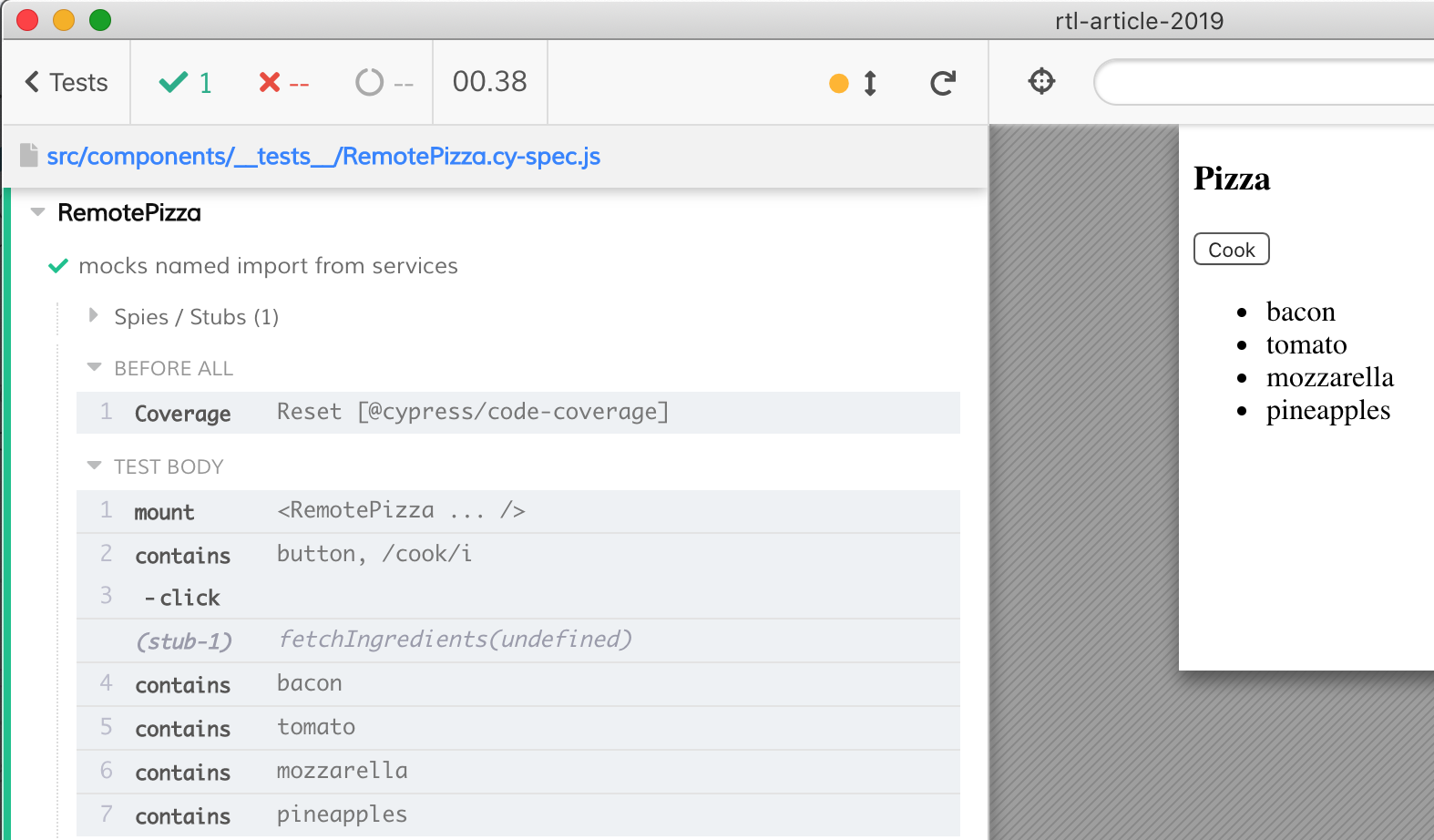 Note that all Cypress spies and stubs created during the test are reset automatically, thus you do not have to reset them manually.

The test passes and we can see the Ajax request information in the ROUTES table of the Command Log. 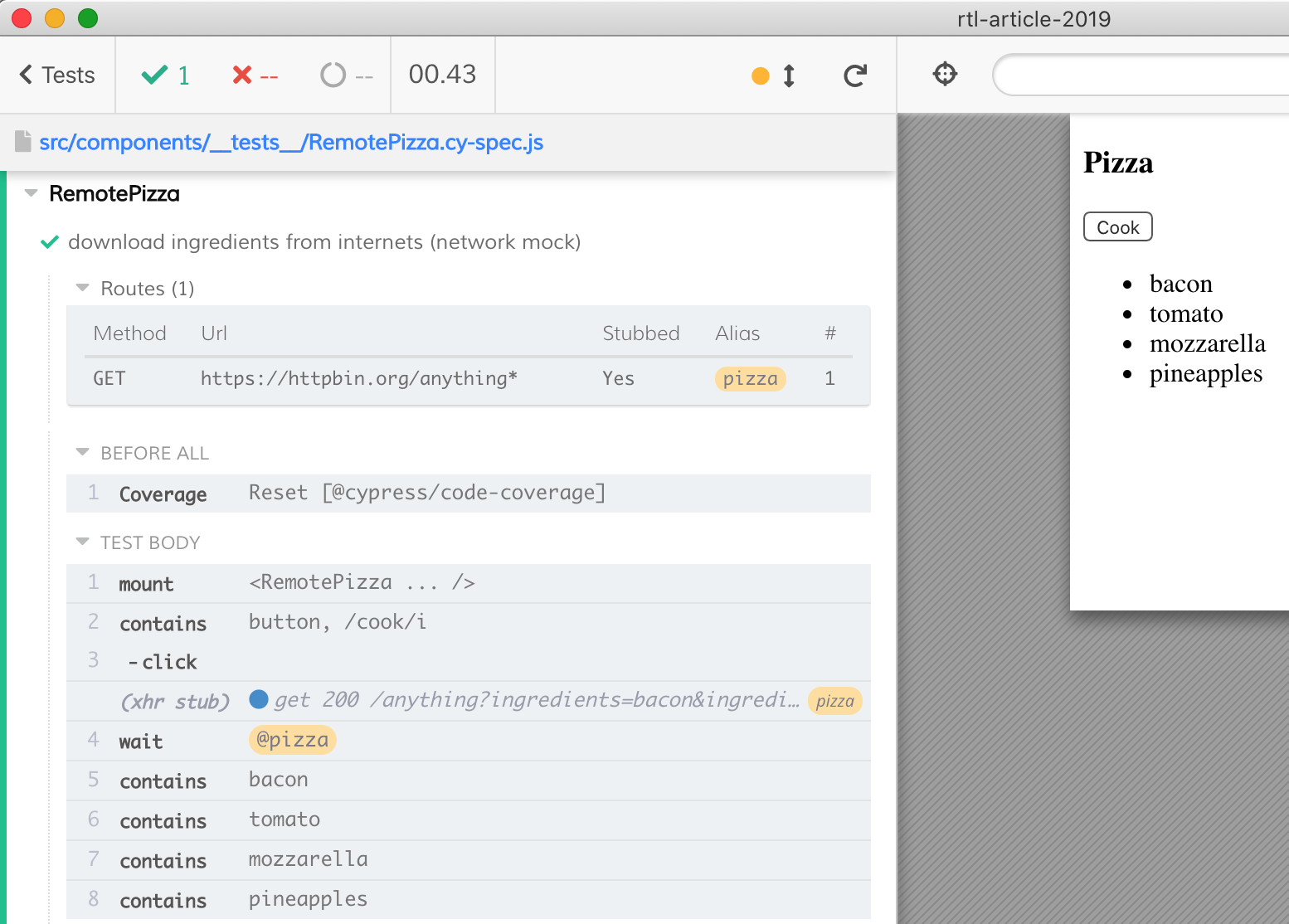 We can also add a delay to the network response to simulate a slow server response:

Using cy.route we can spy or stub network requests made by the component with ease.

You can fine the source code and the spec files described in this blog post in repo rtl-article-2019.