I have been talking about framework-specific component testing for ages now. I have even coded a bunch of adaptors like cypress-react-unit-test, cypress-vue-unit-test and others, that allow mounting individual components into Cypress and run them as full-fledged mini-web applications. While the initial solution was technically ok, due to the way Cypress works it has a long list of issues: React Hooks do not work, styles are often lost, etc.

I am excited to say that we have an experimental support for a new way of binding test code in Cypress v4.5.0 that seems to solve all known problems. In this blog post I will show how it might work, once we release it.

I will take a nice Todo application from blog post How To Build a React To-Do App with React Hooks as the starting point. You can see this application yourself at its original https://codesandbox.io/s/oj3qm2zq06 URL. 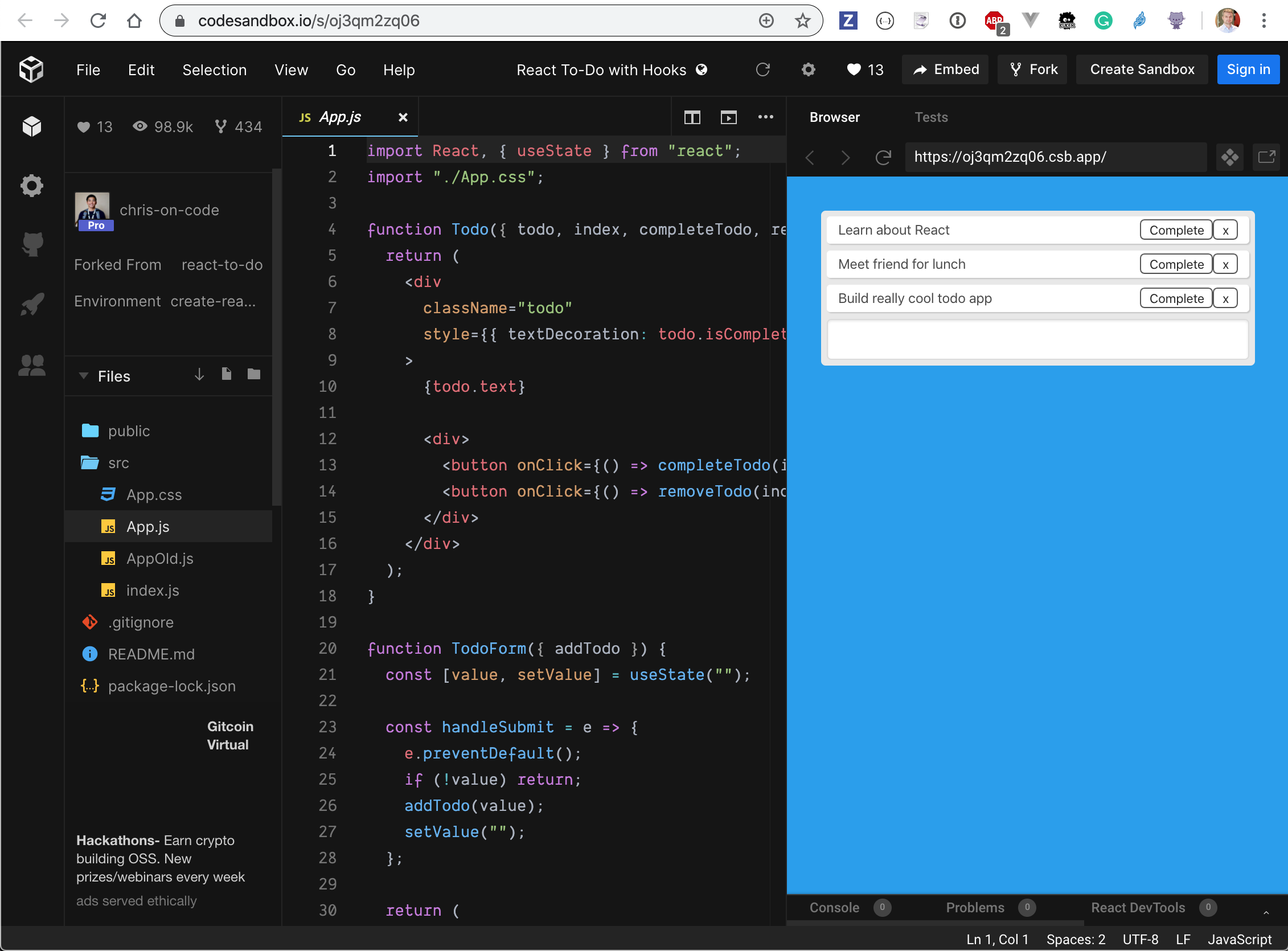 I have downloaded the code from the sandbox to my repo https://github.com/bahmutov/react-todo-with-hooks; it has a CSS file and two JS files - very compact example.

The application is bundled and served using react-scripts which is often used to serve modern React applications.

I have noticed that the application allows us to mark Todo items as completed, but it never allows to "undo" completing an item. Once the task is done, there is no way to get it back to the initial incomplete state.

I would like to change "complete" an item into "toggle" an item. But I don't know the code of the application, so it is dangerous to simply start hacking. We need tests first; and we want to make sure we test the entire application before changing its behavior.

The test runs and passes

Did we test all code paths in our application? The simplest way for us to find out is to measure how much of the application's code was executed by running this one e2e test. We can follow the Cypress Code Coverage Guide to set up coverage reporting.

When we start the application, we preload this module first - and we will have application's code instrumented.

This plugin should be loaded from the support and plugins files

Start Cypress again and run the test. You see "Saving coverage from ..." and "Coverage report" messages at the end of the run. 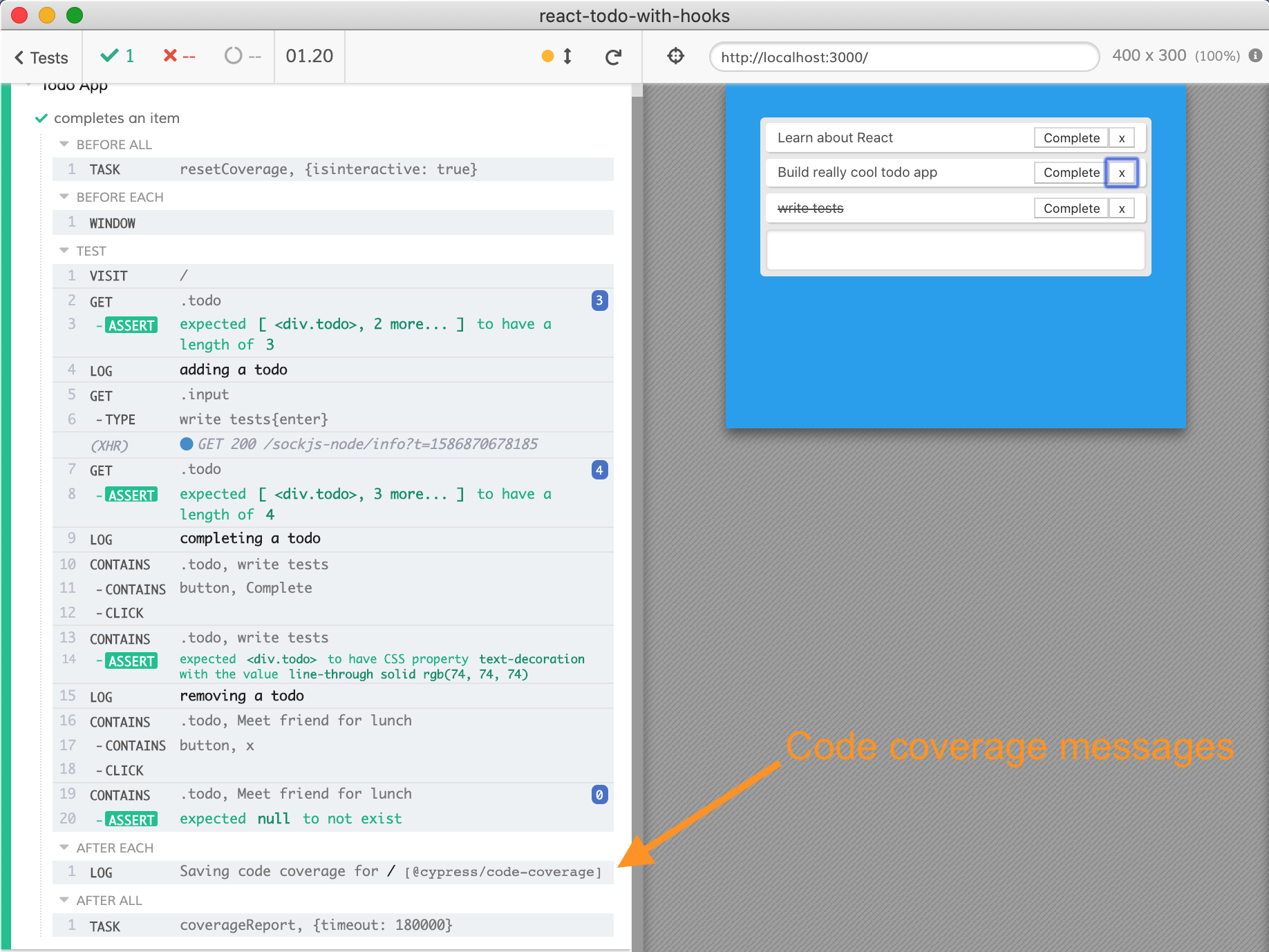 In the folder coverage you will find the report in several formats, let's open the static HTML one

Our single end-to-end test was very effective at covering almost all lines of the application.

We can drill down into individual file coverage. 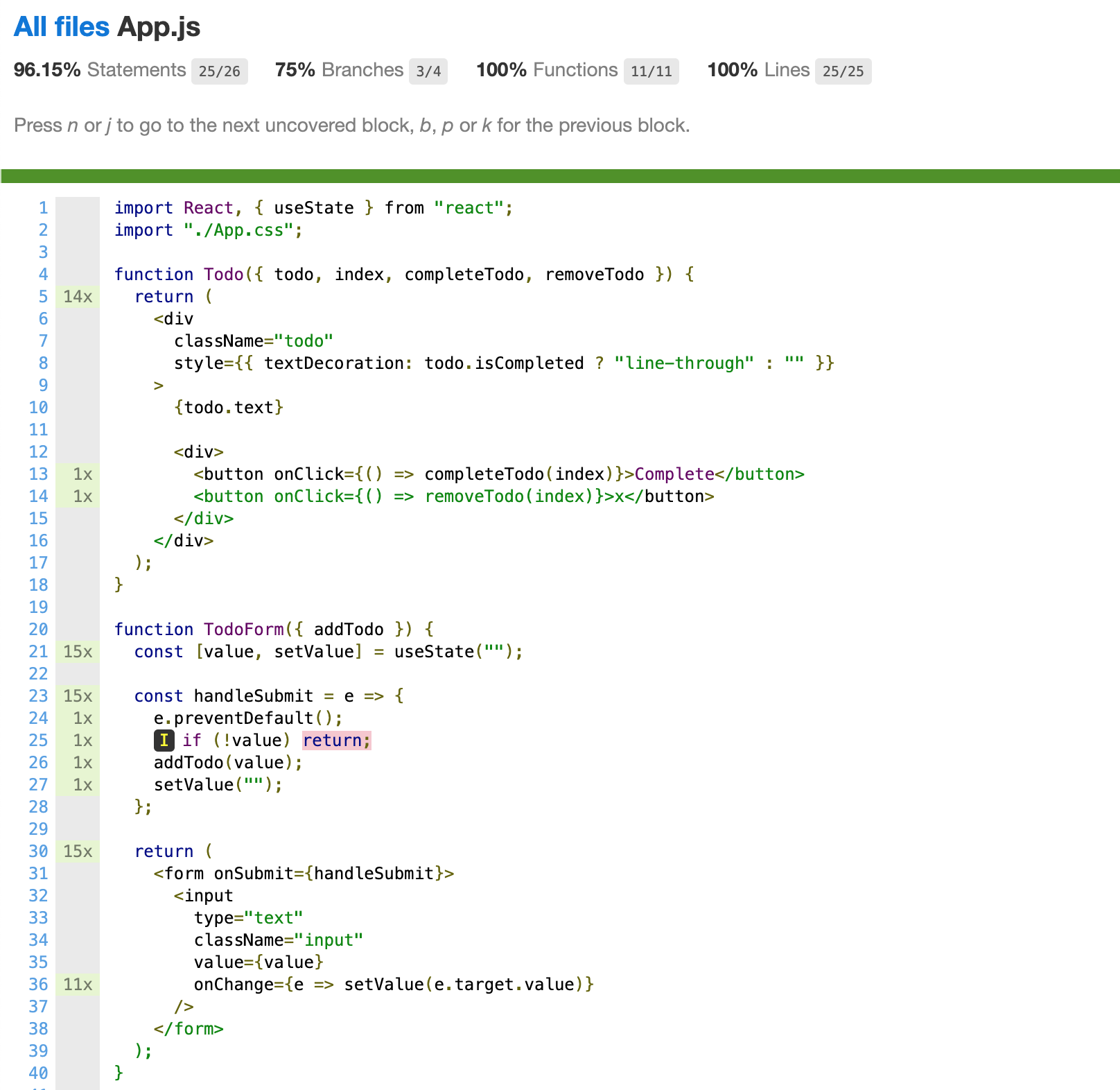 The line we missed is inside TodoForm component, and it is kind of hard to confirm its behavior. We can easily write an end-to-end test that tries to "enter" empty input.

BUT it does not confirm the property addTodo is not called at all. We really want to test the component, not the entire application.

Unlike end-to-end tests, the component specs must be bundled the same way as the application code is. Thus we have added multiple plugins helpers that find and use the bundling options your application is using. In this case, Cypress will find the Webpack config from react-scripts module and will use it.

The component test directly imports TodoForm from the application code and mounts it using mount method from the cypress-react-unit-test. Once the component is mounted, it runs as a "mini" web application. We can use normal Cypress commands against it! Think of mount as cy.visit for components.

You can see the component run inside Cypress iframe (where a regular web application usually runs during end-to-end test). You can interact with the component, inspect it using DevTools, see how it behaves using time-traveling debugger - all Cypress benefits apply both to end-to-end tests and to component tests. Plus code coverage is included by default!

When mounting a component, you might want to apply additional styles to make it look the same as in real application. The mount command options let you specify inline style, CSS filename or external stylesheets. For example, here is the Todo component test.

The buttons looks "normal", but the entire component still does not look the same - because our styles come from src/App.css and require certain DOM structure. Let's recreate the structure and load additional CSS file in our test.

As I argued before - a component test is just a unit test where props are inputs and side effects like DOM, network calls, etc are outputs. Let's confirm that Todo component calls the removeTodo prop when the user clicks "Remove" button. 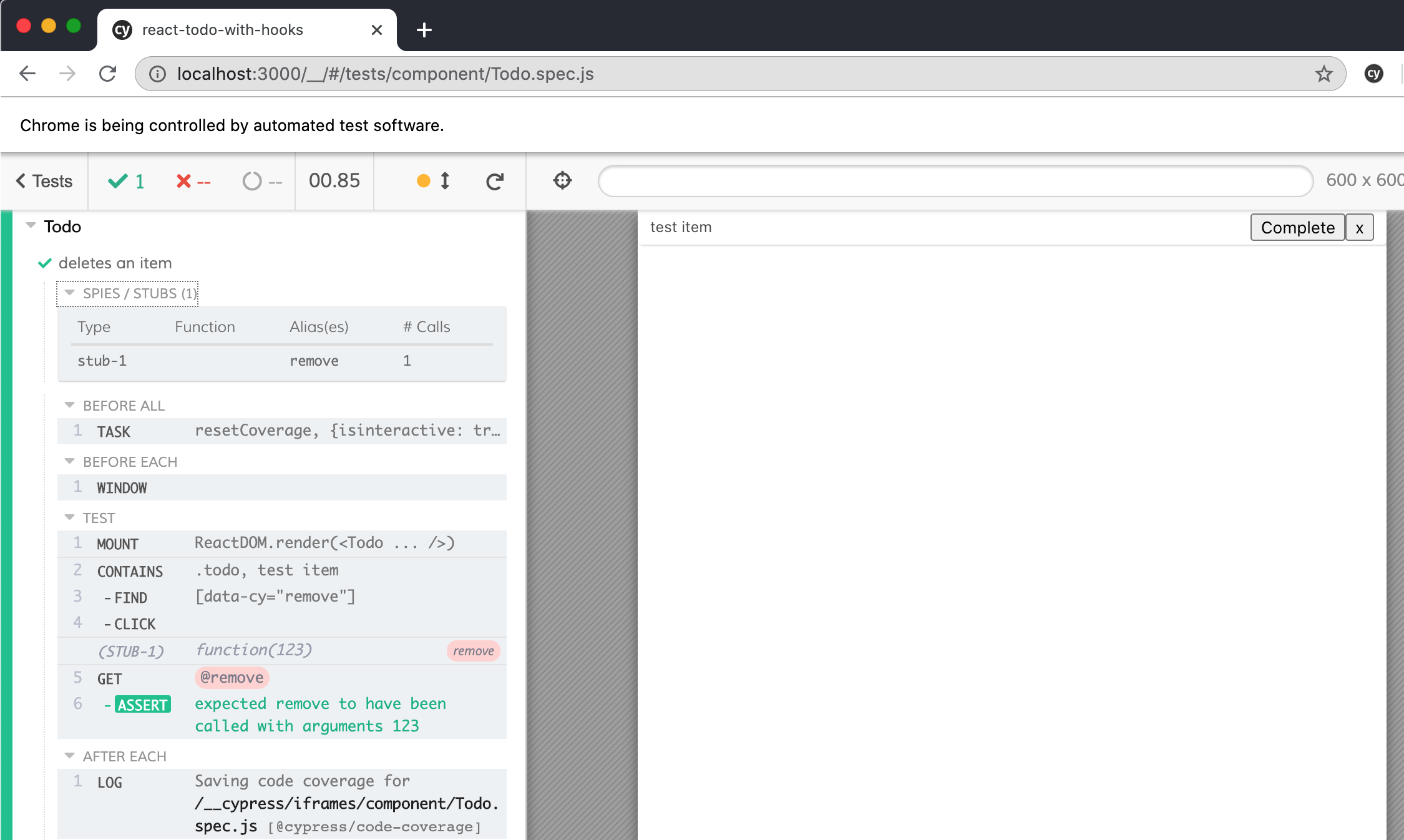 Notice how we directly passed a stub into the component as a property - because the component "lives" right inside the spec. By having direct access to the component, you can do amazing things - like combine mock and live GraphQL calls, see bahmutov/test-apollo

Components all the way down

Component testing can work with components of any size. We have tested TodoForm and Todo components, let's test the top-level App component.

The test runs and looks ... almost like the complete application!

Finally, while we are testing components, let's test a few functions using unit tests. While this was always possible in Cypress, component testing mounting mode makes it much closer to testing the real code, because bundling the component spec is done using your application's settings.

From the smallest units of code to the largest components - you control the scale of what you want to test.

In my completely biased personal opinion, Cypress component testing using the real browser has many advantages

We have forked a number of 3rd party projects to confirm component testing works.

We have already released new versions of cypress-react-unit-test and cypress-vue-unit-test and plan to upgrade other framework adaptors (Angular, Svelte, etc) to be compatible with experimentalComponentTesting: true mode.

Special thank you 👏 to Dmitriy Kovalenko @dmtrKovalenko for making Cypress Test Runner and React adaptor work through these PRs #5923 and #108. They have removed the technical limitations that prevented React Hooks, component styles and other features from working correctly inside the component tests.

Another big shout out goes to Jessica Sachs @_JessicaSachs for working on component testing support in cypress-vue-unit-test 👏.