Let's play with a personal site made using 11ty. You can find the source code in the repo bahmutov/eleventy-example. We start with a basic page in the README.md file.

And start the local site

The static page does not look like much - but the generator is fast and simple to use.

Tip: by default eleventy --start serves the page at port 8080. If that port is busy, it automatically serves at the next available port, in this case the site was serves at port 8081.

We need the entire world to see our awesome site. Let's deploy it using Vercel platform. I have created a new project and picked "11ty" application's default settings for the build command and output folder. 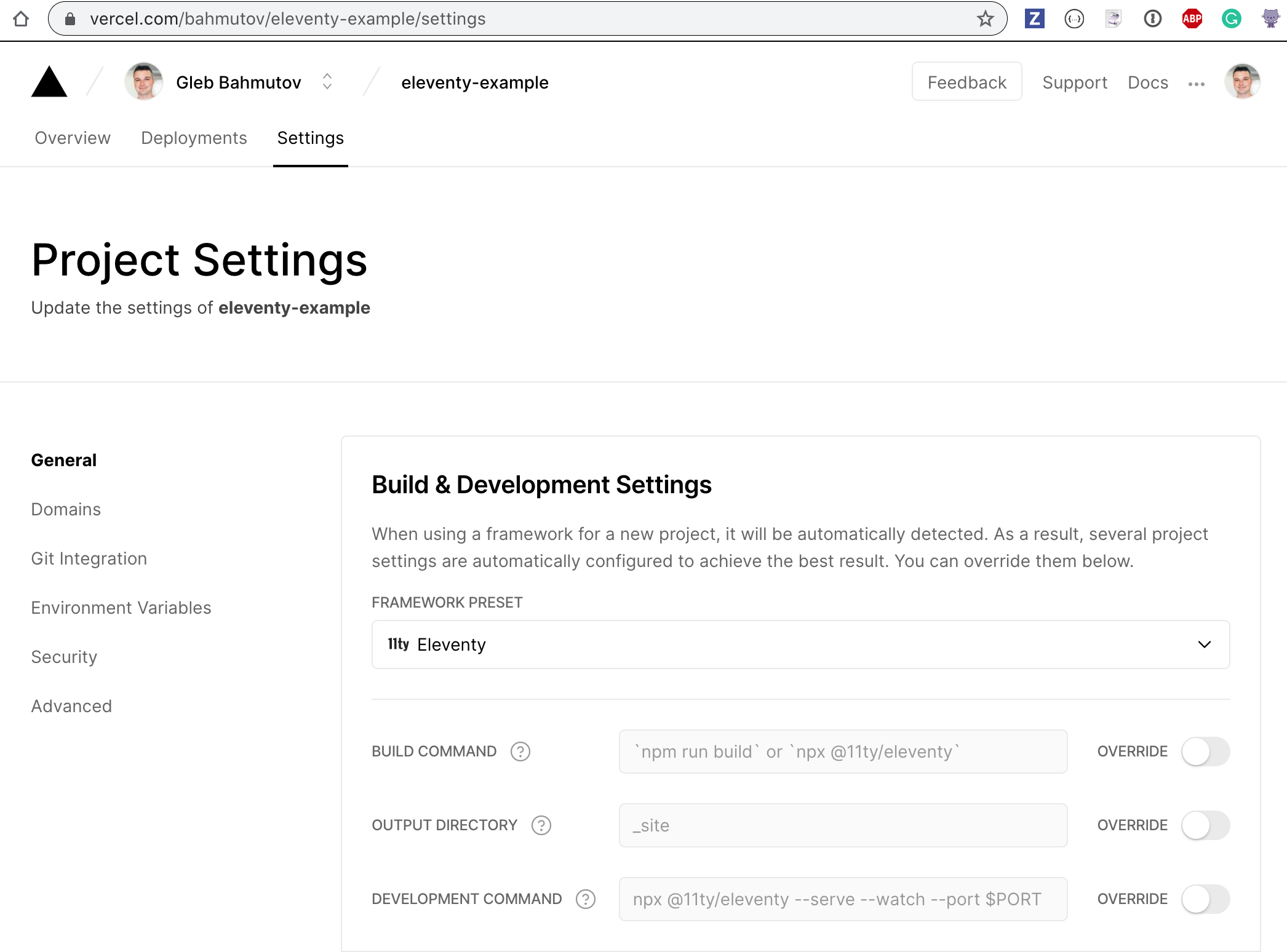 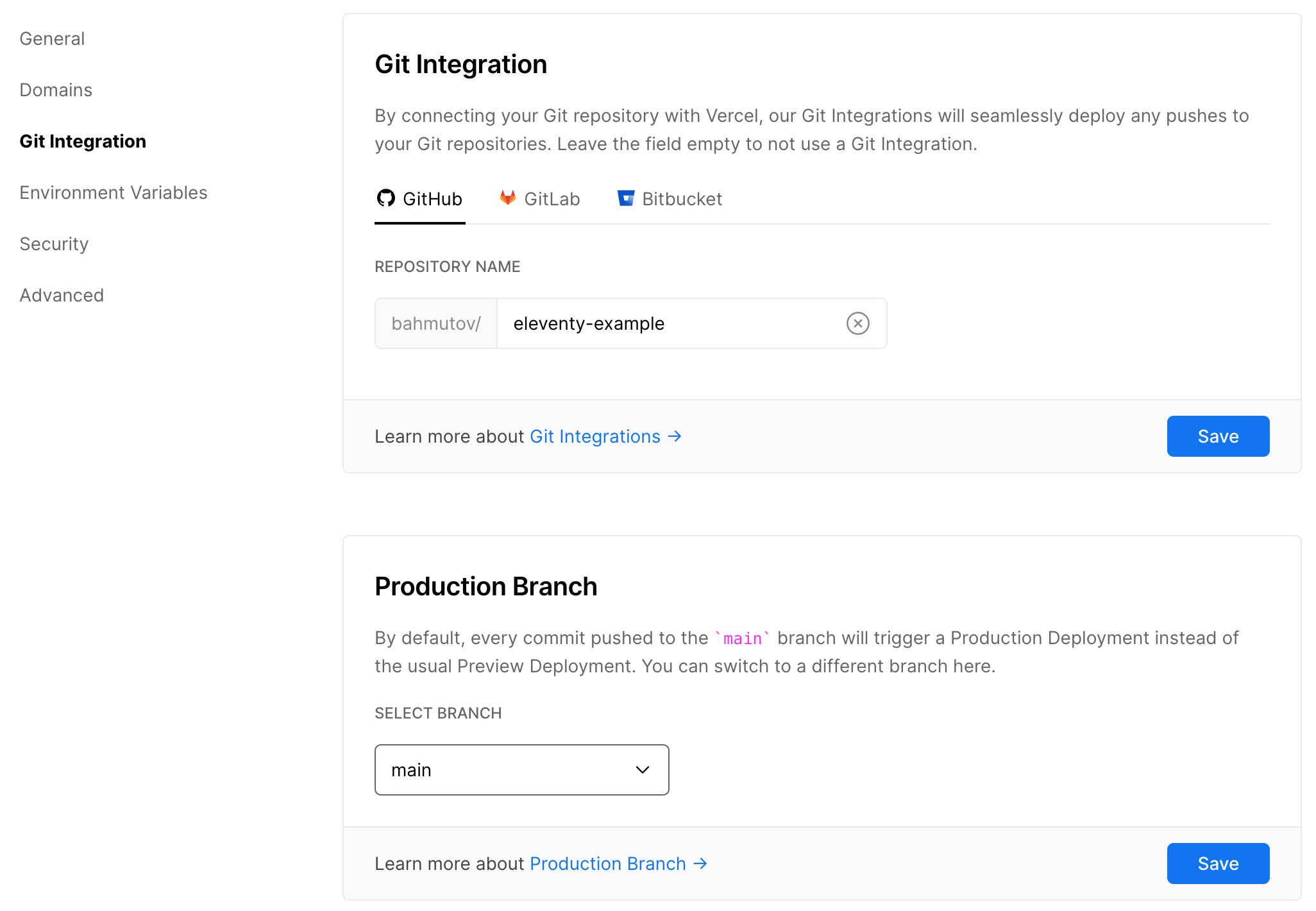 Every time we push a new commit to the main branch, the static site is built and deployed globally under a subdomain of vercel.app.

Here is the production site deployed from the main branch.

We probably want to deploy the top level index page as well, and navigate to the /README page. Let's throw a root index.html there

The navigation works: when the users clicks on the link, the browser goes to the /README page. When the user clicks the browser's "back" button, it navigates back to the index page.

I want to deploy the new index page - but I am not sure if the top level navigation is going to work with an actual domain (because I seriously doubt my programming skills). It would be a nice idea to deploy the full site to a temporary preview domain first, test it out, and if it works correctly, then merge the pull request to the main branch, which deploys to production.

I will create a new branch add-index-page and commit the new code there:

In my GitHub repository I have installed the Vercel GitHub App which automatically deploys every pull request. 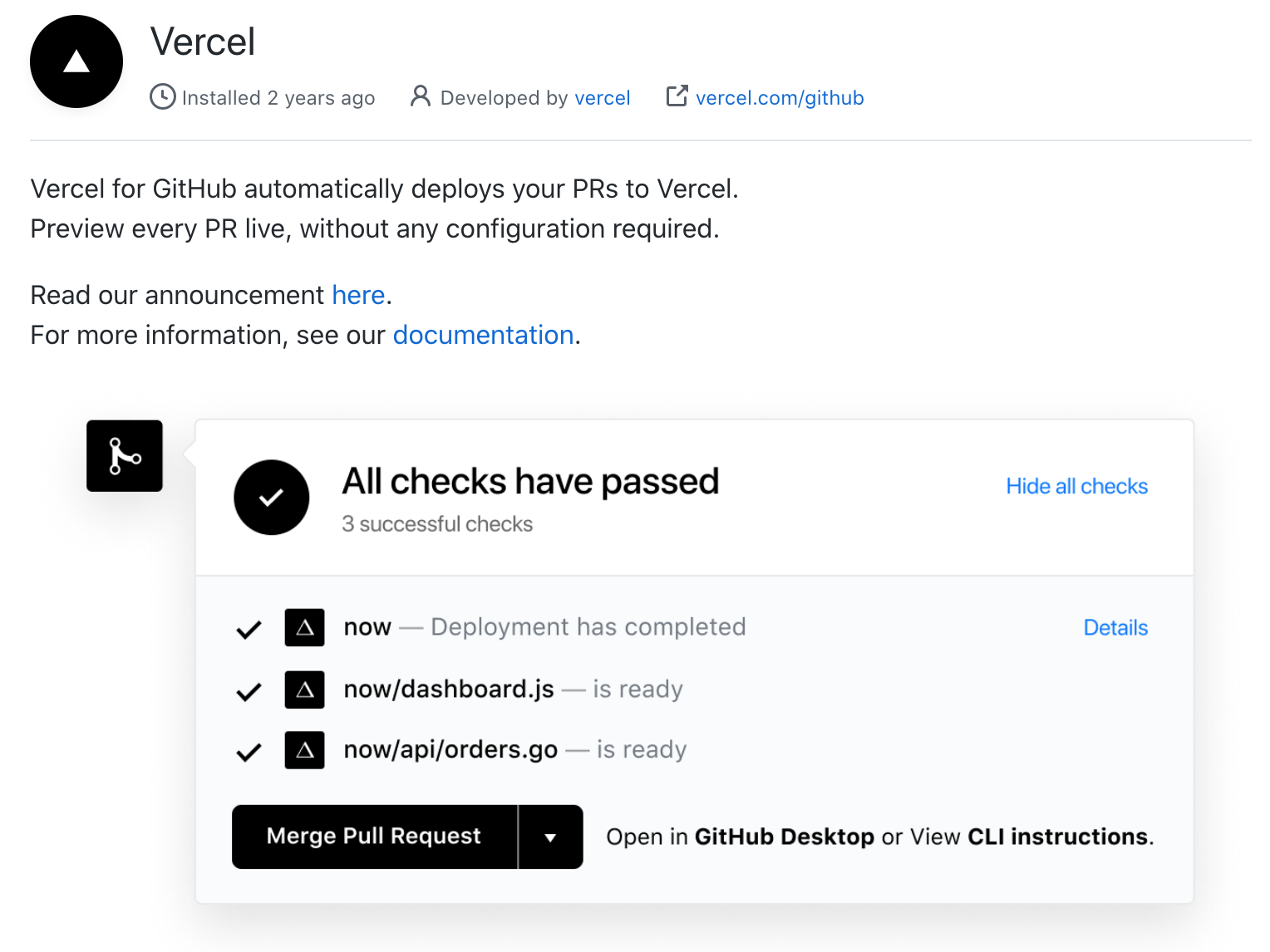 By pushing the new branch to the repository and opening a pull request #2 I trigger the deployment. The Vercel bot comments on the PR with the deployed URL 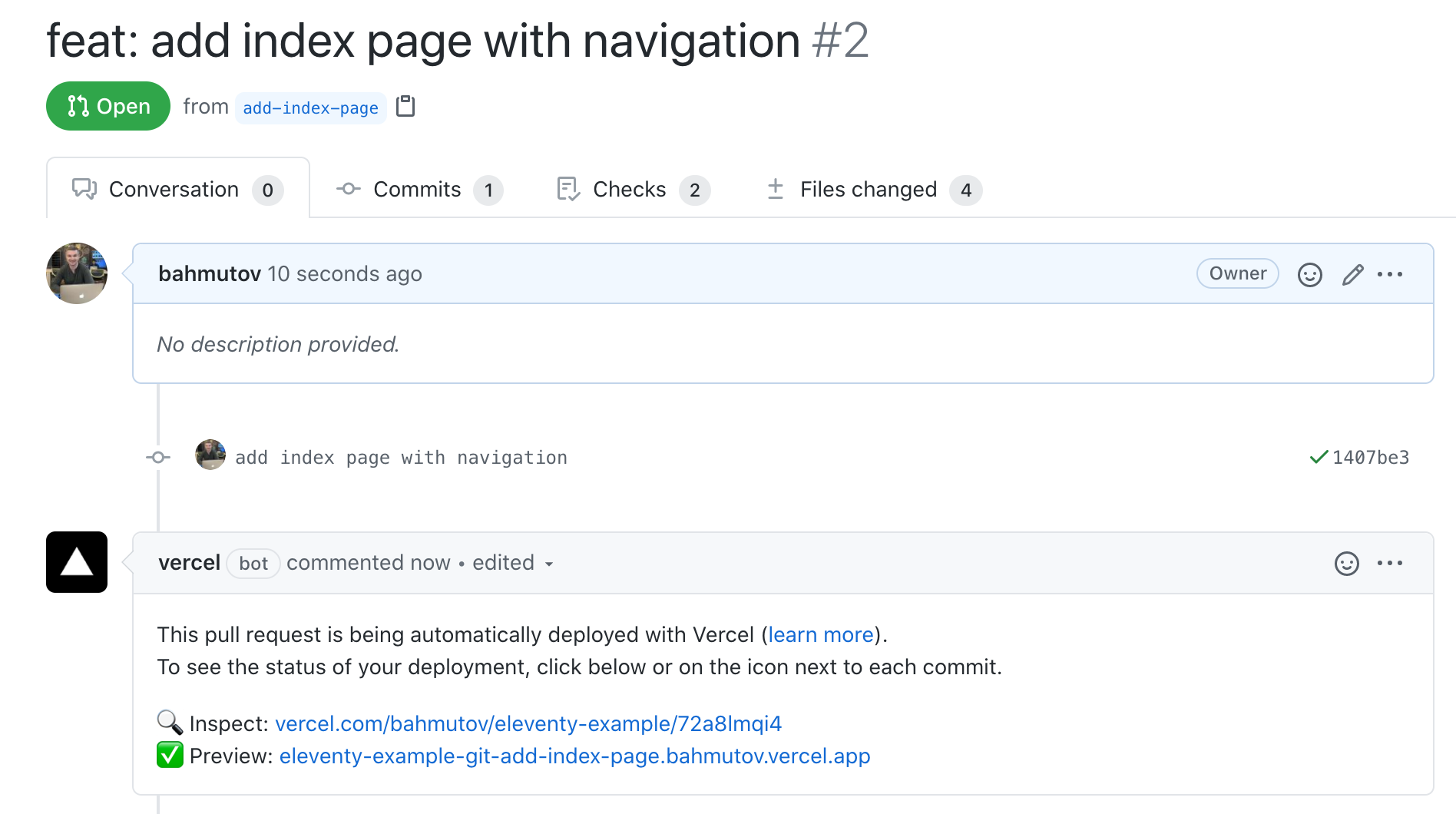 The PR preview URL https://eleventy-example-git-add-index-page.bahmutov.vercel.app/ is a concatenation of the project name "eleventy-example", the source type "git", the branch name "add-index-page", my user name "bahmutov", and the top level domain name "vercel.app". In addition, there is a unique preview URL for every commit. You can find these URLs at the Vercel deploy page.

If we push more commits to the branch add-index-page, the new deploys will get their new unique eleventy-example-<HASH>.vercel.app URLs, while the latest branch preview will still have the top level <project>-git-<branch>-<username>.vercel.app URL.

We have tried the PR preview manually, but a better idea to prevent bugs in the deployed web applications is to write automated end-to-end tests using Cypress. Let's install Cypress and write a test in our pull request.

When we ran the site locally, we tested it at the localhost:8080. Let's put this setting into cypress.json file.

Our spec file will perform what we have done manually - it will navigate by using the link to the /README page and back.

Start Cypress with npx cypress open while the application is running and observe the test passing for the right reason. Hover over each command to observe the site's DOM snapshot and how it changed in response to the anchor click or cy.go('back') command.

Tip: read how to write flake-free Cypress tests when navigating from page to page in the blog post When Can The Test Navigate?.

We ran the above test locally. Let's run the same test automatically against the deployed preview URL. Luckily for us, Vercel for GitHub dispatches deployment events to GitHub, and we can write a GitHub Action that would execute in response to this event. Let's first simply print the event object to see if it has the target preview URL to test.

Notice that the deployment_status is not listed in the PR checks - they are "hidden" or overwritten by the "deployment" event, which to me seems like a bad user interface. 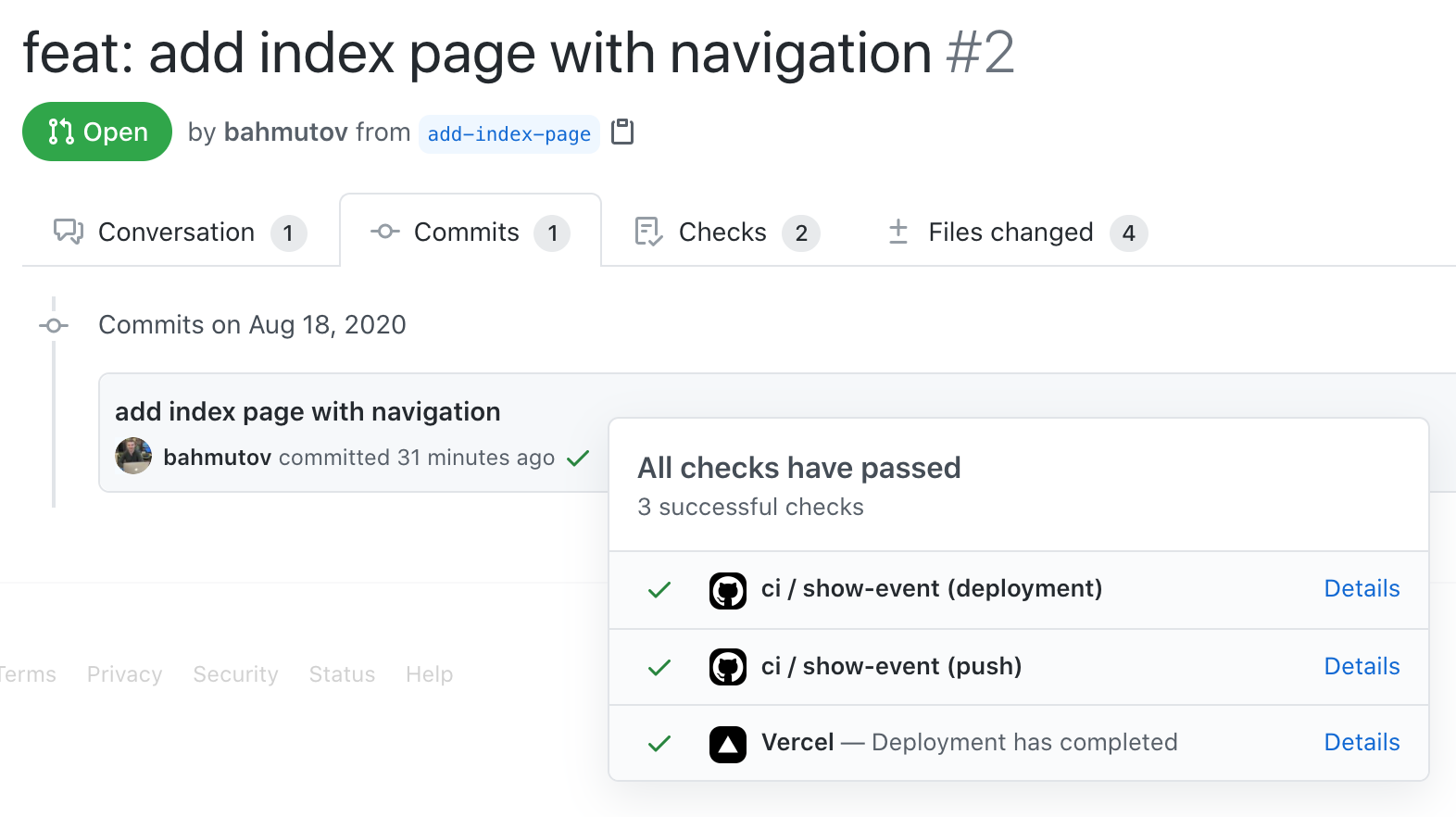 Instead, we need to look at the "Actions" tab to see the ci workflows run, and by clicking inside figure out they ran triggered by the deployment_status events.

The second deployment_status event inside the GitHub CI action has status

We can limit the GitHub Action to only run a job when an expression is true. In our case we want to run end-to-end tests only after successful deploy - and we want to pass the "target_url" as baseUrl parameter. We can pass the base url using the CYPRESS_BASE_URL environment variable. Here is our updated workflow file

When we push the commit, we can see the CI jobs skipped - except for the last job.

I love requiring certain test jobs to pass before a pull request can be merged. Thus I set up protected branches with e2e job required to allow merging. 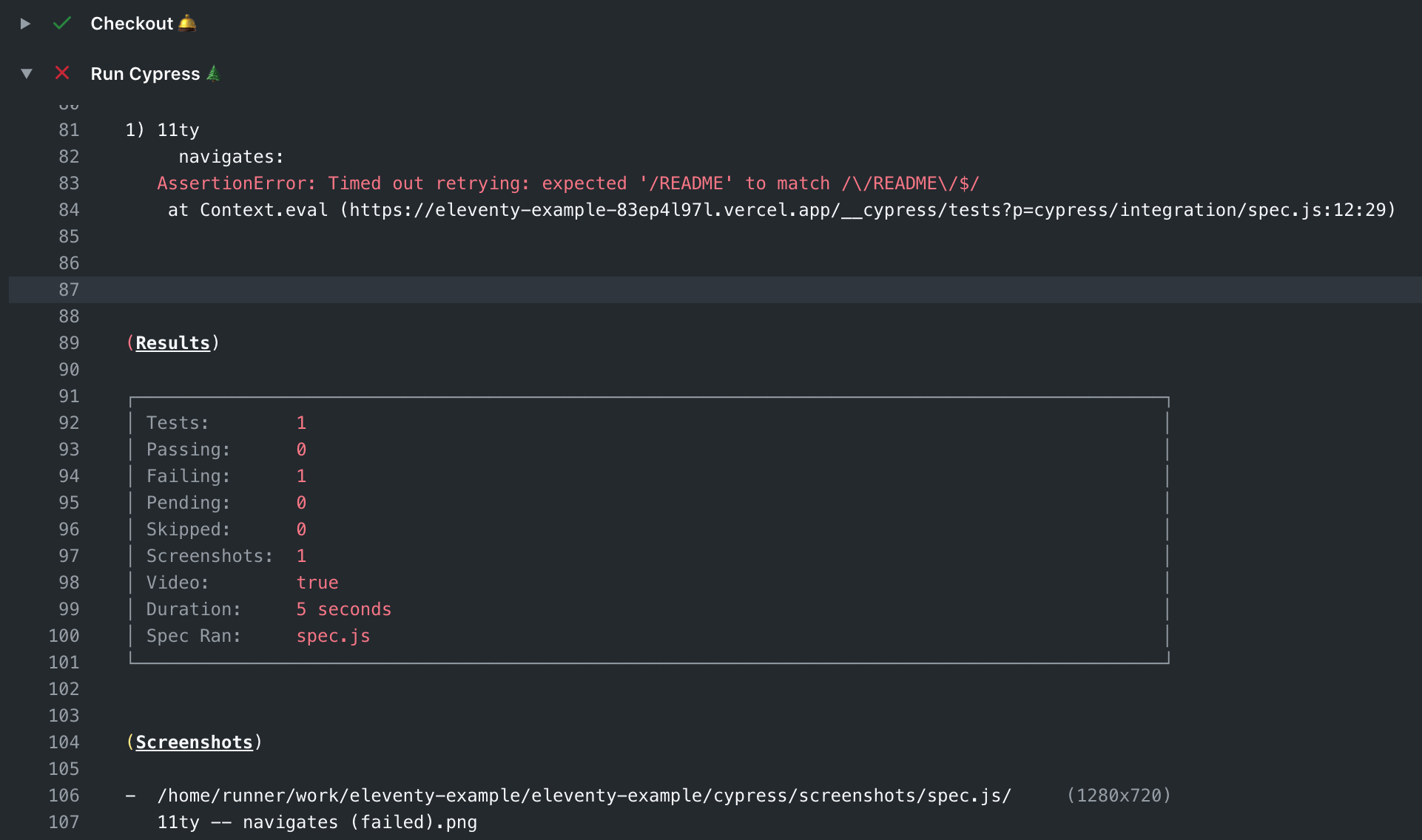 Tip: debugging realistic test failures is much simpler when you have access to the screenshots and test run videos, I recommend using Cypress Dashboard to record the test artifacts from any CI.

Hmm, seems Vercel does not add a trailing slash when serving the production version of the code, while 11ty running locally does add one. 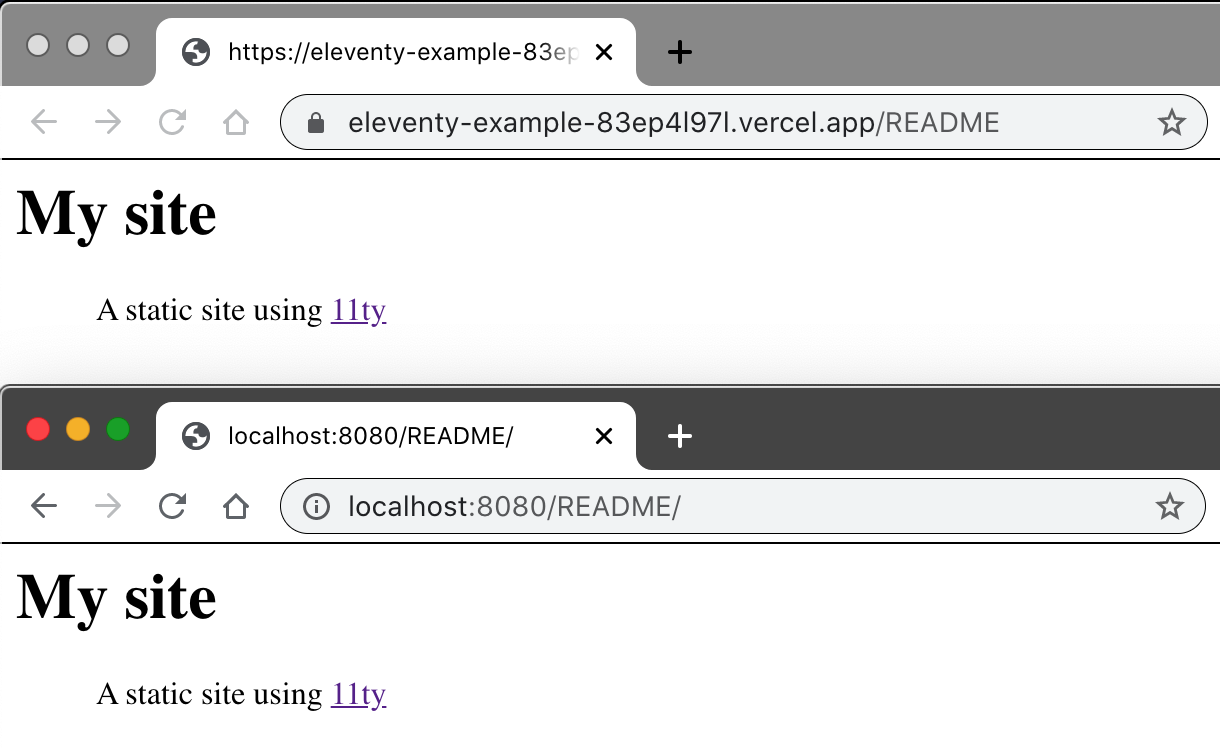 Testing against the deployed preview URLs just showed its usefulness. Let's update the test to be less strict.

Perfect. The test passes locally and against the preview URL.

Once the checks are green, I am confident and merge the pull request into the main branch. Vercel then deploys the production site. I can also remove extra CI events and only run the GitHub workflow on successful deployment. To install, cache and run Cypress we can use Cypress GitHub Action:

In the previous workflow file we used the github.event.deployment_status.target_url value. The github.event contains lots of other properties. We can also print the GitHub environment variables by using @bahmutov/print-env. Then we get things like the branch name that are not present in the github.event object.

For example pull request deploy we will see print out like this:

Which prints for branch print-event the following:

There is one more detail that GitHub gets wrong when running tests on deployment_status event. It seems to be confused about which commit is tested, so it never reports the status back to the Pull Request. For example in #3 we see a pending check.

You can see the example run in PR #4. The check "e2e" matches the required check name, thus the pull request is all green.

When we look at the Action steps, we can see the "Post success" step ran, while the "Post failure" step was skipped. 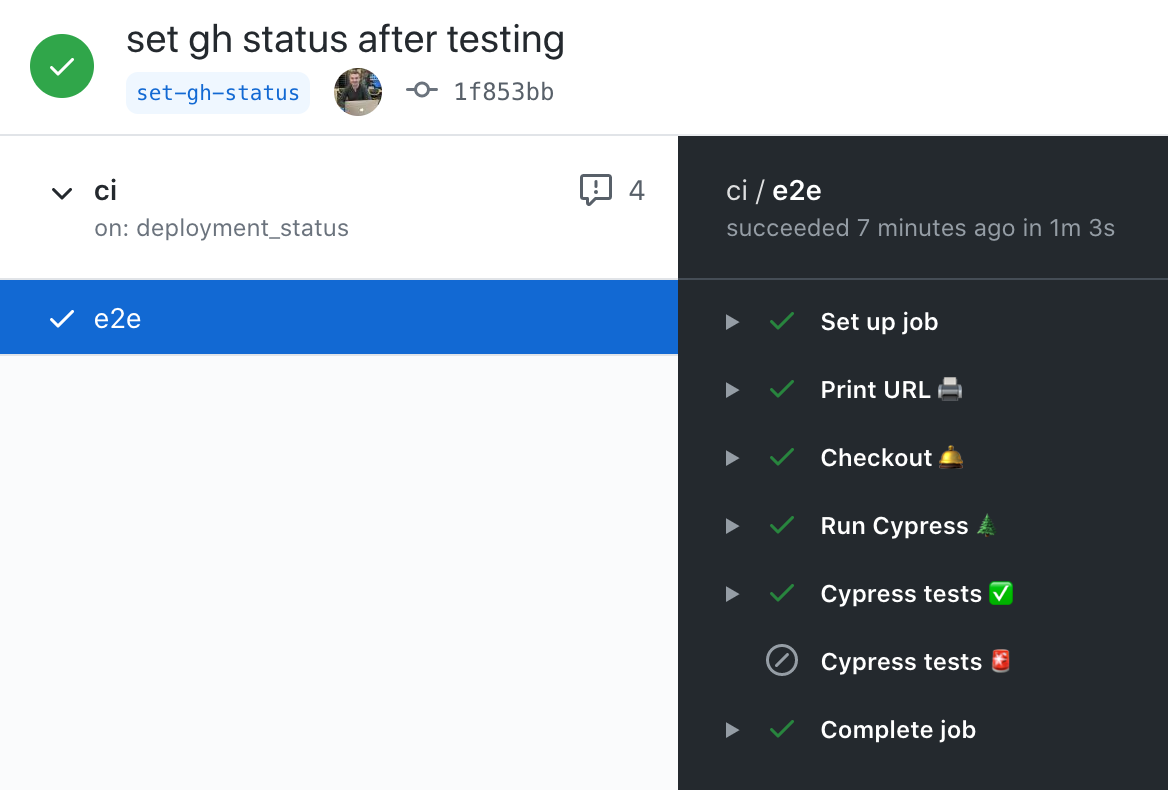 This creates the little "Details" link on the right.

I have mentioned before that every Cypress run generates a video, and every failed Cypress test automatically saves the screenshot of the failure. You can store these test artifacts on GitHub, or send them to the Cypress Dashboard where they can be easily viewed. Let's set up our project for recording.

In the Cypress Desktop GUI select the "Runs" tab. 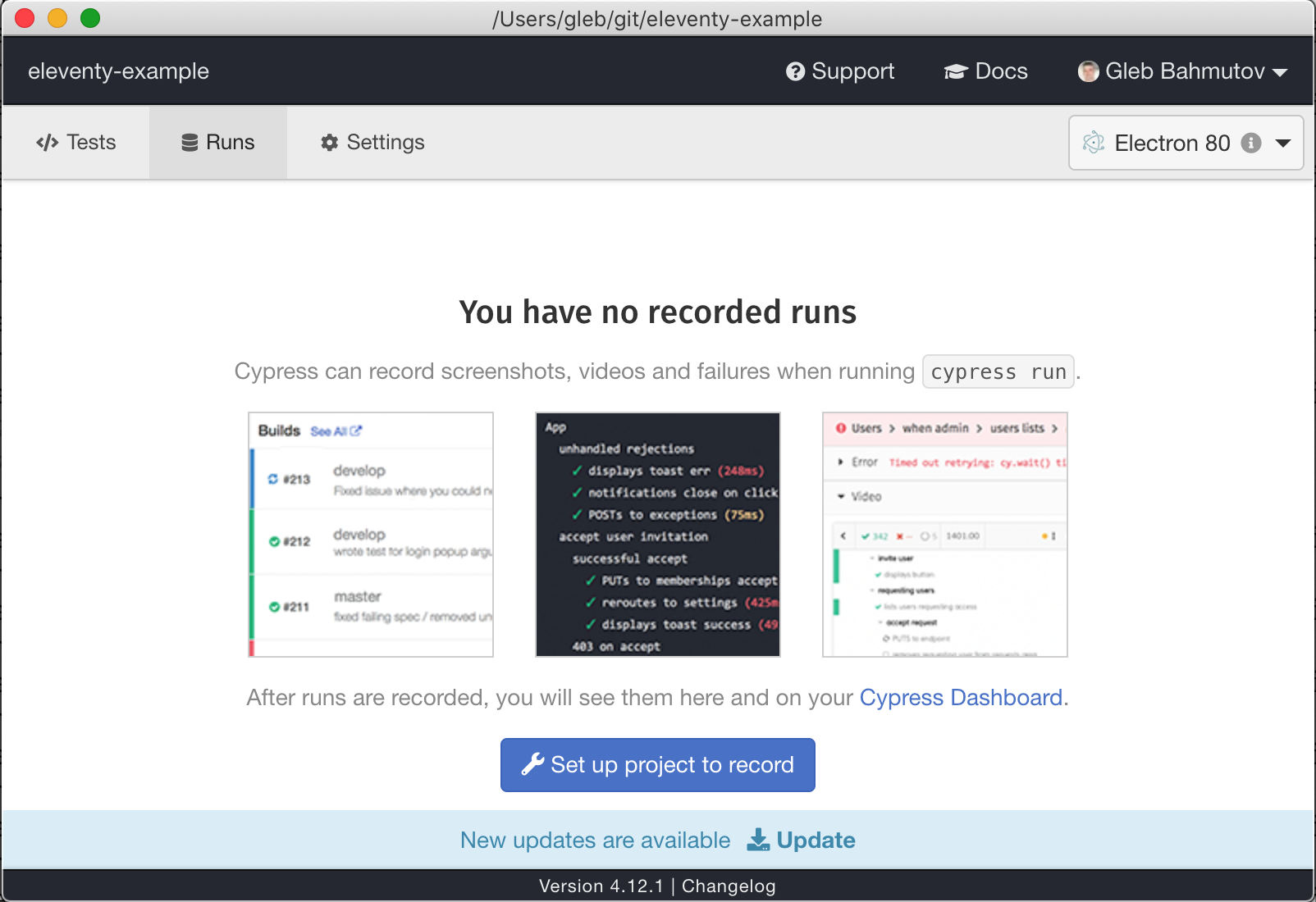 I will place the "eleventy-example" project under my personal "Gleb OSS" organization that has the Cypress Open Source Software billing plan. The test recordings will be public - everyone should be able to see them. 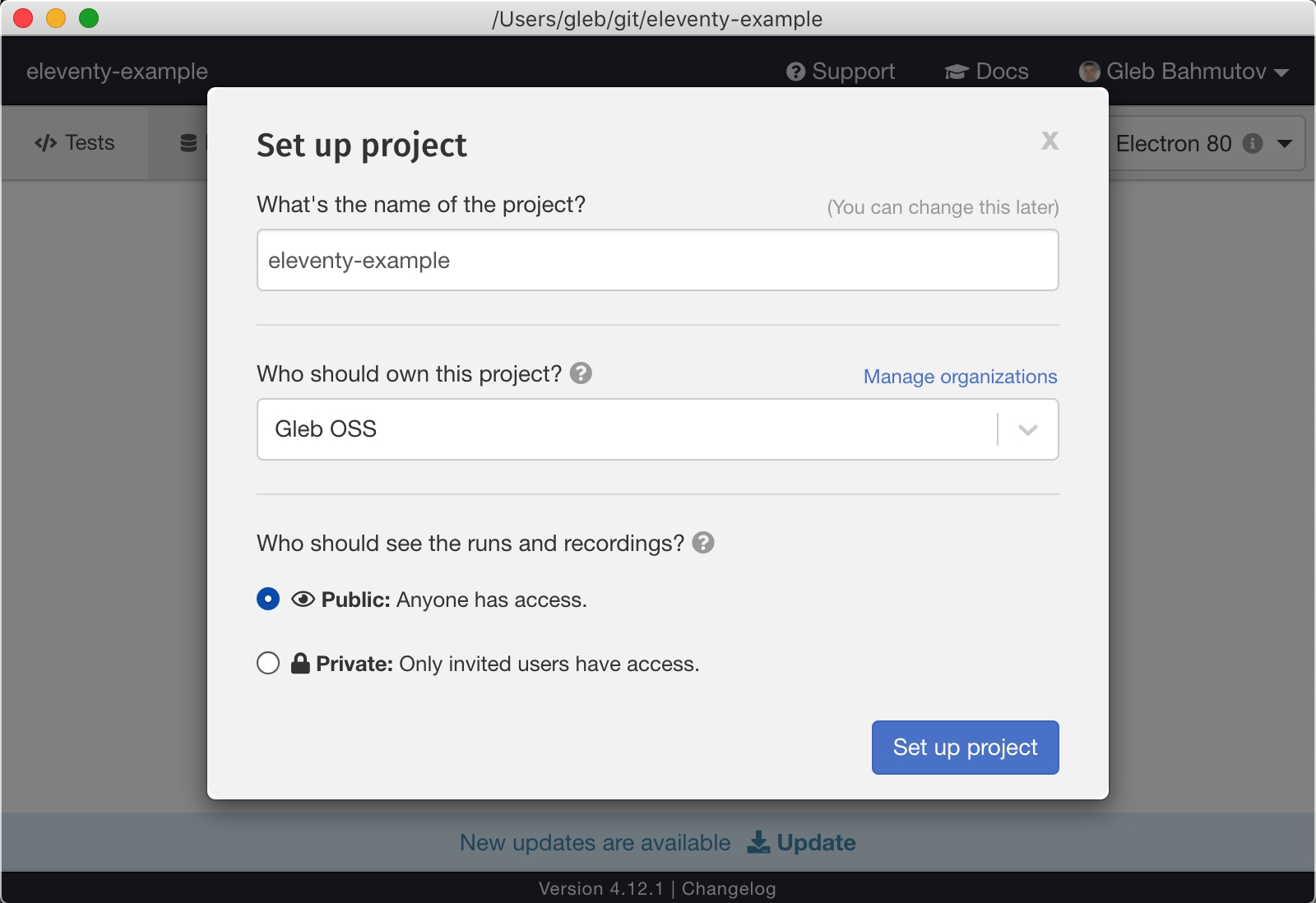 Once I click "Set up project" button, its project id will be added to the cypress.json file and the recording key is shown. Please keep this key private. 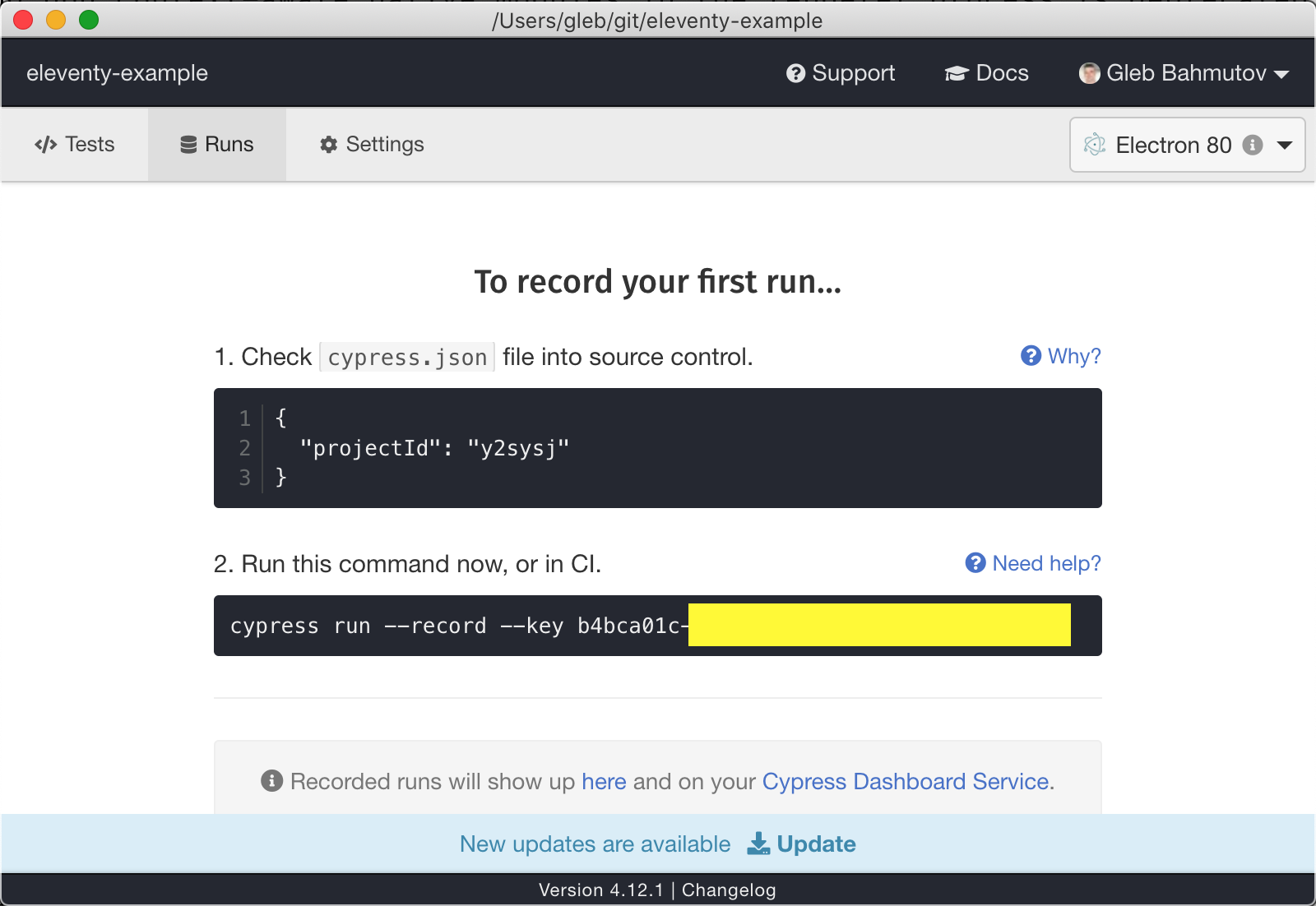 I will set the recording key as a GitHub Action Secret in my repository. 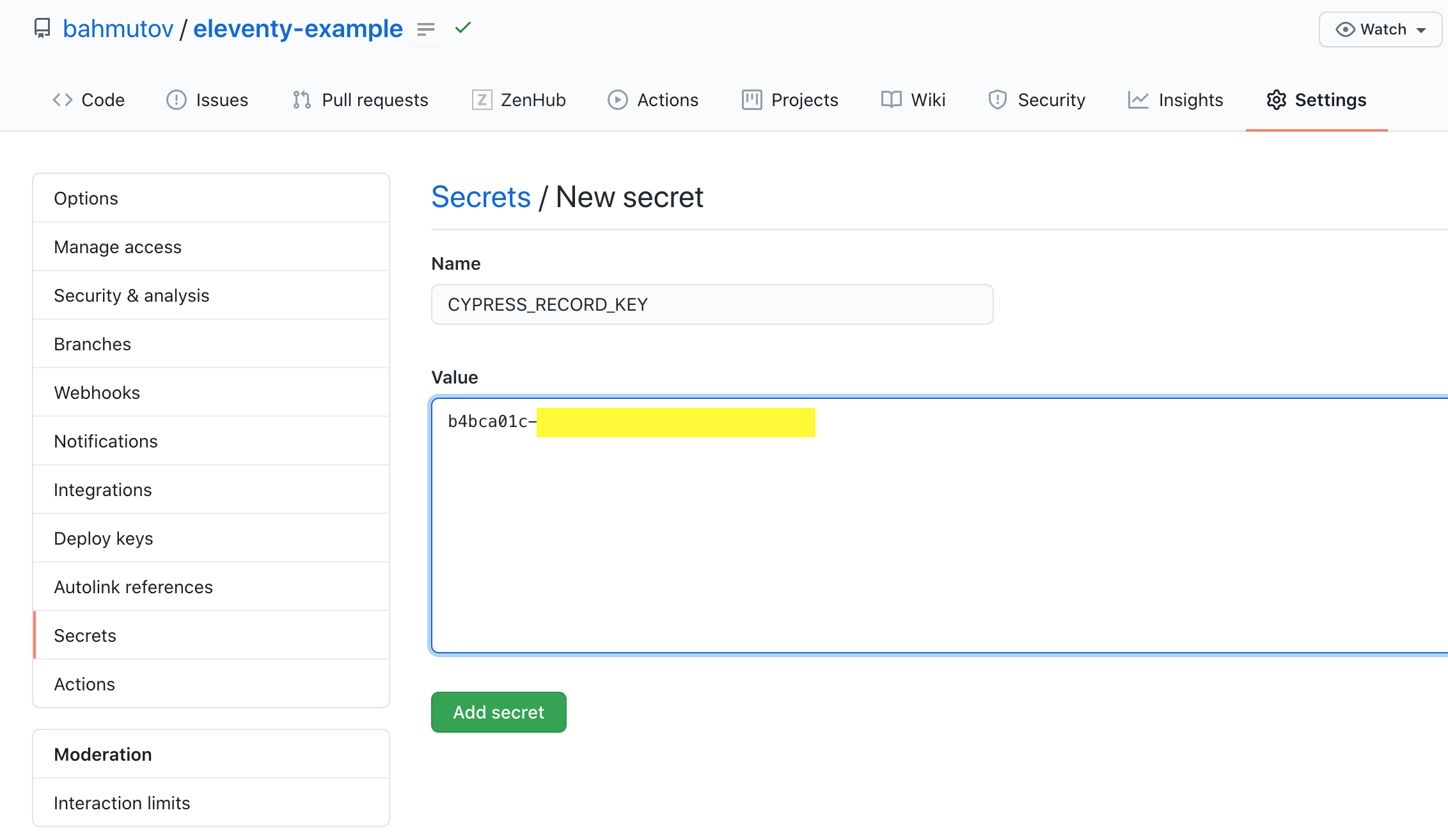 Let's update the GitHub workflow file to record test results and artifacts. We are using Cypress GitHub Action, thus we need to add record: true parameter and pass the recording secret as an environment variable.

The tests run on GitHub and show the recorded run URL https://dashboard.cypress.io/projects/y2sysj/runs/1

At the Dashboard page you can see every spec, every video, every screenshot, and lots of test analytics.

If we are using GitHub and Cypress Dashboard, we might as well use the Cypress GitHub Integration App. I can add it to all my repositories, or just install it for selected repository "eleventy-example". 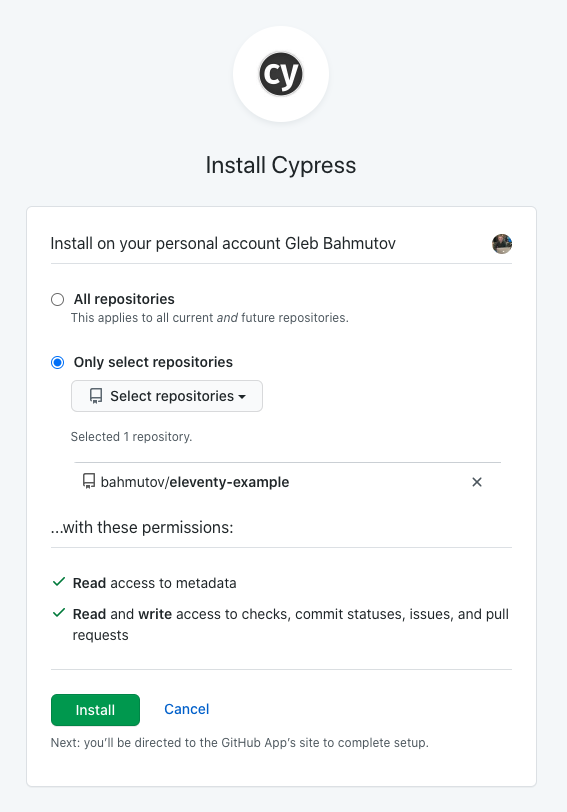 Once installed, we can configure how the Cypress GH App comments on pull requests and sets status checks. 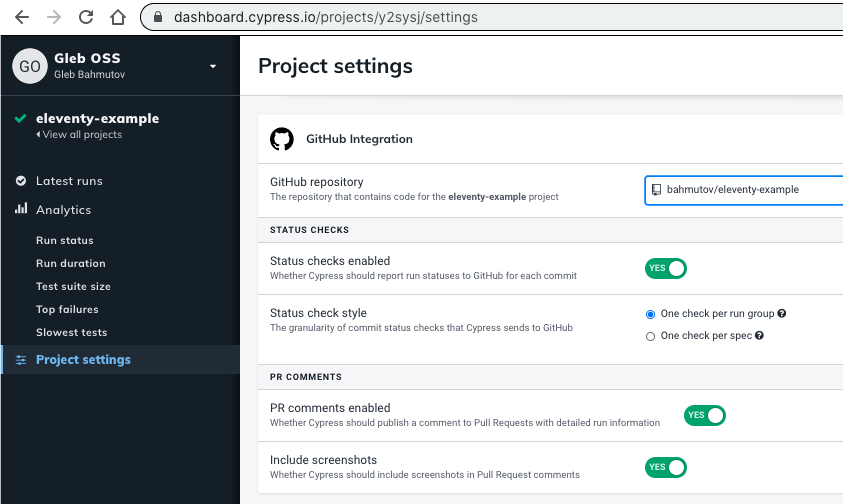 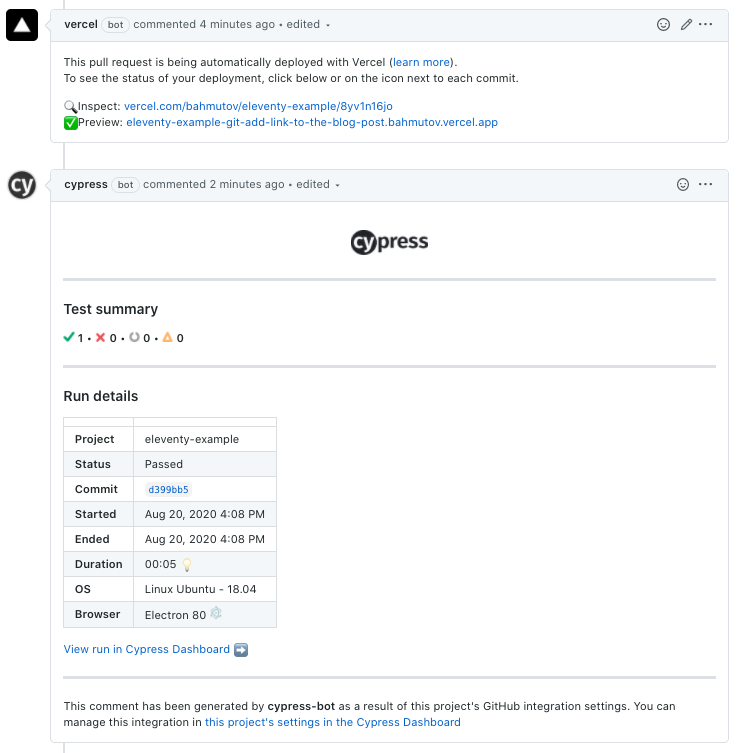 Cypress GH App adds its own status check to the commit.

Because we have the Cypress GH status check, we could remove our custom test job check implemented using curl commands. I will leave them in for completeness sake.

For full confidence, we do recommend adding visual testing using open source or commercial service to your functional end-to-end tests. Visual testing will prevent any CSS or style regressions from creeping into your site.

We also recommend for complex web applications to measure the code coverage to ensure all implemented features are covered by end-to-end tests. E2E tests are extremely effective at covering a lot of code.