Recently GitHub Actions went into general availability with very generous usage limits for public repositories, and I have started playing with them. Here are a couple of experiments.

Note: I have covered the topics below in my recent talk GitHub Actions in Actions, slides.

It is easy to forget to format code before pushing it to GitHub. I usually use husky pre-commit hooks with lint-staged but that requires configuration. It would be so much simpler if continuous integration server could run the formatting task and if there were any changed files, would commit and push them to the source repository, fixing any problems. Turns out, this is pretty (pun intended) simple as the example repo bahmutov/gh-action-with-prettier shows. Here is the .github/workflows/ci.yml file.

The above steps check out the remote source code, install NPM modules (with caching using actions/cache helper), then run Prettier via npm run format and finally use action mikeal/publish-to-github-action I have found at GitHub Marketplace. This action is super simple - it is a code I usually have written myself to commit local changes and push to remote, see its entrypoint.sh.

The integration of code repository (in this case GitHub) with CI (GitHub Actions) is very convenient from the security point of view. In this case, a secret GITHUB_TOKEN is automatically injected by the CI - allowing us to easily interact with the remote repository, no extra steps necessary.

Update: I now prefer using stefanzweifel/git-auto-commit-action to commit and push any changed files.

Actions are fetched directly from GitHub repositories, not from NPM. Thus you can specify what action to use using a branch name, tag or commit.

Using branch tags is dangerous though, read this post since you can execute unknown code when the tag changes. Thus if you want to sleep slightly better at night, please use the full commit sha of the actions you have reviewed.

GitHub has published Actions Toolkit for writing actions using JavaScript or TypeScript. This is excellent - always bet on JavaScript! The only problem - some actions for a typical Node project require quite a bit of copy / paste code. For example, every Node project needs to cache ~/.npm folder, thus it needs the following boilerplate action.

Ughh, wouldn't it be nice to have nice reusable "Install NPM modules and cache them, please" action? Unfortunately, action/cache itself is an action - and cannot be used from JavaScript ☹️. There is a little bit of discussion here on the issue I have opened, but worry not - Open Source to the rescue. I have cloned actions/cache into cypress-io/github-actions-cache and have refactored the code in branch reusable-functions to allow using restoreCache and saveCache functions from other JavaScript code. Easy-peasy.

If the previously cached ~/.npm or ~/.cache/yarn depending on the presence of yarn.lock folder was successfully restored, then we perform immutable install using npm ci or yarn --frozen-lockfile command and are done. If the cache hit was missed, then we need to save the NPM modues folder in action's cache.

Restoring and saving NPM cache folder functions use the forked cache module and rely on platform and lock file hash to know when a new cache is necessary.

Because the action needs to be ready to go, you need to bundle the action using zeti/ncc for example. Thus the action's package.json file includes the build script.

The generated dist folder is checked in - because GitHub actions are fetched straight from GitHub source, no from NPM registry. For publishing I use another GitHub action cycjimmy/semantic-release-action that tags and pushes new releases on GitHub and also update v<major version> branch, like v1 to always point at the latest release.

Finally, I have described action's main properties in action.yml and published it on GitHub Marketplace. 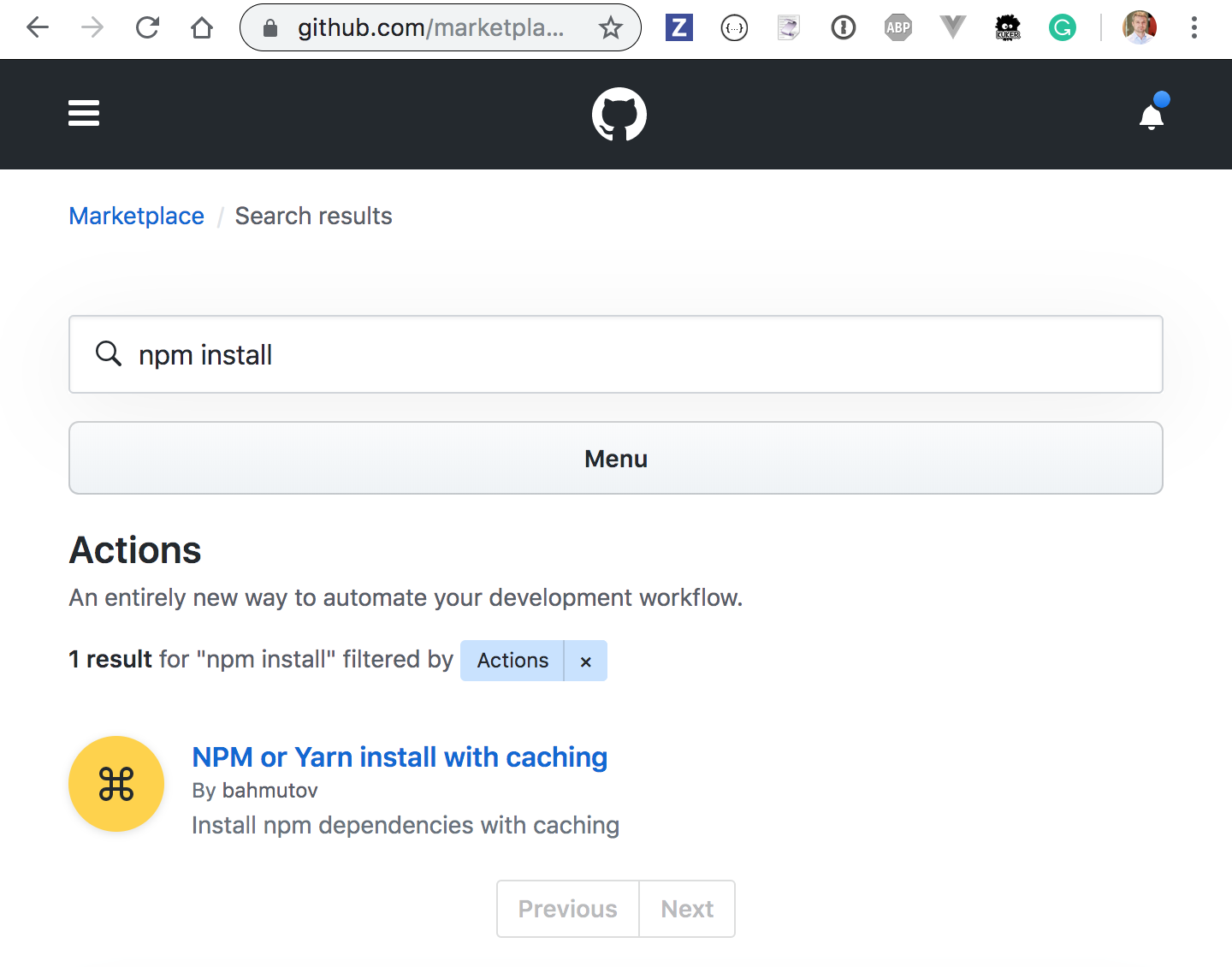 You can see this action in ... action at bahmutov/npm-install-action-example/actions. The CI file is simple

Name bahmutov/[email protected] refers to branch v1 of the GitHub repository bahmutov/npm-install where the latest semantic release is pushed. On the first build, the cache is empty, and npm ci has to fetch NPM modules from the registry. Then the folder ~/.npm is cached. 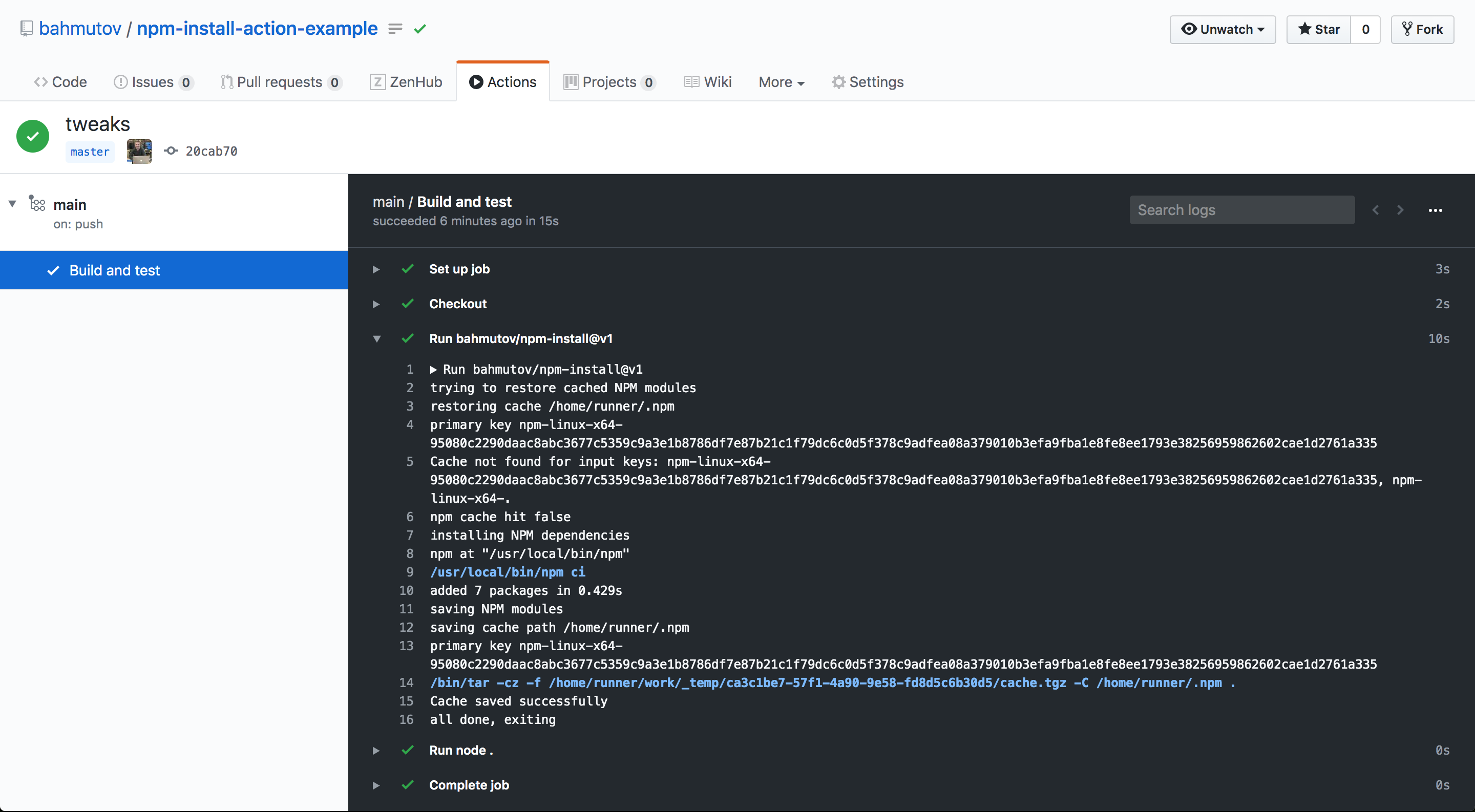 On the second build, the cache is hit, and npm ci is faster - because it uses only modules from the restored ~/.npm folder, and then skips saving unchanged cache folder.

Nice, feel free to use this action from your projects, and open new issue if you find a problem. You can also build your own actions using the exported NPM function.

Testing on every OS

Finally, I have written cypress-io/github-action to make running Cypress tests on GitHub super simple. Here is how to run tests on a single Linux machine

If you are a fan of semantic versioning like I am, you are probably using semantic-release to publish NPM packages automatically from CI. This type of release becomes even simpler with GitHub actions thanks to cycjimmy/semantic-release-action.

First, go to https://www.npmjs.com/settings/ and get a new "Read and Write" token. Save it to clipboard - it will never be displayed again!

Second, go to the project's Settings / Secrets and add a new secret with name NPM_TOKEN and paste the NPM auth token from the clipboard.

Add the following step to your workflow

The GITHUB_TOKEN secret is automatically created and injected by the GH Action App in your repository, you don't need to create it. Each time there is a Git commit on the main branch since the last release, the above action will publish new NPM version and will create a GitHub release. See example in action in repo bahmutov/cy-spok, where you can see github-actions user publishing releases. 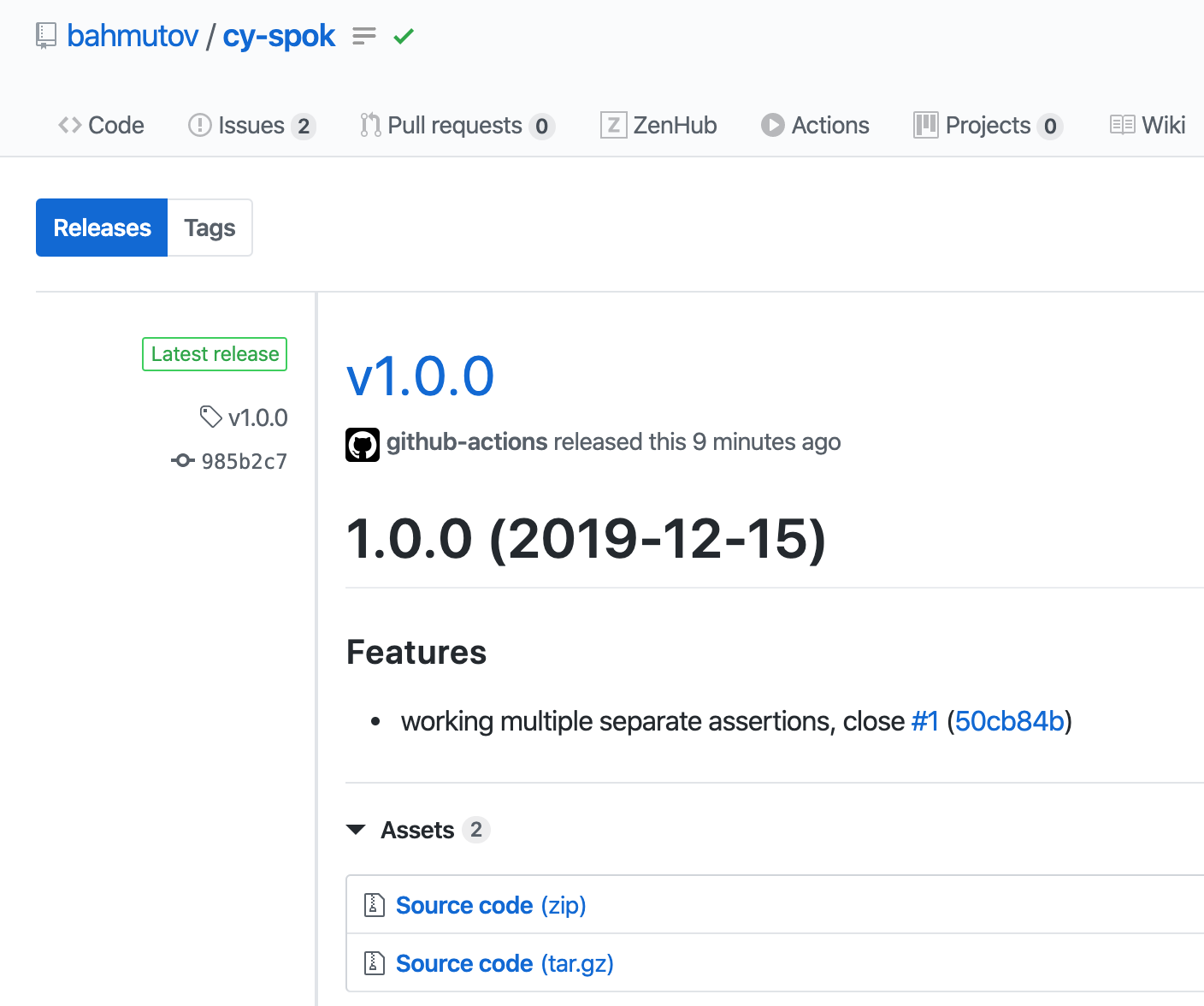 You can add GH Action badge to your README file. I prefer using the syntax that includes workflow name and explicit branch:

If you want to use badge as a link and go to the Actions tab of the repo, I like separating the urls into their own lines.

One thing I like doing is creating separate workflows for the same project and putting multiple badges in the same README. If there are example projects, we could put their badges there too. This creates a single CI status "dashboard" in the Markdown file, something I have recommended a long time ago 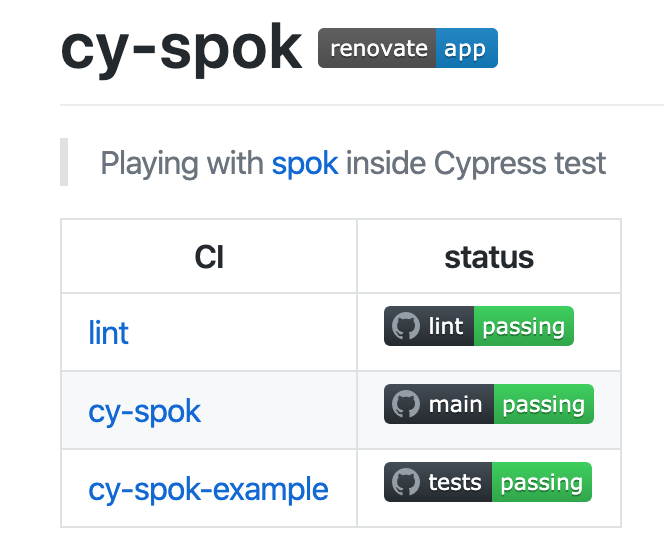 You can set commit status using GitHub REST API, if you know GH repository and commit SHA and have a token with permissions. A REST call using curl would look like this:

When running on GitHub Actions, the repository and sha are already set via default environment variables, and the user can pass the GITHUB_TOKEN created by the GH App itself.

I like using peaceiris/actions-gh-pages to deploy the repository or a single folder to GitHub pages.

Running a job on specific branch

Running a command step only on specific branch

You can use cron syntax to run the workflow periodically. For example, to run the tests every night use the following workflow trigger syntax:

A job can require other job(s) to successfully finish first

If you have a single required job:

You can skip a step or a job using a false expression. For example, to skip a job

You can start a workflow from the web GUI, and even provide the input parameters. It is really convenient for kicking off complex workflows by a casual user. See the GitHub announcement.

See examples in the blog posts How to Keep Cypress Tests in Another Repo While Using GitHub Actions, How To Tag And Run End-to-End Tests,Faster test execution with cypress-grep.

A really powerful new feature from GH - reusable workflows. See the blog post The Simplest CI Setup For Running Cypress Tests for details, but here is how to use a public workflow from bahmutov/cypress-workflows repo:

Use environment variables as action inputs

You can even output using normal console.log statements, for example see trigger-circleci-pipeline

You can use the output from other job steps

In addition to step outputs, you can output nice Markdown text as job summary following the syntax. This example comes from trigger-circleci-pipeline

To run the workflow on the main branch only

To run the workflow on all branches, but the backup branch