Recently I came across vue-cli server reload test. The test uses Puppeteer to verify that vue-cli scaffolds a project correctly, that dev server is serving a Vue app, and that changing the app's source file reloads the page, and it shows updated text. Here is the main part of that test.

The above code certainly works. But even discounting all the code outside the function runTest, count how many lines of code are related to the test and how many lines of code are dealing with starting the browser, finding the element, waiting for the text and then cleaning up. Puppeteer is a great tool, but it is NOT a testing tool specifically; it is a general Chrome browser automation tool. Thus a tool specifically designed to be a testing tool around a real browser might be more convenient to use in this case.

One such tool that specifically focuses on solving browser management, element selection, automated retries and other developer experience issues common during testing is Cypress.io (full disclosure: I have joined Cypress team in 2017 after being a super happy user for almost a year). Let me try writing a similar server test using Cypress for comparison.

I prefer working on a new project rather than forking vue-cli to avoid distractions of a large code base. Let us create a new Vue project to use as a test playground. After installing vue-cli globally, I need to scaffold a project with hot module reloading (you can find finished project at bahmutov/test-vue-cli).

Pick webpack-simple and run vue init with full template name (to get around 404 response I am getting today) vuejs-templates/webpack-simple.

Open Cypress once with npm run cypress:open to scaffold its folder cypress. 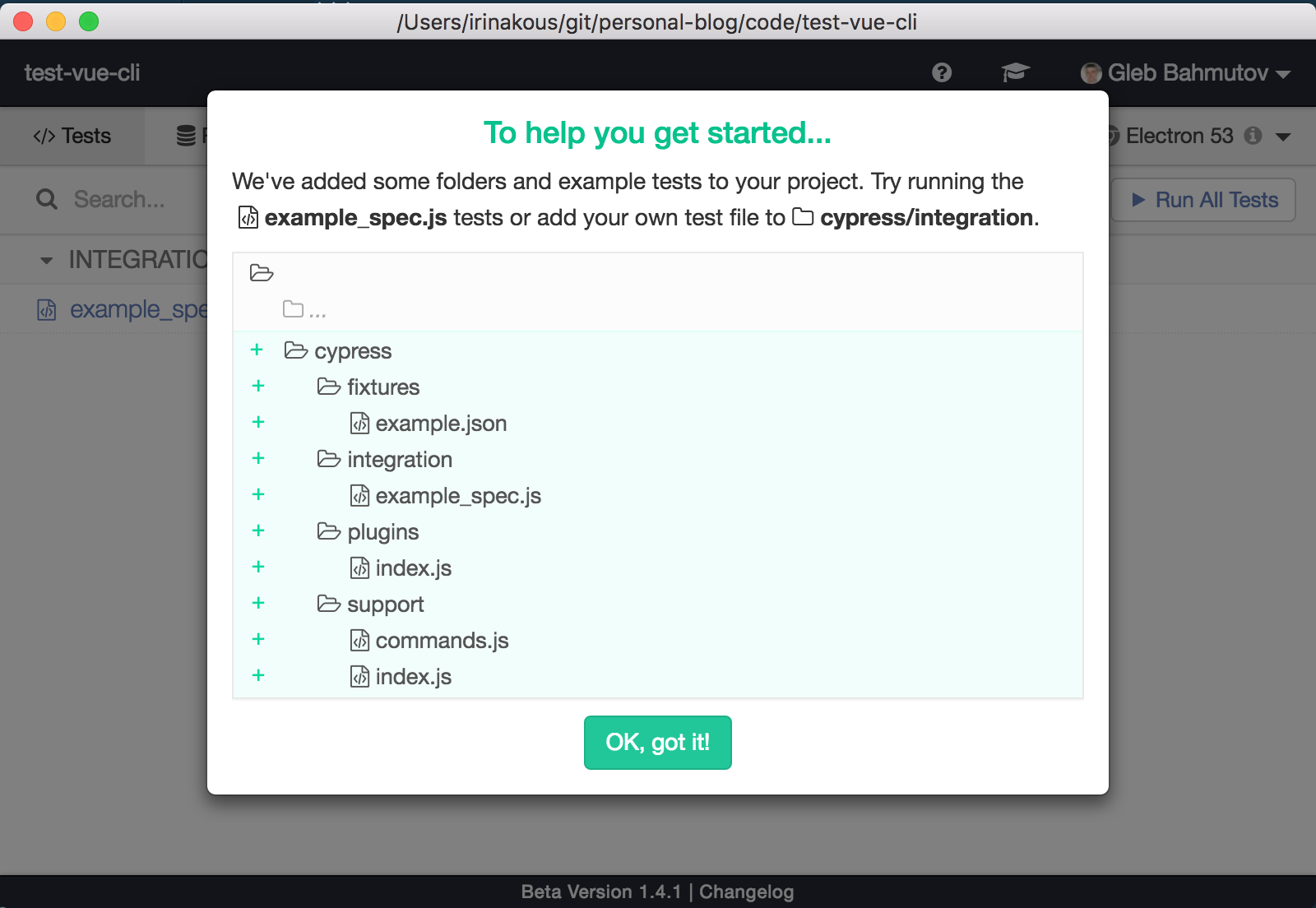 I prefer deleting the created example_spec.js with many many examples of tests and starting from scratch. Let us verify that our default application shows the expected text "Welcome to Your Vue.js App" in element h1.

Now let us read the src/App.vue file, change the message passed to the Vue component and check that the browser shows the updated message. We are going to use cy.readFile and cy.writeFile methods.

The test passes, of course. We can see each step of the test in the command log on the left.

Here is the important part. Cypress is really optimized for testing. Do you want to see why the first assertion cy.contains('h1', message) passed? Hover over or click on step 2 to see the state of the DOM at that moment. We are finding the right text at the right location on the page - not accidentally matching some other text that might be on the page. 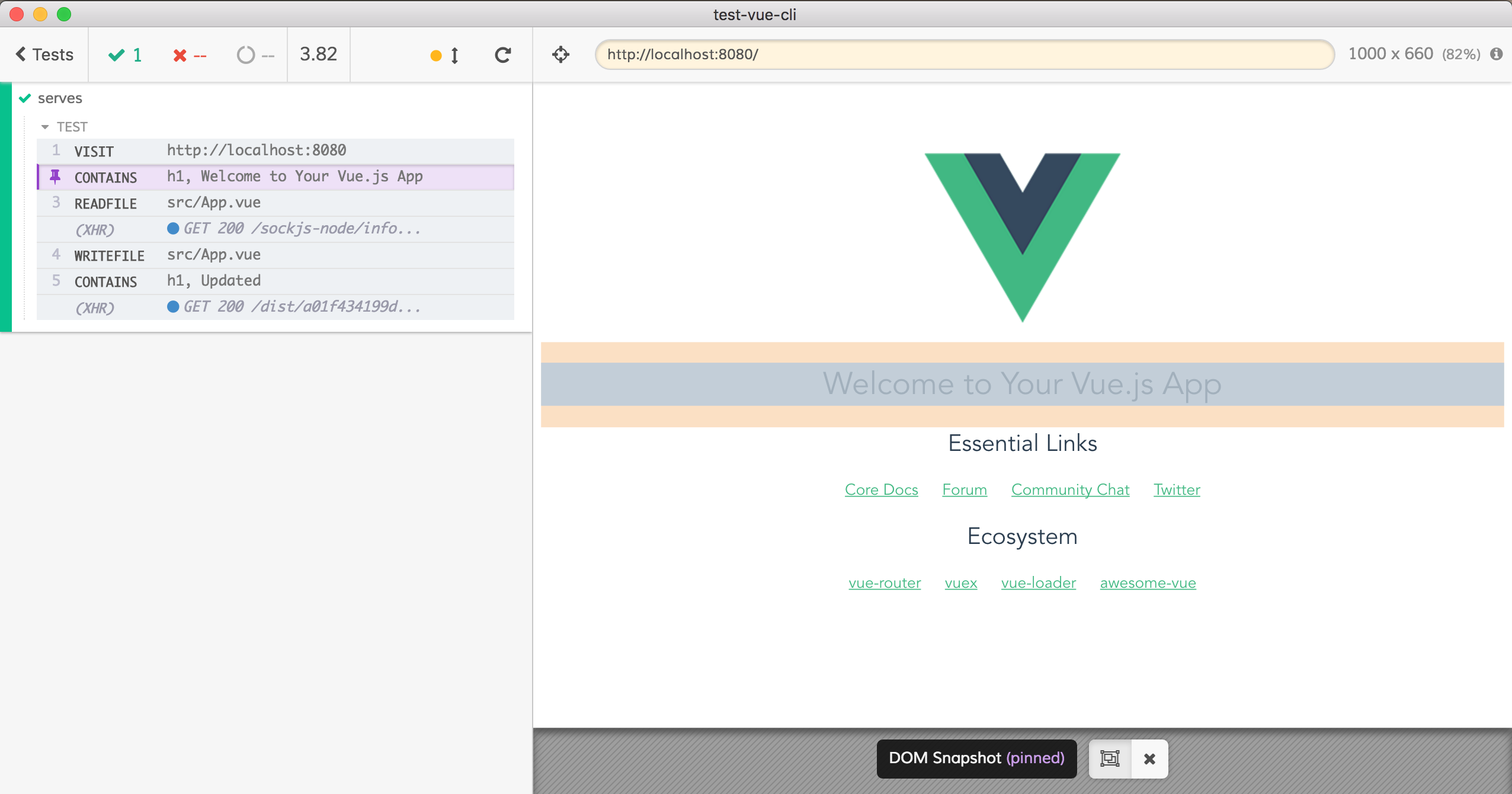 Click on the next test command - READFILE. It shows a popup message "Printed output to your console". Open the DevTools (Cypress is after all just an Electron app, or it can control Chrome browser) to see the file read and its contents. 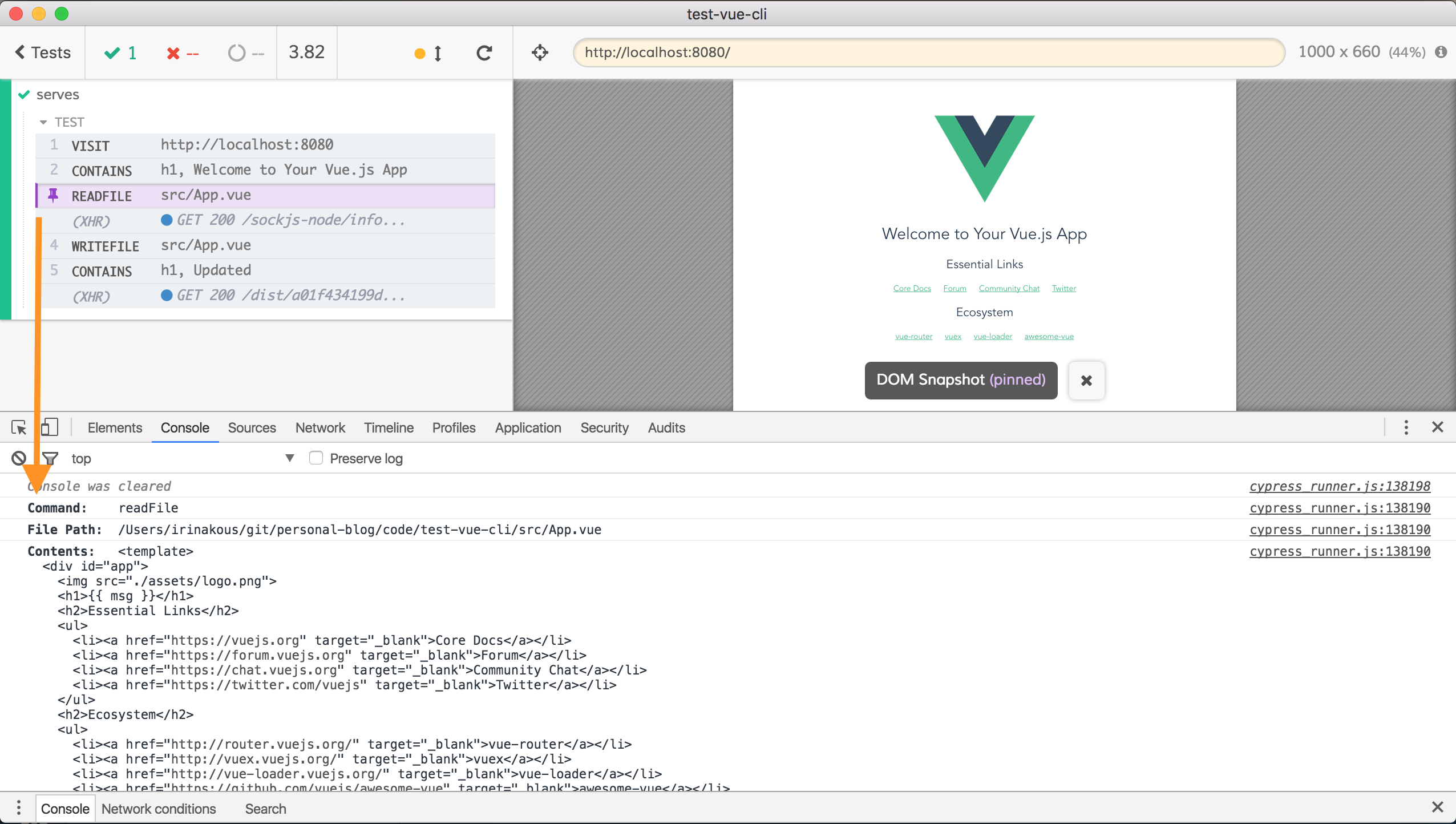 Isn't this convenient during working with tests to see all data related to each step of the test?

There is one more note that I must make. You should strive to make each test independent from any other test, even independent from its previous run. In our case we have changed the file src/App.vue, and if we reload the test, it fails to find the original text "Welcome to Your Vue.js App". Our previous run changed the source file, and our test did not start from the clean state.

Again, the above screenshot shows the difference between a general browser automation tool and Cypress. The reason for the failure is communicated very clearly; Cypress team pays a lot of attention to good error messages. It should be enough to look at the screenshot to immediately see the problem. In this case the app shows "Updated" where "Welcome ..." text should have been.

By the way, Cypress takes video of the entire test run by default, and screenshot after failures automatically when running on CI with npm run cypress:run command; there is nothing to configure.

Ok, let us fix the test. We can modify the App.vue file after the test - but that is an anti-pattern to avoid. You never know if the test failed or crashed - the clean up after the test is not guaranteed. So let us make sure the test starts with expected file.

There are many things we could do in this case, but I pick using a fixture. Copy the original src/App.vue to cypress/fixtures/App.vue. Before our test, load the fixture and save it as src/App.vue.

The test reliably passes any time we run it. Even better, we can add back our very first original "message" test.

The original Vue test also starts the dev server, grabs the output URL and runs the test. We believe starting and stopping server inside Cypress is an anti-pattern. Instead we recommend using start-server-and-test utility.

The npm test command starts the dev server, waits for the given url to respond with 200, then runs Cypress without GUI, and then shuts down the server. The url is hardcoded, but we could add extracting url from the first command's output to start-server-and-test tool if needed. For now I will just move the url from the spec file to cypress.json file.

At runtime, we can even overwrite the base url using command line arguments or environment variable. For example, if the server is running at port 3000 we can run out tests against that port with this command.

The Vue test has 60 lines, including several blank ones. Almost equivalent Cypress test is 20 lines. But I think the smaller test size does not tell the whole story.

Give Cypress 5 minutes, and I guarantee that you will not want to use any other tool for E2E testing. After all, here is what NASA says about Cypress 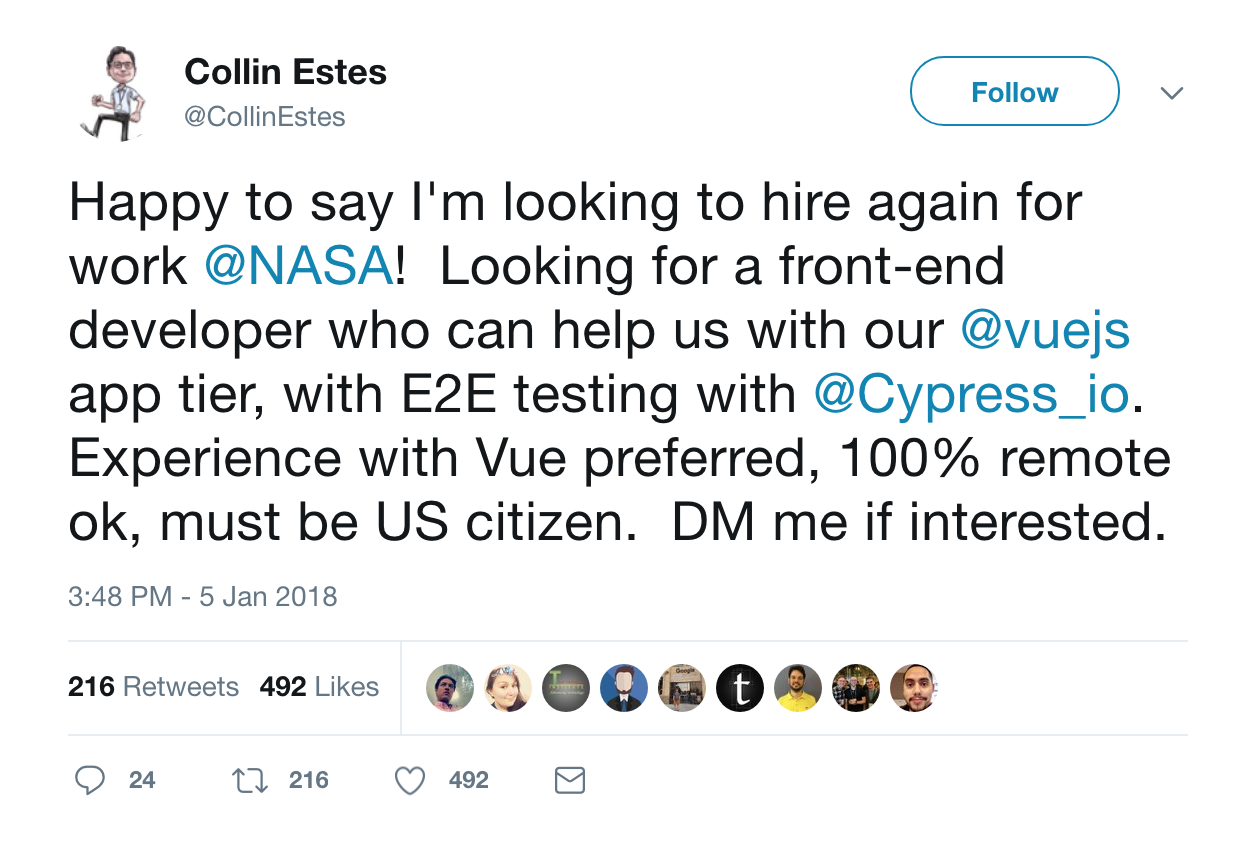