Array Explorer is a great resource for learning JavaScript array operations. You can see it in action yourself at https://sdras.github.io/array-explorer/. Here is me adding items to an array and seeing the result and relevant documentation.

The source for this project is available at github.com/sdras/array-explorer and is written by wonderfully productive Sarah Drasner. I have noticed that the project does not have any tests. This is a great opportunity to quickly write a few end-to-end tests using Cypress test runner. Just a few high level tests can exercise the entire application as if a real user was interacting with the page.

Hint: Sarah has a sister project sdras/object-explorer that you could test the same way! That would be a great practice for anyone trying out Cypress.

First, I need to setup Cypress. Luckily it only takes a minute.

If we execute npm start right now we will get a local app running at http://localhost:8080. Let us start testing it.

During local development we will be running npm run test:gui which opens Cypress in GUI mode - it is really convenient to see what is going during our tests. On CI we will run Cypress tests in headless mode using cypress run command. 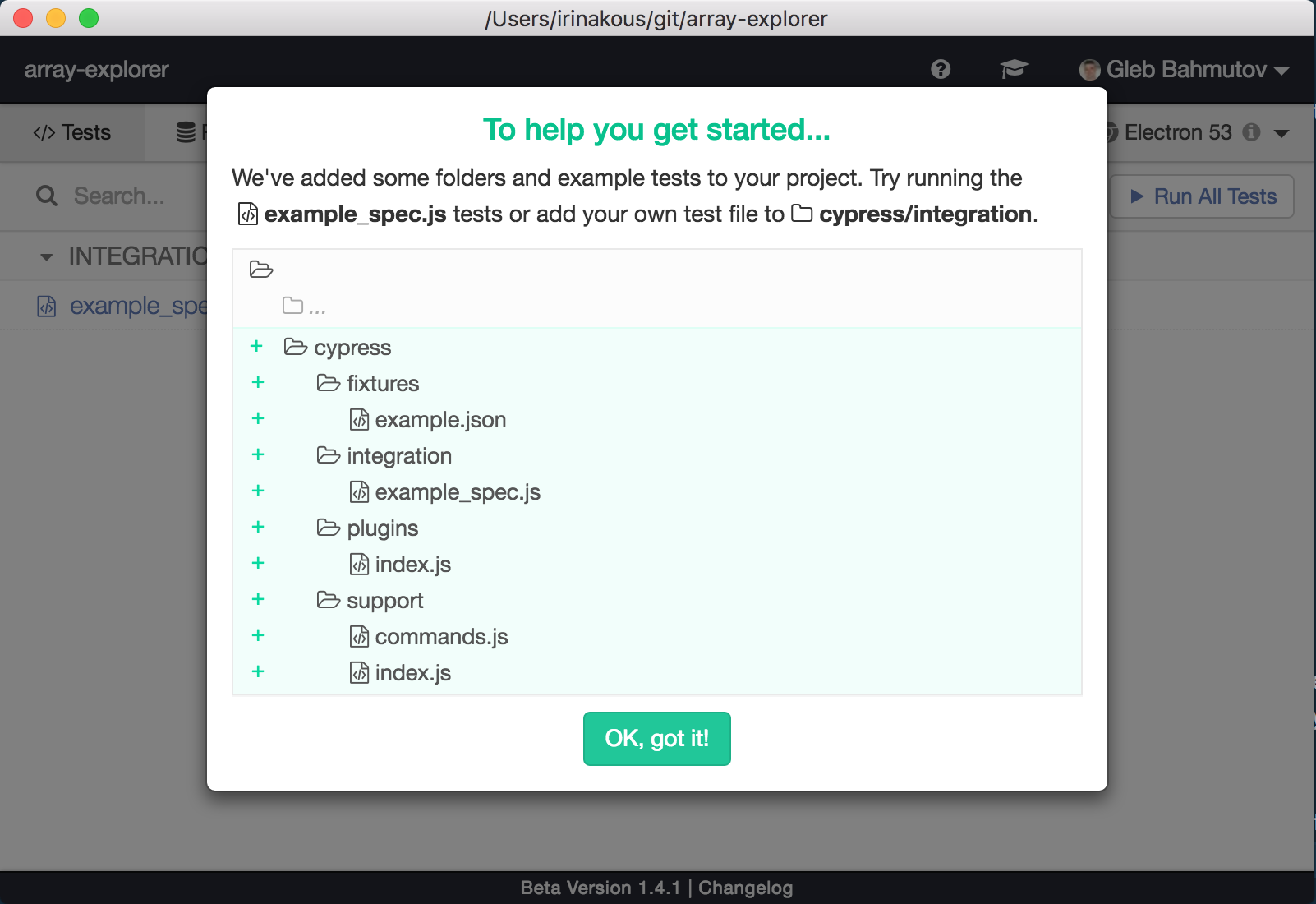 Cypress has noticed file changes and ran it right away. I see the local site in the Cypress iframe (the dev server npm start is still running). Everything is green!

Let us confirm that the page is greeting us with the name of the project "JavaScript Array Explorer". For finding unique text on the page, I usually use cy.contains(text) command. In this case this text might appear somewhere else on the page. To avoid accidents like this, let us make the selector more precise. Recently we have introduced CSS Selector Playground tool. Click on its target icon next to the url bar and hover over the text to see its "best" selector - in this case it suggests using h1 selector.

Let us update our first test to confirm that the text really greets us after load.

As suggested by the "CSS Selector Playground" helper (or by looking up in the DevTools), the first drop down choice can be queried with #firstmethod selector. The method options can be set in the #methodoptions drop down. Here is our test. 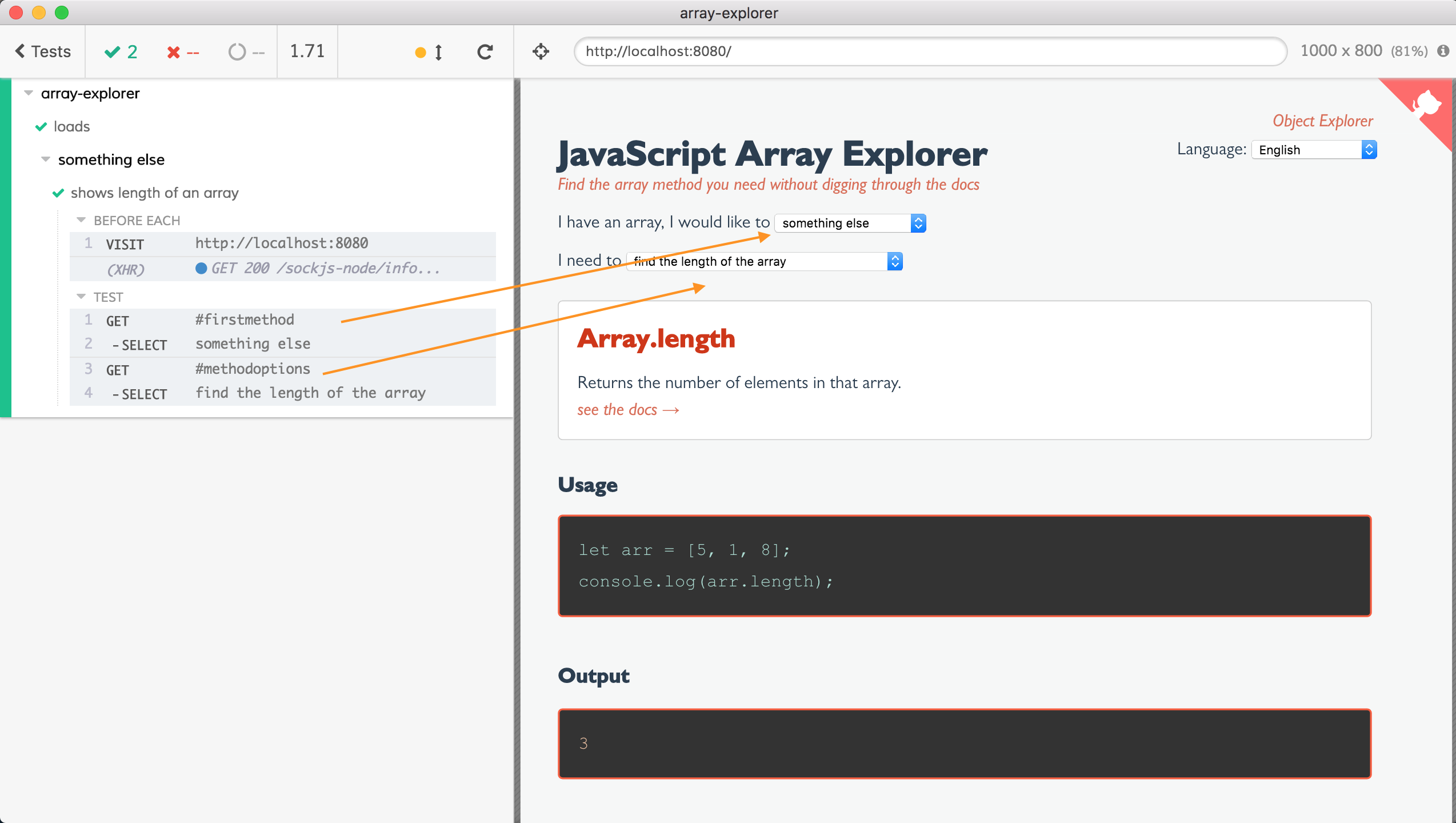 While the test is running I see Cypress opening drop downs, finding the right choice, selecting it. If an element with a given selector was missing and did not appear for the command's timeout duration, an intelligent error message with a screenshot would appear. But so far everything is going great.

Under the hood, the Array Explorer has input and output code as text already in the DOM, just hidden. The input code is supposed to "produce" the output text - it has console.log(...) statements, but of course they are not actually executing. So in our "length of array" example the input looks like this

The output text is 3 and is initially hidden. Only after delayed "type" effect it appears.

In our test, we can grab the input code as text, and the output text, and we should make sure the output value is visible and correct. To make sure the value is correct, I will eval the input text. Because the input uses console.(...) to "print" the result, before evaluating the code, I will set up a spy on console.log method using built-in [cy.spy][spy] method. Here is the entire test - it kind of looks scary, but it is really universal and can work with any array explorer example!

Here is the test in action. Notice an interesting detail that goes to the heart of what makes Cypress great - the intelligent waiting for assertion to pass. The last statement of the test grab the output element and sets up TWO assertions.

Tip: .and is equivalent to .should. It improves readability when making multiple assertions about the same element.

The video below shows the first asserts waits until the type effect finishes and the app makes the answer visible. Then the second assertion verifies that the right value is in the element.

Cypress fights the unpredictable nature of end-to-end tests by retrying commands for a period of time, and these options are very configurable. The default command timeout of 4 seconds works well for this example, but was too short for other ones. So I increased the command timeout by setting it in cypress.json file

As my test grows in complexity to handle multiple output values and different edge cases, the code becomes difficult to understand. Luckily, it is just JavaScript. I can refactor the test code as much as I like. I could move utility functions out to separate files and just require or import them. I can bring any NPM module as a dependency and include in my test code.

Back to our test. We can factor out the logic for running the input code sample and comparing it to the output text box. Here is this function with its main parts.

A very handy feature to make tests simpler is aliases. Aliases allow saving reference to a DOM element, data or XHR stubs to use later. Here is a fragment of the function that gets the output text and saves several aliases for future use.

In the above example we save reference to the DOM element as alias output, raw text without comments as alias outputText and parsed JavaScript values as outputValues. Later we can use the aliased values like this

I wrote a couple of other tests: "fill array ...", "copy a sequence of elements ...". They all work the same way - set the desired method example and call confirmInputAndOutput. The spec file kind of looks boring.

All tests are going to look like this. Can we generate the tests from a list of options? Yes we can. Instead of writing individual it(..., () => {...}) calls, I placed all primary method names and corresponding option names into an object of arrays. A small helper function iterates over the arrays, creating tests.

One test is failing. Can you spot the problem? 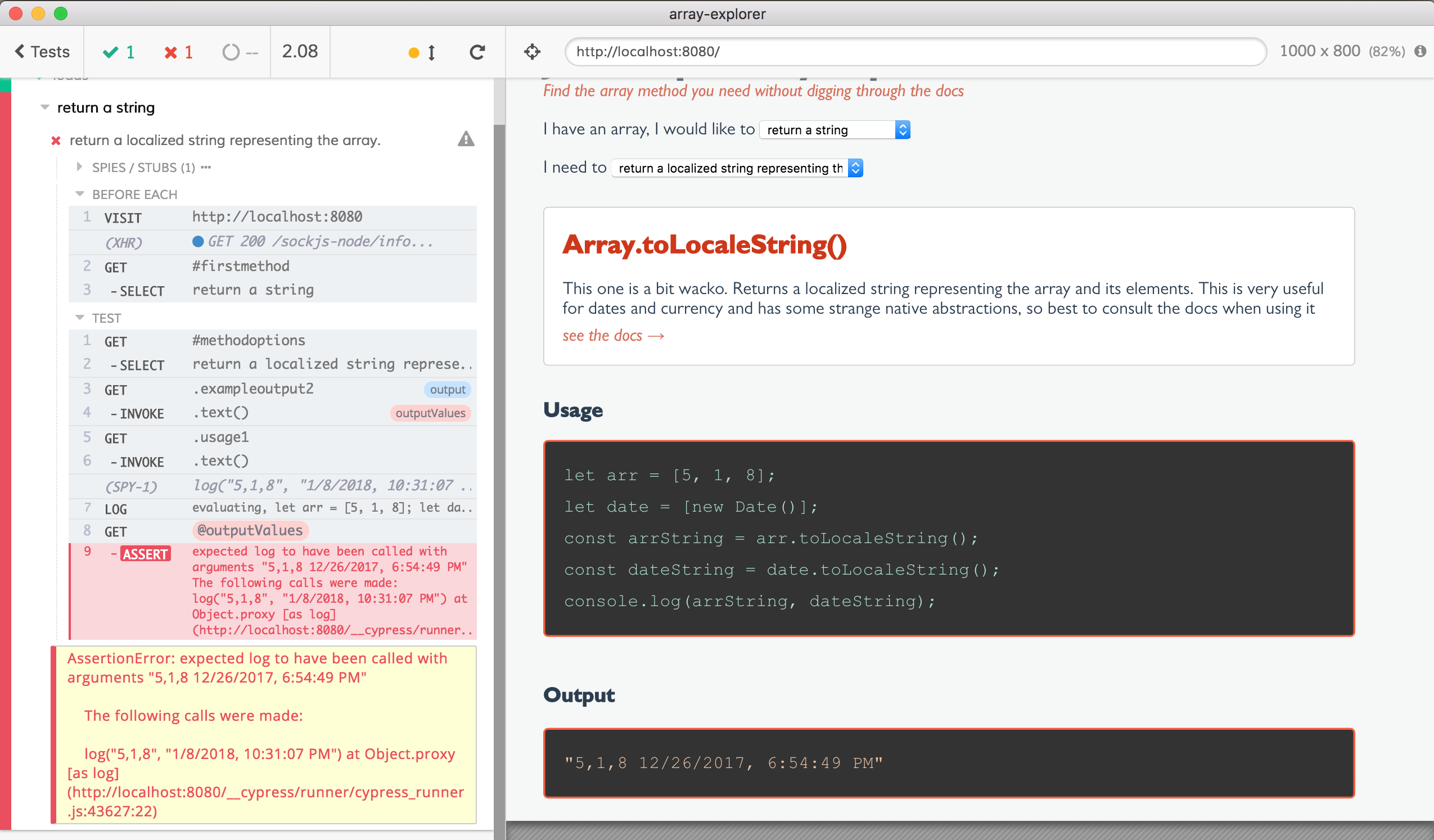 The expected output is hardcoded to be "12/26/2017, 6:54:49 PM", which will never match the evaluated input code. What can we do? Ordinarily, Cypress tests use cy.clock to control the time inside the running application like this

But our use case is different. It is NOT the application that is calling new Date(), but our unit test via eval.

Thus our test code must fake the date. Luckily, Cypress has Sinon bundled and available under Cypress.sinon property. Right before we evaluate our code we can fake the Date object.

Tricking eval to use local variable via closure is one of my favorite JS tricks. Aside from this, I changed the original example a little bit. I split the single console.log to be two statements to better match what every example is doing and what my tests expect. 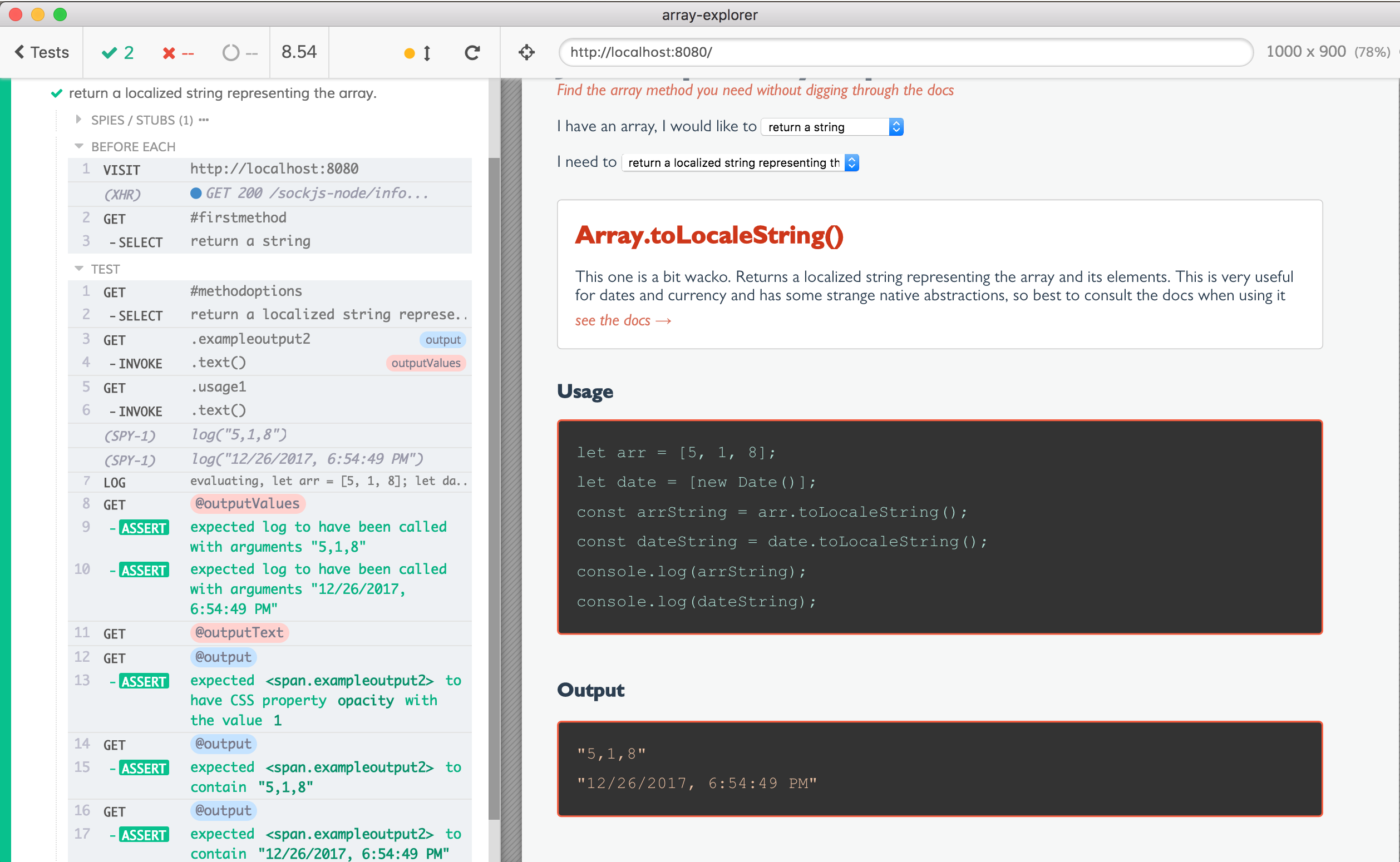 Note the alises are highlighted when saved (pink and blue rounded labels output and outputValues). They are also highlighted with @... label when used.

The tests are passing, but there is one negative. They take too long to finish - 67 seconds! The main reason each tests takes a few seconds are the delays built into the app. There is half a second delay to let the user read the first line of the example code, then there is the "type" effect that uses gsap library to reveal the rest of the example code.

The gsap is JavaScript animation library, so maybe if we can "speed" up application's timers we can zoom through the type animation and make our tests faster. While Sinon includes timers, I found lolex to be the most convenient library to work with fake timers. Luckily using this from our tests is very simple.

Inside the test logic we can manually advance the clock after the source code appears and the app called its setTimeout (which is now stubbed).

The generous 10 second time jump completes the initial delay of 500ms and instantly zooms through any typing animation the app makes. The result is awesome - total time to finish all tests goes down from 67 seconds to 27 seconds!

The test can use this data attribute to get the right selection element. After selecting the desired language (I am picking my native Russian), we use the same test logic as before. 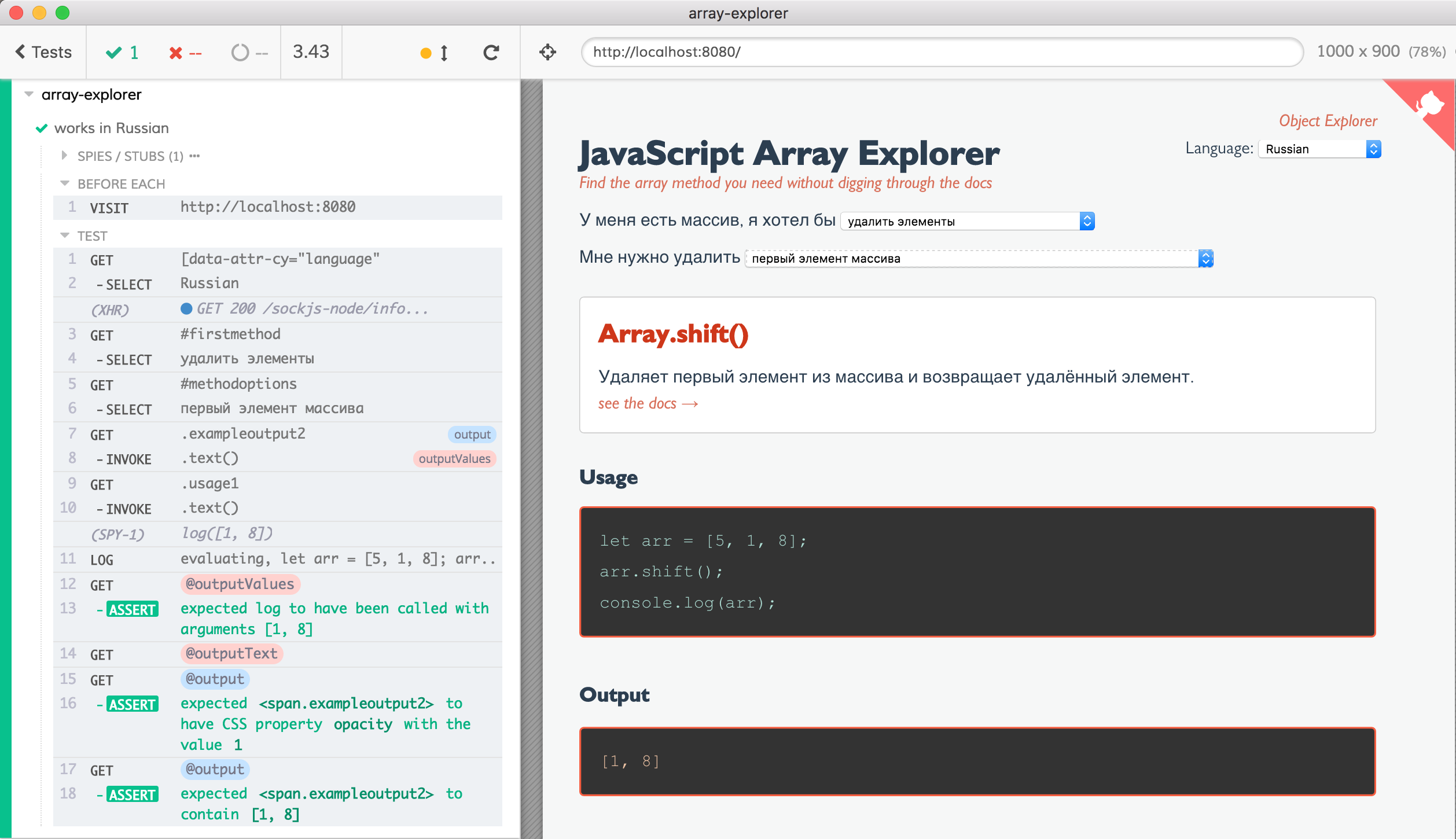 Tip: we could have imported data for different languages directly from the store/<language> files. Then we could actually iterate and create full test suites for every language. After all, out tests are JavaScript and can share code with the web app itself!

Here is the final result - the spec.js file and the screen recording of the running tests. The tests take longer than 27 seconds because my laptop is choking a little bit during while doing full screen recording.

I have opened a pull request sdras/array-explorer/pull/70 to merge these tests into the Array Explorer. Maybe these tests can inspire you to add tests to sdras/object-explorer?

You can find more information about Cypress from these links