Note: the source code for this blog post is in repo cypress-io/cypress-example-realworld in the pull request #55.

End-to-end browser tests do not have to go every time through the DOM interface to exercise the web application. In fact, doing so would make the end-to-end tests terribly slow and inefficient. In this post I will show a concrete example that bypasses the HTML interface for all the but the first test, yet keeps covering the same amount of code (measured by collecting end-to-end code coverage), and runs much much faster.

Our target application is a clone of the Conduit blog web application, and we want to confirm that we can write a new article. Using Cypress Test Runner we can write our first "writes a post" test.

The above test is already pretty solid:

Because we can measure code coverage from Cypress tests, just by running this single test we get 54.2% of all front-end code statements covered.

The test runs creating a new blog post and then commenting on it.

After this test finishes, the total code coverage increases by 3% 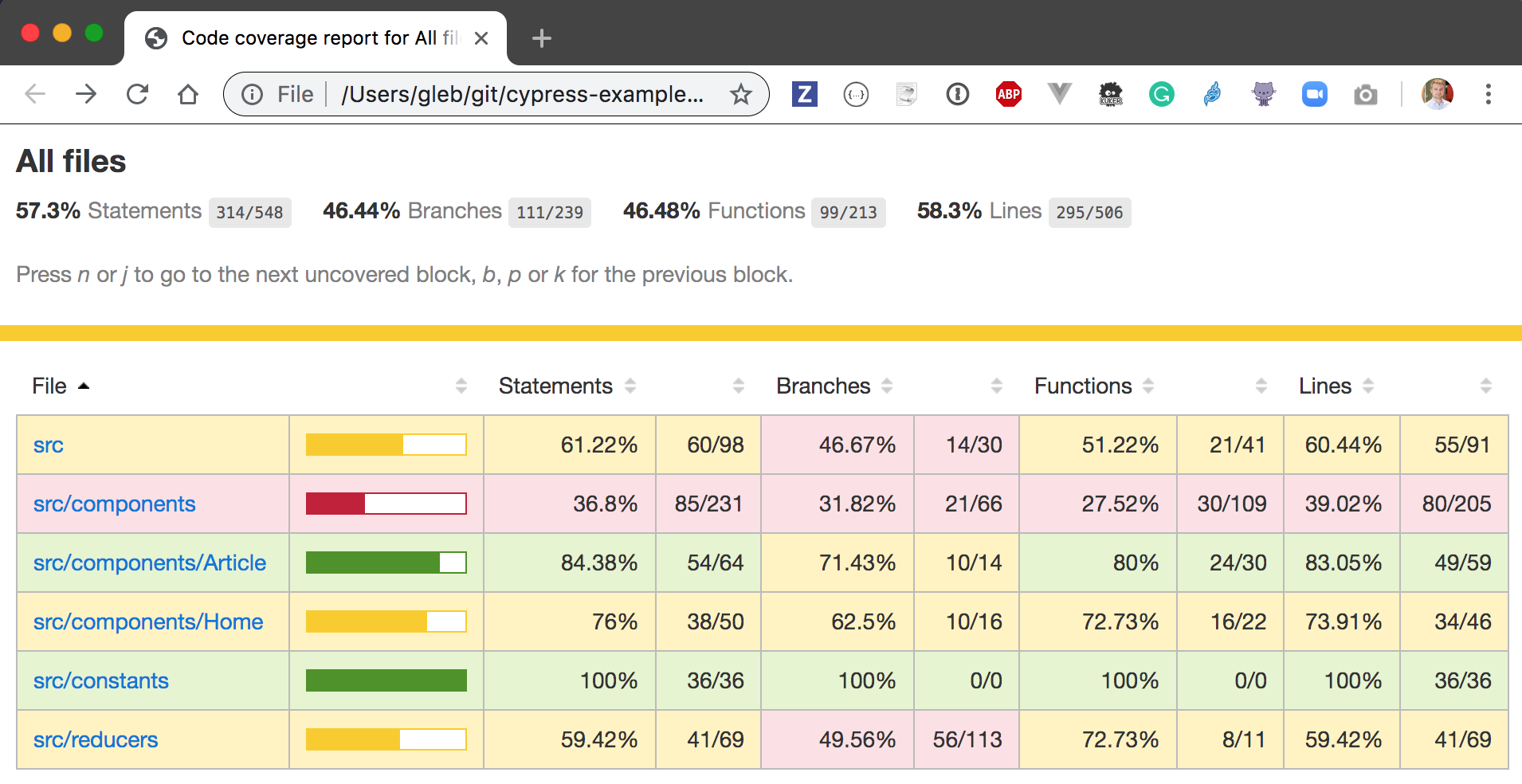 We can see the new lines covered in the "Article" reducer, the "ADD_COMMENT" action has been covered by the new commands. 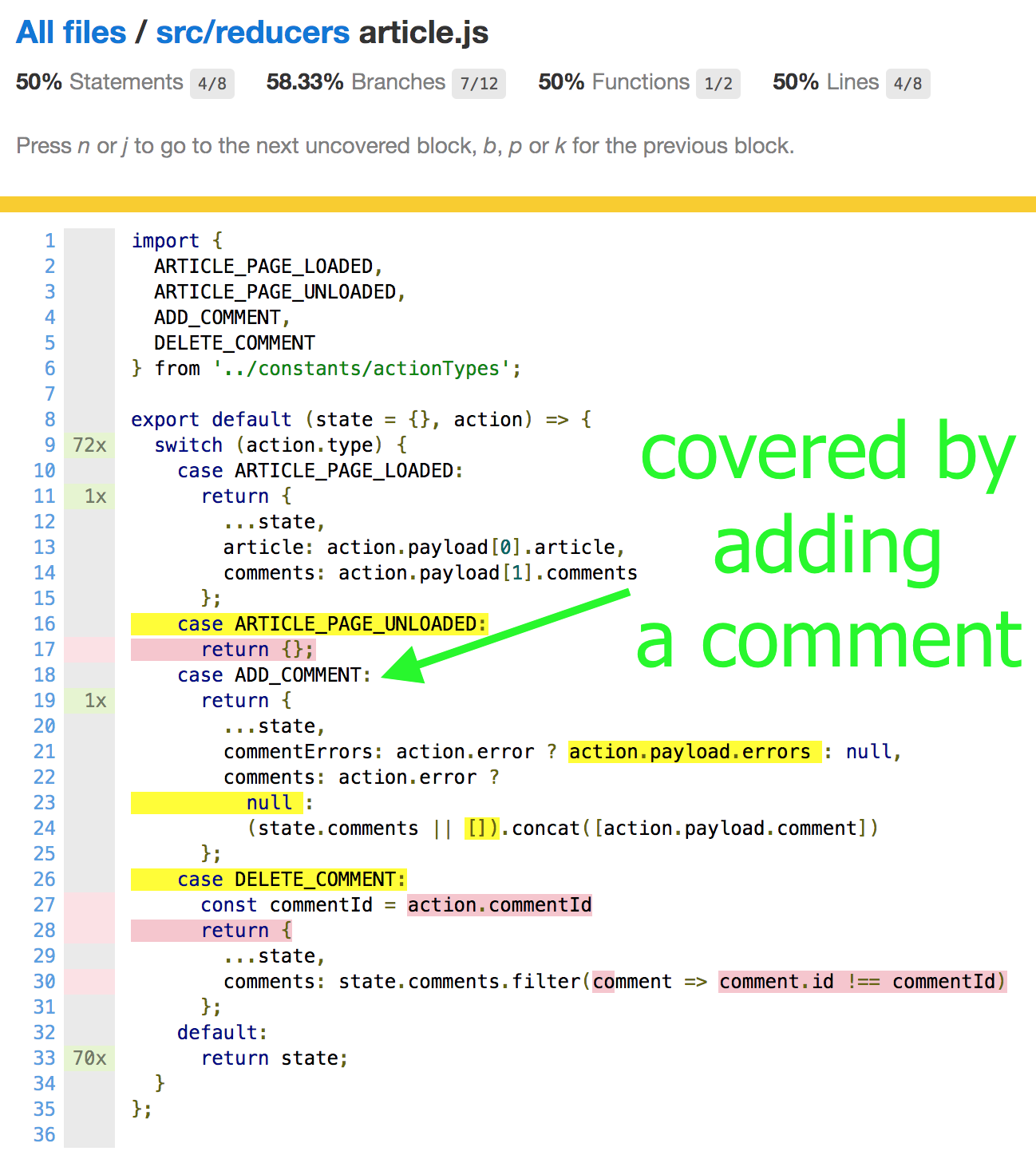 Yet, there is a problem. The second test "writes a post and comments on it" is exactly 70% line for line matching the first test "writes a post". We are creating the post by clicking and typing on the page - repeating exactly the same page actions as the first test. What have we learned from about 2 seconds it takes to type the new post (just like a real user would type character by character), that we don't know already from the first test?

So to remove the duplicate lines, people write Page Objects, a wrapper around the HTML and the elements of the a particular page. We avoid the code duplication by having our tests call into the Page Object wrapper. In our case, the test would be

The above test works, and removes code duplication. Every time you need an article to test commenting on it, or to test how an article can be deleted, or how a user can like it - every test can just call editor.writeArticle() and be done.

Let's see why the Page Object is less than ideal.

Once we have "writes a post" test that goes through the DOM to confirm that a user can write a new article, there is no point doing it again. Instead we can directly create an article by accessing the underlying application code and calling its methods - I call this approach "app actions", and argue in the blog post Stop using Page Objects and Start using App Actions that this approach saves you time and removes an unnecessary level of code sitting on top of the HTML. And this is not about code duplication - yes, you could factor out writing the post into a single reusable function (this would be a Page method). The point is that we want to avoid going through the DOM completely to perform an action that we have already tested!

In practice, this means we need to access the underlying web application to create the post somehow. This is how we do it.

First, study the application code to see how the UI components trigger actions. In our case the Editor.js component submits an article via an "agent" object reference.

Ok, so if we could call agent.Articles.create method directly from our Cypress test, we could create an article almost instantly. Let's pass this agent reference from the application to the test via window object.

The test can grab the window object, then its agent property and call the application action.

The test runs and passes - creating the new post instantly. 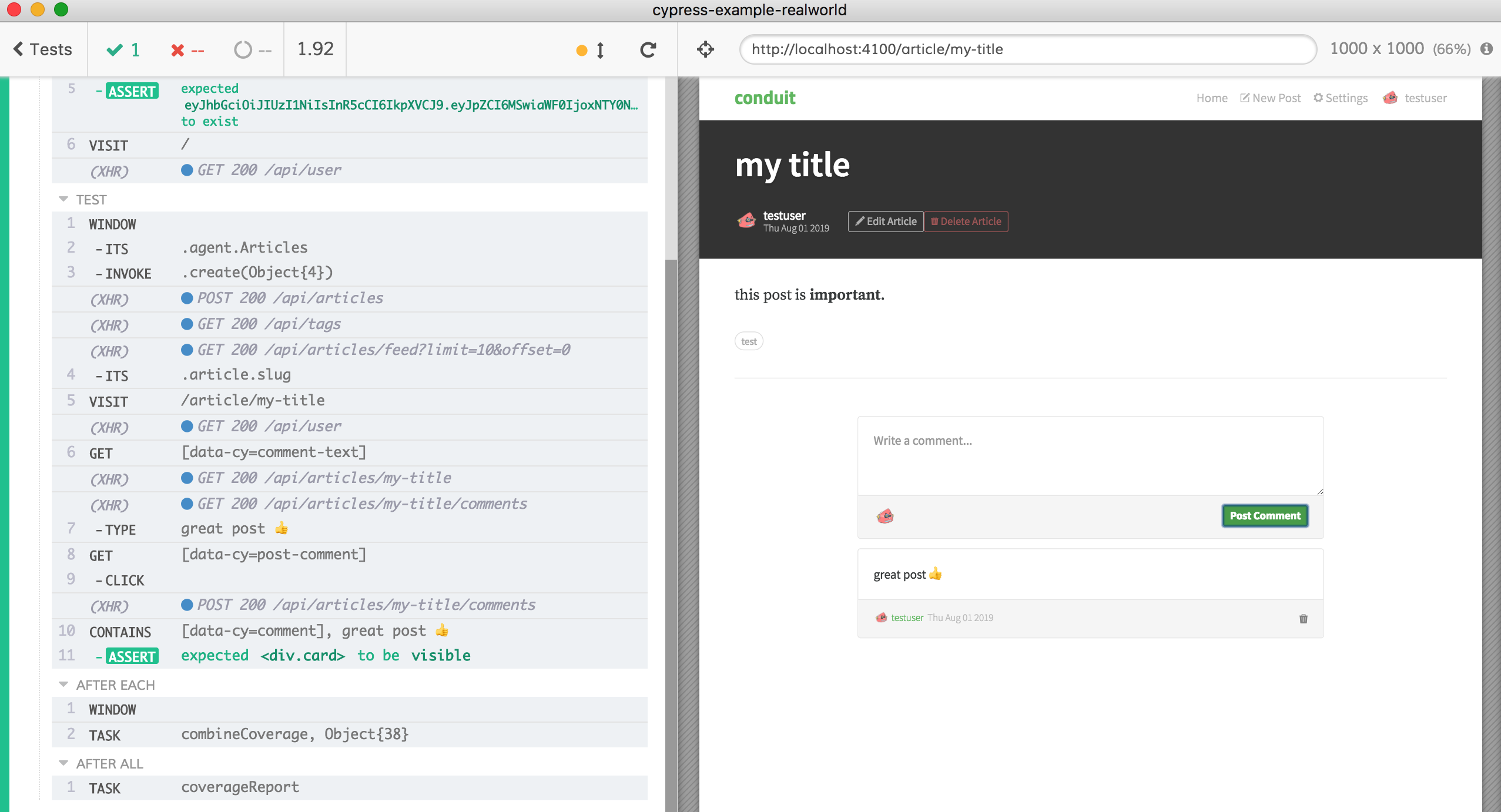 If we run both tests "writes a post" and "writes a post (via app action) and comments on it" togher - we get exactly the same code coverage percentage 57.3% - because we literally covered the same statements as before - we just did not cover some of the twice.

When we bypass the DOM to set our state (we need an article) before testing a feature (like adding a new comment), we do not even have to use the application code. By studying the Network tab and the application code we can see the HTTP POST request that happens when a new article is sent to the server.

Super, we can execute the same call ourselves. Here is the custom command (for reusability) and the test

Super, the test passes, and we have a reusable custom command cy.postArticle we can use any time we need an article to comment on, or to like, or to delete - thus all our end-to-end tests can run fast, yet because we have already tested creating a new article, the code coverage stays complete.

For me, the rule of thumb is: