You can find the sample project with different Prettier settings configured per-subfolder at bahmutov/prettier-config-example.

Prettier reformats your JavaScript code consistently and (arguably) in way that is easy to read and understand. It takes whatever copy/pasted code snippets you put into your file and makes it look the same as the rest of the code. By using Prettier your team skips ALL disagreements about spacing, variable declarations, semi-colons, trailing commas, etc. The code just magically gets to the format you pick.

You can use Prettier from command line, or from your code editor whenever you paste or save a file. I prefer to use two solutions described in this blog post:

Let me show you how to do both.

When setting up Prettier it is important to configure it per-project. Not every project uses the same code style, thus it is important to respect the style of whatever project you are currently working in. The demo repo bahmutov/prettier-config-example has two subfolders, each with its distinct code style, enforced by Prettier. In reality, each of your repos will have its style; I am using subfolders in order to keep the example simple.

I assume you are using NPM and have package.json file inside the repository. Install Prettier

I like using JSON configuration format so my code editor helps me. In fact, VSCode understands the Prettier configuration file format via the built-in json schema. So when I edit projectA/.prettierrc.json file, I get intelligent tooltips.

Prettier tries to enforce the same code style without 100s of options, thus there are just a few settings you can change. Here are settings I am using in the first project to make it look "traditional" ES5

The second project uses more modern style without semi-colons and with trailing commas.

Because you might have global settings related to code formatting, I prefer having in each repository a file with local workspace VSCode settings. I commit this file .vscode/settings.json to source control to make sure everyone uses the same extension to format the code.

Now every time we save a JavaScript file, it will be formatted using Prettier automatically. Here is me formatting projectA/index.js file by saving it.

Notice the double quotes, semi-colons, etc - Prettier has applied the settings from projectA/.prettierrc.json. It also split long object across multiple lines to make it easier to read.

The same JavaScript code in projectB/index.js gets formatted by Prettier using different local settings and ends up looking different.

Formatting every file as you save it is nice, but we can also format ALL source files at once using Prettier CLI. In the package.json add a script to format files matching the mask and to write them back to disk.

Run this NPM script and the files will be formatted to follow the Prettier style.

If you want to format files with several extensions, list them using curly braces and commas. If you need to find all files in all subfolders, use ** syntax. For example, to format all .ts and .tsx files in the src folder use:

Whenever we work with files locally, we might accidentally commit them without proper styling. That's where Git hooks and formatting staged files comes in handy. To consistently format all files before committing and then commit changes, I recommend using husky + lint-staged combination of tools.

If you try to commit changed JavaScript files, they will automatically be formatted and re-staged, ensuring only pretty JavaScript code is committed. In the Git commit shortcut output below, the "Running tasks..." messages comes from the lint-staged tool.

Of course, you can skip the Git pre-commit hook by committing with -n flag.

You can really enforce the formatting before pushing code to the central repository by running Prettier on CI and then detecting any changed files. Just run stop-build after running Prettier.

If any of the source files were reformatted by Prettier, the stop-only will detect changed source files using Git information and will exit with an error. It will list the changed files, something like this:

Prettier has built-in command --check that validates code files against formatting. Using it from a script in package.json file:

Let's say one of the files has not been formatted.

Nothing happens on save

You are saving a file in VSCode ... and the code does not change. This could be due to three issues: 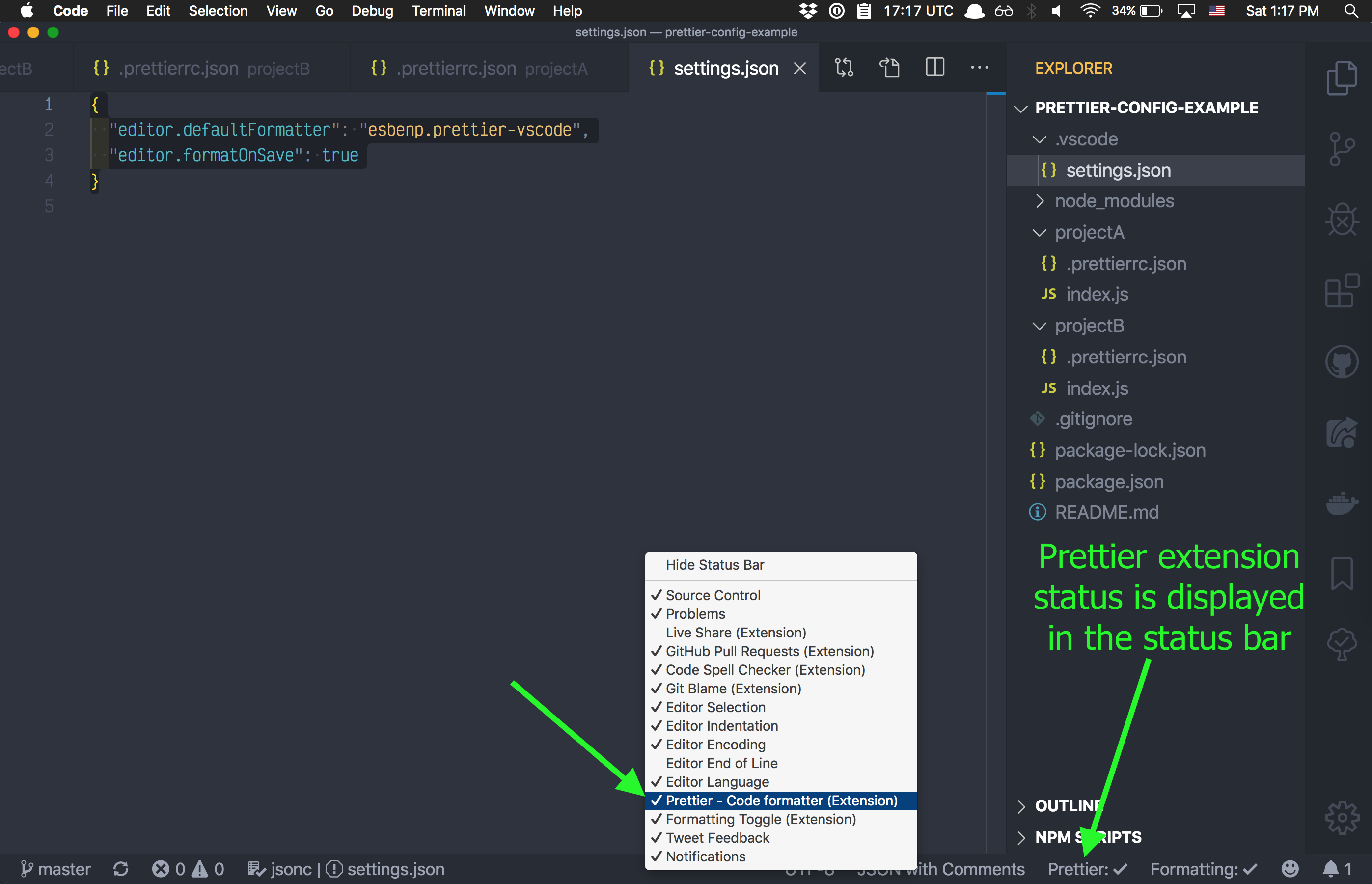 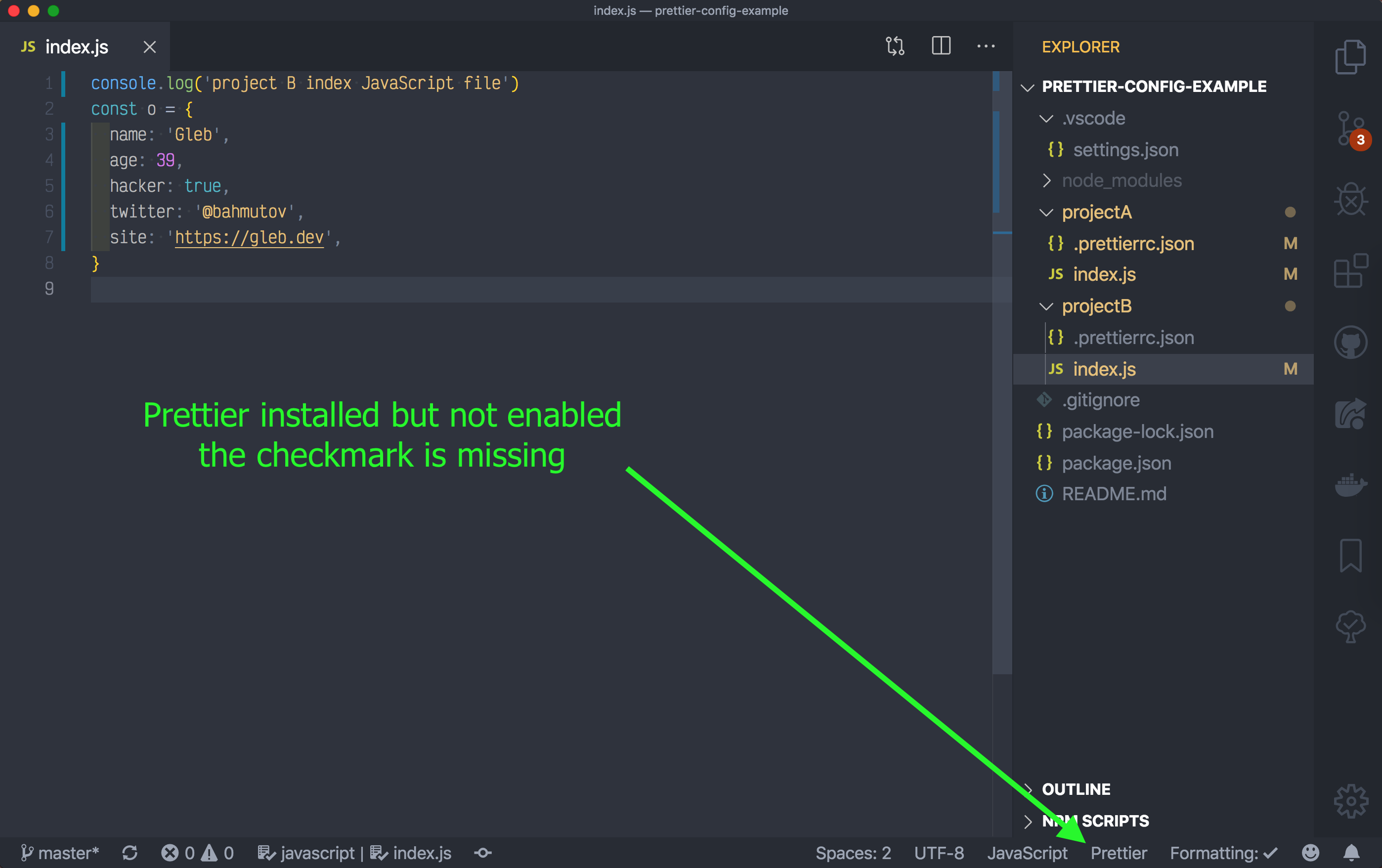 One thing I have noticed that sometimes saving a file enables Prettier if the .vscode/settings.json have the extension enabled for this workspace. For example in this animation I am saving the file with double quotes around a string, and magically the Prettier extension gets the check mark and does its job. Don't ask.

If you click on the "Prettier" extension word in the status bar, it should open the Prettier output tab. It shows what Prettier extension executes, and often shows the problem. For example, the screenshot below shows that Prettier did not run because the project does not have Prettier configuration file like .prettierrc.

If everything else fails, quit VSCode and start it again.

Here is a little animation that shows a file being saved with Prettier setting "trailingComma: true", yet the comma gets deleted somehow.

Why can't VSCode save the list of disabled extensions in .vscode/settings.json?

Sometimes you have files that should not be formatted: auto-generated source files, saved snapshots, etc. You can list file masks to ignore in file .prettierignore. For example, to ignore all JavaScript files in snapshots folders use

If you ever work in someone else's project, please respect their formatting. In order to avoid reformatting the entire file when you save it from VSCode, save it without formatting. Run "Command + Shift + P" to open the Command Palette and type "save without" until you see "File: Save without Formatting" command - use that.

In the VSCode global settings, set this option to only allow running Prettier in the folders with Prettier config file.

I definitely recommend setting this global option to avoid accidentally changing how the code looks in the projects that do not want to use your or any Prettier settings.

I love using range ignore to disable formatting parts of file. For example, to stop Prettier from reformatting Markdown tables use:

In code, you can tell Prettier to ignore the next AST node by adding // prettier-ignore comment. For example, in the next test we want to show the array input as a Tic-Tac-Toe board

Use Eslint with Prettier

Prettier reformats JavaScript code to follow certain style, it does not check the meaning of the code. For example, Prettier happily reformats the following wrong code.

Static linters, like ESLint can catch the assignment to a constant variable, so we need both:

ESLint runs a long list of rules against the code, and some of these rules are stylistic, and can conflict with Prettier's style. Thus we need to configure ESLint to skip those rules. This configuration is in module eslint-config-prettier. Install it

and can be added to your project .eslintrc.json file. ESLint will not run without a valid configuration file.

Now when you run ESLint against this file

Then ESLint will catch the const assignment error; it will also catch that the variable name is never used after assignment.

If you want to check React code that uses JSX, import / export keywords, then install a plugin eslint-plugin-react

Since we are using VSCode, it makes sense to install ESLint VSCode extension called dbaeumer.vscode-eslint

You can see these errors for yourself by opening projectC/index.js in VSCode from the example repo.

Since ESLint can detect and fix many of the errors it detects automatically, let's tell ESLint to run Prettier too. Here is the recommended setup

Point ESLint at the recommended settings which include Prettier styles

Notice in the screenshot below how ESLint warnings in VSCode editor include style errors from Prettier. 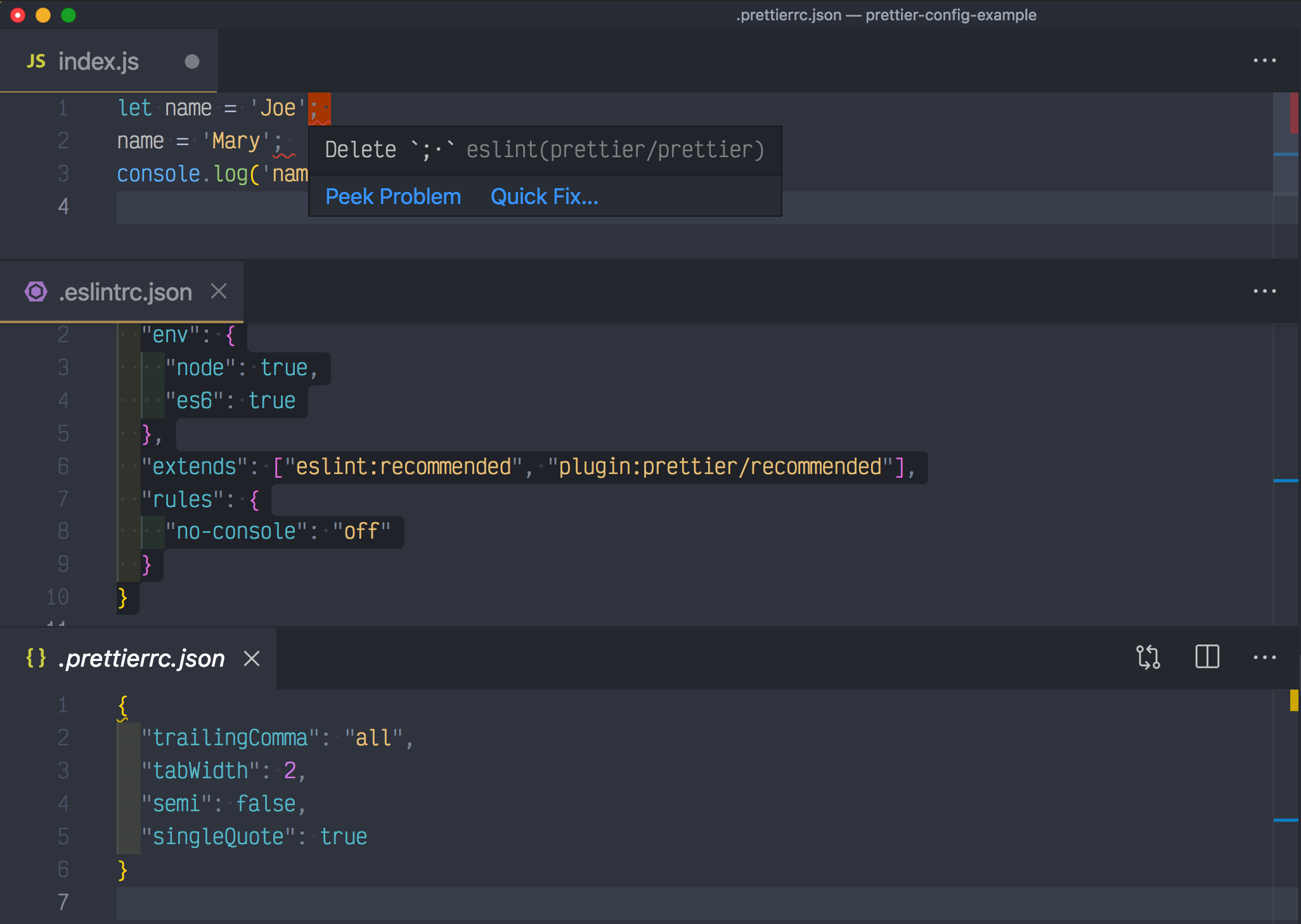 If we run ESLint with --fix flag, it will use Prettier to auto format code, solving both stylistic and semantic problems.

If you decide to use ESLint with Prettier rules and have configured husky to run lint-staged, point it at eslint --fix instead of prettier --write.

Let's configure VSCode to use ESLint to auto-fix found issues, including Prettier. The workspace settings use dbaeumer.vscode-eslint.

The animation shows how saving the file fixes both style and lint problems.

ESLint can lint TypeScript files through typescript-eslint, and Prettier can format TypeScript code. Let's set it up.

First, if you have previous installed TSLint extension vscode-tslint for VSCode, uninstall it - let ESLint do everything.

Then set the VSCode workspace settings to lint TypeScript files

Note: there is a bug in VSCode + ESLint extension where Prettier is not found. If you open Prettier console you can see the error, there is an open issue

So we see the lint and style errors, yet cannot reformat the code automatically on save. To work around this issue, use NPM script command.

Run this command and it should reformat the TS files and fix most ESLint issues.

One final touch. If you write Cypress end-to-end tests, there is an official cypress-io/eslint-plugin-cypress plugin that can catch some common test mistakes. You can find an example "test" in project-with-Cypress/index.js file.

Let's say your test tries to get back an element using cy.get command.

This WON'T work - cy.get does not return an element, like a Promise, the found element will be passed down the command chain. Notice how ESLint shows an error if you try to assign the value of the cy.get command. 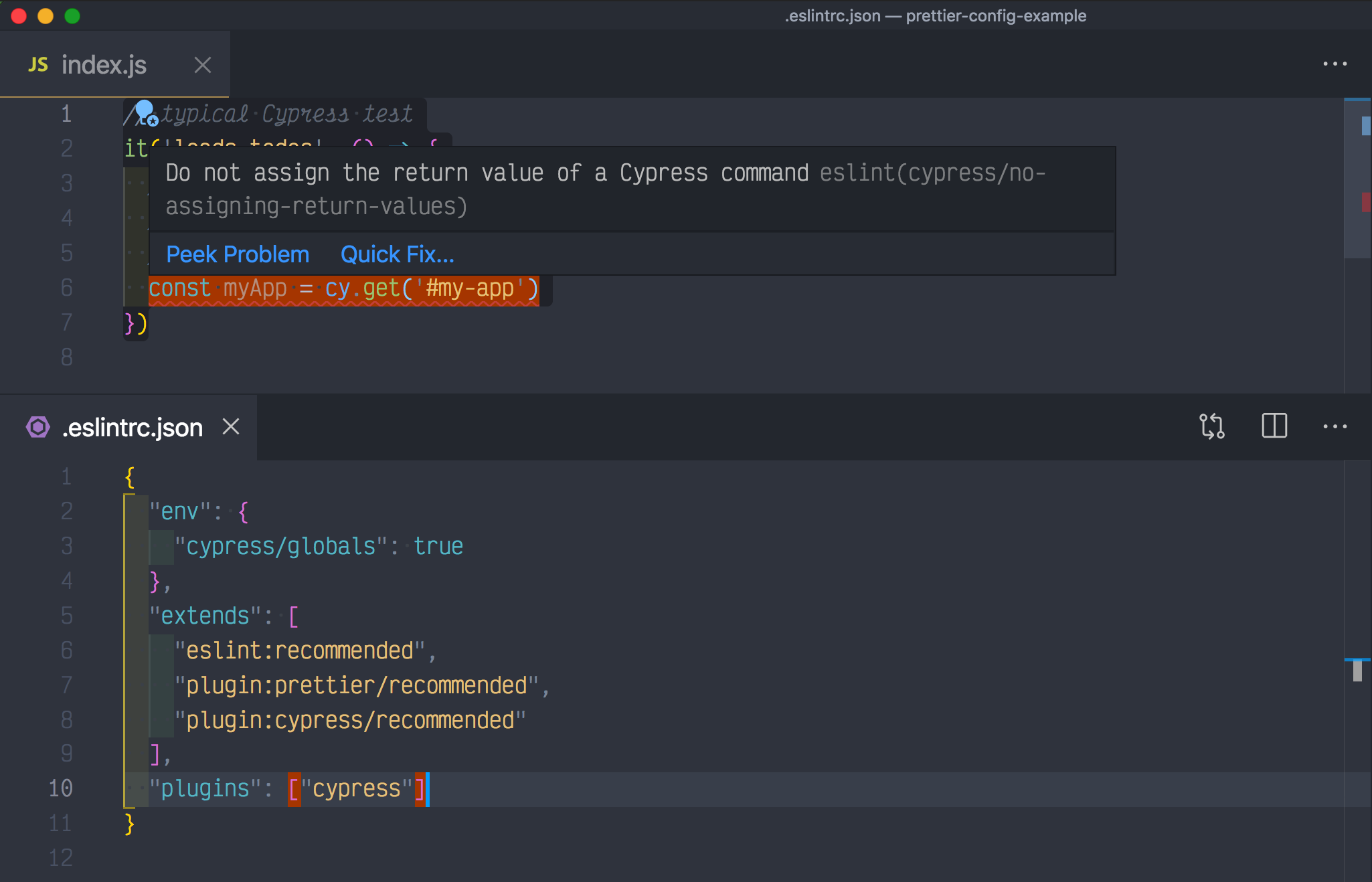 If you are writing Cypress or Mocha tests, you might accidentally leave it.only or describe.only exclusive tests. The build pipeline will be forever green giving you a false sense of confidence. You can catch exclusive tests using eslint-plugin-mocha.

See example in subfolder 'project-with-mocha' of the demo repo.

First, let's use the Mocha plugin and set the environment and globals.

Nice, by default the mocha/no-exclusive-tests rules gives a warning. I recommend running lint step in pre-commit hook, where a warning is enough. From the pre-push Git hook I recommend making this rule an error.

Sometimes you need to temporarily disable an ESLint rule. You can disable the rule for the entire file, a portion of a file, or just one line (my favorite!). For example, when showing a function signature, but not using the second argument config, we can prevent the ESLint from complaining:

To disable a rule in the same line

To disable a rule in a portion of the file

To disable a rule in the entire file (but be careful!), add to the top of the file:

For more, see the blog post How to disable an ESLint rule

ESLint's parser does not understand that you are trying to use ES2017 syntax. Set the parser option in .eslintrc.json file to handle the async / await syntax.

Format other languages with Prettier

You can configure Prettier and its VSCode extension to format your JSON files. Since there is already a default JSON formatter built into VSCode, you need to tell VSCode to specifically use esbenp.prettier-vscode to format JSON files. Here is a sample project settings file.

Let's save a JSON file.

And here is saving a Markdown with a code block - which gets automatically formatted using Prettier with 4 spaces per tab.

There is now Chrome Prettier extension that can format code blocks in text areas. Seems for now it is limited to StackOverflow and GitHub.

GitHub Actions are now generally available - and they can do lots of interesting things, including running Prettier on every push and if there are any changes, committing the code and pushing it to the repo. In essence, they are doing the hard work for you! Read Trying GitHub Actions blog post for full details, here is the relevant CI YML file from bahmutov/gh-action-with-prettier repo.

Beautiful, and on every push, if there are any format changes, the code gets updated and pushed, which you can see from the list of commits.