This blog post will show how to get a "typical" CI/CD pipeline set up that is fast yet powerful. The final pipeline will:

Here is an example TodoMVC test project - bahmutov/todomvc which is copied from cypress-io/todomvc. A typical Cypress test that adds two items and verifies that there are two items in the list looks like this:

When running Cypress in the interactive mode (cypress open) we can see each command and how the DOM looked during that moment. 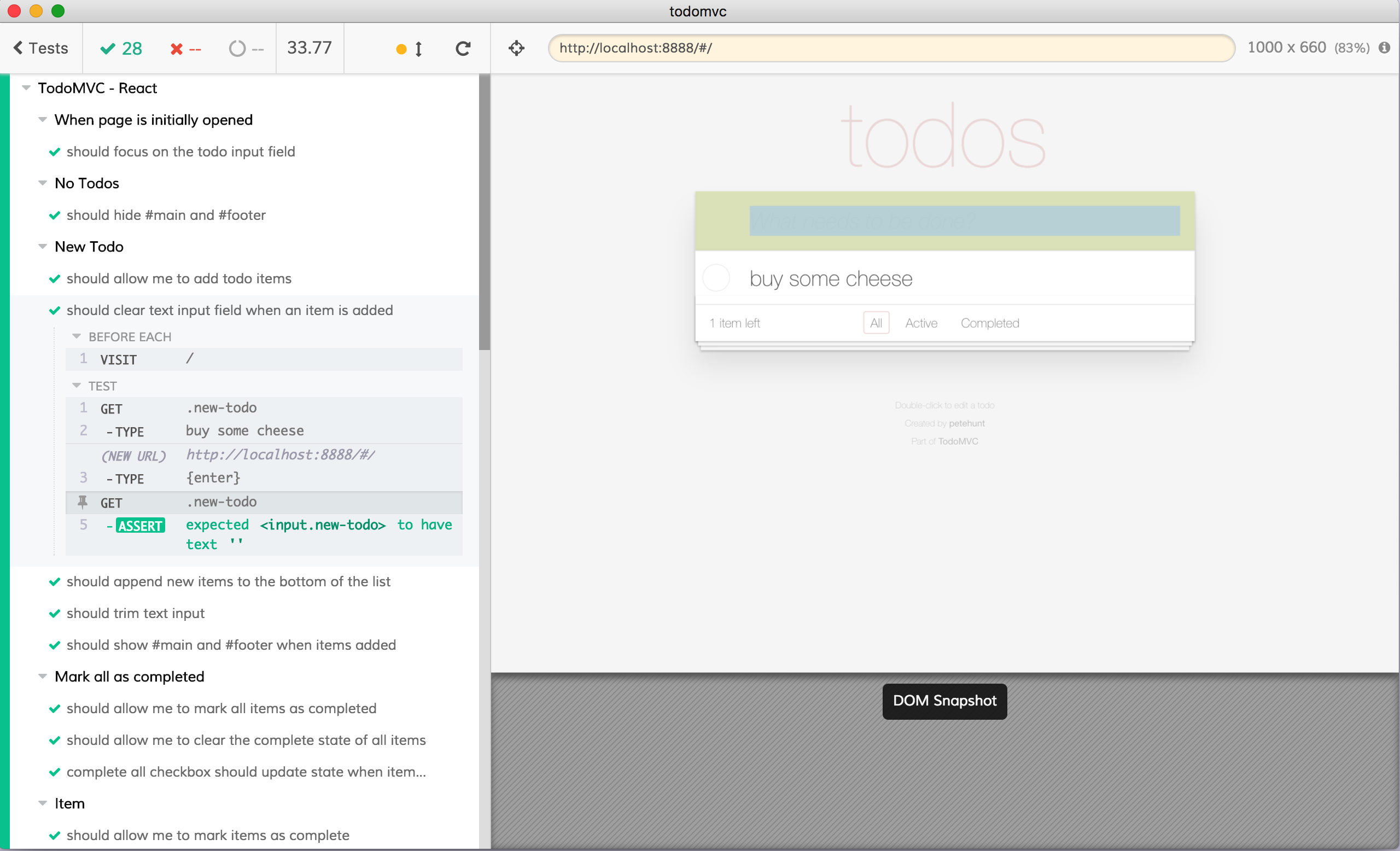 In order to run the tests we need to start the local server. There is NPM script that starts the server - we can call it from one terminal npm start and the server runs at localhost:8888. Cypress knows about this url because I put it in the cypress.json file:

Great, but I don't want to remember to start a server just to run the tests, and I always forget to shut it down after the tests finish. So I use a utility I wrote called start-server-and-test. It executes "npm start", waits until port 8888 responds, then runs the "npm test" command - which runs the headless tests. Here are the scripts

Whenever I want to run all tests headlessly I can execute npm run test:ci.

That is how I run the tests locally

Cypress works great on any CI. I like CircleCI for its simplicity and flexibility, so I set up Circle run for this open source projects and wrote circle.yml file. For now it is just a workflow with a single job that installs dependencies including Cypress binary, then runs the tests. We need to cache ~/.npm and ~/.cache folders for each build to start quickly. The build job passes all installed files to the test-locally job via CircleCI workspaces.

Great, Circle runs the tests, and they pass ... and I don't see videos or error screenshots. I need to set up test recording on Cypress Dashboard. Once I do this, and set CYPRESS_RECORD_KEY environment variable on Circle, I need to change my commands to execute cypress run --record. My full set of scripts becomes larger

And the Circle script command becomes npm run test:ci:record. Great, I can see the video of the run and CLI output at https://dashboard.cypress.io/#/projects/r9294v/runs/1/specs. Hmm, interesting, both tests ran on a single Circle machine.

Can we run 2 tests on 2 machines in parallel?

Recently we have added test parallelization to Cypress tests. To load balance all our specs across 2 machines, we need:

You can see the test run at https://dashboard.cypress.io/#/projects/r9294v/runs/4/specs and here is a totally expected thing - the total run is completely dominated by the app.js spec file!

The app.js took 34 seconds, while first.js took 1 second. So if we want to load balance these specs, we better split the longer one into smaller spec files, preferably by feature. I split app.js into 6 spec files, each with a few tests. You can find the split in this commit. Let's push the commit and run the CI again. The Cypress Dashboard shows a much better "balance" of specs!

Much better machine utilization. We don't win any time though, because of the overhead of handling each spec - the test runner needs to contact the Dashboard service, upload video file and other artifacts after each spec and ask for the next spec. When specs finish as quickly as my short example specs, in the order of below 5 seconds, the overhead matters a LOT. In more realistic situations, load balancing across 2, 3, 10 machines is absolutely crucial. And the command cypress run --record --parallel does not care how many machines will be joining - they all will be load balanced automatically.

For this static application I picked the simplest deployment - the TodoMVC app is sent to GitHub pages using gh-pages with NPM script command "deploy": "gh-pages -d dist". You can find the deployed version at https://glebbahmutov.com/todomvc/.

Ok, the deployment is simple to do from the local terminal. What about deploying from CircleCI? Well, when you use workflows, it might be tricky. Here is how to do this, and you can always consult circle.yml.

I will add another job to run after local tests pass.

It is also a good idea to only deploy from master branch, which we can control using from the workflow

Except the deployment is NOT happening due to a weird problem 😖

The Circle job is hanging, and has to be killed manually. You can tell SSH to trust github.com using a command ssh-keyscan -H github.com >> ~/.ssh/known_hosts except if you add this command to the deploy job it is NOT working.

Great, the pipeline goes through and deploys the dist folder to the GitHub pages.

So now that our application is deploying to "production" environment, we should ... test it again. Because who knows - the production application might be misconfigured, missing files, assume a different base url, or something else. We want to make sure the deployment went smoothly. We don't have to run all end-to-end tests, but we can run just a few sanity tests.

So we want to do two things:

I have added a new script name

And one last thing - we want to record this test on Cypress dashboard and even add it to the same run as our load balanced job did. Because really, this is part of the same CI workflow execution, so it makes sense to show them together as a single logical run. Except we do NOT want to mix it up with all the tests 2 machines executed in parallel. This is possible - just mark this test as a different group with cypress run --group <name> option.

The new pipeline finishes, and the Cypress Dashboard run shows two groups of tests - the smoke test with a single spec, and "unnamed" group with all specs (load balanced). You can see this run at https://dashboard.cypress.io/#/projects/r9294v/runs/18/specs 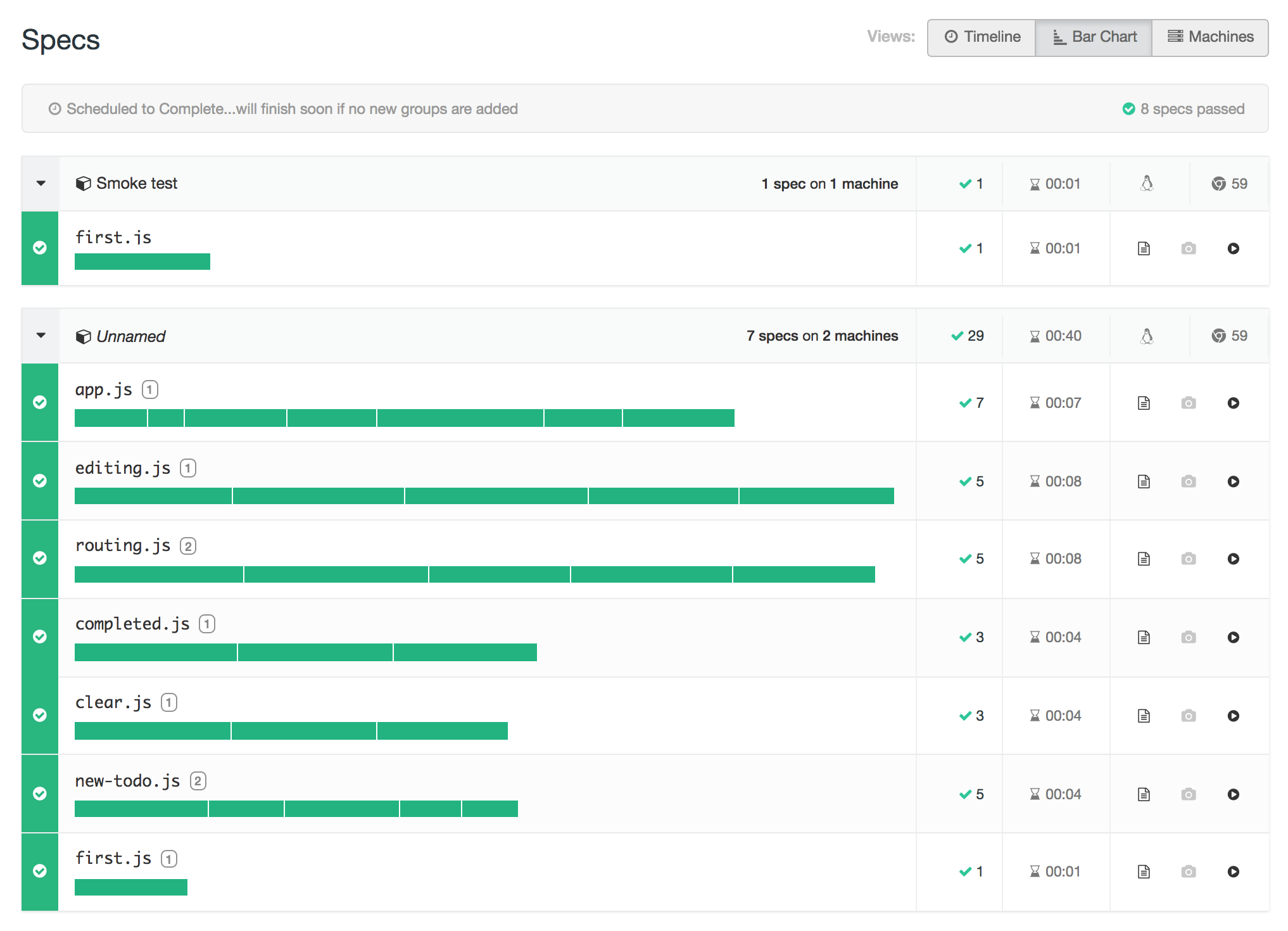 Of course we could have given that group a name, because you can combine the two options, like cypress run --parallel --group "all tests". Read more about options how to group and parallelize test runs in Cypress parallelize docs. For now here is the overview of the final CI workflow.

Our pipeline runs a deploy job between running all tests and running smoke tests. Sometimes the deployment takes a long time. Which means that by the time the smoke tests start, Cypress Dashboard thinks the run has already finished and no new groups should be added.

Every time a group of tests finishes, the Cypress Dashboard starts a countdown, waiting for any new groups to join. Once the countdown gets to zero, the run completes, and no new groups are allowed to join; the run is finished. 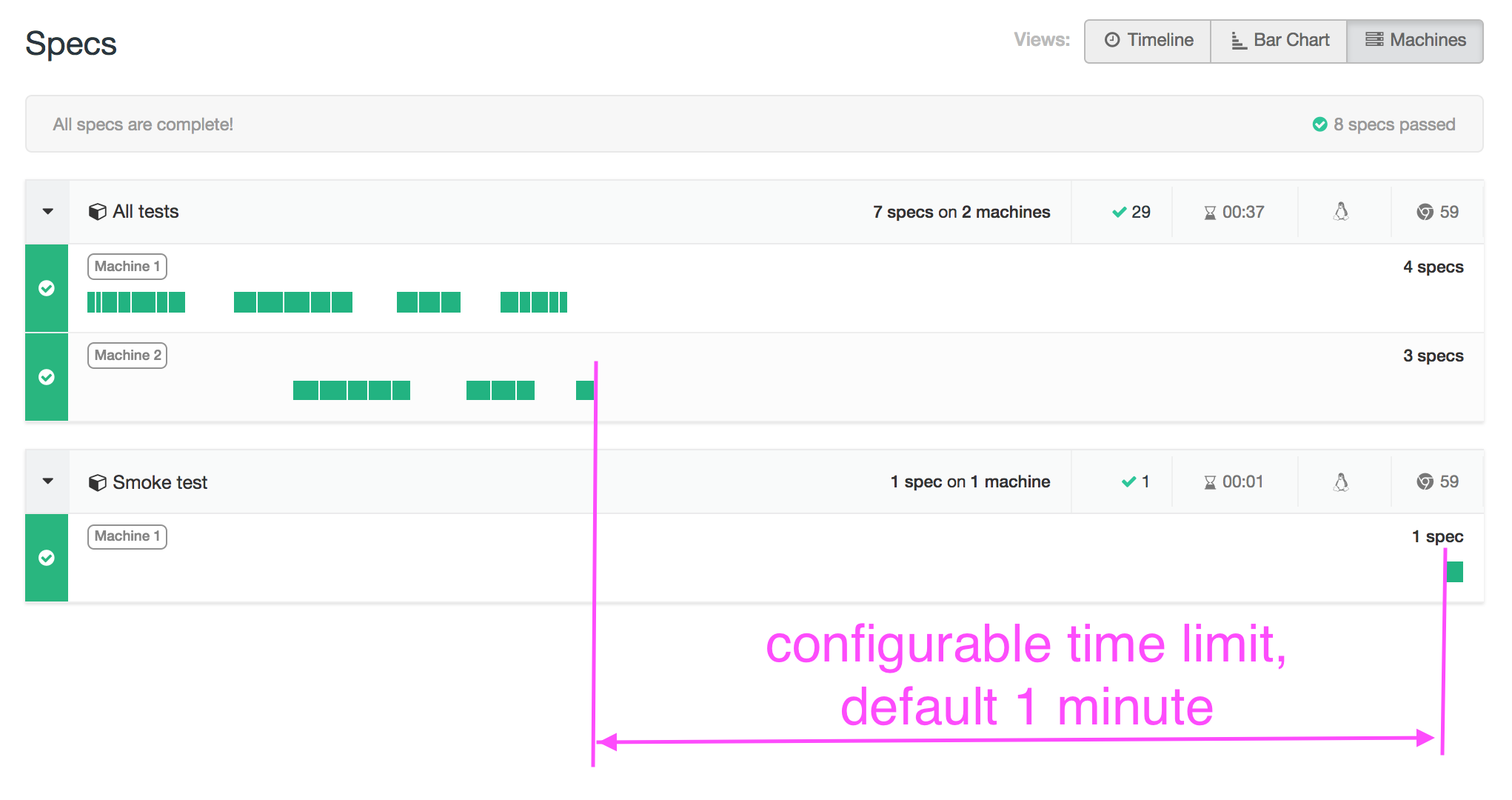 Here are the good news: you can configure the time limit on per project basis. Go the project's settings in the Dashboard and set a longer time limit.

By picking a longer time limit, you can get any pipelines passing, like Netlify + Cypress or Zeit + Cypress and see all tests together.

Happy testing, and of course keep reading my Cypress blog posts here and at the Cypress official blog!