From my experience, it is easy to have the negative assertions pass for the wrong reason. This blog shows a common mistake I see when testing if the loading element goes away.

Imagine our TodoMVC application loads the Todo items from the backend on startup. The loading element markup changes the visibility based on the app's data:

🎁 Find this example in the repository cypress-io/testing-workshop-cypress.

So we can write a test that asserts the loading indicator goes away when we visit the page.

The test is very quick - our server runs locally, there is no data, thus the entire call happens very quickly.

Notice the Command Log on the left side shows the XHR request happening after the negative assertion passes. This is a red flag - did the assertion pass before the application actually started loading?

Our application can take a short period to bootstrap or scaffold itself before it makes an Ajax call to the server. Can the assertion cy.get('.loading').should('not.be.visible') pass before the Ajax call starts? The test application I use can be "slowed" down by passing a search parameter. Let's start the Ajax call three seconds after the page load to see what happens:

The above test passes for the right reasons.

Note that I called the above test flakey - because the loading element flashes so quickly that sometimes Cypress does not "see" it via its command retries. This is when test retries come in handy

Here is a screenshot of the first attempt failing to "catch" the loading element, and the second attempt catching it. 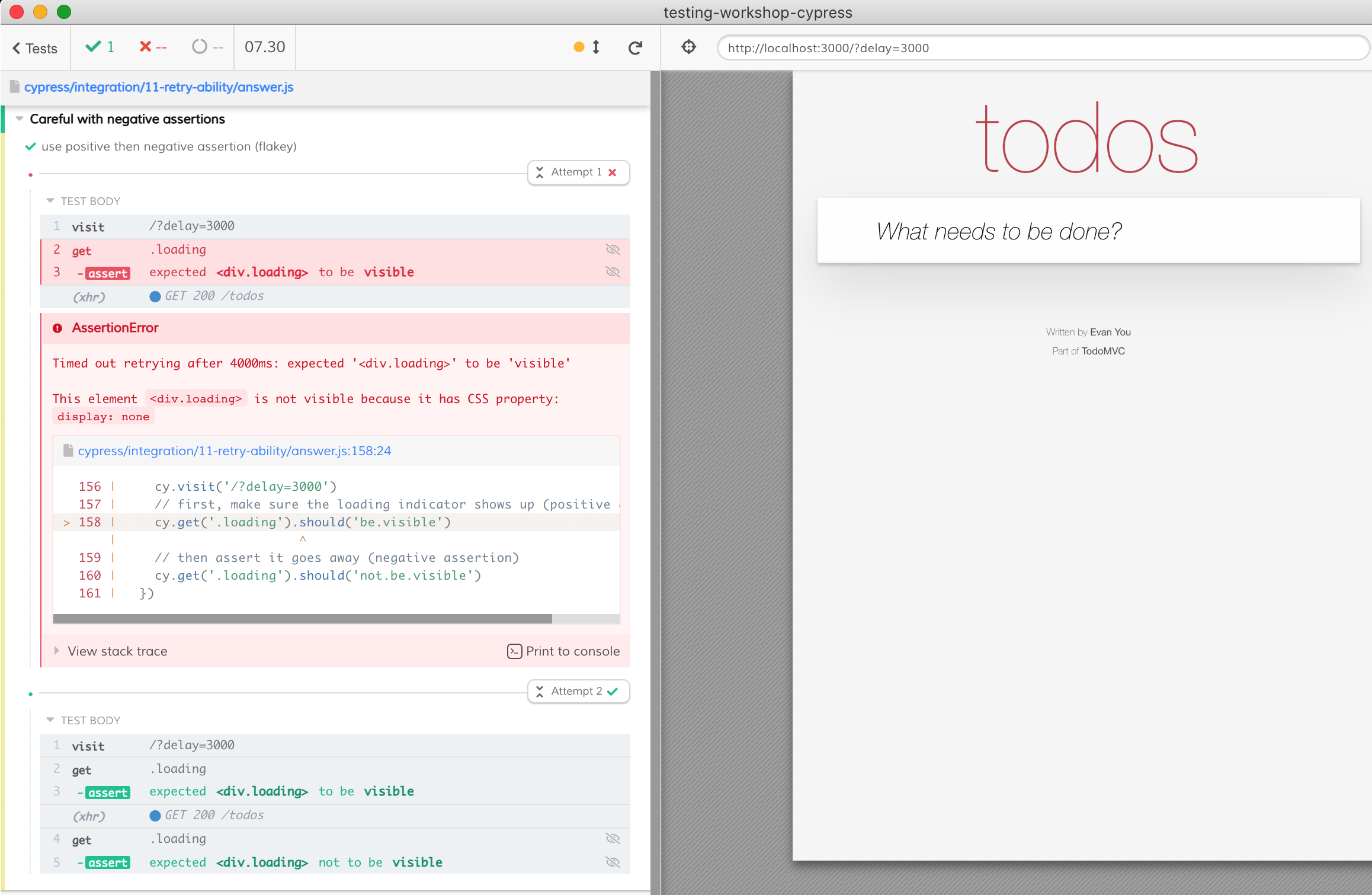 We can make the test better in other ways. For example, we can stub the call to the server and delay it to make sure the loading element clearly stays visible. This has additional benefit - the loading element state will be clearly visible in the spec's video captured by Cypress on the continuous integration server.

🤷‍♂️ Wondering why I used delayMs: 5000 and not simply delayMs: 2000 for a 2 second delay in the test above? Because while writing this test I have discovered that cy.intercept sets the time NOT from the request but from its own execution timestamp, see #14511. In the test the page load takes 3 seconds, thus the response with 5 second delay from the start of the test would have the server "respond" after 2 seconds.

Here is another example of negative assertions leading to flaky tests. In our Cypress RealWorld App the following test was constantly generating visual differences and failing the Percy check:

The good snapshot from the develop branch shows non-blank main area. What is going on? Let's run the test using cypress open and use the time-traveling debugger to inspect the DOM snapshot at the moment the negative assertion passes.

Let's tighten it. Once we reject the transaction we want to wait for the application to render the default view and then take the snapshot.

Once we fix this one test, let's search the spec file for other negative assertions. As you can see there are five tests that use negative assertion before taking a visual snapshot. These tests are also flaky and needs to be strengthen against the race condition.

Following the above example I add a positive assertion before the visual snapshot to tighten these tests against the flake.

Of course we can approve this visual change to have the correct baseline images from now on.