This blog post multiples ways to pick a random item from a fixture file, and then reuse that picked item in multiple Cypress tests. We will look at fixtures, aliases, hooks, and custom commands.

We can inspect the application code to see how to fetches the user, it fetches it from the REST resource on load:

📦 You can find the application and the test for this blog post at bahmutov/cy-user-register-example repository.

Our application has a very simply database implemented using json-server utility. It servers the REST resources from the db.json file. Currently we have a single hard-coded user object there.

Having a single permanent user is no fun, what is the point of that? So let's reset the database /users list before each test, and instead place our test user there. Then we can verify the test user is displayed on load. We are including the json-server-reset middleware module for this:

From the test we can send the POST /reset HTTP message using the cy.request command. 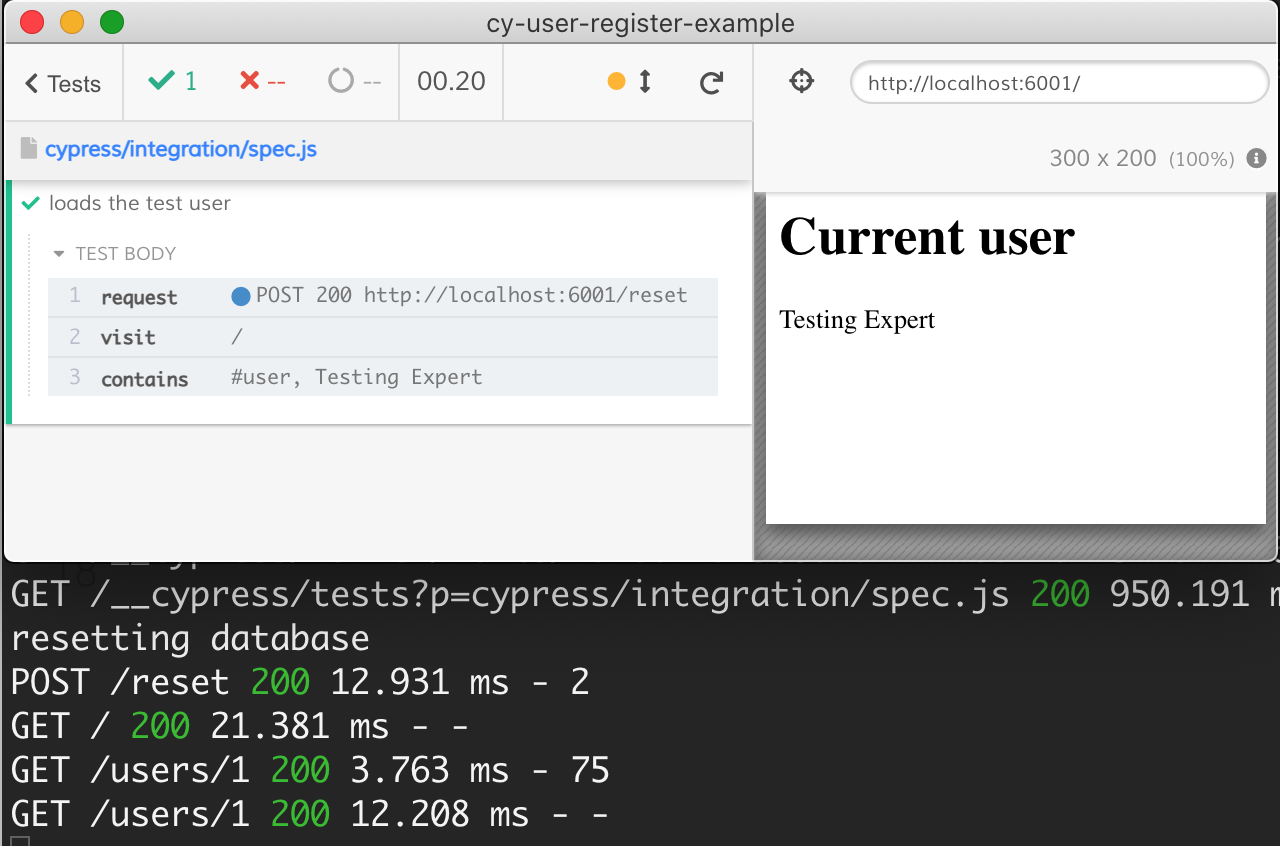 It is no fun to always see the same one user. Let's have a list of users to test with instead. We can pick a random user from the list when starting the test. Here is our fixture file: notice that every user has the same id 1 - because that will be the resource id later

Our test can load the entire object from the cypress/fixtures/data.json file using the cy.fixture command, then pick a random user and send the POST /reset request.

If we run the test several times, it shows a different user.

Using a before hook

If we have several tests, we do not need to reset the user inside each test. Instead we can reset the test once using the before hook. We just need to decide how to pass the picked testUser object from the hook to the test, because it needs the name to find on the page.

The test passes, we can see the alias set using the .as command.

Unfortunately this implementation has a problem: all aliases are reset before each test. If we add another test that needs the testUser object, it would fail. 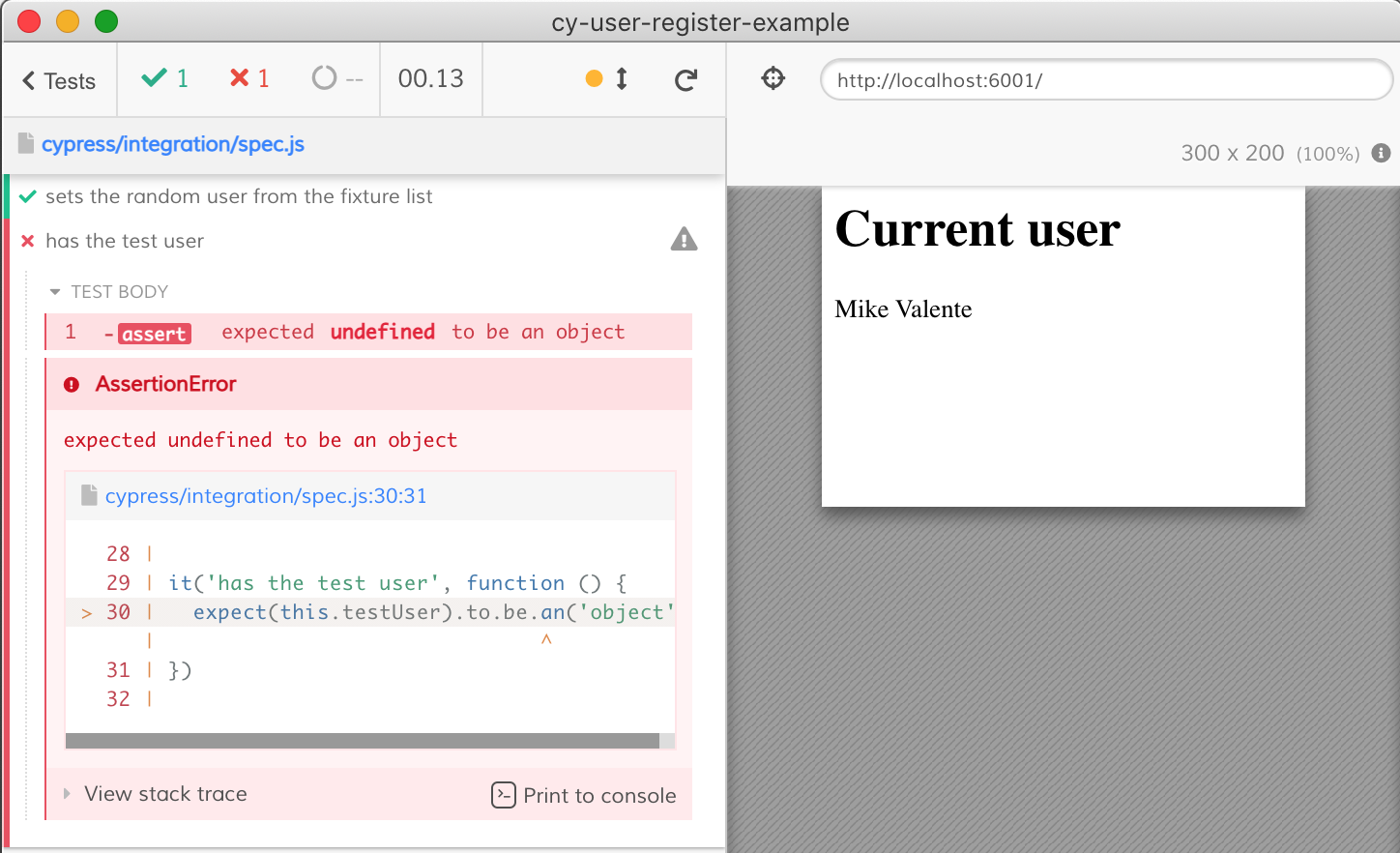 Use a common variable

We solve this problem in several ways - it is just JavaScript, after all. For example, we could store the test user reference in a variable in the shared lexical scope bypassing the alias.

Use before and beforeEach hooks

We can still use the hooks and aliases. We can pick the user once, and then reset the database and set the alias before each test using the before + beforeEach hook combination.

The tests pass, the user is generated once in the before hook, and the beforeEach hooks reset the database to that user, and set the alias to be available in every test. 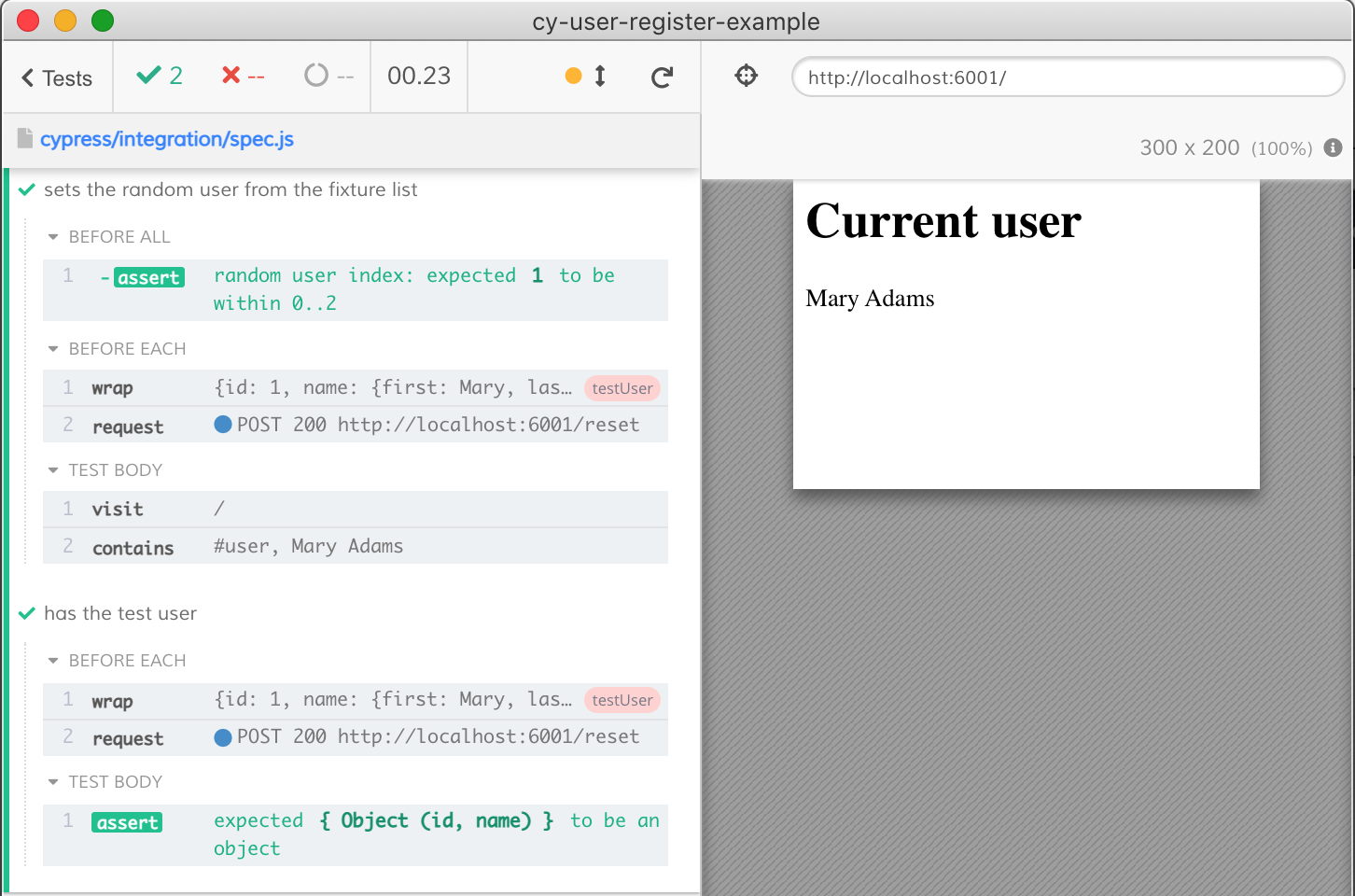 There is another way to store and pass a value: Cypress.config command. Under the hood it is nothing but a plain object, and we can store any values there. Who is going to stop us? There is no Cypress police to tell the users what to do.

I prefer a different method for storing and retrieving my own values - Cypress.env. It works exactly like Cypress.config under the hood - just a plain object to store your properties.

If we always want to pick a random user, might as well make it into a reusable command. First, let's write a single custom command to pick a user and reset the database.

Using Cypress.env to store data has one small advantage: at the end of the test or while pausing it, you can always fetch the current value by opening the DevTools console and simply running Cypress.env('testUser') command - all methods on the Cypress object are always available and can be executed at any time. 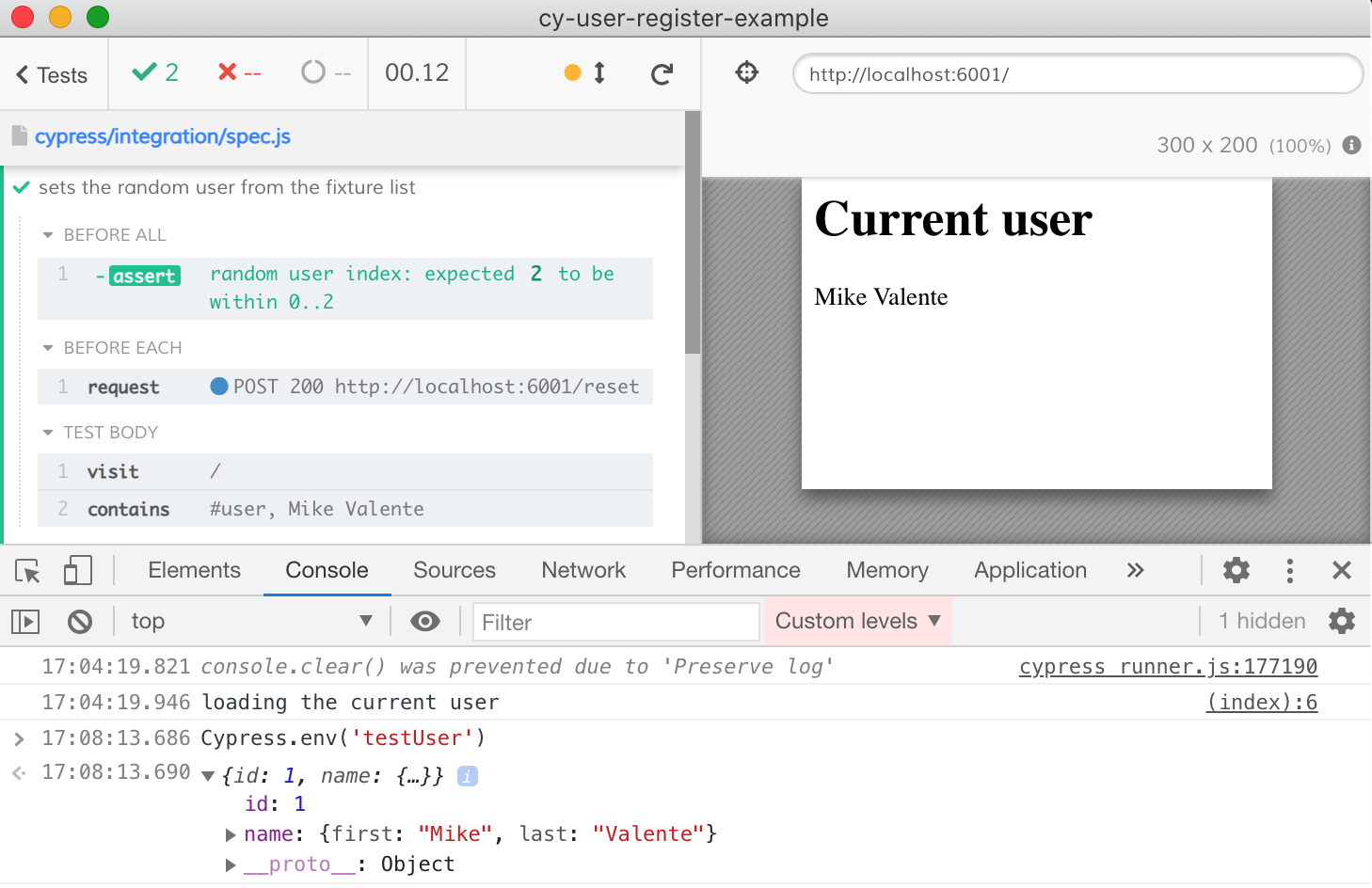 Picking the random user does not need to use Cypress.env or other methods to yield the testUser object. Instead it can use a memo pattern. If the value does not exist (we can use a local variable for example), then we can generate the random user and remember it. Next time, we can simply return that value.

If you inspect the Command Log, you can confirm that the random user was indeed picked once, and then the same user was yielded before each test. 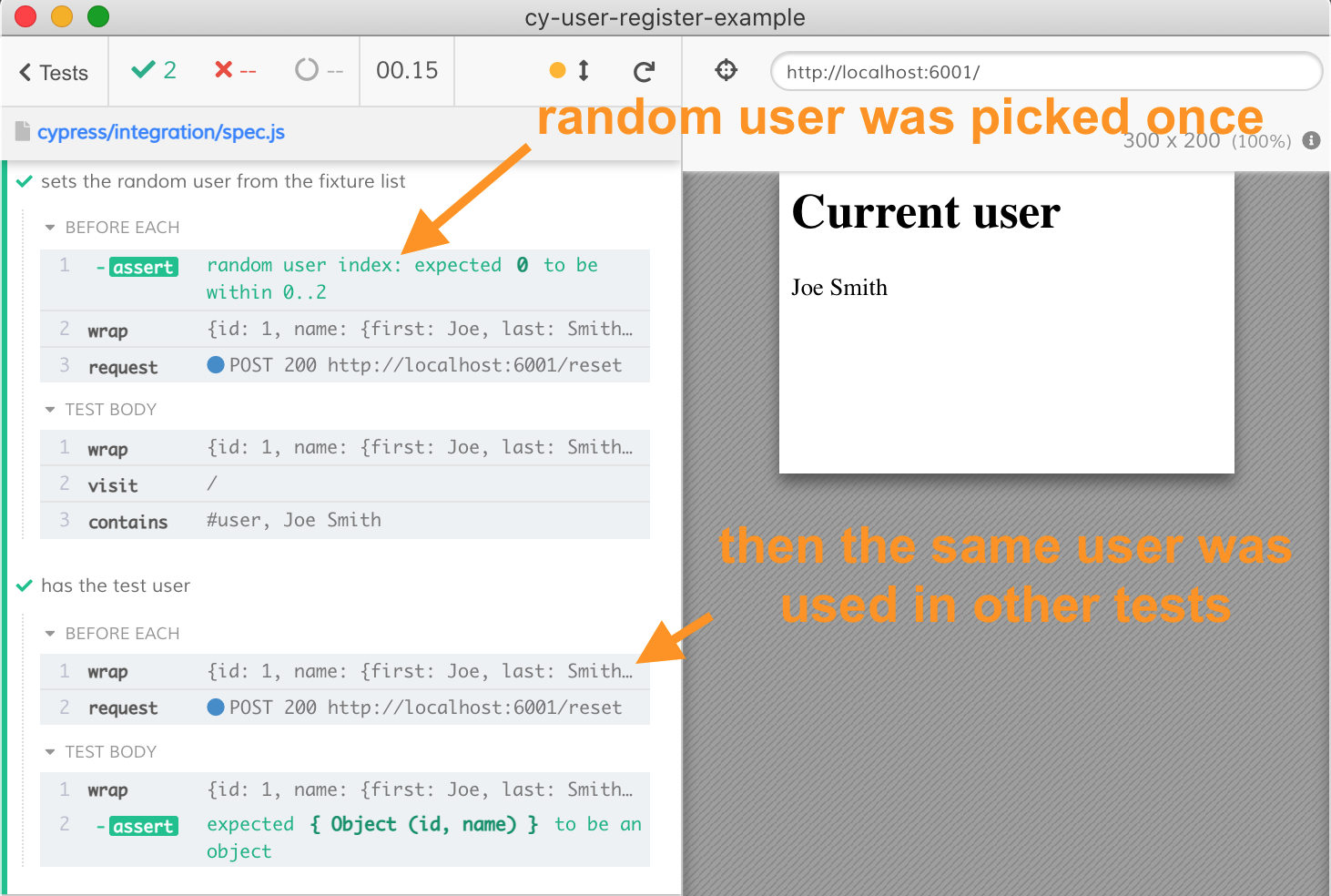 Note: since we have just one custom command, I simply placed it into the cypress/support/index.js file. If we had many custom commands, I would have them in their own JS files and would import them from the support file.

Our list of users comes from the JSON fixture file. We can directly import or require this JSON file from the JavaScript files, our bundler knows how to load a JSON object. Thus picking of the test user could be rewritten as: 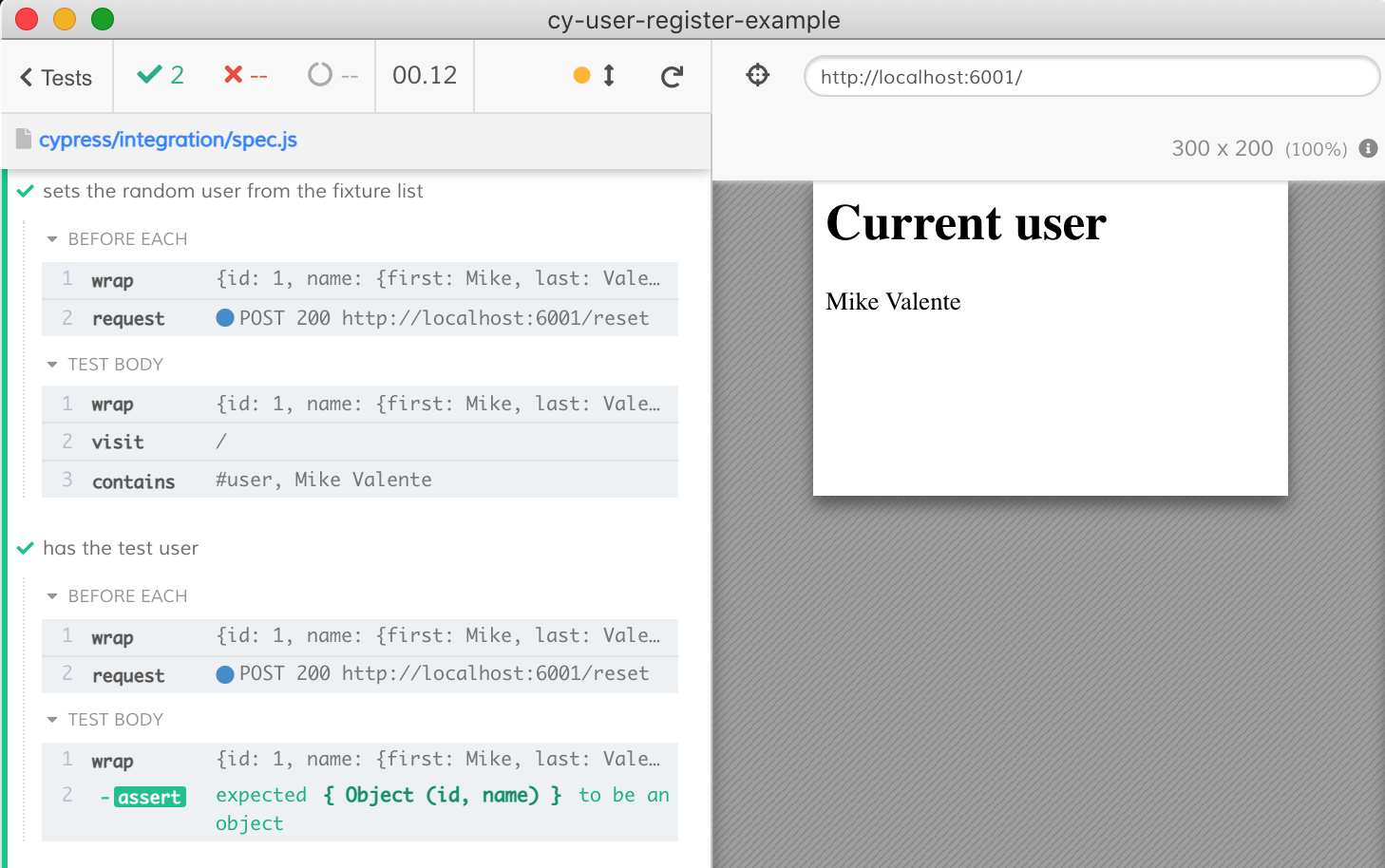 Notice the difference: we had an expect(k, 'random user index) assertion outside of any test. Such assertions when passing do NOT show up in the Command Log at all. If they fail, Cypress does show them. Let's modify the assertion to make it fail to see it: 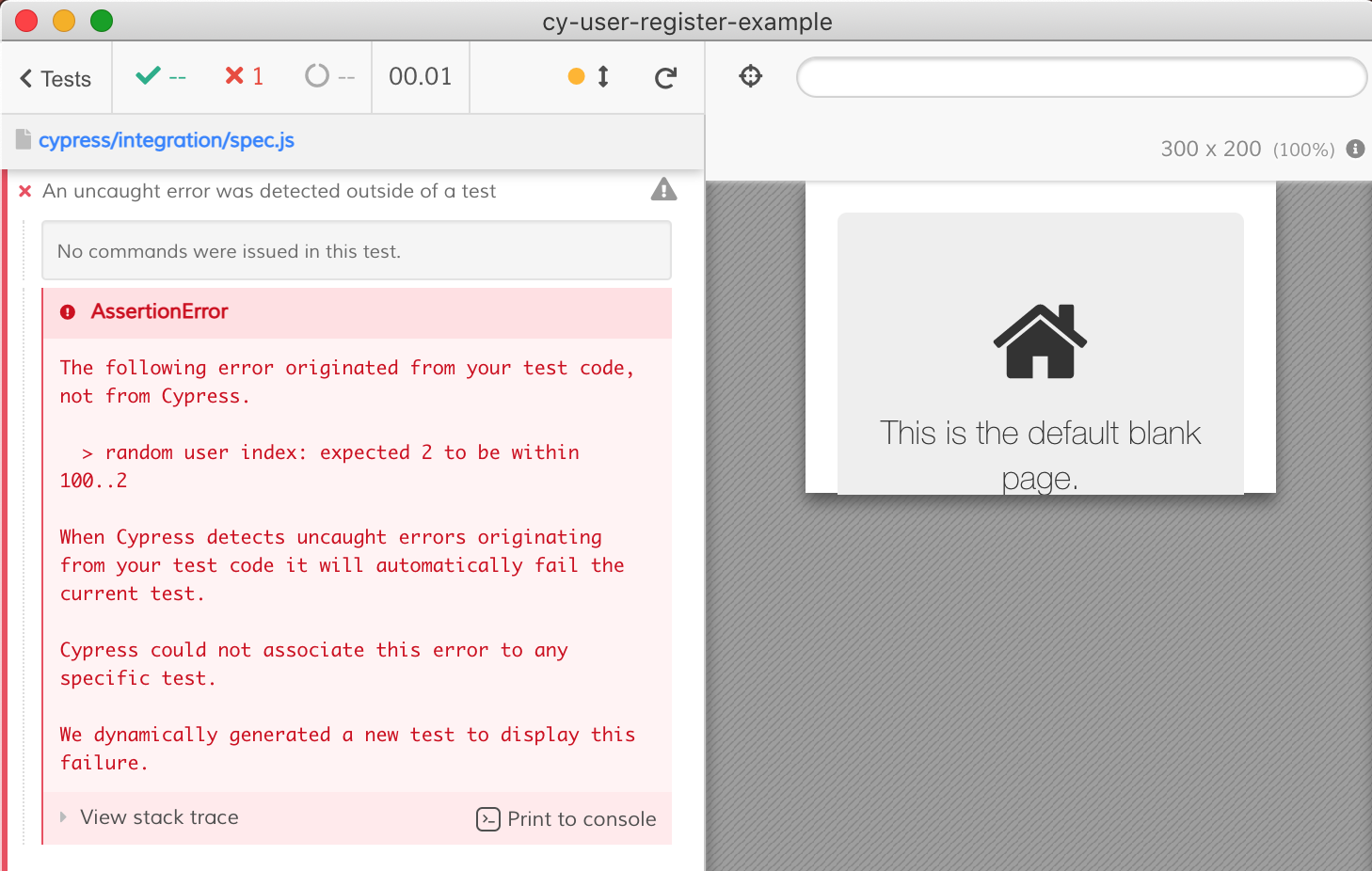