Note: this blog posts closely follows How to write effective tests for React apps with react testing library? but uses Cypress and cypress-react-unit-test to write tests that work in the real browser.

🎁 You can find the source code for this post in the bahmutov/effective-react-tests repo.

Let's create a few React components, and I will use react-scripts to bundle them

After we have installed half of Internet, let's write a component that submits a form.

Let's test it to ensure that the Age input has attribute type=number, and the Submit button is disabled when the Name field is empty.

Cypress is a full end-to-end test runner, and cypress-react-unit-test is an adaptor that allows Cypress to mount React components. Once mounted, the components become full-fledged web applications, and you can use all Cypress commands to test the application like a real user would.

Open Cypress once to scaffold its spec files

Cypress can detect and hook into bundlers using react-scripts (CRA), Next.js, Babel, and Webpack configs. In this case, we confirm that we want to use create-react-app settings used by the app. Then the wizard shows the code to paste into the cypress.json and cypress/plugins and cypress/support files to make sure the tests are bundled using your application's settings. 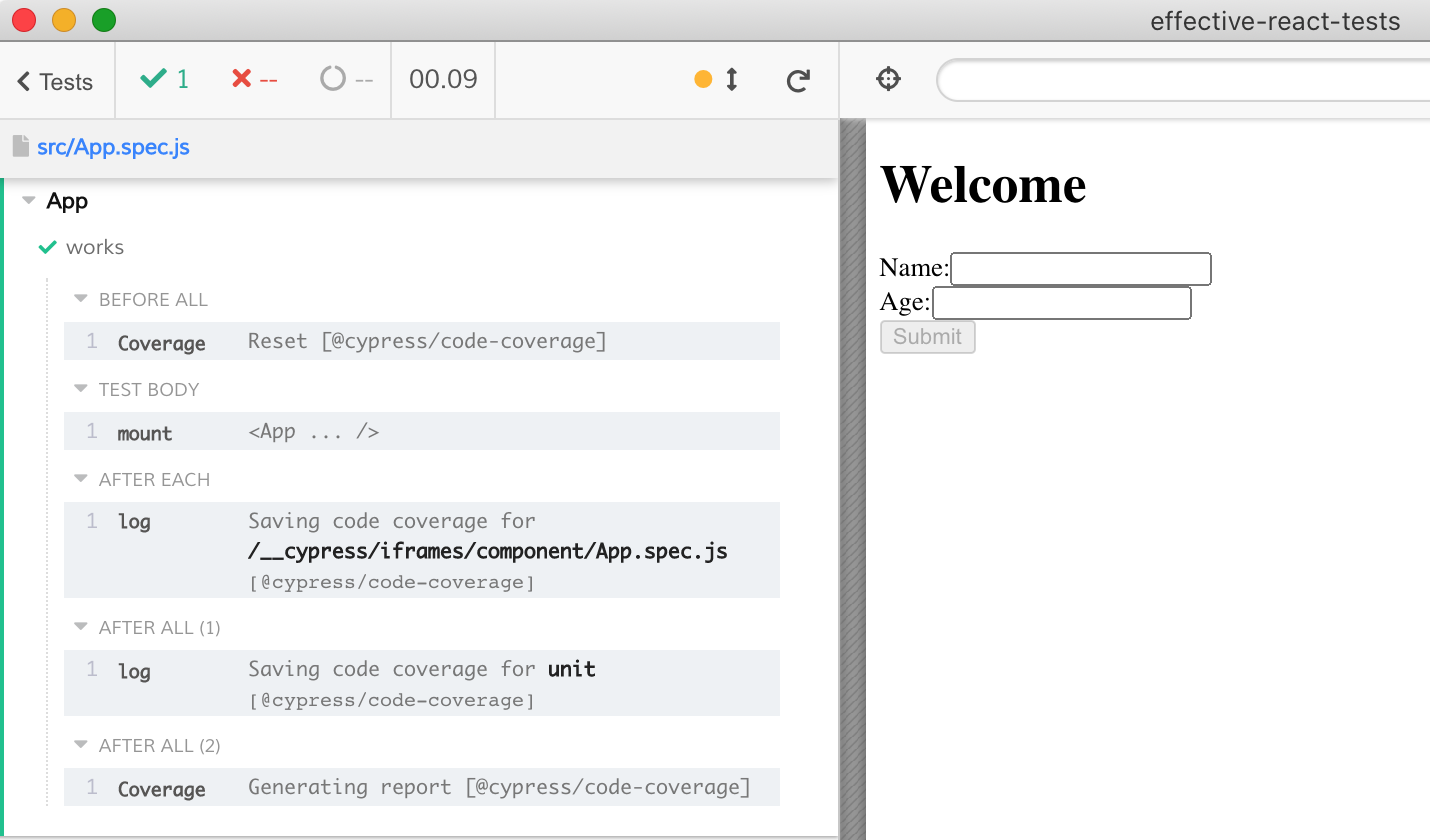 Once we mount the component, we can write the test to check everything it needs to do. I am showing writing the test in the short video below.

The final test checks the Submit button, the welcome message, and the Age number input: 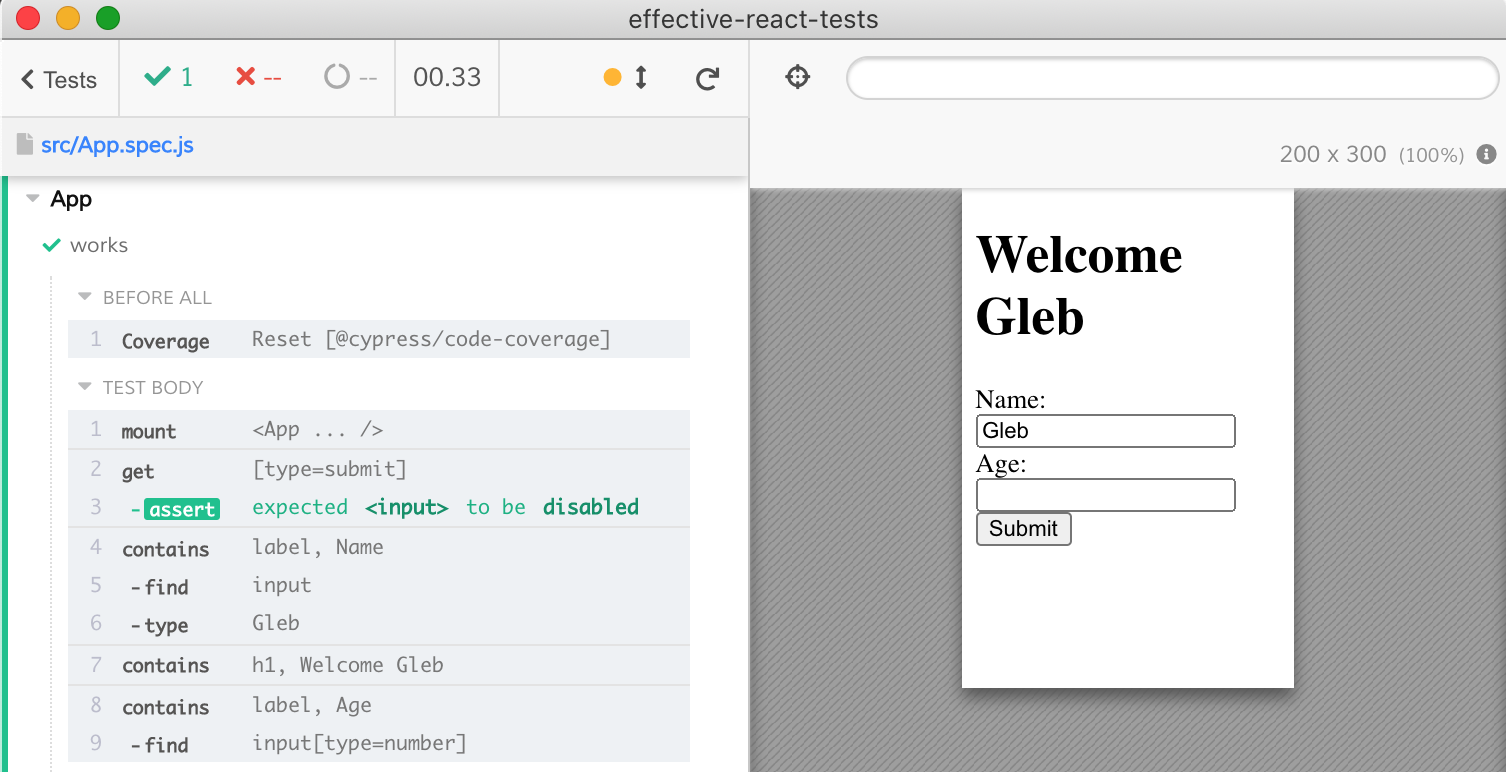 Note: you can argue that cy.contains('h1', 'Welcome Gleb') unnecessarily ties the text to the <h1> element. You might say the exact selector is an implementation detail. In that case, you may use command cy.contains('Welcome Gleb') to search just by text or regular expression, or use some other selector - it is your choice.

Code coverage is built into cypress-react-unit-test and does not need further configuration. Every time we run the tests, the coverage report in different formats is saved locally. Open the HTML static report to see every source files and how it was covered by the tests. 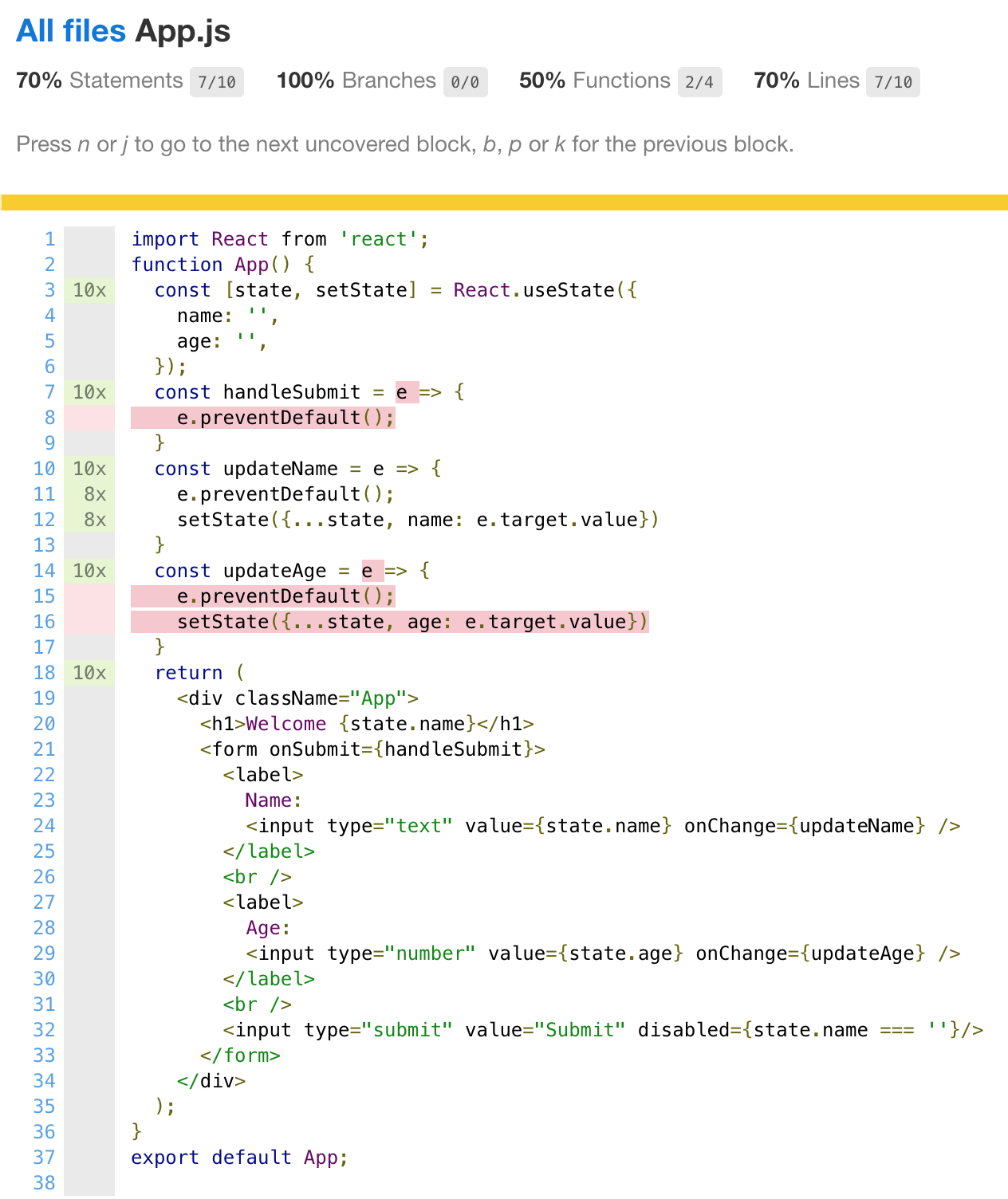 You can extend the test and make sure every source line is executed. This end-to-end and by extension the component tests in the real browser are an excellent way to quickly reach 100% code coverage.

Let's look at a form and see how we can confirm the right data is being submitted. Let's take a Form component below

It uses api.js to submit the form

Imagine we are writing a test for the Form component using cypress-react-unit-test. How would we go about confirming the form executes a network call correctly with expected parameters?

We can submit the form using the user interface

How should we confirm it?

We can confirm the form has been submitted using the DOM change.

Now let's confirm the form is being sent to the server with the right data. We can spy or stub the form submission in several places, as shown in the diagram below: at the module boundary, at the window.fetch level, or at the network call level. 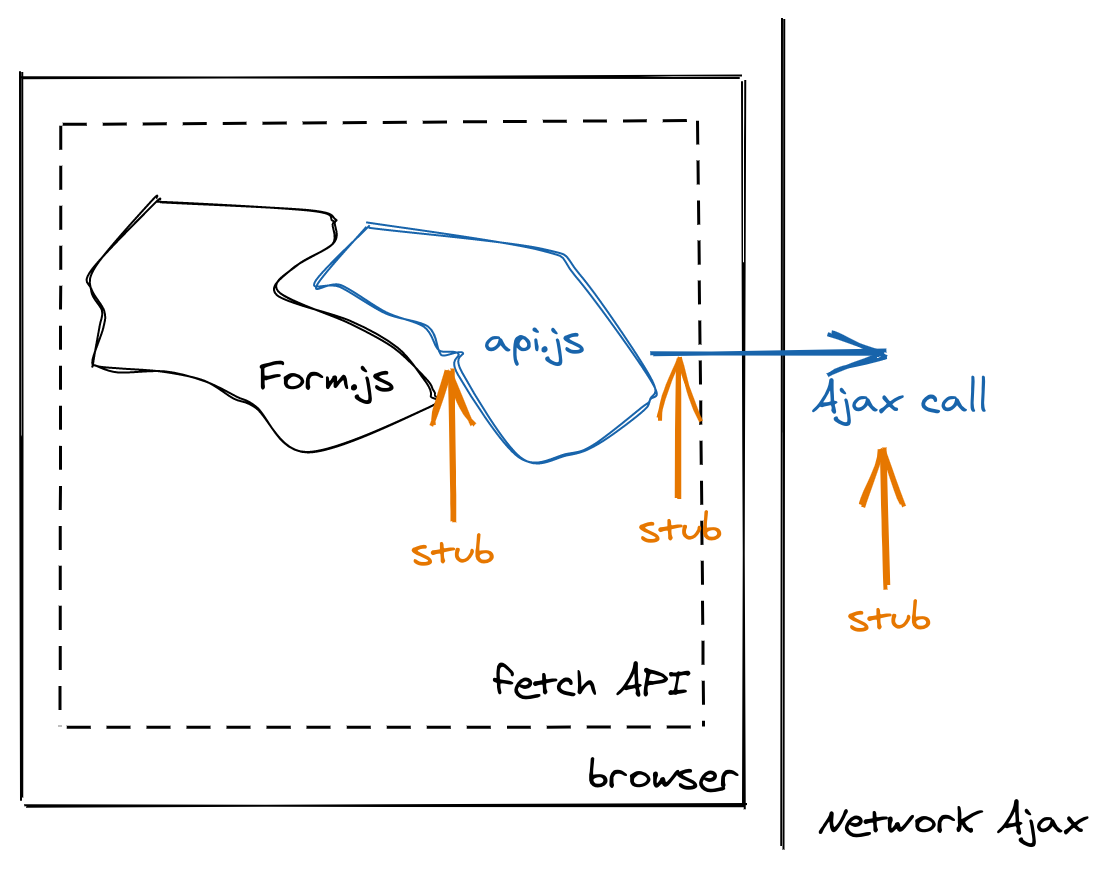 Let's see an example of every stub in action.

💡 I personally recommend stubbing Ajax requests at the network level. Stubbing at the module API level is prone to changes when the components change. Stubbing at the window.fetch also seems like stubbing an implementation detail, while network control gives you a superpower.

Well, the Form component is using api.js module to actually post the form. Maybe our test can use the module's method to assert the submission? Yes you can! Any ES6 export can be spied or stubbed using cypress-react-unit-test.

Here is the test that stubs the module import from api.js module and confirms it was called with expected arguments 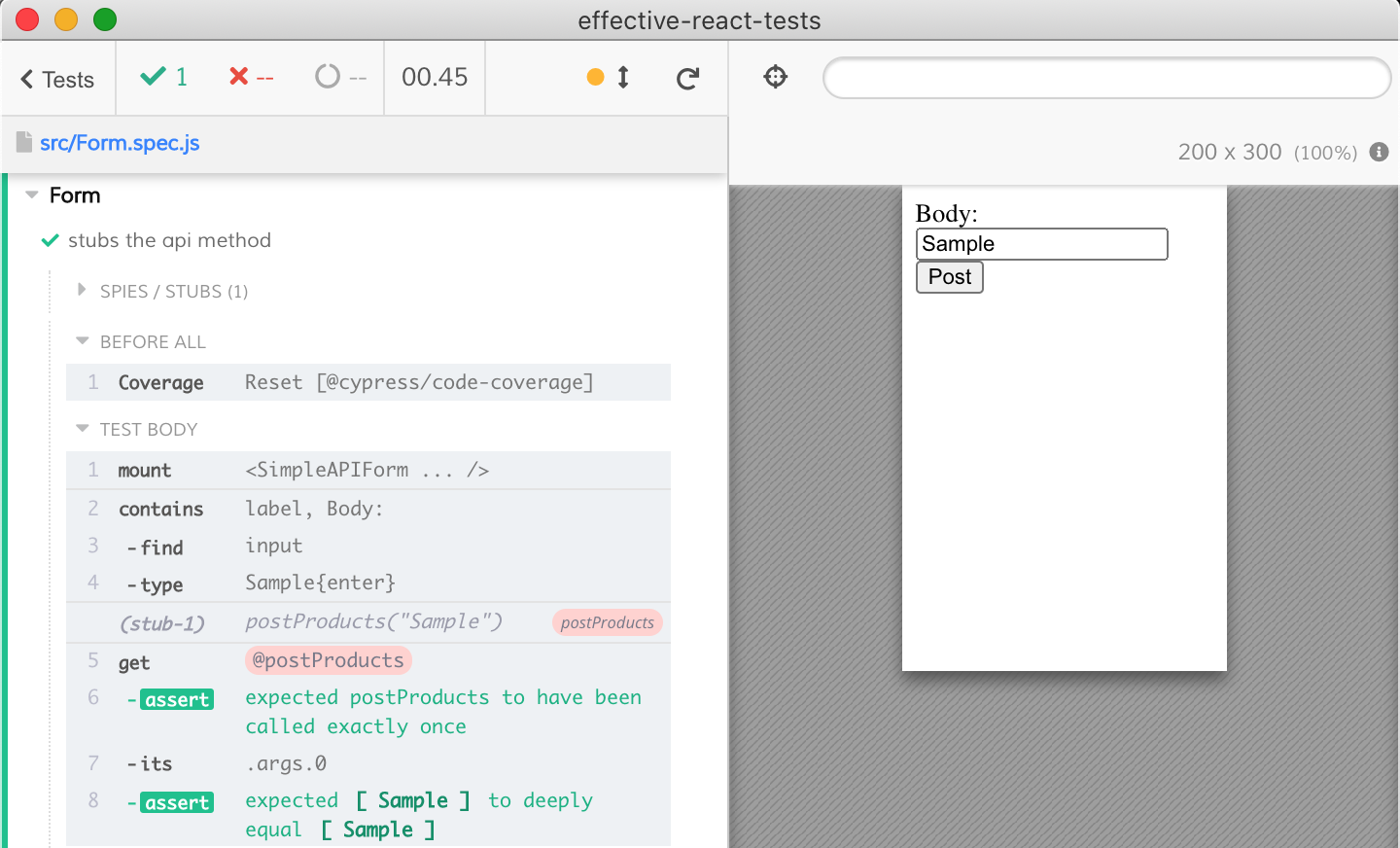 We have just stubbed the internal module import from Form component to the api module it is using. The internal APIs of the code we write is always fluid and hard to predict - since we and other teams control them. Plus we want to test the api.js code too! Thus it might be better to intercept the window.fetch call the api.js module is making - because the fetch API is standard and will not change.

Let's stub window.fetch method instead. This is the method api.js is calling after all to send the Ajax request to the server. If we can observe it, then we can refactor Form and api modules and as long as the test is passing we will be good.

The test is passing - the window.fetch is happening as expected 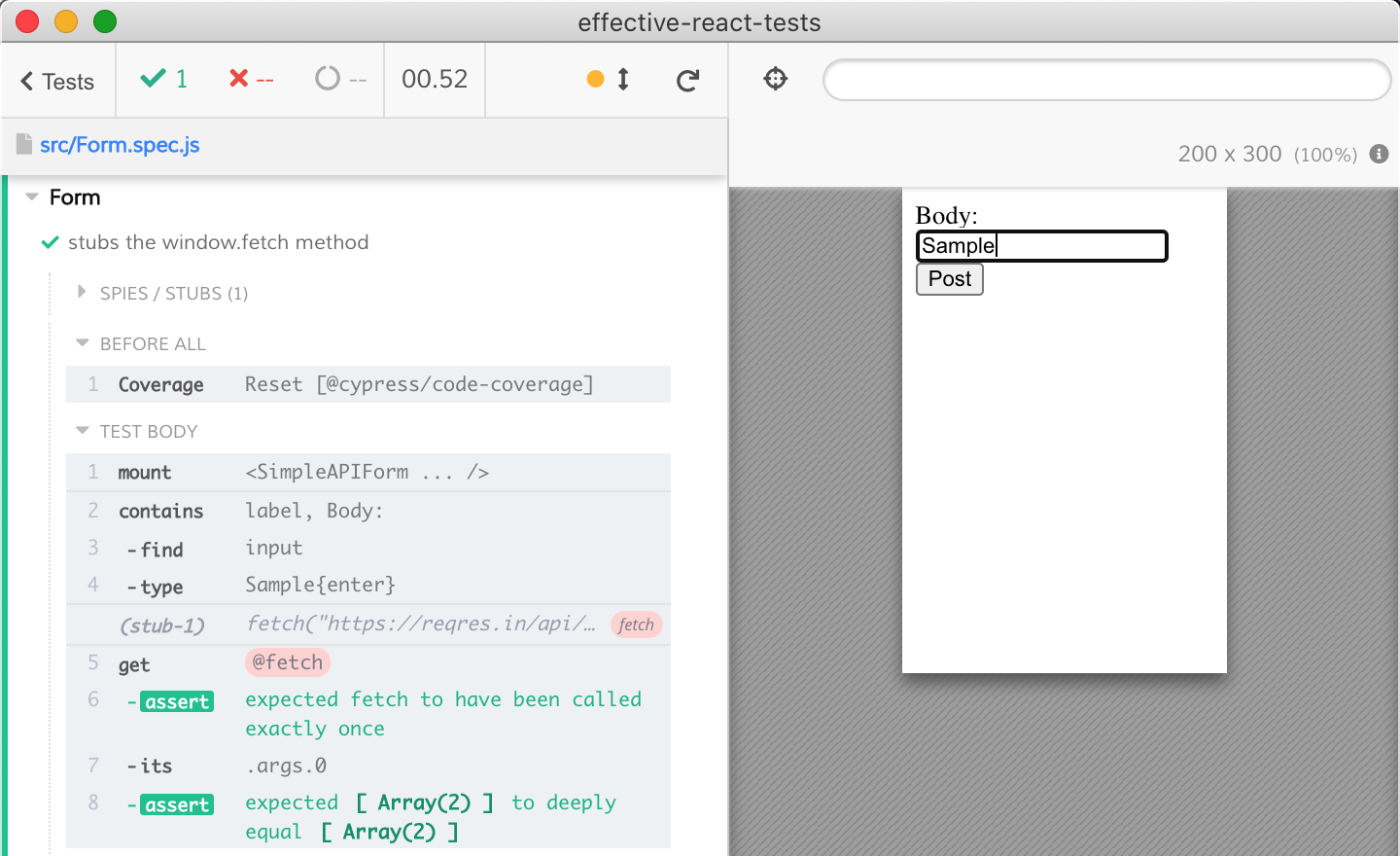 The test intercepts the network call outside the browser, thus we can fully confirm te Ajax call happens and we do not care if it was made using fetch protocol or XMLHttpRequest method.

Now let's add a bare-bones Redux data store to our application (and to our components), and see how our tests can work with it. The application's index.js file sets everything up, surrounding the top-level component with a Redux store.

The src/store.js creates the store

We can see the mounted component and even can exercise it ourselves - it is a fully running web application, after all.

The test exercises the component, just like a real user does

One benefit the component tests have over end-to-end tests is easy access to the objects passed as props. For example, when we mounted the Count component, we have passed the Redux store object. By controlling the component through its DOM, we have changed the internal store. From the test, we can assert the changes by directly inspecting the store object

By using Cypress time-traveling debugger, we can click on the cy.wrap command and see the component's DOM state at that moment, and see that our assertion has passed. The Redux store indeed contains count: -1. 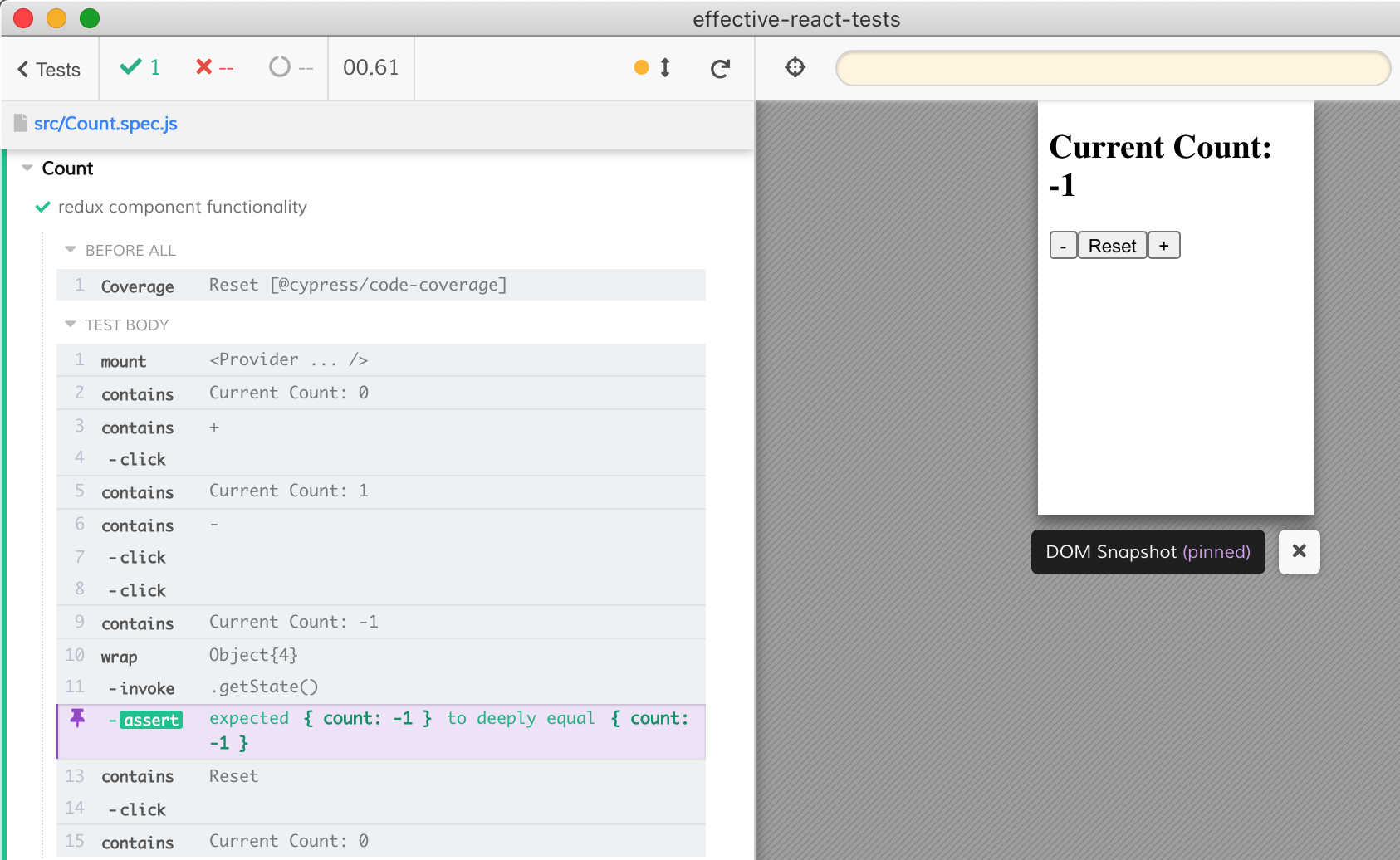 Let's say we want to write a custom React hook, like this one

We can follow the hooks example, and test this hook using mountHook function from cypress-react-unit-test library.

The above code mounts the hook, and exposes the result. 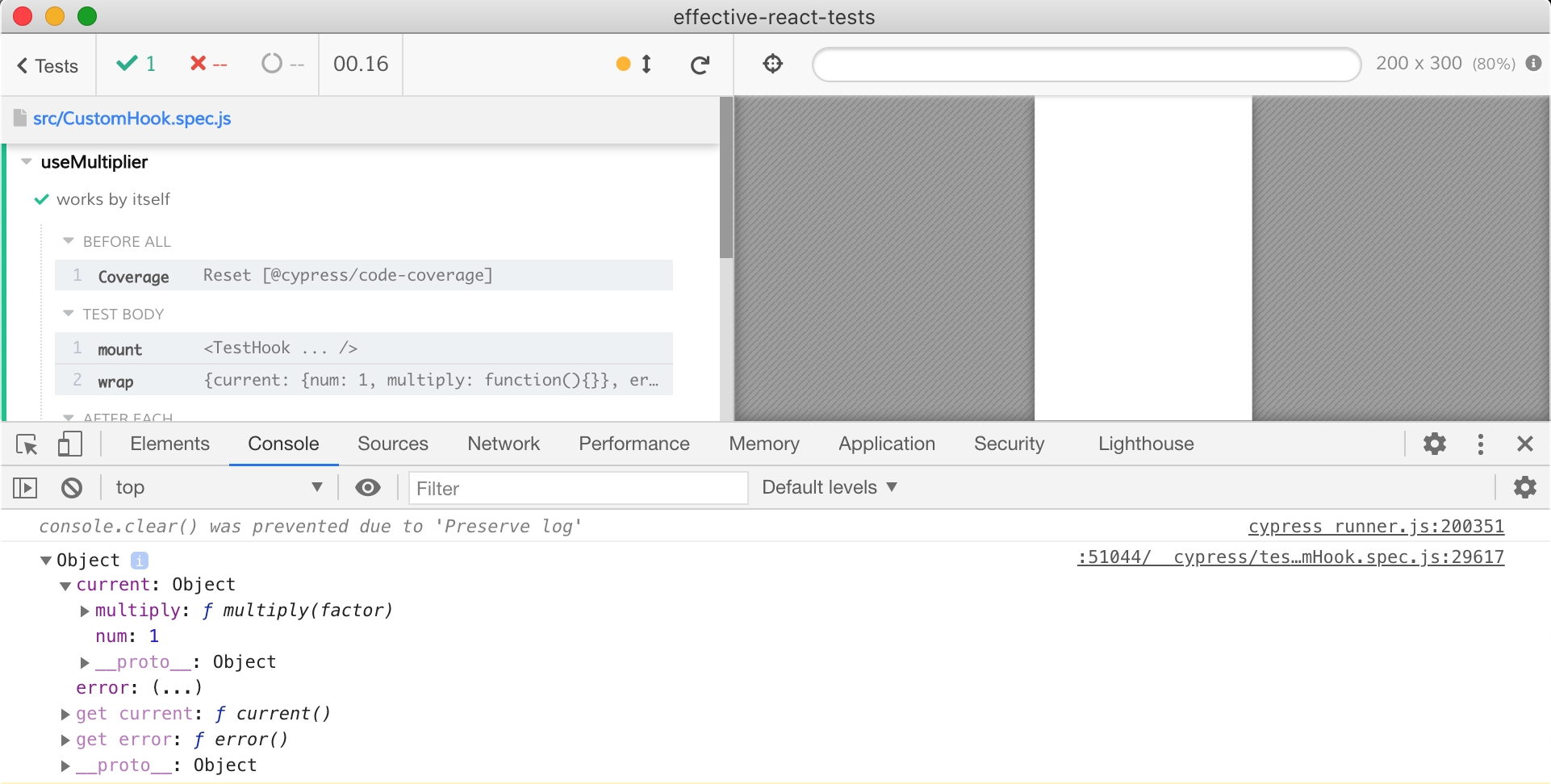 The above approach works - but it acts more like an isolated unit test. We would rather test the hook inside a test React component. We can create such component on the fly inside the test.

Find lots of examples in cypress-react-unit-test and read multiple blog posts. Testing React components inside a real browser should be efficient and even fun.