Note: I am using code from testing-workshop-cypress to demonstrate these cy.intercept gotchas.

The intercept was registered too late

Let's say the application is making GET /todos call to load its data. We might write a test like this to spy on this call:

It looks reasonable, it even shows the call in the Command Log - but does NOT pass.

You can see the XHR call in the command log - and it looks like it should work, right? But if you open the "Routes" section, notice that our intercept was never counted.

The application is making the call to load the data right on startup:

Thus, it makes the call right at the end of cy.visit command. By the time cy.intercept runs, the call is already in progress, and thus not intercepted. Cypress shows XHR calls by default in its Command Log, thus it has nothing to do with our intercept. I always thought NOT showing when cy.intercept happens in the Command Log was a user experience failure.

Make sure the network intercept is registered before the application makes the call.

In our case, we need to register the intercept before visiting the page. Once the page is loaded, the application fetches the todo items, and everything is working as expected.

You can overwrite Cypress commands and log a message to the Command Log. Unfortunately overwriting cy.intercept has a bug with aliases #9580, and thus we cannot always show when the intercept is registered. We can still do it case by case.

The above test clearly shows that the intercept is registered too late.

If you first wait on the intercept and then separately try to cy.get it to validate - well, the cy.get always resolves with null. 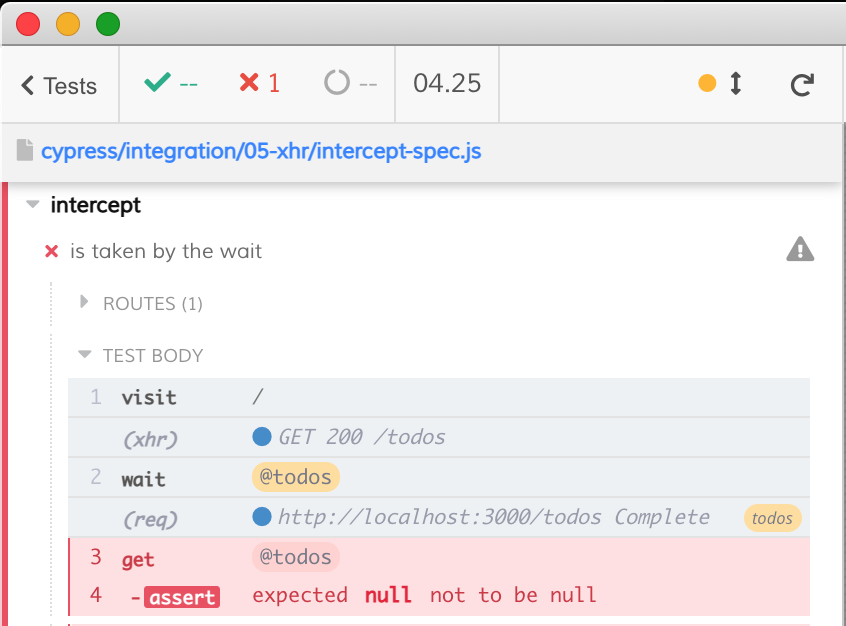 This is different behavior from cy.route where we could wait on the interception, and the get it separately. 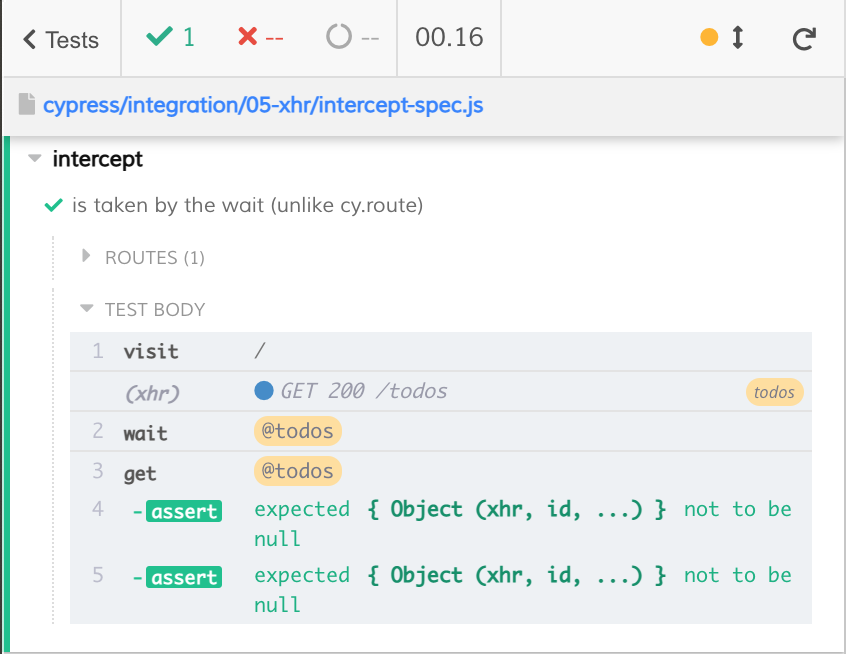 Honestly, I feel this is a bug #9306 that we should fix shortly. But for now you can validate the interception immediately using the value yielded by cy.wait 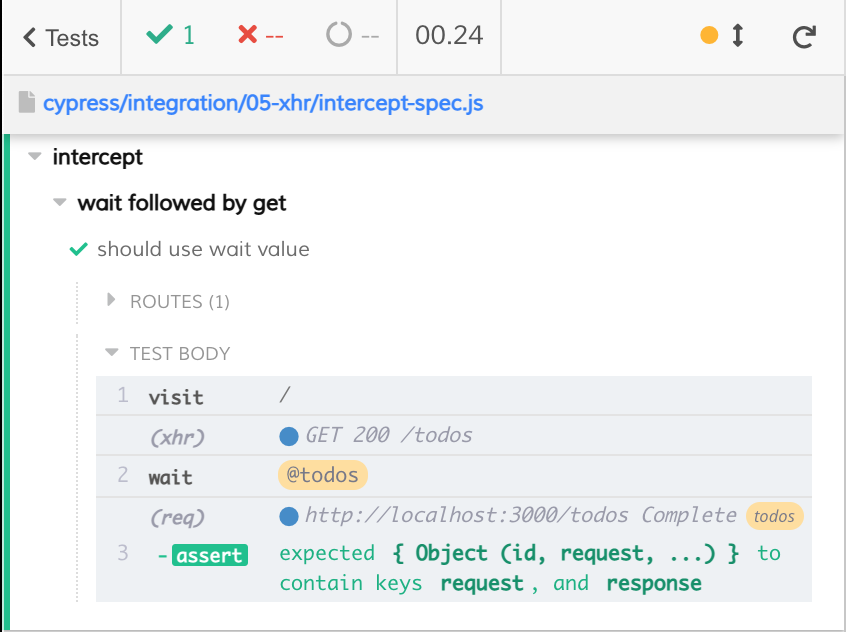 Let's inspect the interception object yielded by the cy.wait command.

We cannot validate the data sent by the server, because there is no data in the response. Instead the server tells the browser that the data loaded previously is still valid and has not been modified. Hmm, but we are not the browser - the cy.intercept runs in the proxy outside the browser. Thus we have nothing to test.

We can check the caching by using the following test: 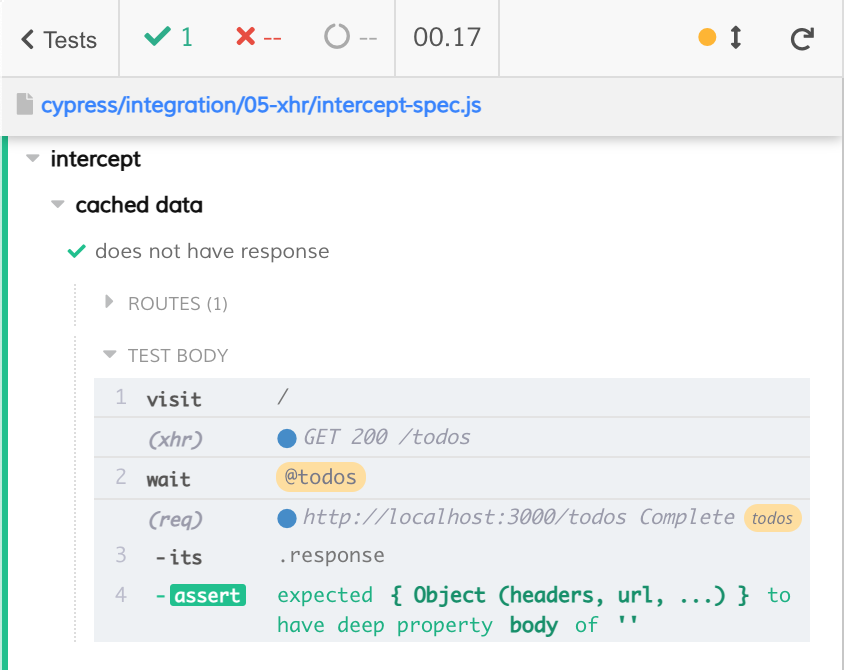 The server will always return the actual data if the server cannot determine what the client has already. The server determines the data "cache key" in this case by looking at the if-none-match request header sent by the web application.

We need to delete this header on the outgoing request. Let's do it using our cy.intercept. Now we can extend the test to validate the response.

The command cy.intercept can match requests using a substring, a minimatch, or a regular expression. By default, it intercepts requests matching any HTTP method. Thus when you define several intercepts, it is easy to get into the situation when multiple intercepts apply. In that case the first cy.wait(alias) "uses up" the intercept's response.

Consider the following test that adds a new todo.

We probably want to make sure the new todo sent to the server has the title "Write a test". Let's set up an intercept and validate the sent data.

If we inspect the value yielded by cy.wait('@post') it shows the object sent in the request 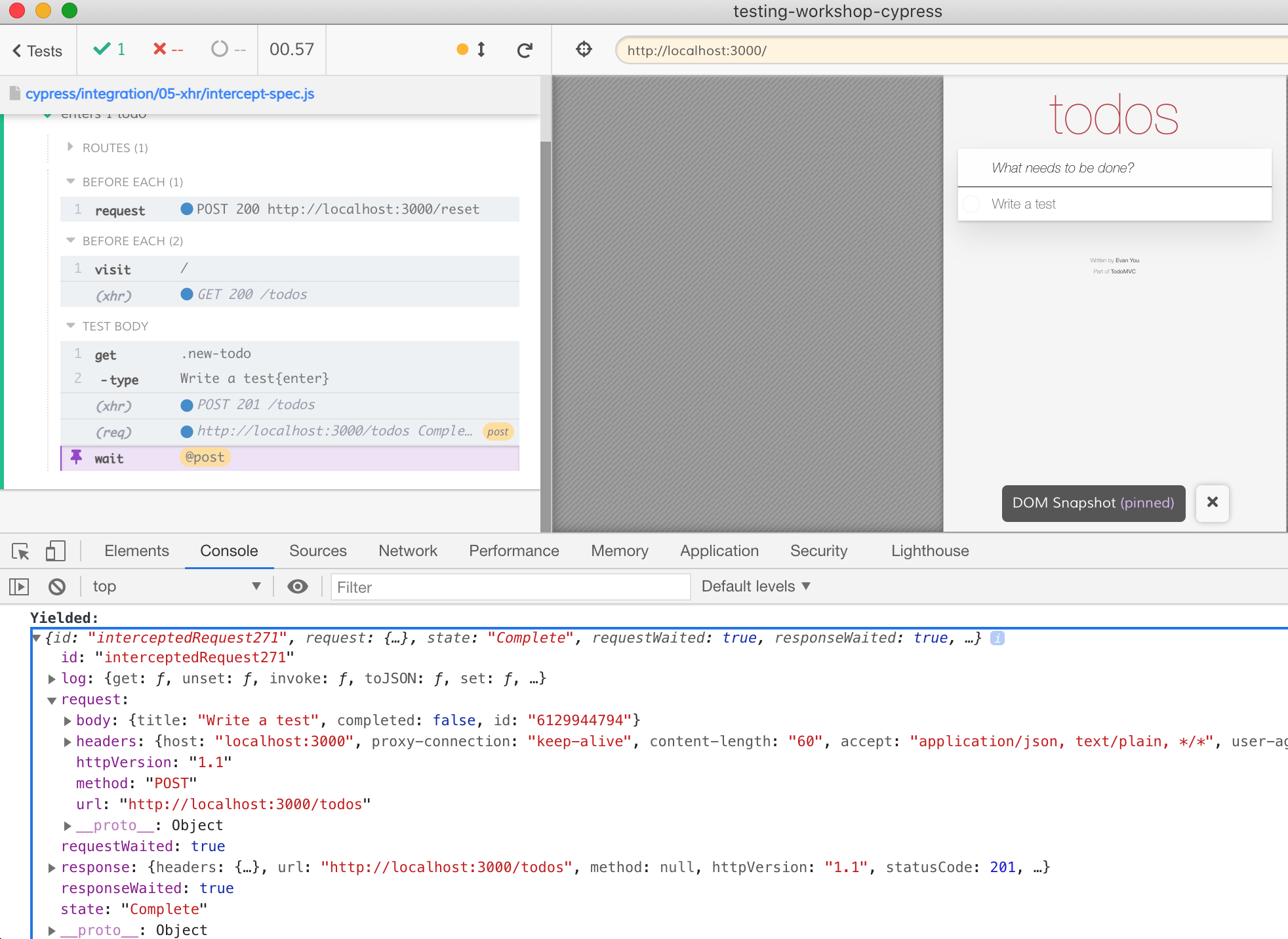 Great, let's validate the new item. Since we do not control the random ID generation (of course we can control it, see the Cypress testing workshop how), we can just validate the title and completed properties.

Great, everything works, what's the problem?

Imagine someone else comes along and changes the cy.visit and adds a wait for todo items to load - just like we did before. They do this to guarantee the application has loaded before adding new items.

So far so good. The test passes.

Notice a curious thing in the Command Log though - the XHR request to post the new item to the server has todos(2) badge. 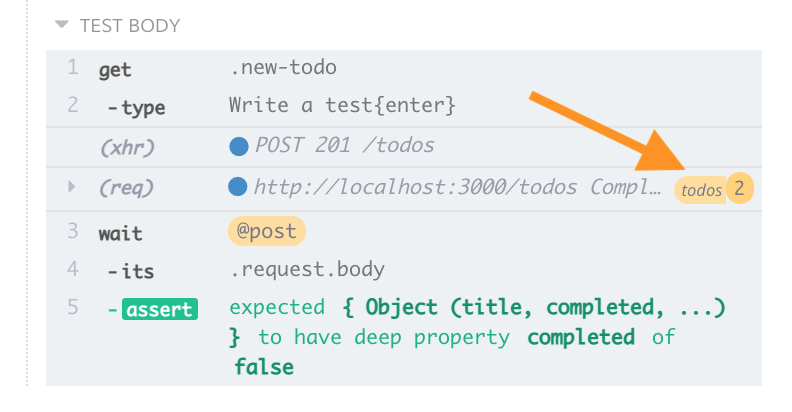 The POST /todos network call the application has made matches two intercepts, but the Command Log only prints the first intercept's alias.

In our test both intercepts only spied on the request. Now someone comes along and asks why do we need to reset the database before each test using resetDatabase utility method. It would be so simple to stub the initial GET /todos call and return an empty list of items. 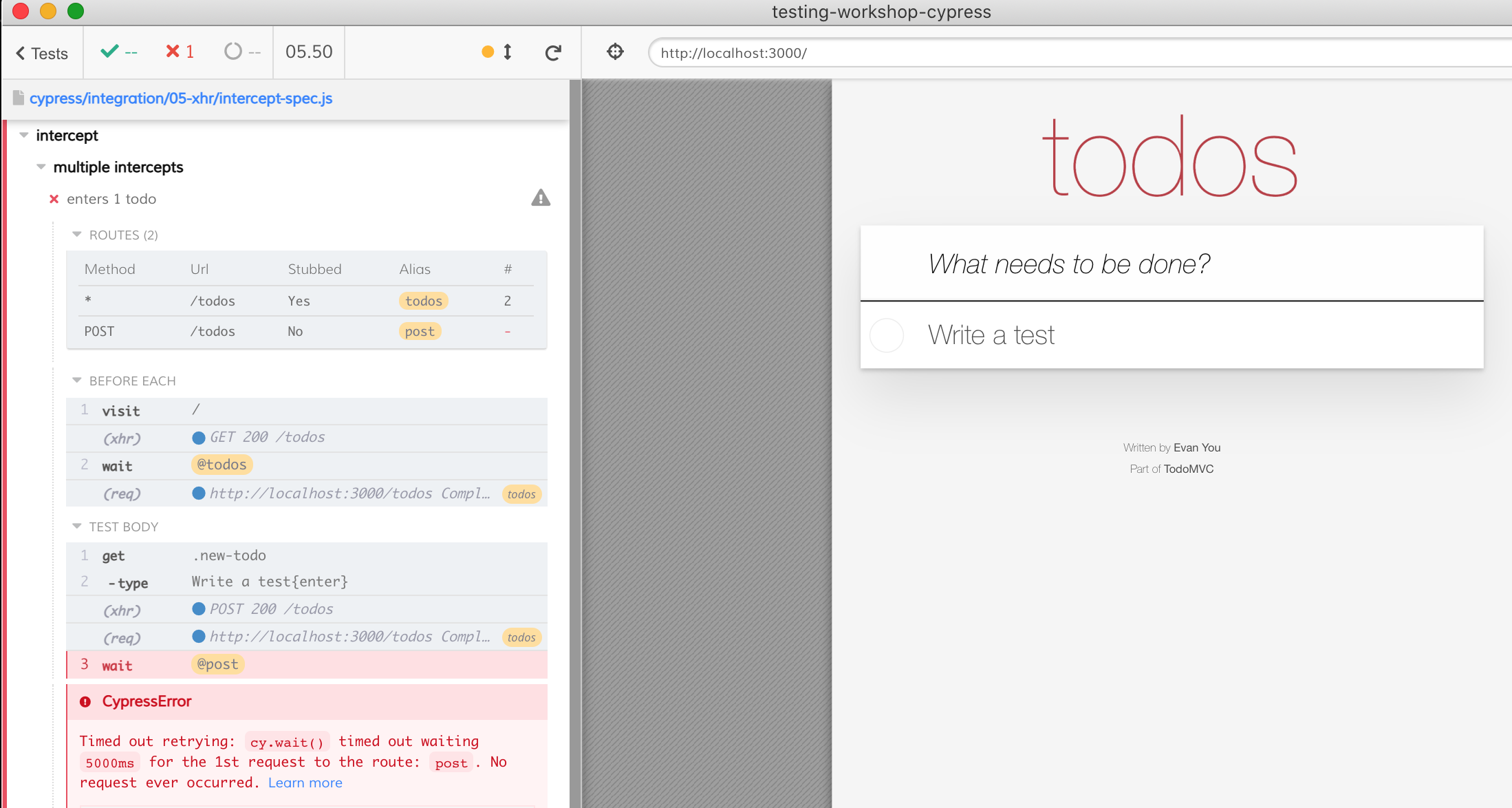 If there are multiple matching interceptors, the first intercept that stubs the request stops any further processing. Thus our POST /todos network request gets intercepted by overly broad first * /todos intercept.

Use specific intercepts and make sure the stubs are not "breaking" any listeners defined afterwards. Change the first intercept to only work with GET /todos call.

Update: I have opened issue #9588 to provide better labels to the intercepted requests.

Let's imagine the most common scenario - every test starts with zero items. We stab the GET /todos request and visit the site in a beforeEach hook.

Now you want to confirm the application displays the initial list of todos correctly. Hmm, you would like to stub the initial GET /todos call in the new test: 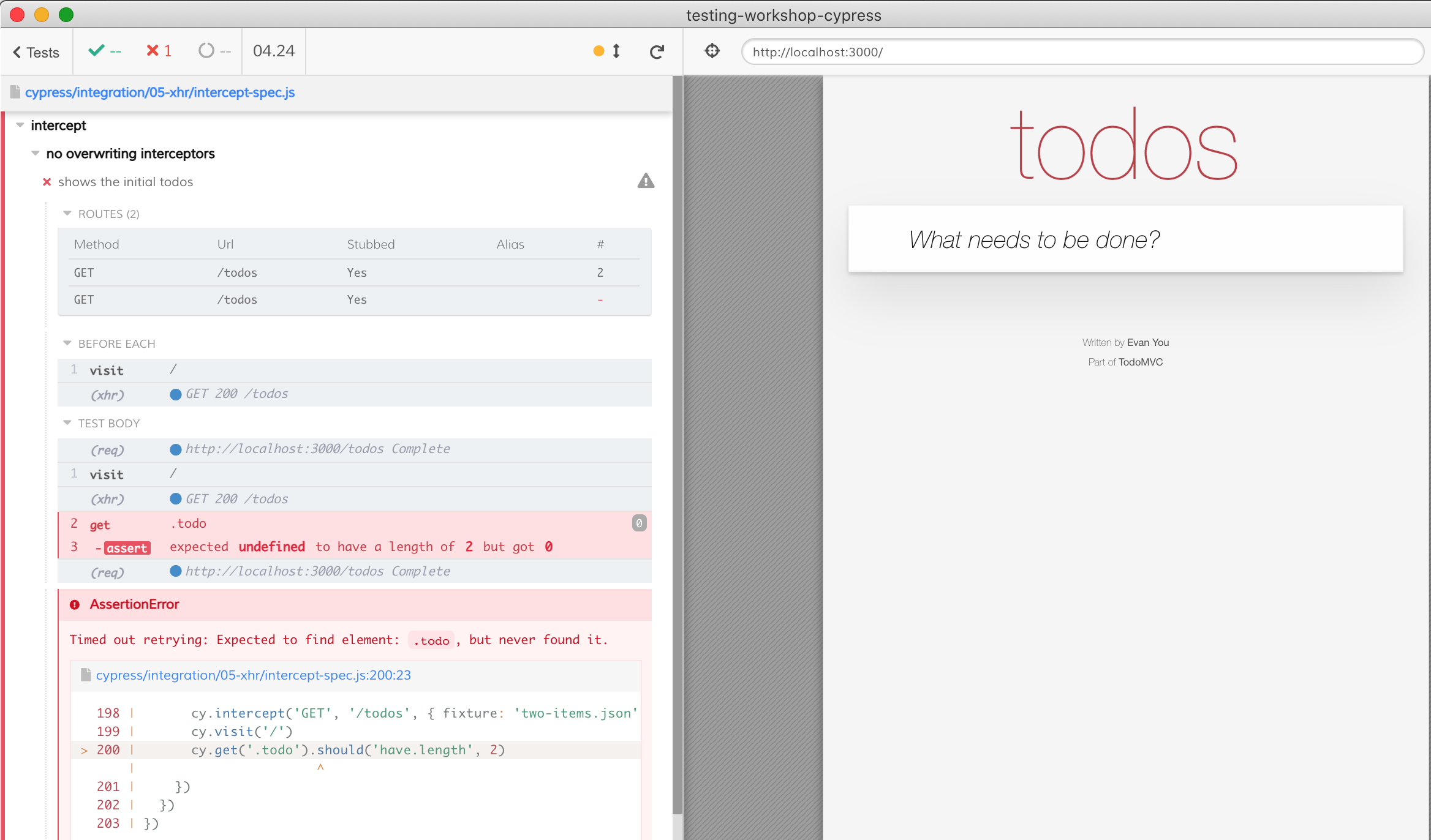 Unfortunately the test fails. The first intercept cy.intercept('GET', '/todos', []) still executes, our the second intercept never has a chance.

We have a tracker issue #9302 to solve this problem somehow. It is complex - changing an intercept from stub to spy, or from spy to stub is tricky.

Separate the suites of tests to avoid using the beforeEach hook that sets up the unwanted intercept.

Avoid Cypress commands inside the interceptor

You cannot use Cypress commands inside the interceptor callback, since it breaks the deterministic command chaining. The following test fails 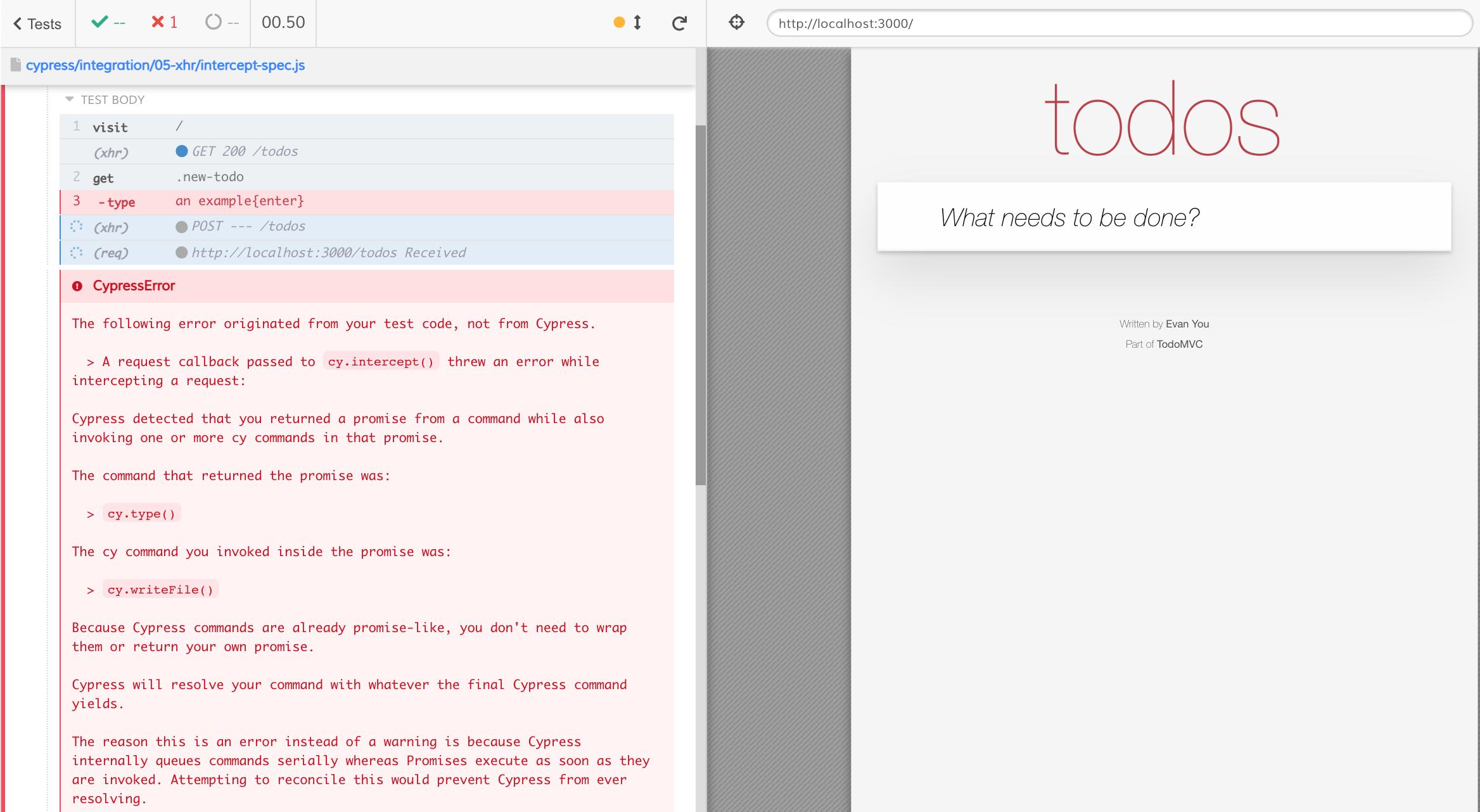 The interceptor is triggered by the application's code, while other Cypress commands are already running. Cypress has no idea how to chain the cy.writeFile command - should it be after the currently running command? Or later? This leads to non-deterministic and unpredictable tests. Thus this is disallowed.

Instead save the body of the request in a variable, wait for the network call to happen, and then write the data to a file.

Watch the video below for details

Imagine we stub the loading items from the server. Initially the server returns two items. Then the user adds another item (we stub the POST request too), and when the page reloads, we should receive three items. How would we return different responses for the same GET /todos call? At first we could try to overwrite the intercept

But of course this does not work - because as I have shown in the previous section, you cannot overwrite an intercept (yet). 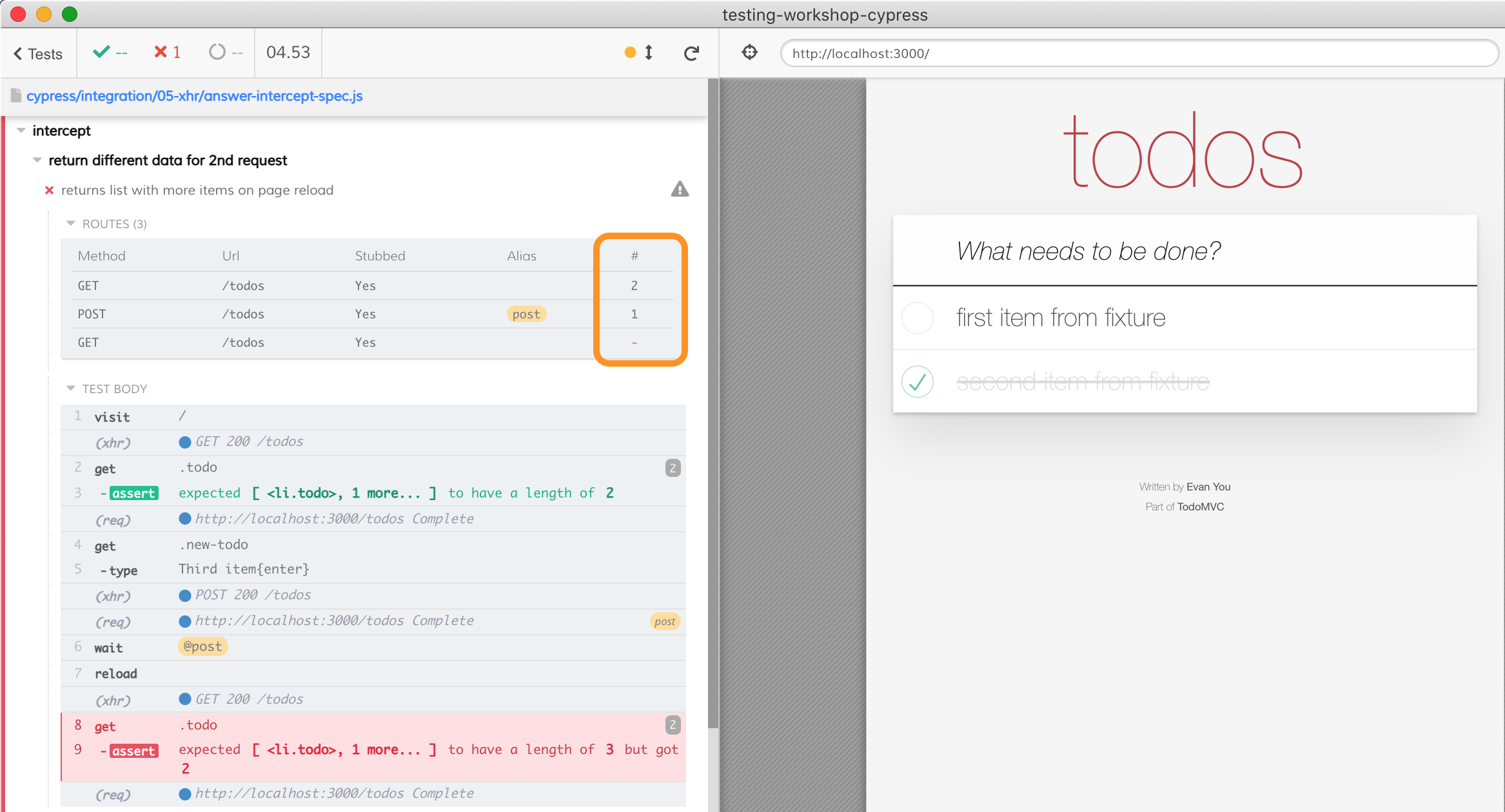 The first interceptor responds to both GET /todos calls. The cy.intercept('GET', '/todos', threeItems) intercept was never called, as I highlighted in the screenshot.

Use JavaScript code to return different responses from a single GET /todos intercept. For example, you can place all prepared responses into an array, and then use Array.prototype.shift to return and remove the first item. 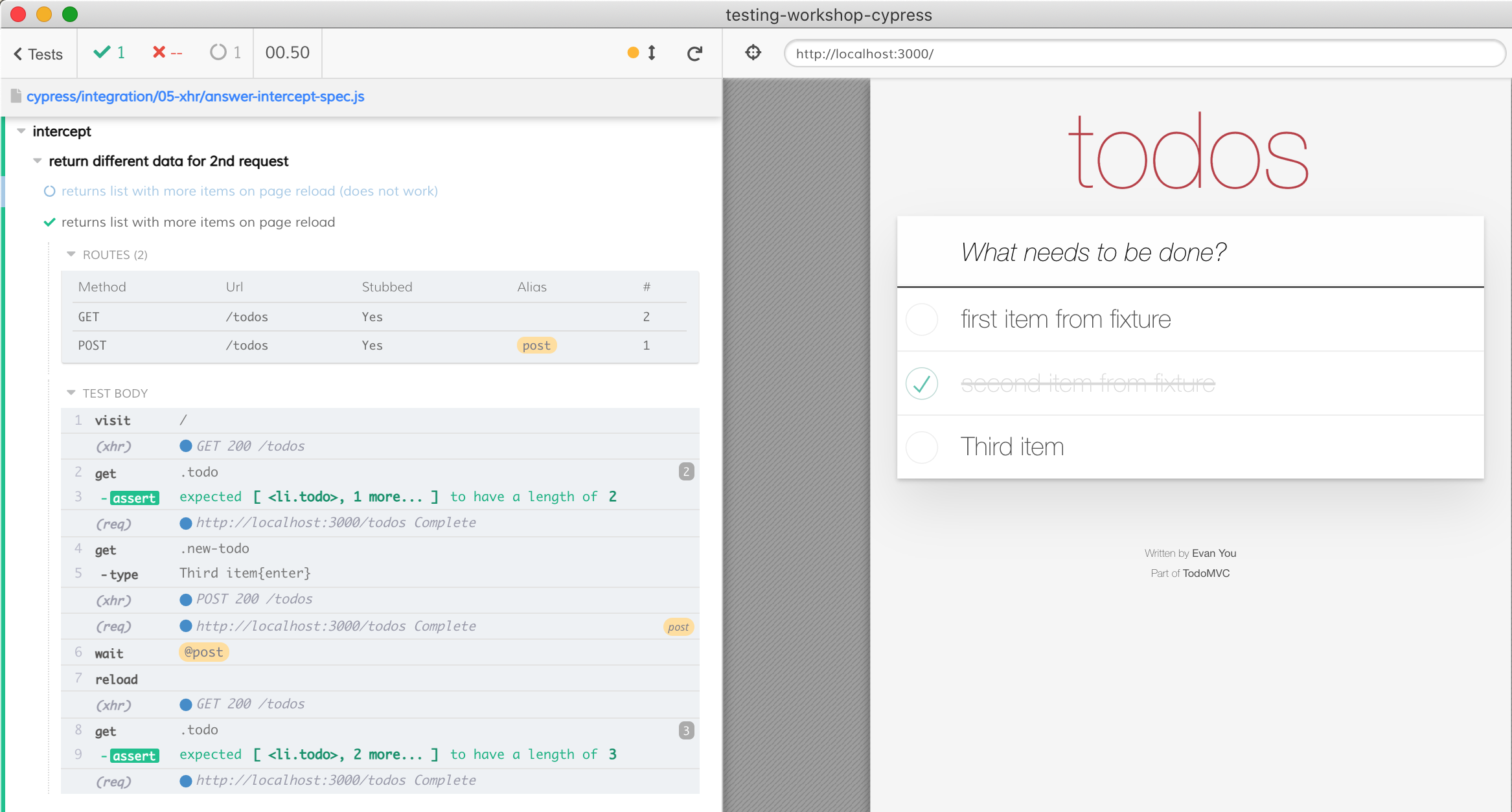 Let's get back to overwriting the interceptors again. We want to overwrite the GET /todos response from a particular test.

The last test "shows the initial todos" fails, because its intercept is never executed. See the previous section No overwriting interceptors for the details and a solution.

We cannot replace the intercept again, but we can extend the logic in setting the intercept to use JavaScript code to implement the overwrite. Let's create a new Cypress command cy.http that will stub the network call with a response, but that response will come from an object of intercepts. Any test that wants to return something else should just replace the value in that object.

Tip: I will store the object with intercepts in Cypress.config() object and will reset it before every test.

The main logic is inside the cy.intercept call

Notice the value is not hard-coded. Here is how we use cy.http from our tests

Notice we still have to call the cy.http before the cy.visit, thus cy.visit cannot be placed in the beforeEach hook. Still, overwriting is very convenient for tests that expect different responses, like adding an item.

Tip: add a log message to our cy.http command for better experience.

This is similar to overwriting interceptors. Imagine you want to stub a network call once, but then allow other calls to go through to the server. Just intercepting with a static response would not work, as that intercept would work forever.

Here is the test that does not work.

Notice how the new item appears in the UI, we also see it being sent to the server using POST /todos call. Yet, the intercept "todos" again returns the empty list of todos on page reload.

We want to intercept only once. We do not need to even write a custom command, a simple function would do:

Nice! And since the intercept continues spying on the requests, even if it does not stub them, we can get the last call and confirm other details.

Get number of times an intercept was matched

Sometimes you want to know / assert the number of times an intercept was matched. You can see this information in the "Routes" table in the Command Log, how can you confirm it from the test?

Note: for now, using cy.state('routes') is an implementation detail, and might change in the future, but you could do the following: 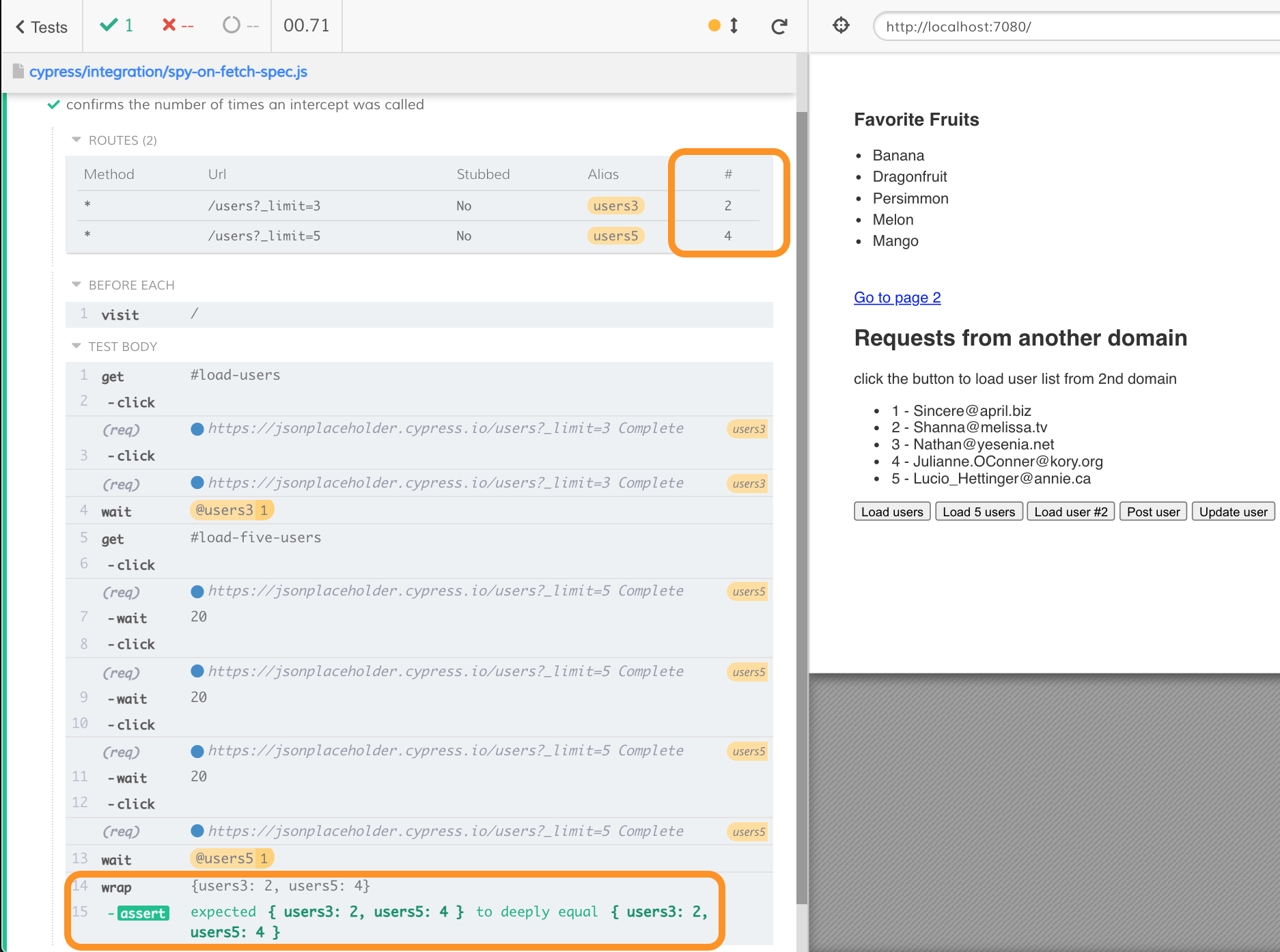 In case of GraphQL, all requests go through a single endpoint. Thus it is important for the intercept to inspect the request first, before deciding what to do. A convenient way to deal with such requests is to set the alias dynamically. For example, let's inspect all GET /users requests, and set an alias for the request that limits the number of users to 5:

The test runs, and an alias is created. The test can wait on that alias: