I have used a lot of tools for unit testing JavaScript, but could never find a good tool for running functional tests on my web pages. I have used PhantomJS / CasperJS / Selenium / Selenium with Protractor, yet always the tests were hard to setup, inconvenient to run, slow, flaky, and to be honest useless. A good test is only useful when it fails and allows to find the problem quickly. Functional tests often fail, yet it is hard to pin point why they failed, even if there is a legitimate software bug causing the exception.

Recently, I have watched a presentation by Brian Mann Testing, the way it should be that shows a new tool, currently in private beta for open source projects. The presentation shows how functional web testing could work if we designed a testing tool with the developer in mind. The tool is called Cypress; and after trying it on several of my own open source projects I must say: I have experienced the testing nirvana and so can you. The tool is almost magical in its simplicity and power.

I have a couple of projects using Cypress already, here are a few things learnt

The server running in the background is closed automatically by Travis once the tests finish. The functional tests themselves can be found in try-cy-spec.js and follow BDD format (Cypress uses Mocha). Assertions are made using Chai should syntax. Here is a typical test checking that a new TODO item has been added to the list

Running the tests provides a huge amount of additional information - each step is displayed in the list on the left, each step has before and after DOM snapshots that I can inspect, and each object (like the NodeList selected using .find('li')) expression) can be inspected in the browser's console by clicking on it. 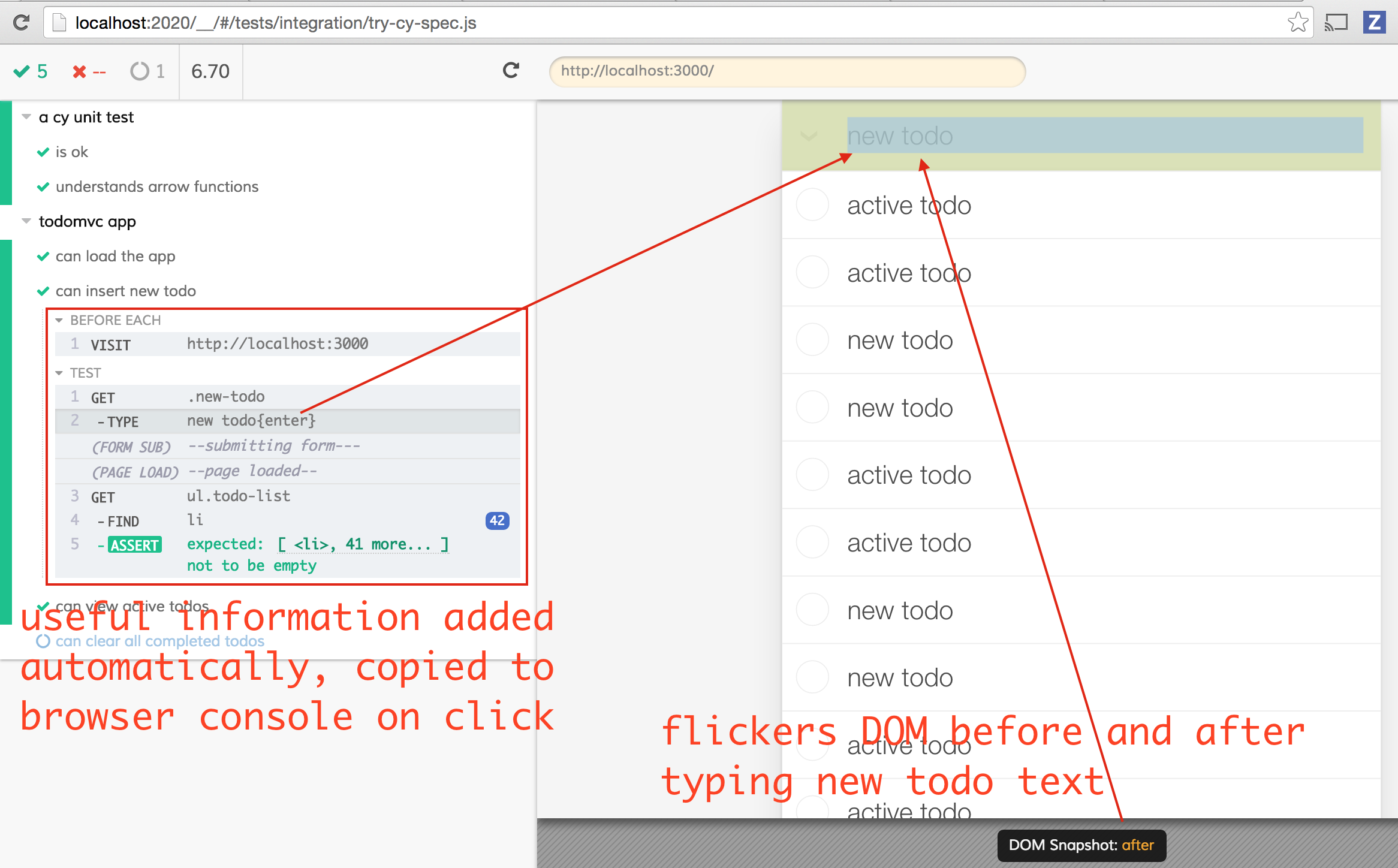 Interacting with the DOM around a failure is a pleasure and makes debugging failed tests a snap. For example if we expected the TODO DOM list to be empty after inserting a new item, the failure would have all the relevant information 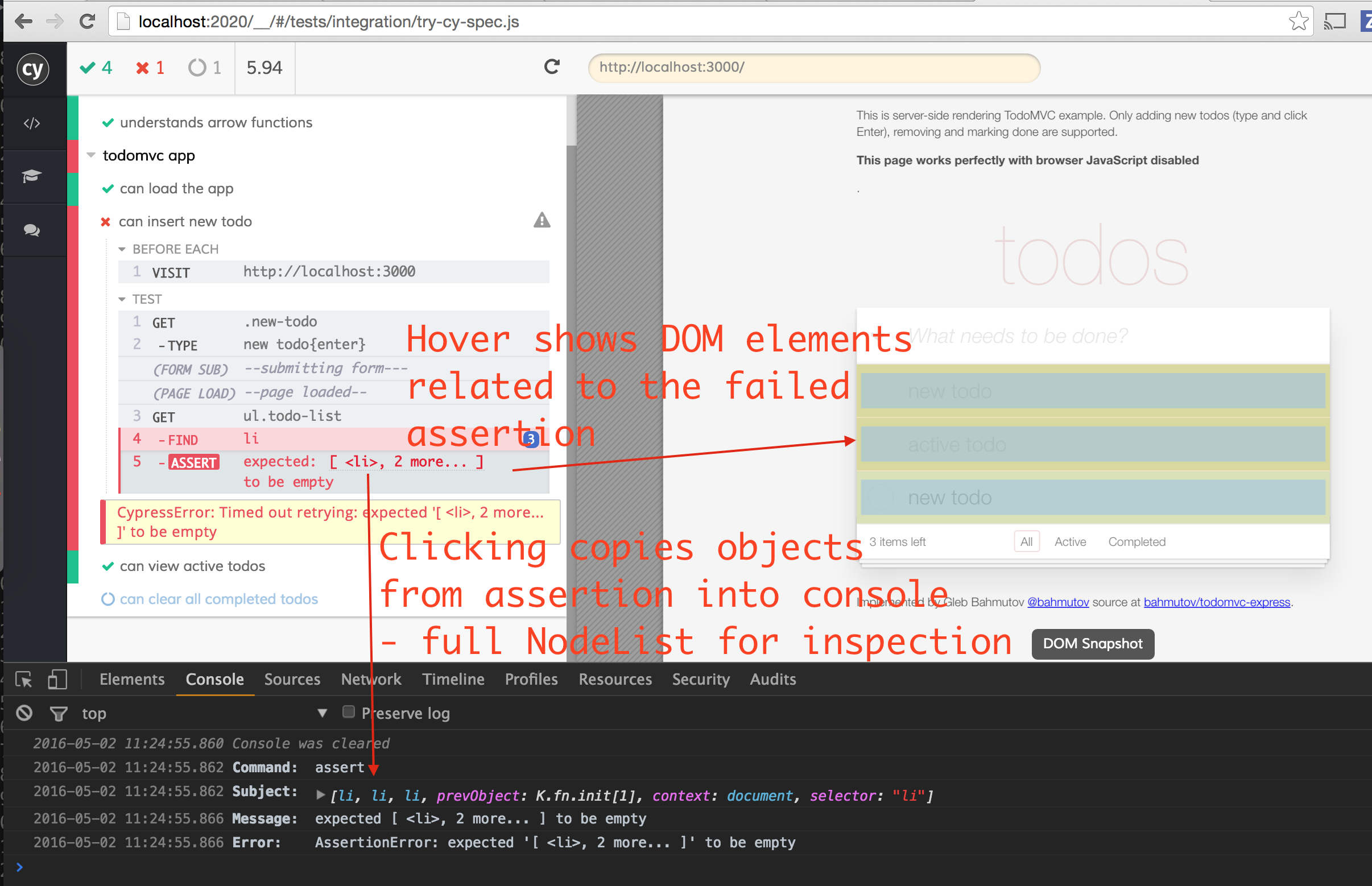 The tests can be opened in the multiple browsers by pointing at the same top URL (like http://localhost:2020/__/#/tests/integration/try-cy-spec.js in this case) and the tool reruns all tests in all browsers on source file changes.

My second example is a small JavaScript only library tiny-toast that displayes a simple text alert. I wanted to see if we can test a library that does NOT need a local server to run. Turns out Cypress can handle nicely opening a static file, even if it includes JavaScript resources that point to the parent folder. Here is my test page cypress/integration/page.html

Note that it includes tiny-toast.js from the repo's root dist folder. Yet Cypress loads everything without a trouble.

When testing JavaScript library that attaches itself to the window object, we need to grab the window object itself first. Since the test page runs inside an iframe isolated from the parent page, we need to use the provided Cypress API method. Here is how I check the object's API

To avoid boilerplate code, we can use Underscore property access (Underscore is bundled into Cypress tools together with jQuery, momentjs, and a few other popular utilities).

An interesting test that uses default DOM waiting in Cypress shows the text message, then closes it after 2 seconds. With Cypress we don't have to setup the browser delay at all - it will wait up to 10 seconds for the element to become invisible before failing. Thus our tests is simple

In the above code the command .contains('h3', 'test messaage') finds H3 tag with the given text contents, which should become visible after we execute tinyToast.show(...). Then the element should be removed from DOM after 2 seconds controlled by .hide(2000). 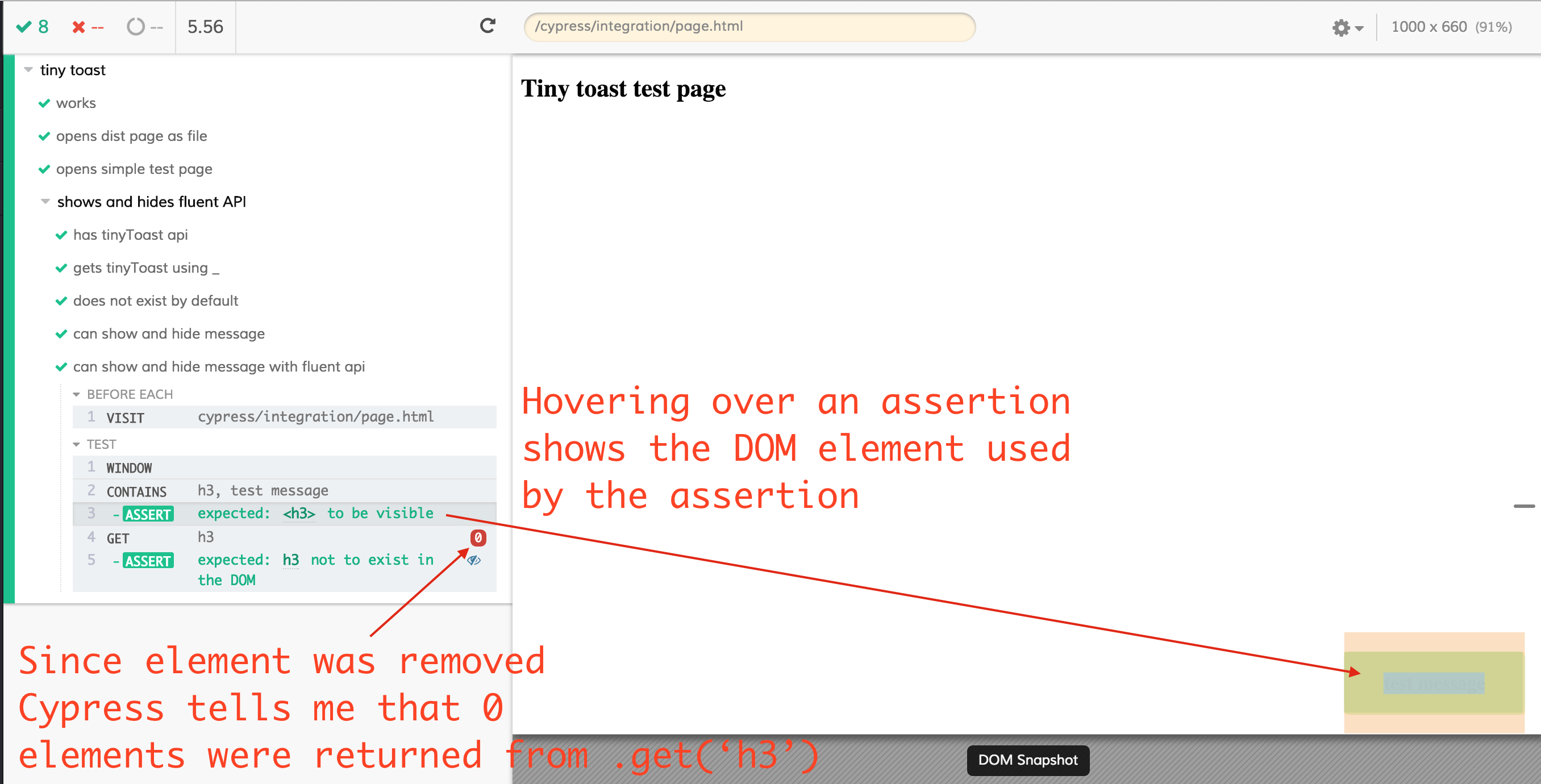 Hovering over each assertion brings the before / after DOM snapshots with the changed elements highlighted. Additional information is automatically displayed for .get() commands, like the number of found elements (zero in this case).

Working with Cypress has been a great pleasure. It shows that there is plenty of room for improvement in functional testing for web applications, one just needs to have a strong desire to identify and solve developer's pain points.