Note: you can find the source code for this blog post in the repository bahmutov/cypress-universal-test.

This JavaScript code is universal - it runs the same way in the browser and in Node. Can we confirm this using just the Cypress test runner? Sure. We can directly import this file from the spec and it runs.

The test runs, we can see the correct result printed in the browser's console.

This is far from optimal:

What I would like to do is to load and run src/sum.js on demand from the test itself, capture its console.log, console.warn and console.error output, and compare these output to the expected text.

Let's load the src/sum.js file without running it. Since Cypress uses Webpack under the hood by default, we can install Webpack raw-loader to return the source as text.

The test passes, and the code is evaluated while running the test

By default, raw-loader returns the loaded source file as ES6 module, thus we have to use sum.default. We can turn the ES6 wrapper off by passing line option to the loader using raw-loader?esModule=false.

The evaluated code printed the result to console.log. Let's buffer that output to assert its value.

The test runs and shows every intercepted console.log call from the evaluated src/sum.js

Universal code should produce the same result when running in the browser as in Node. Let's run the same src/sum.js in Node using cy.task.

💡 Node require caches the module. Thus if you want to fully run the code again, you need to remove it from the module cache. Use require-and-forget to do this.

Once the test runs, click on the task in the Command Log to see the yielded text.

💡 You can further isolate the plugins file from the Node code to run by running it inside a child process and then comparing the output, the exit code, etc. You can use execa-wrap to do this.

Now that we run the same code in the browser and in Node, we can remove the expected text and just compare the results from the two executions.

The test runs and compares the outputs - they are equal.

We only had a single src/sum.js file to run. What if we have a dynamic number of source files we want to run in the browser and in Node, comparing their outputs one by one? Let's add two more files to the src folder.

We need to create tests dynamically - every file in the src folder should get its own it function. To look through the src folder on disk, we can use the plugins file - since the plugins code executes in Node at the project's load. To find files I will use globby

We can find all src/*.js files and then pass the filenames to the spec running in the browser by saving them in the env object.

The environment object is available outside of individual tests through Cypress.env command. We can create a test by calling it for every source name (array .forEach is a synchronous method).

For now the above suite of tests just has skipped tests - but it shows that our plugins to spec file coordination is working.

The tests pass, and you can see the matching output from the browser and from Node 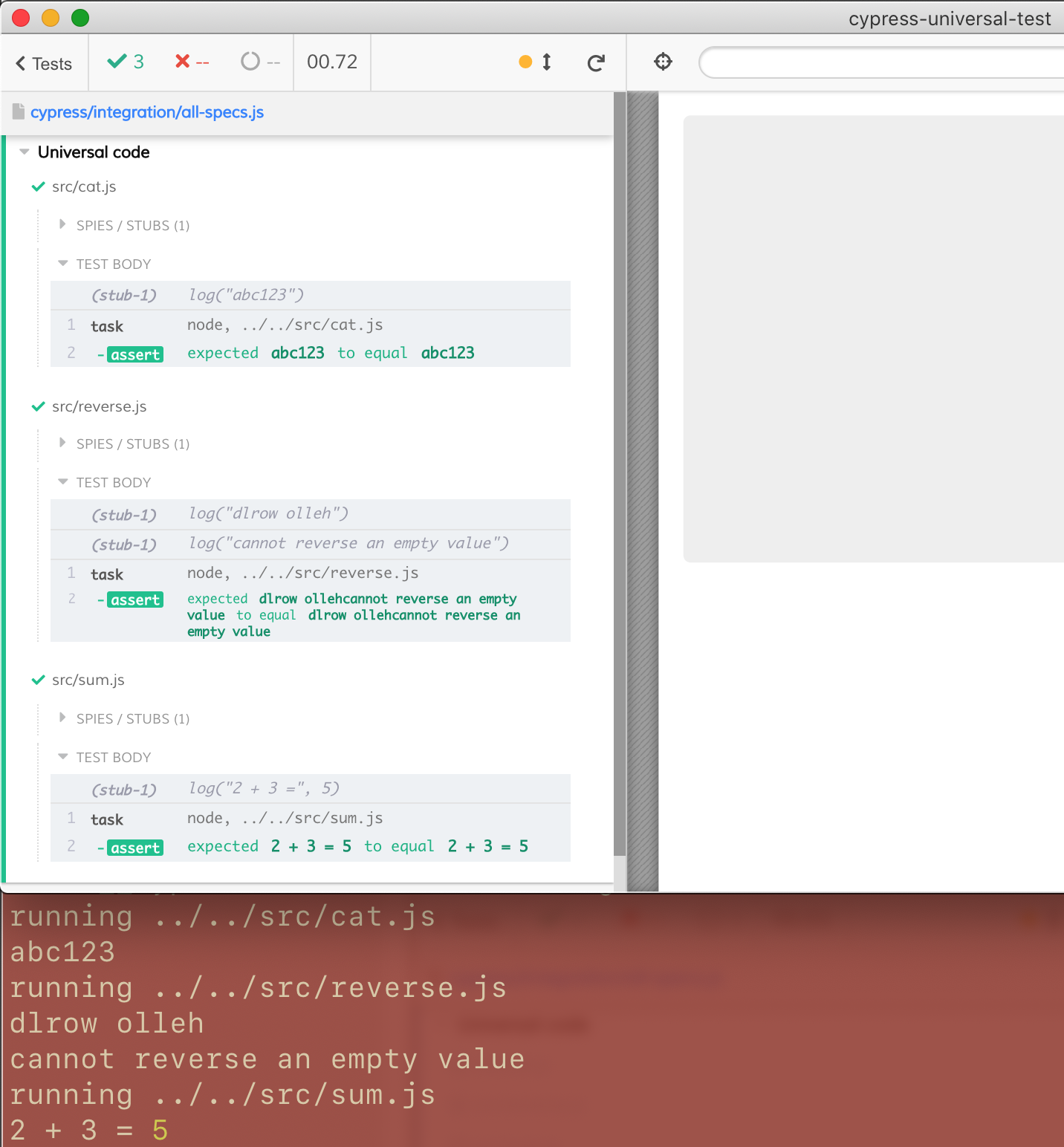