What is the minimum version of Node your NPM module requires? You might think it is Node 8 or Node 10 or even Node 6. But in reality you don't know - because the direct or transient NPM dependencies your project uses might require a different higher version, without even declaring it explicitly in the engines field of their package.json files.

Note: you can find the source code at bahmutov/support-node-v6

Let's start a new NPM application that uses chalk and execa to print the list of files. We want to use the latest versions of all the tools, so we are working on Node v12

Here is our application file index.js

The app runs and the colors show up (on Node v12) 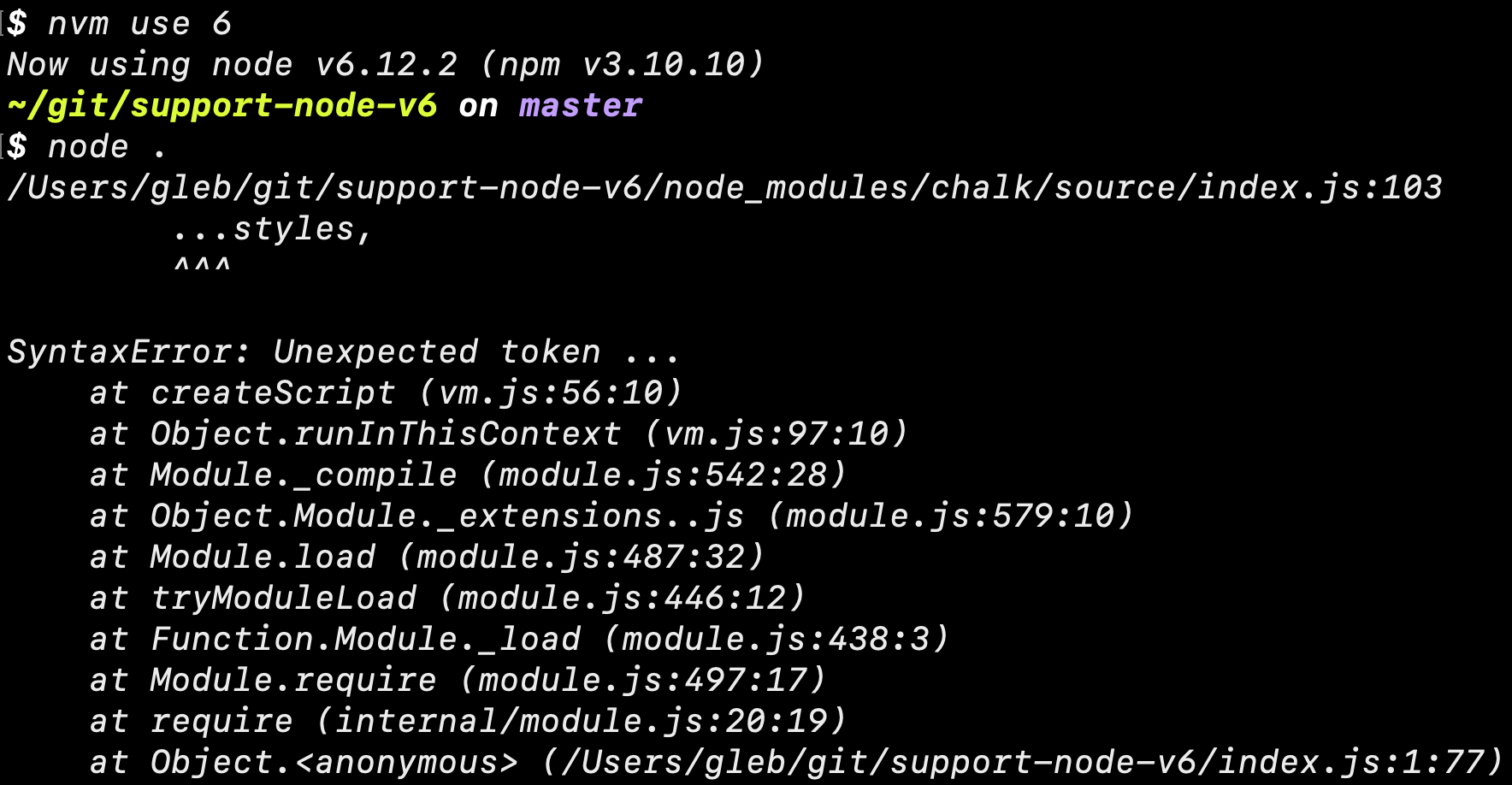 Because chalk uses spread operator, it does not run on Node v6 - and you would need to downgrade to [email protected]. But then the same happens with execa - it also uses the spread operator! 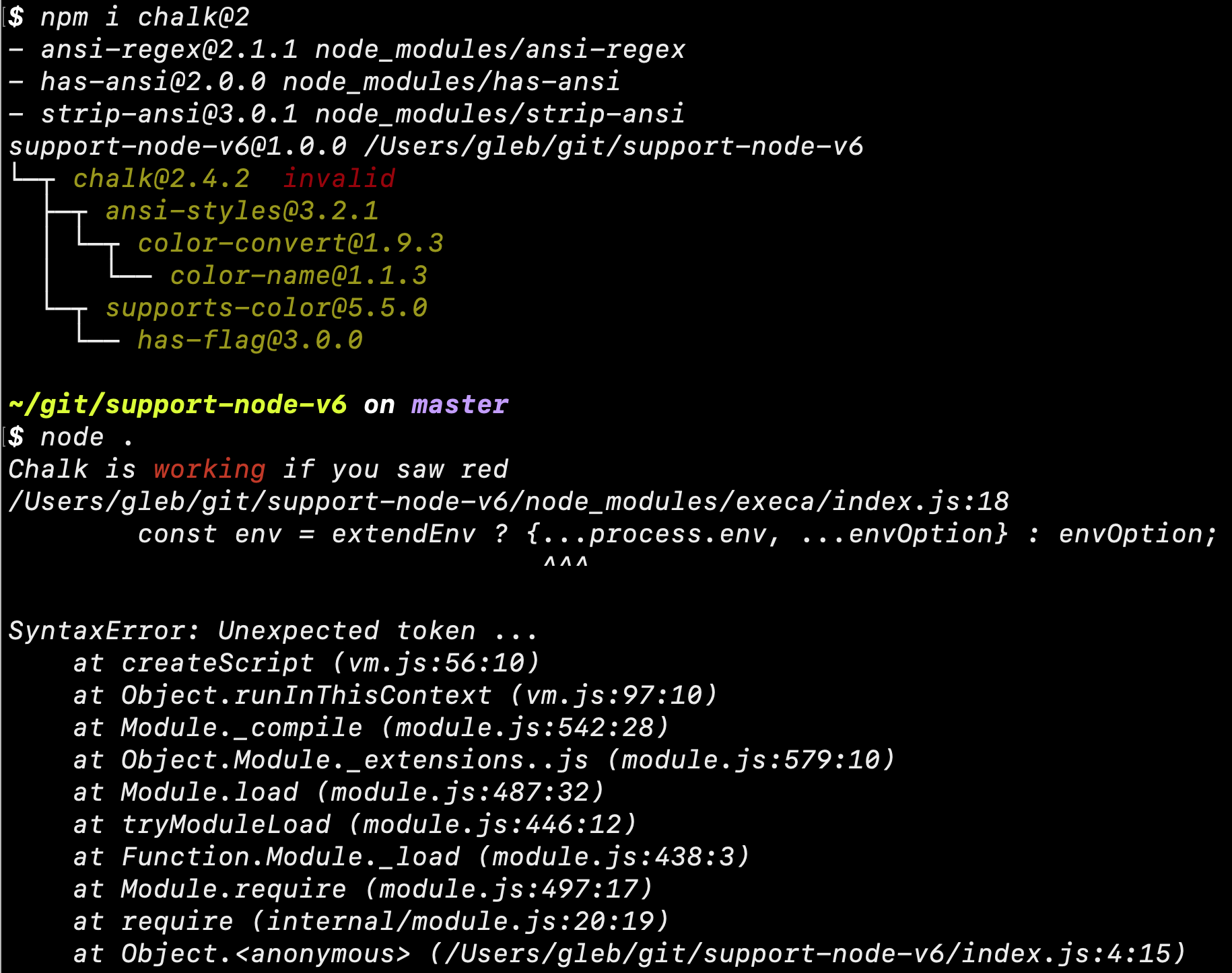 You would need to downgrade execa all the way to v1 to get the syntax compatible with Node v6. In the process you just lost soooo many features and fixes from execa and chalk, it is almost sad. 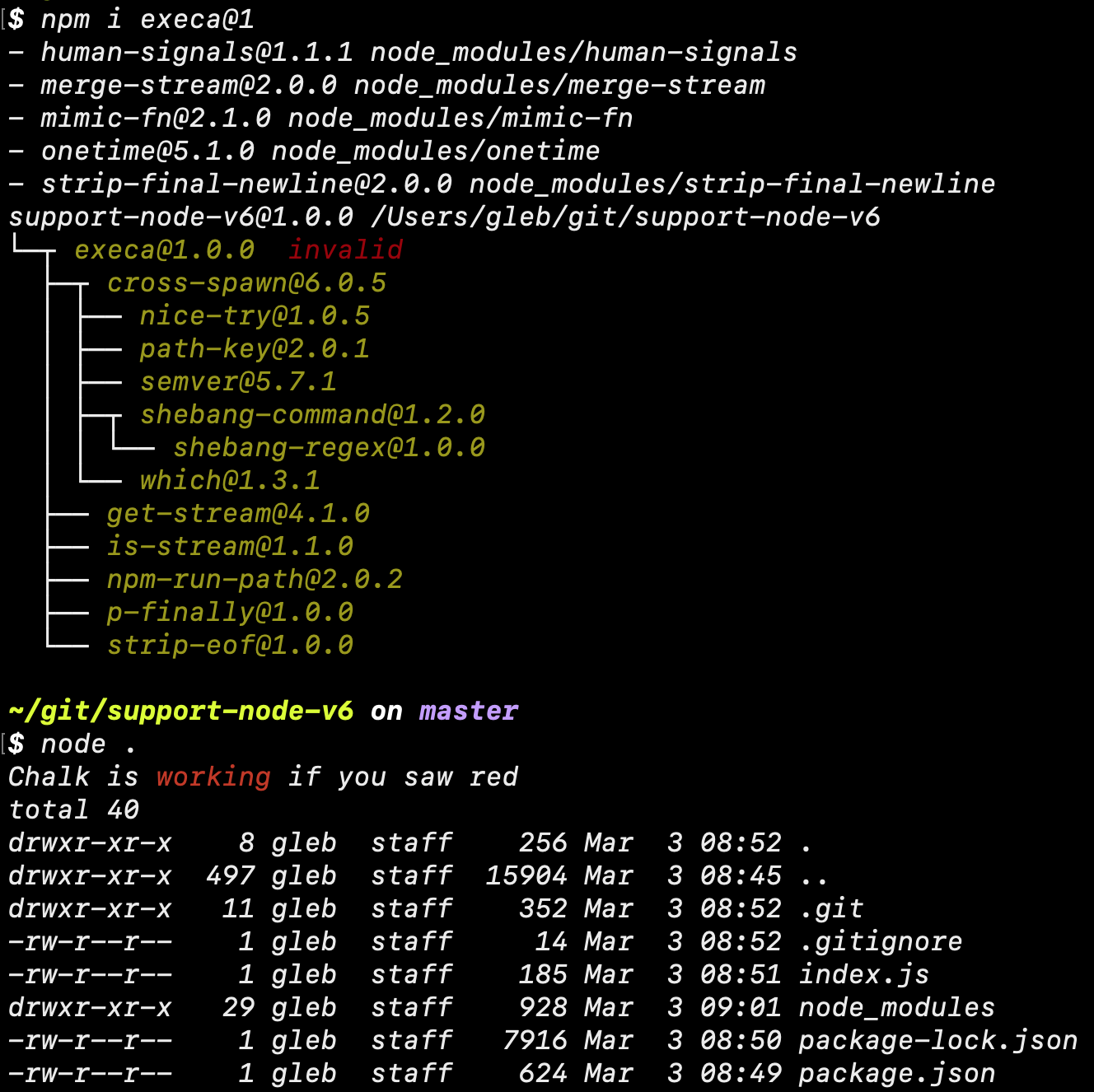 Let's switch tactics. Instead of searching for an old version of chalk and execa, let's install the latest versions - and let's bundle them into a single JavaScript file. Typically, bundling is done for browsers, but we will use @zeit/ncc to bundle for Node.

We can use ncc to produce a single JavaScript file from index.js entry using npm run build script

The bundle we produced does not run on Node 6 yet. 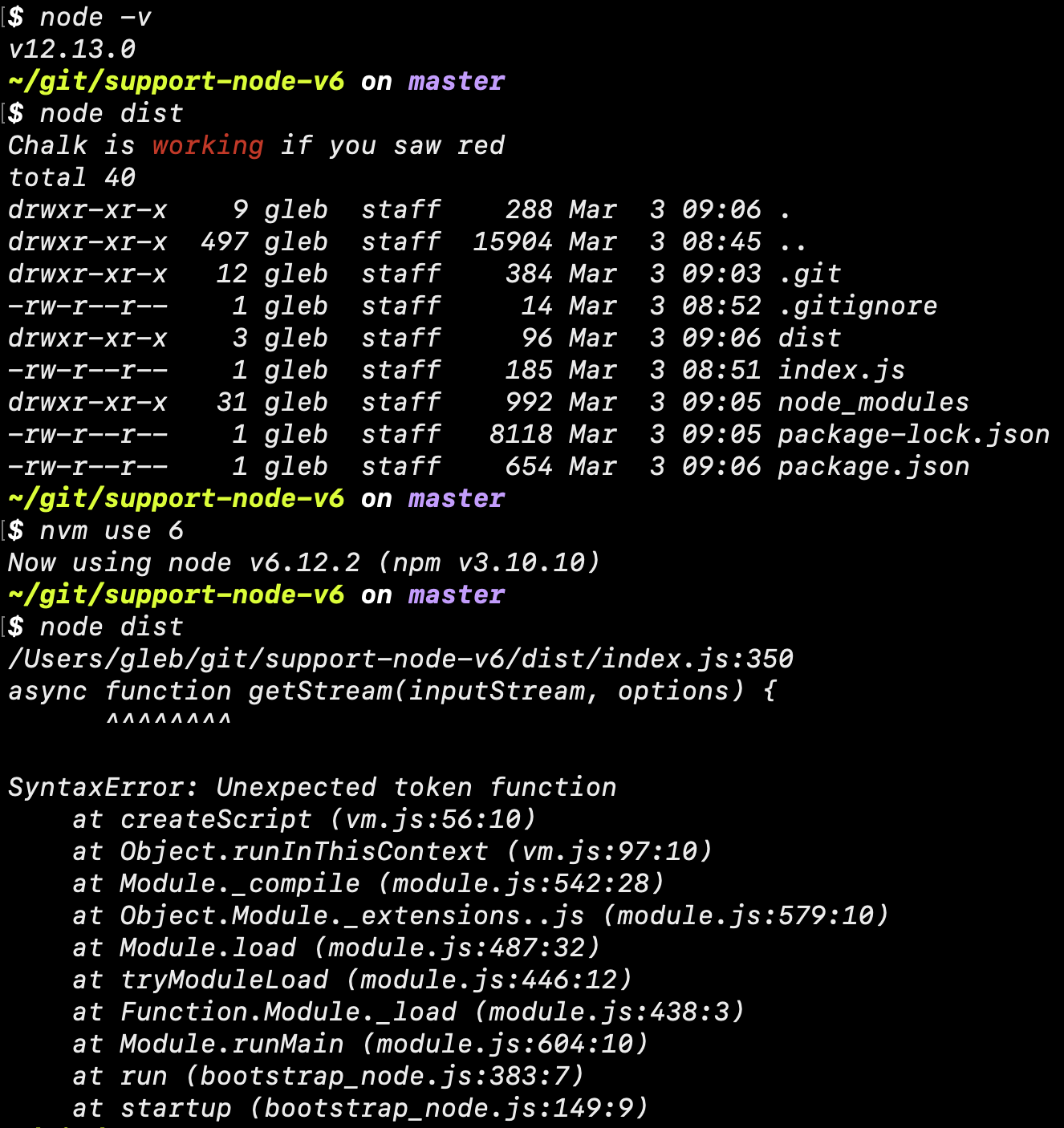 But the bundle has all dependencies included. We can remove node_modules folder and run it to prove this.

Now we can transpile this single file to make it work on (almost) any Node version. 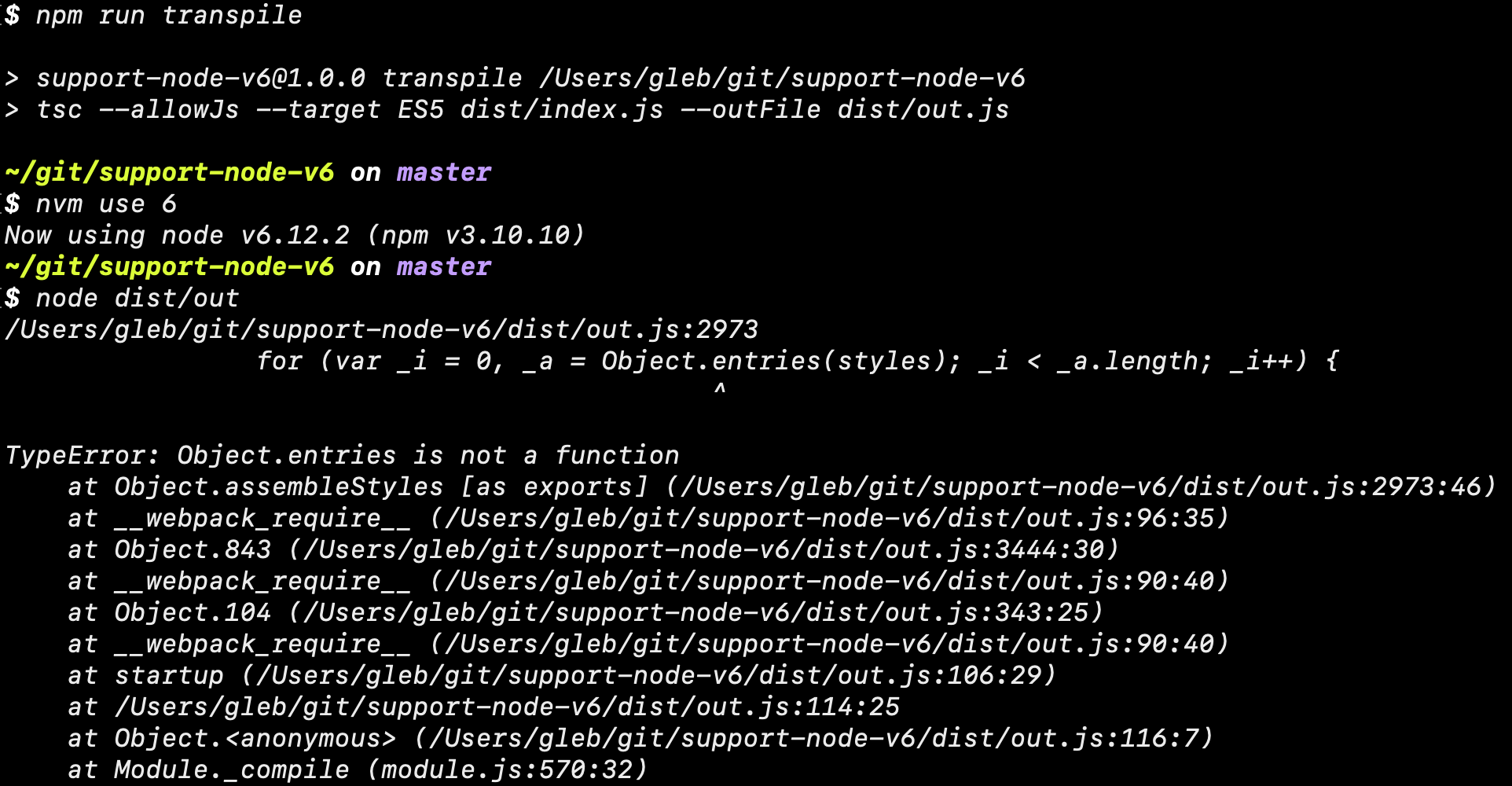 The bundle is transpiled - the spread operators in chalk and execa have been replaced, but the bundle still has Object.entries method that Node v6 does not understand. We can polyfill this method though.

Then require the polyfill from index.js file 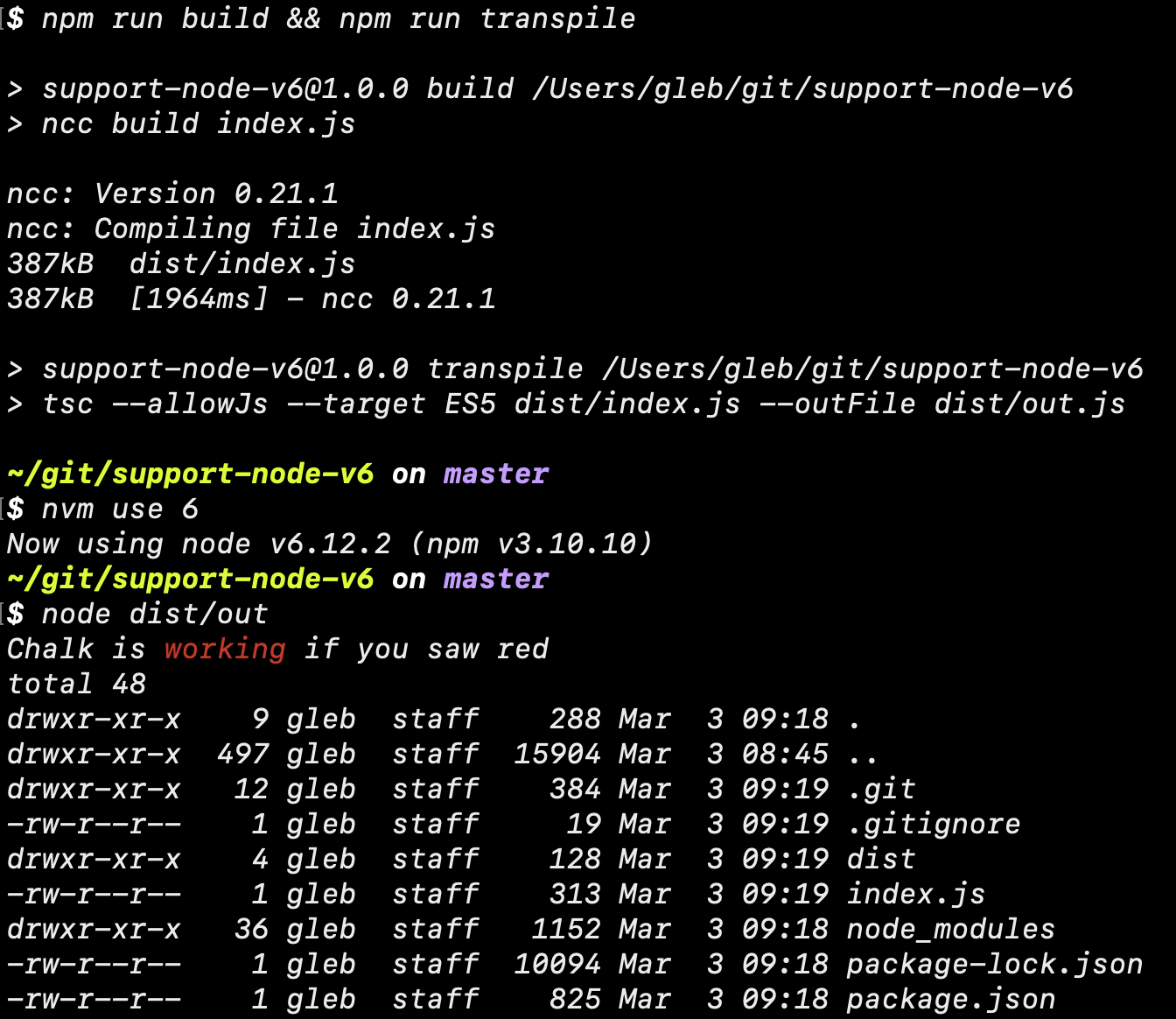 Nice, the latest dependencies do work on Node v6!

Since we only plan to distribute a single bundle, we can generate the intermediate bundle in the build folder, and run the transpile step post-build.

The zipped archive has size 114 kB, which looks like a lot. But remember, that anyone installing this NPM app should only download this single file, which should be as fast as downloading multiple production dependencies. But we still list execa and chalk as production dependencies, thus our users will get two copies of them - the second one coming from the dist/index.js bundle.

Thus my advice is to move all production dependencies into devDependencies - they will be included in the bundle as needed and skip using bundledDependencies.

Let's make sure the bundled dependencies work. I have created a new NPM package in a different folder and will install and run the above project using Node v6. 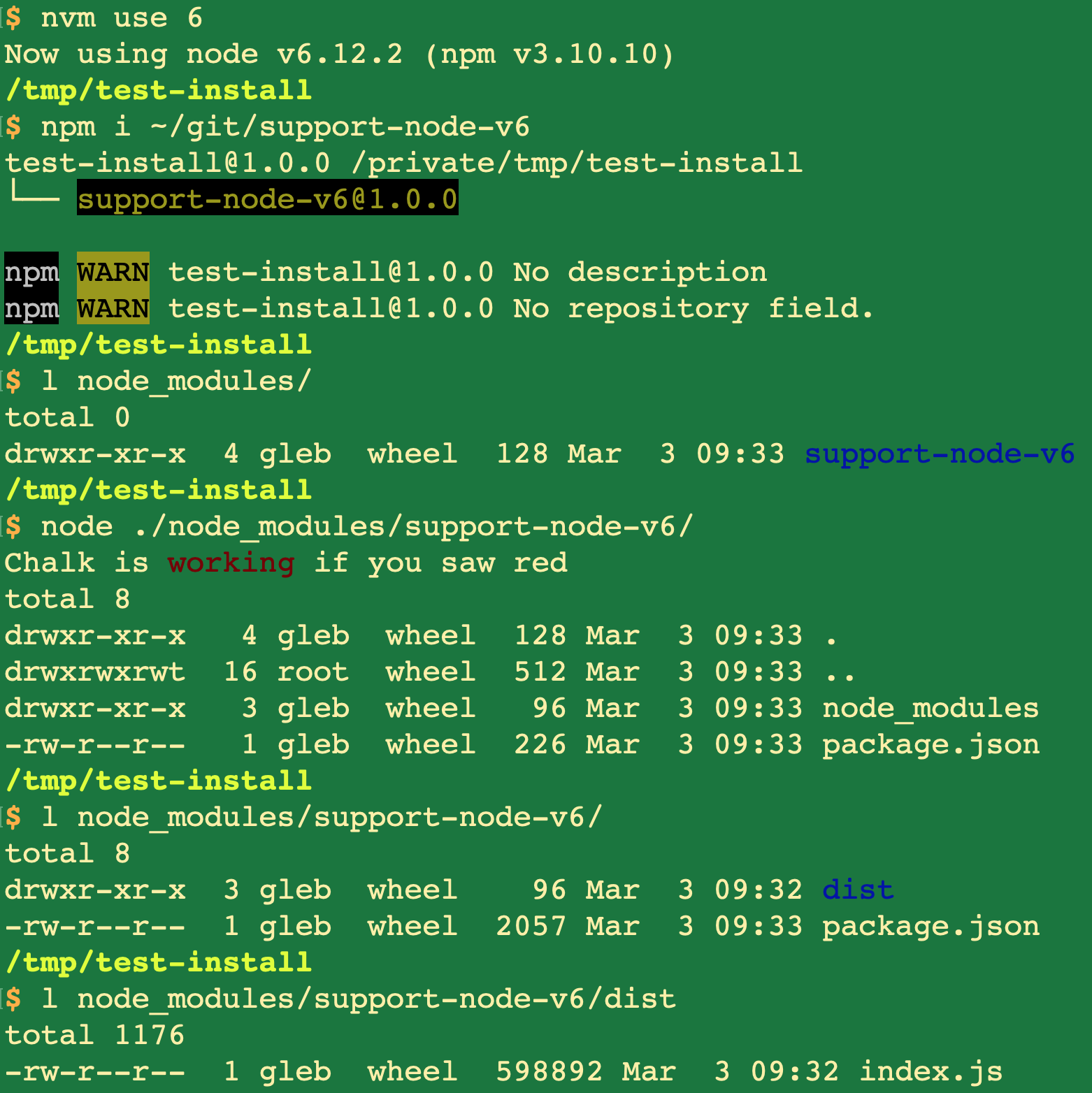 While @zeit/ncc and typescript can both generate source maps, I could not find a way to connect the two to get the source maps to link an error back to the original source file. If you know how to do this, open a pull request in bahmutov/support-node-v6, please.

Some ES6+ syntax and features cannot be transpiled down, for example if your project requires WeakMaps or Proxies - you are out of luck.

Instead of @zeit/ncc we can use Parcel bundler to bundle code like this: