ReactBoston was in town this weekend. While I have not attended, I saw lots of tweets about it. One of the tweets from @swyx caught my eye: 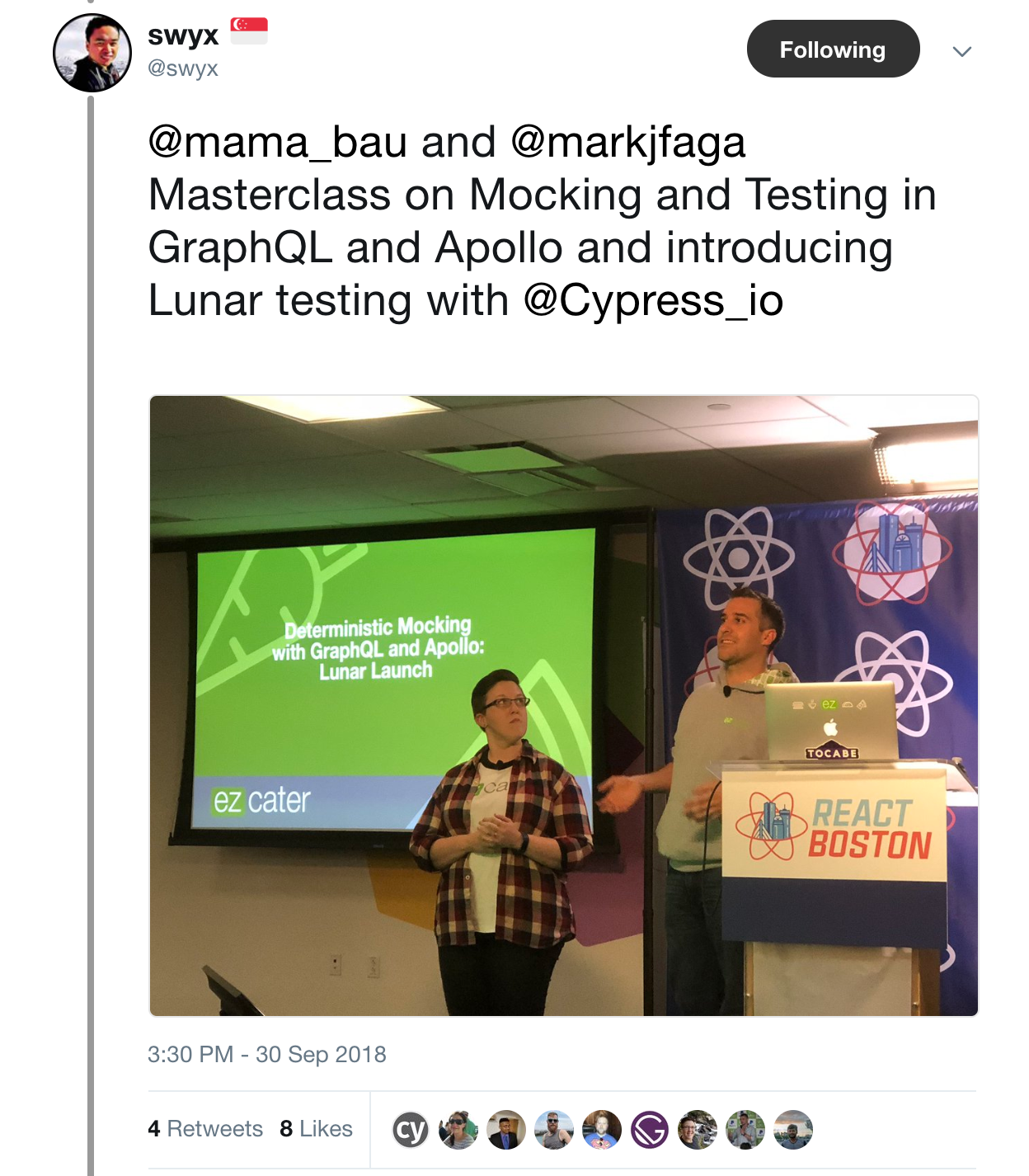 I have recently spoke at Boston JS meetup hosted by ezCater but I don't think I had pleasure speaking to Hillary Bauer @mama_bau or Mark Faga @markjfaga. But if you check out their presentation at https://github.com/mjfaga/react-boston-2018-lunar-launch - it includes the complete example project and slides. They show how to solve a hard problem - mock a GraphQL backend from end-to-end tests. For the test runner they have picked Cypress of course - the open source test runner I work on!

So I was intrigued, especially because we don't have a good recommended way of stubbing GraphQL requests - it is coming as part of network stubbing rewrite. So I took a look at the example project, and I loved what I saw. For this blog I forked the repo to https://github.com/bahmutov/react-boston-2018-lunar-launch because I want to show some other tricks you can play to make e2e tests even better. 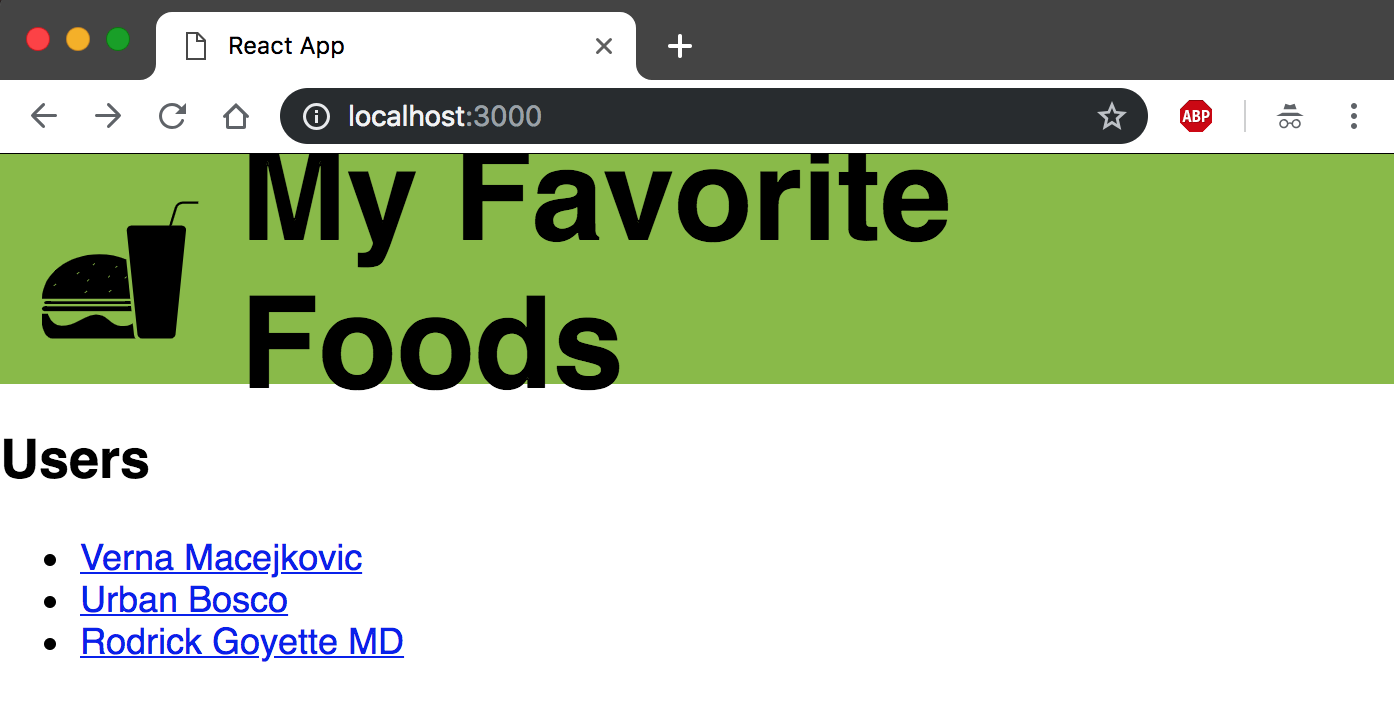 Clicking on any username shows the list of favorite foods. For the first user the list shows 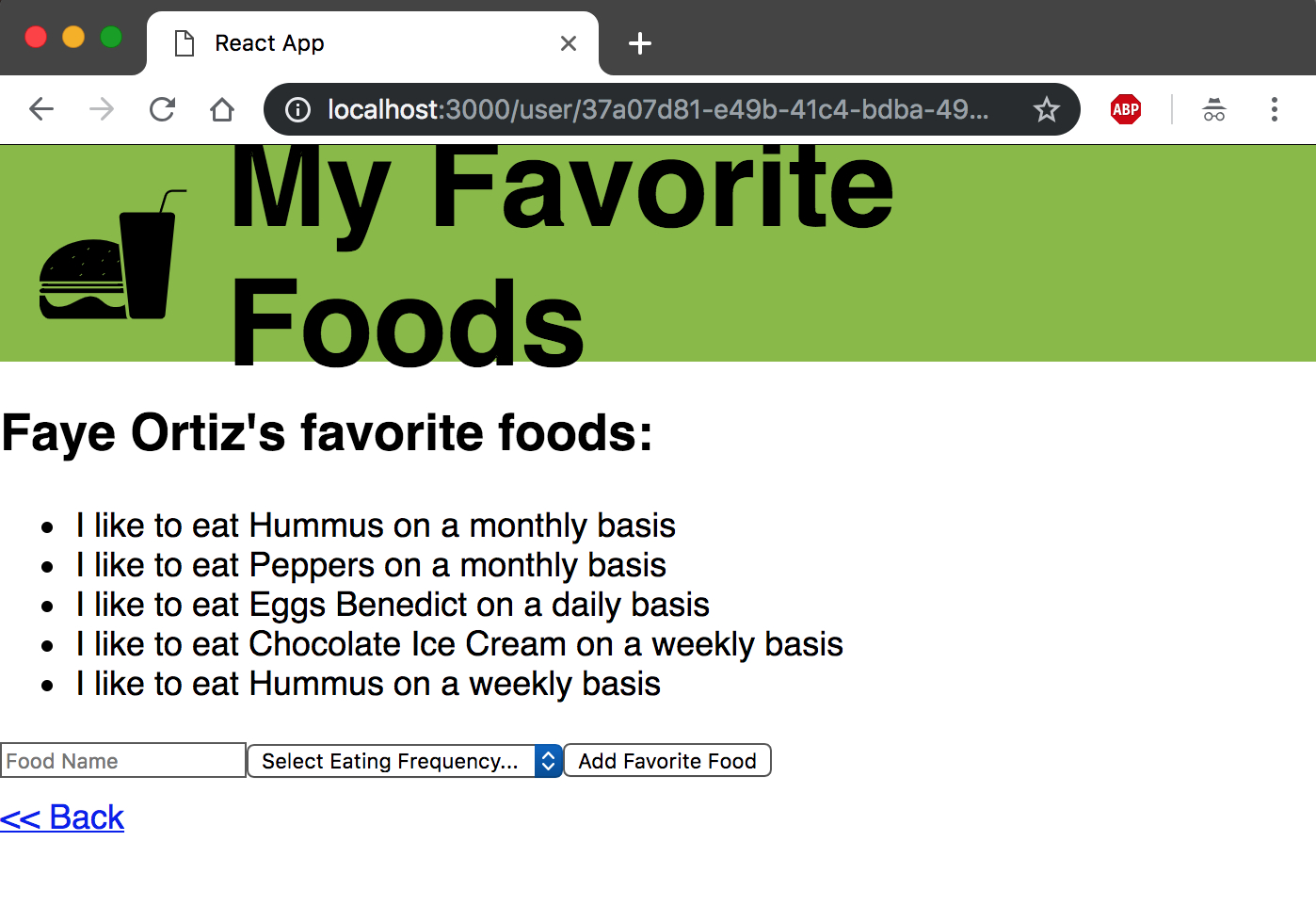 Note that this data is generated by the Faker module in mocks/mocks.js

Every time the GraphQL server starts, a new list of users is generated, and the order of foods is scrambled, which plays havoc with end-to-end tests.

The tests were written using Cypress.io - which runs a real browser (Electron or Chrome) and shows the test steps on the left. You can find the tests in spec file cypress/integration/AddFavoriteFoodToUser.spec.js file. To execute tests have the application and API running and open Cypress with npx cypress open command. Then click on the spec filename AddFavoriteFoodToUser.spec.js and enjoy the fast running tests.

These are true end-to-end tests - they load the app in the browser, click on DOM elements, type into input elements and assert the application shows the expected value after it fetches the data from the server. But the tests always pass, even if the data the server generates changes. How does it do it?

Let us take a look at the very first test - because it is the most interesting one. Here it is:

When the test starts, the test sends a GraphQL mock to the server using custom cy.mock command. Here is what this command looks like (from cypress/support/commands.js file)

and before we visit the page we send mock GraphQL definitions with cy.mock to the server adding them to the resolvers.

When the app asks for data, it receives this mock data, the same 2 foods every time, no matter what the user id is. This is why the test can visit page /users/1 and expect the DOM to always contain "Spaghetti" and "Coconut Water", assuming the application logic uses the GraphQL response correctly.

Great! Let us improve this test a little bit. And these improvements are not because the above code is bad - not at all. The mocking and tests are 100% solid, I love them. The improvements are further refinements that will make the tests a little bit tighter, but not fundamentally different.

When we look at the command report on the left side of Cypress, we can see that there were two requests to the server using cy.request and there was an XHR call to /sockjs-node. Cool, but where is the GraphQL request our application under test made? To see what happens, open DevTools and rerun the tests. 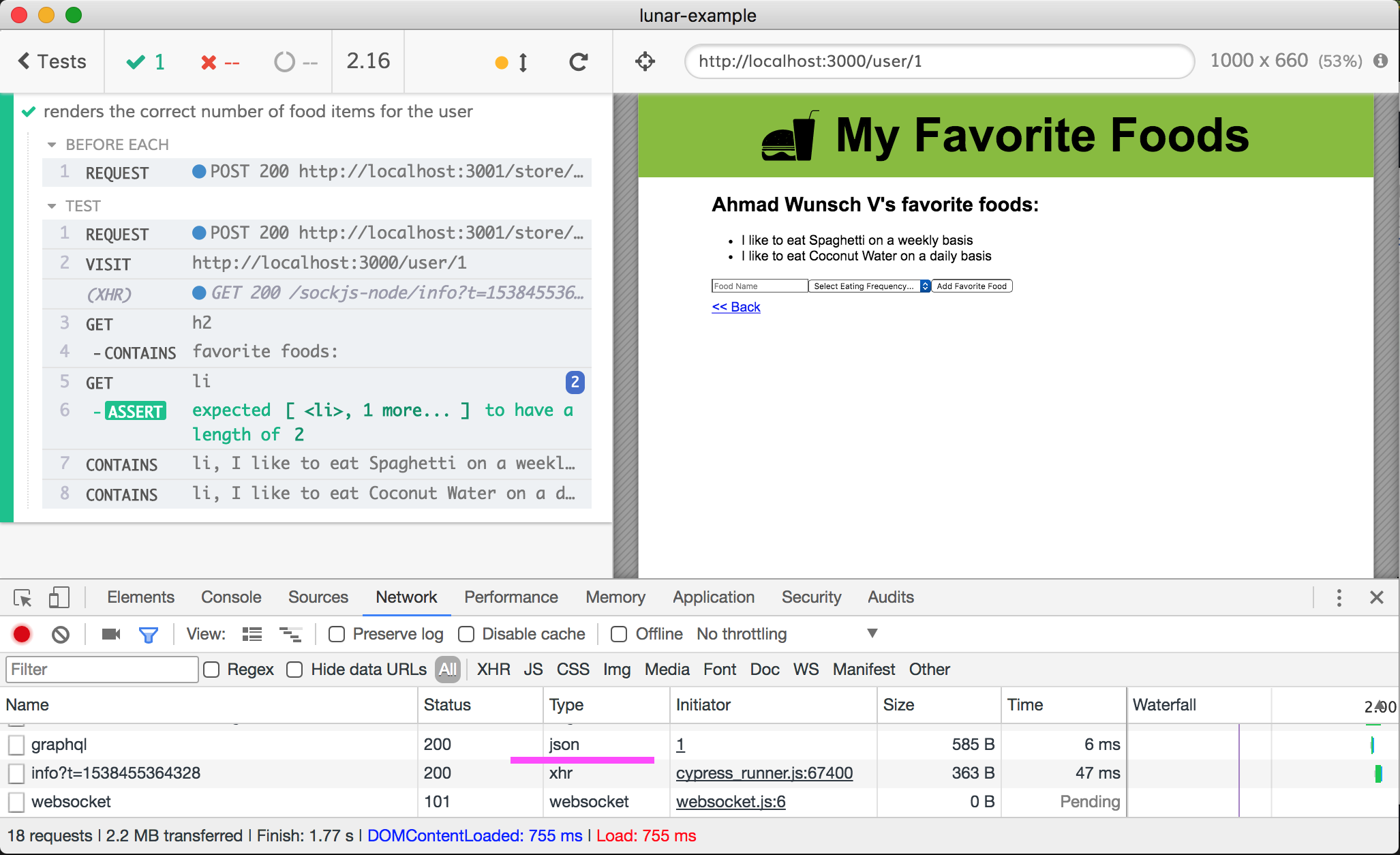 Notice that the call we do see to /sockjs-node is of type xhr, while the GraphQL call is of type json. Well, the json calls are invisible to Cypress for now, just like any non-xhr call. So we need a way around it. The simplest way is to remove window.fetch from our browser and force GraphQL client to fall back to XHR. There is an entire Cypress recipe showing different ways of doing this. In our case we can react to window:before:load event in cypress/support/index.js file. 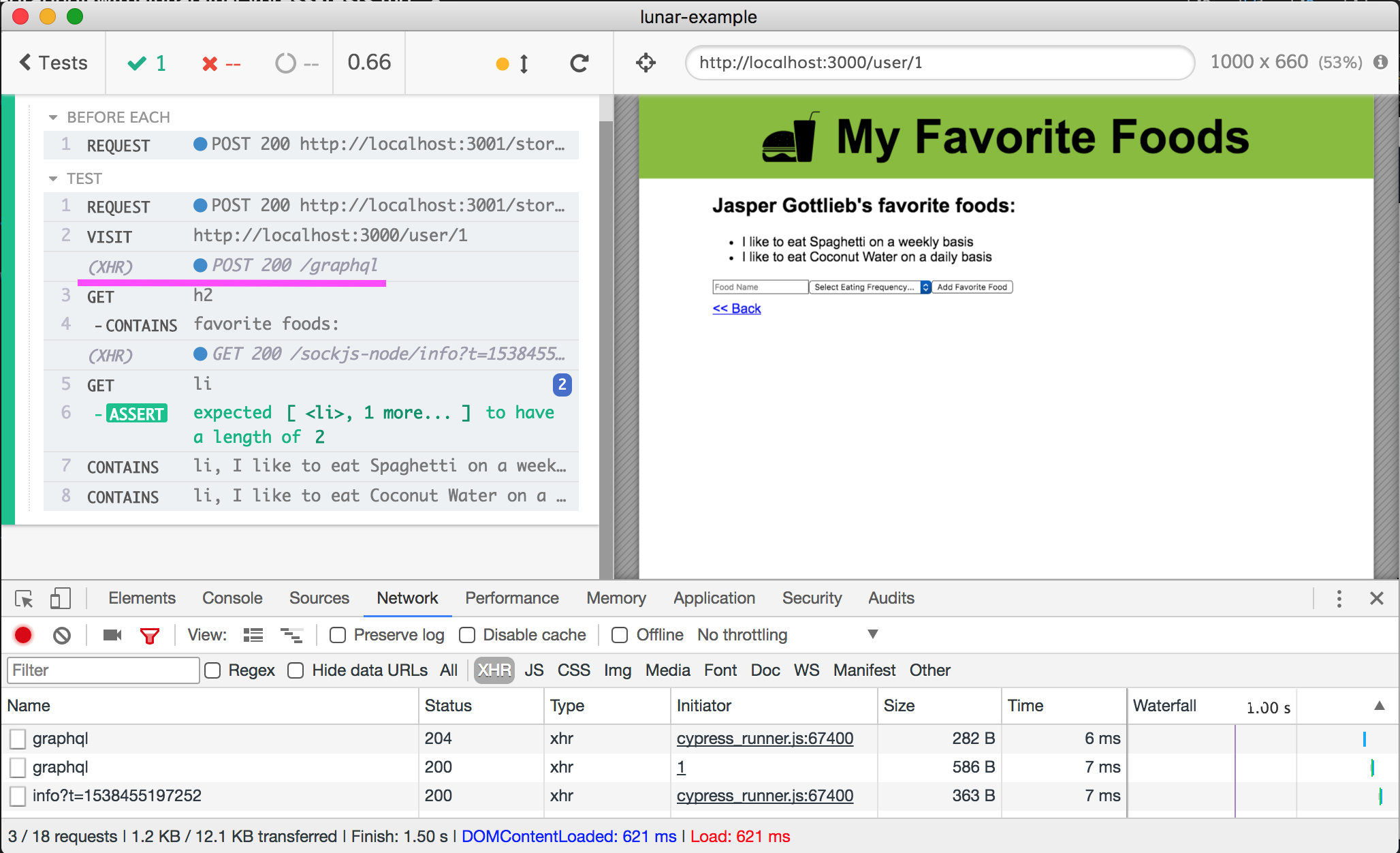 Now that our tests can "see" the GraphQL call from the application, we can make the test more precise. We can make our test wait for that call to happen, before we start checking the DOM. We will start observing XHR calls using cy.server and will setup spy on route POST /graphql using cy.route 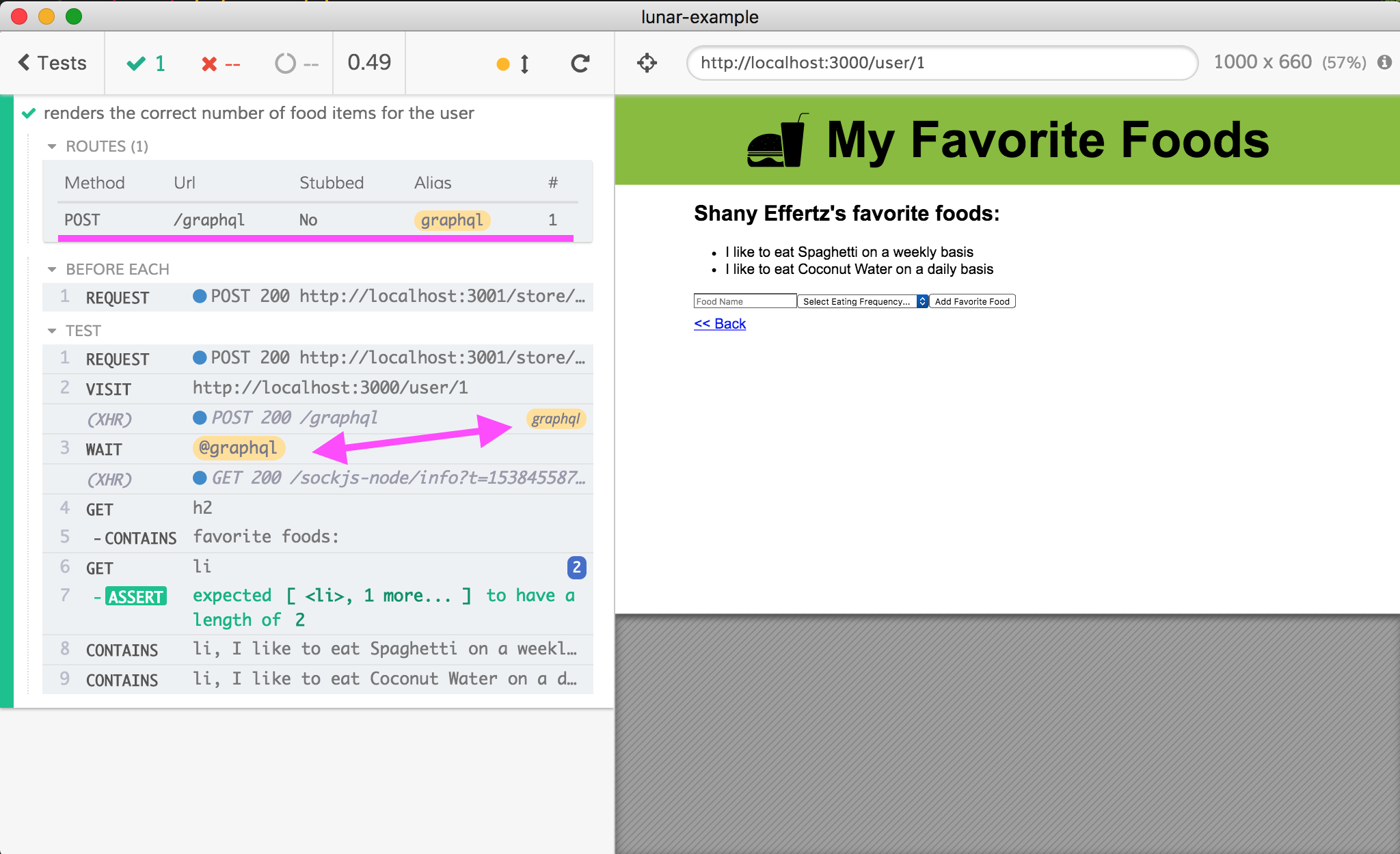 We can see the WAIT @graphql command in the log, but when we click on that command (while DevTools is open) we don't really get to inspect the response. It is just a Blob object 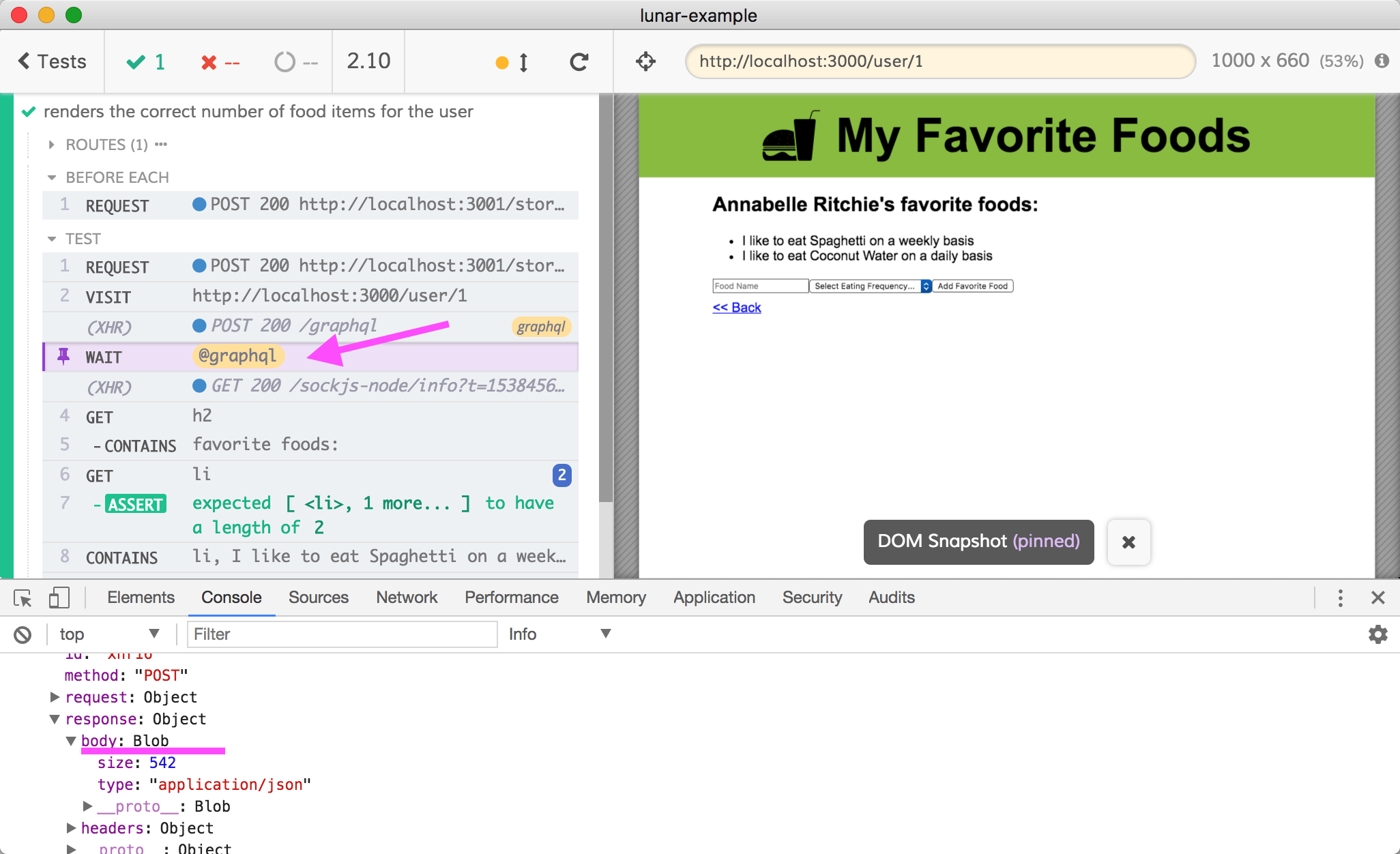 I would like to print the decoded returned value in the DevTools when I click on WAIT @graphql command. To do this, we can add a custom command like this

Note: I am using .then(r => Cypress._.get(r, 'response.body')) and not .its('response.body') because .then calls do NOT show up in the command log, while .its calls always do. Since I want to only show Cypress.log output, I am using the longer callback function to avoid extra printing.

Now when we see Wait @graphql in the command log, we can click on it and see the response object 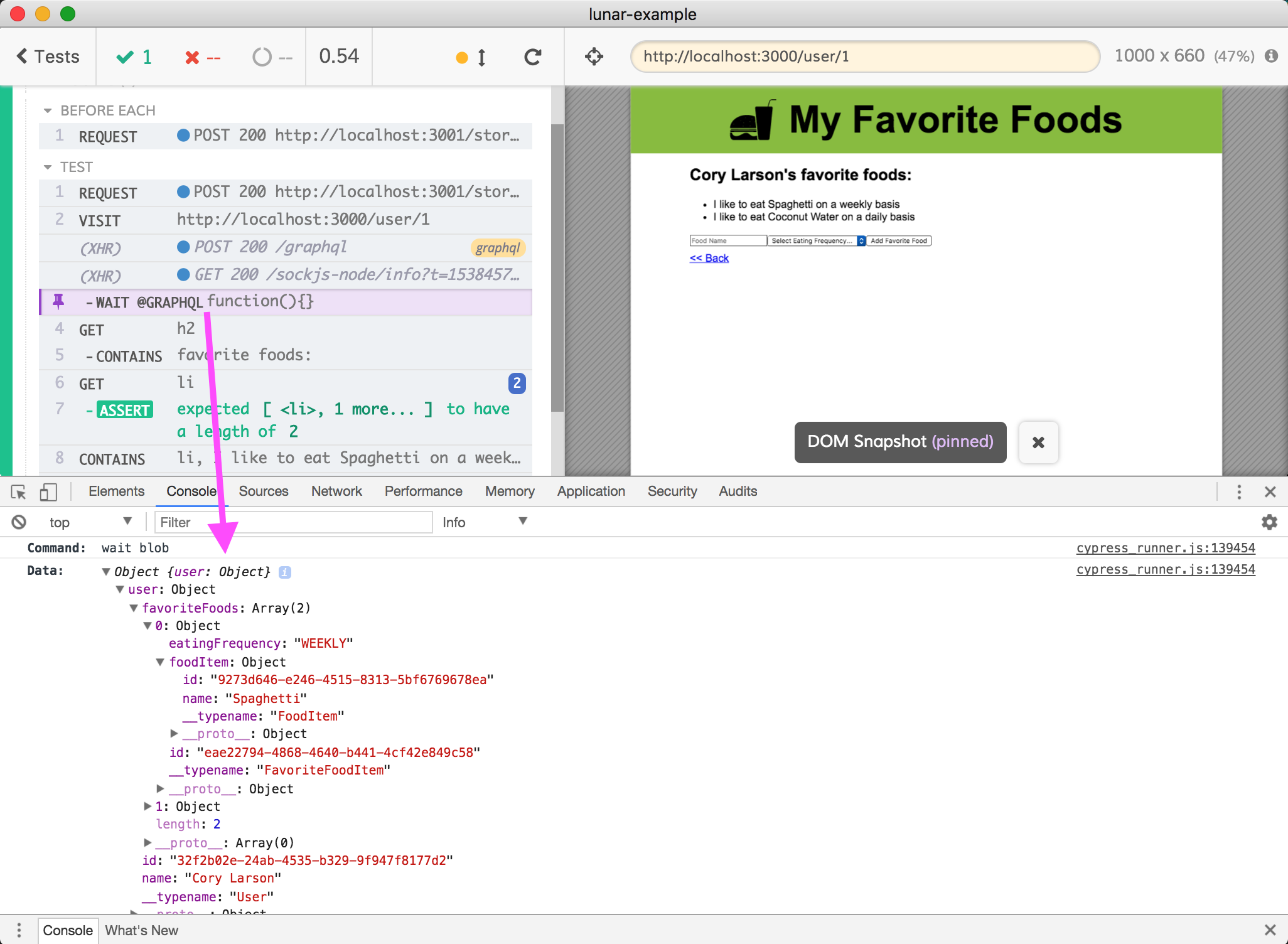 Now that we have decoded response from the Blob, we can actually confirm that the Lunar mock server is sending the expected values. For example, we could extract the names and frequencies of foods from the Blob and check them.

It is just massaging the data using Lodash helpers bundled in Cypress._.

Note that we get the name value in the callback, and then use it to validate h2 element, but we don't need to put all other commands like cy.get or cy.contains into the .then callback. Cypress commands are queued automatically into the same queue. cy.get('li') will only run after cy.then(...) completes, which completes only when cy.contains('h2', ...) passes.

The custom command cy.mock serializes the given mock object and sends it to the backend. Thus it can pass value like name for example if it is hard-coded property.

So you are limited to getting the data from the decoded GraphQL response or duplicate data between the mock and the rest of the test. But wait, there is more! The sent mock functions are actually invoked by the GraphQL server, thus they can use anything from the input parameters server-side. For example

If you do not NOT want to include Lunar in your server code, and would like to completely mock GraphQL endpoint, you can stub the request before it even leaves the Cypress browser. See issue #122 and here is short example.

The above code visits the page, but then right away overwrites window.fetch in the application iframe. And it only overwrites it using Sinon.js bundled in Cypress when called with argument /graphql. Whenever application code tries to do fetch('/graphql') a fake function serverStub gets executed. Of course puts ALL logic client-side into a function serverStub that you will need to write.

Absolutely hands down I recommend lunar-core for mocking GraphQL endpoints for end-to-end tests. You can find all above code from this post in https://github.com/bahmutov/react-boston-2018-lunar-launch