The application fills the "div#app" element with the actual content

Can we do better? In some cases, we do know the initial data that our application will render at build time. Let us prebuild the HTML markup and serve it right away, and the web application will have time to start and then enhance the static markup with live behavior (I call this enhancement "hydration")

If we are showing a Todo application with a set of initial items, we could run the web application at build time (some frameworks make it easier than others, for example virtual-dom makes it very simple), capture the produced HTML and put it into the "index.html".

You can find this source code in bahmutov/hydrate-vdom-todo. We are going to start by looking at the web application main rendering loop - and it is very simple.

See the full file at src/app.js

This is pretty standard virtual dom rendering loop. The great thing about the first 3 code lines - they do not require a live browser and produce "virtual" markup from actual data, and we can easily convert it to HTML at build time.

Thus as part of my build in addition to running webpack, I also run hydrate-app.js that is extremely simple. It takes the empty index.html and fills the web application's div with the initial HTML

The dist/index.html has nice static HTML in its application div

We now get the initial web application markup immediately because it is part of the page. How do we "hydrate" or tell our application that it should just extend the existing markup? By default, the rendering loop tries to create a new root element from the VirtualNode

Instead of using createElement that takes VirtualNode instance and returns new DOM element, we can grab the DOM element from the page and create a VirtualNode! I am using helper library html-to-vdom that does this.

That is it, now that we created a VirtualDom from the actual HTML we can patch it using normal VirtualDom diff methods.

This is how a Virtual-Dom application can start without destroying and recreating a part of the page.

You can check out the live result, and most importantly profile the timeline. 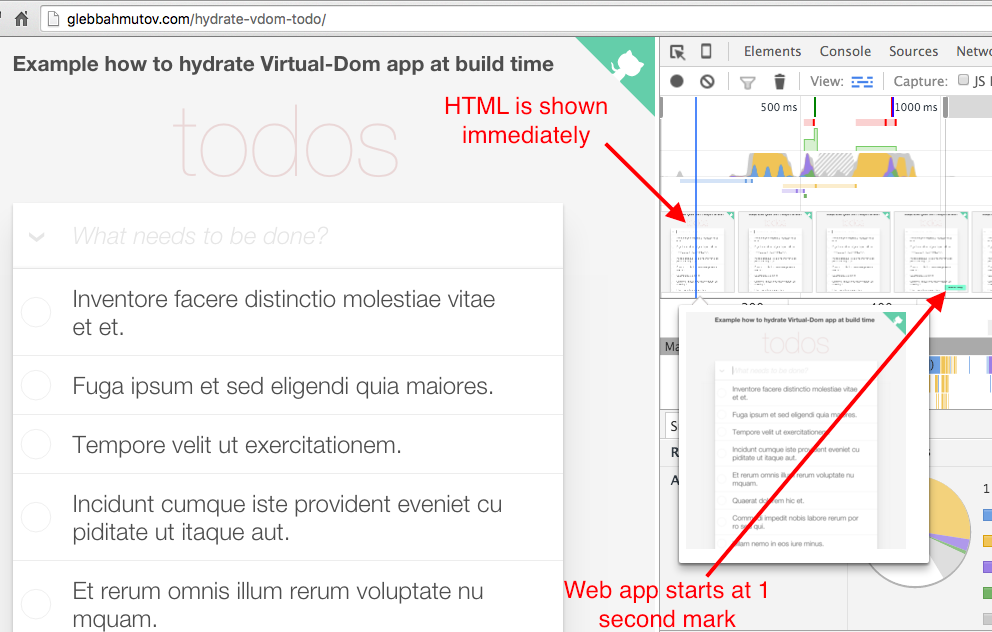 Notice that the Todo contents is shown right away - the application code is non-blocking at the bottom of the body, the markup is available, and the user sees the list at startup. The application once again starts at 1 second mark, but the content does not flash or flicker - because the virtual dom only adds a few patches to the HTML already there; all the patches are just setting up the event handlers!

A note of caution

The true web application should still start quickly. The initial markup might be there, but it is static - there are no event handlers, and the user might try to interact with the page only to find that it is unresponsive. One can allow the page to be used in the read-only mode - the user should be able to scroll, maybe go to the outside resources via A links, and so on.

Some frameworks make it simple to render HTML and state (model) to hydrate the page and quickly start. For example Virtual-Dom and React make it simple to generate static HTML on the server and hydrate on the client.

You can see how React can generate custom HTML markup and hydrate the application at every server request in this universal example. Each HTTP GET to the page runs the application code and generates 2 things: the HTML and the data store.

We send both the HTML and the finalState; the state being a simple JSON object in the page