Let's create a new Vue application and write a component test using Cypress + cypress-vue-unit-test combo. We will use Vue CLI v3 to scaffold our application and you can find the complete application in bahmutov/vue-component-test-example repository.

I picked the "default" option to use Babel and ESLint. The folder contains the scaffolded files 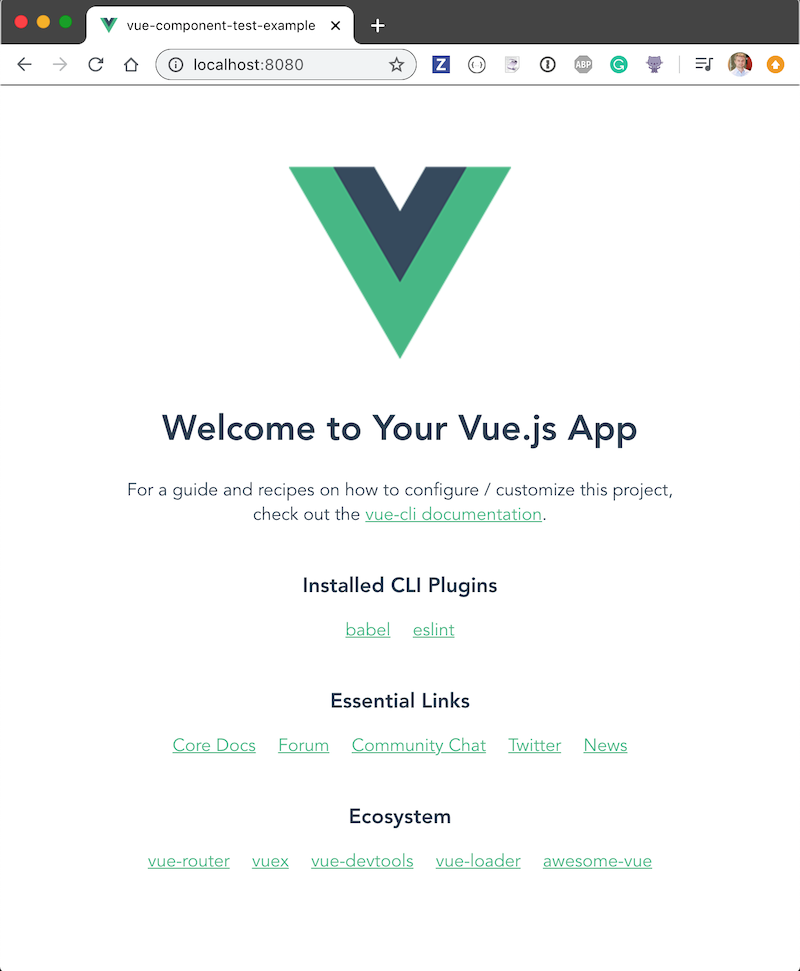 You can write E2E tests for Vue applications by using the official @vue/cli-plugin-e2e-cypress plugin. And I suggest reading one of the many blog posts on this topic, like End-To-End Testing A VueJS HackerNews Clone. In this blog post I want to show how to move down one level of the testing pyramid to perform component testing.

The logic inside a component might become pretty complex. To guarantee the component still works as expected as the project becomes more complex, we need tests - and the closer the tests are to the way our users are going to use in the browser, the better. In this blog post I will show how to write realistic component tests that run in a true browser using cypress-vue-unit-test.

Let's update our project to be able to write Cypress component tests.

You can see the component testing enabled in cypress.json file

Let's write a component test for HelloWorld.vue component to make sure it correctly renders the property msg.

In the test we import the component and mount it using a function from cypress-vue-unit-test. We pass props using propsData option and then the component becomes a full-fledged web application! Let's see this in action.

We can see the new script test:components added by vue-cli-plugin-cypress-experimental.

With the above command we have started Cypress. We see a couple of component spec files in the window that opens 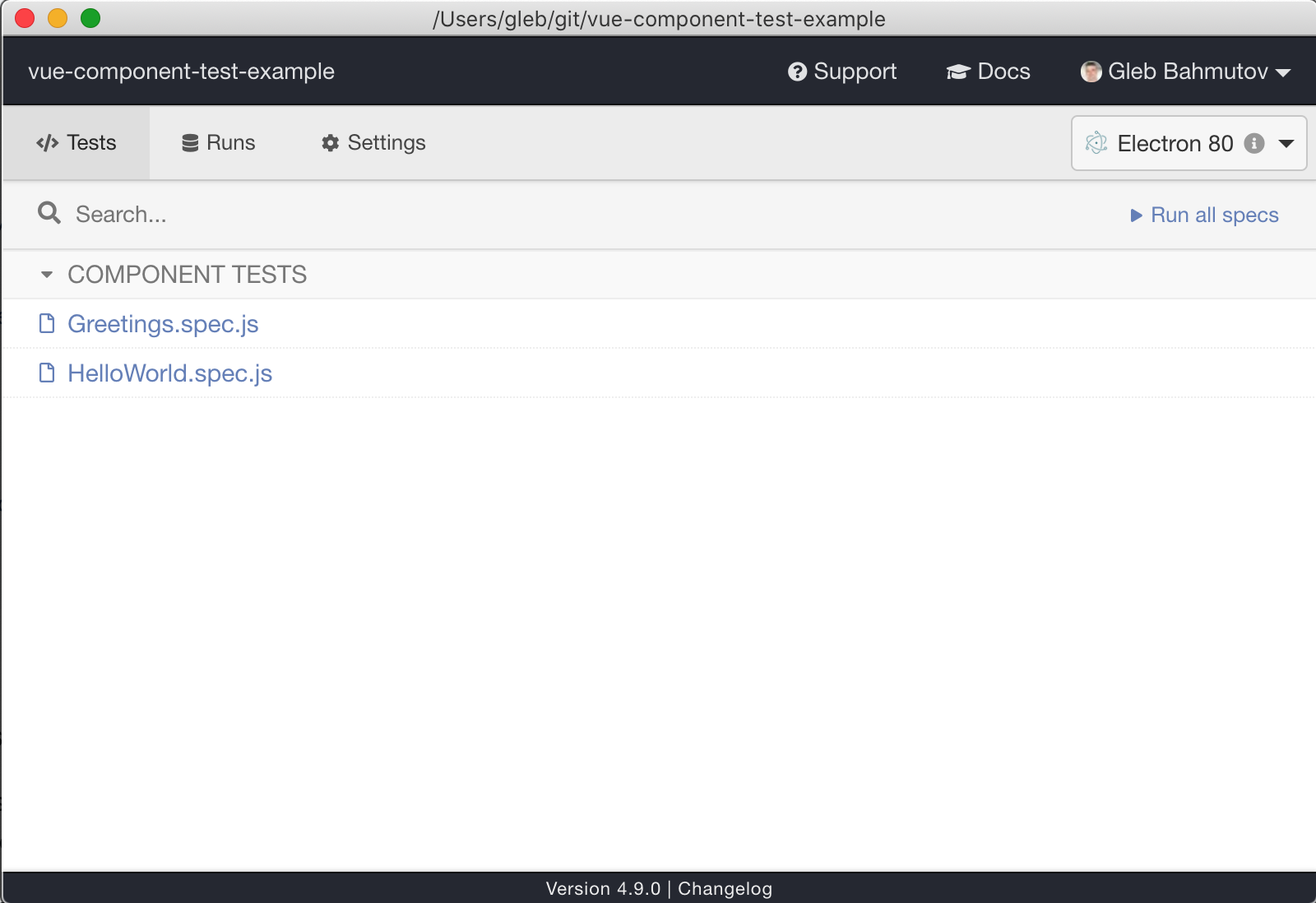 Tip: use browser drop down to select a different browser amongst the browsers detected on your machine. 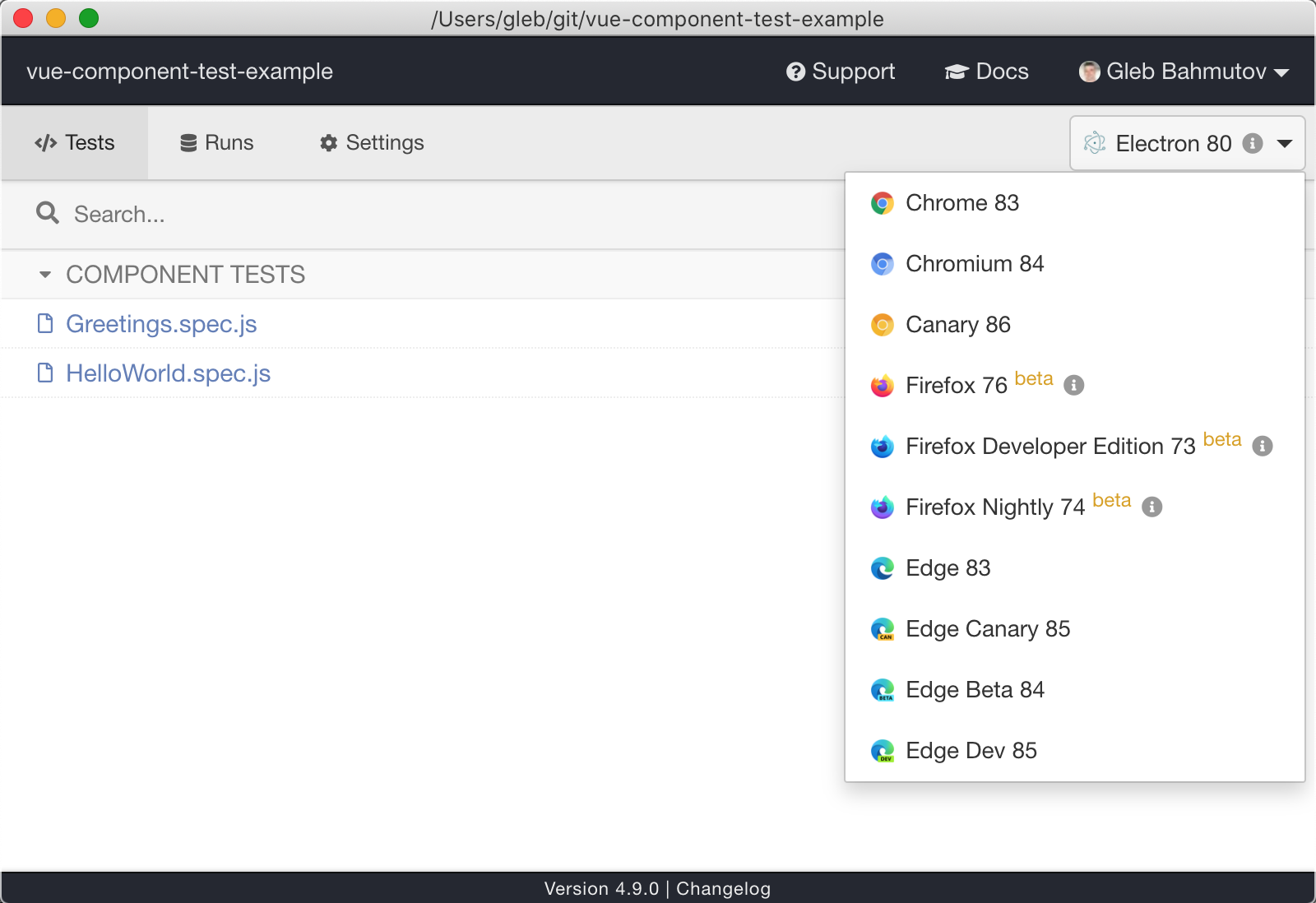 Click on "HelloWorld.spec.js" file to start the test. The test shows the component running inside the browser.

We can confirm the msg prop was rendered in the right H1 element by hovering over the command in the Command Log on the left. The found element is highlighted in the DOM snapshot on the right. 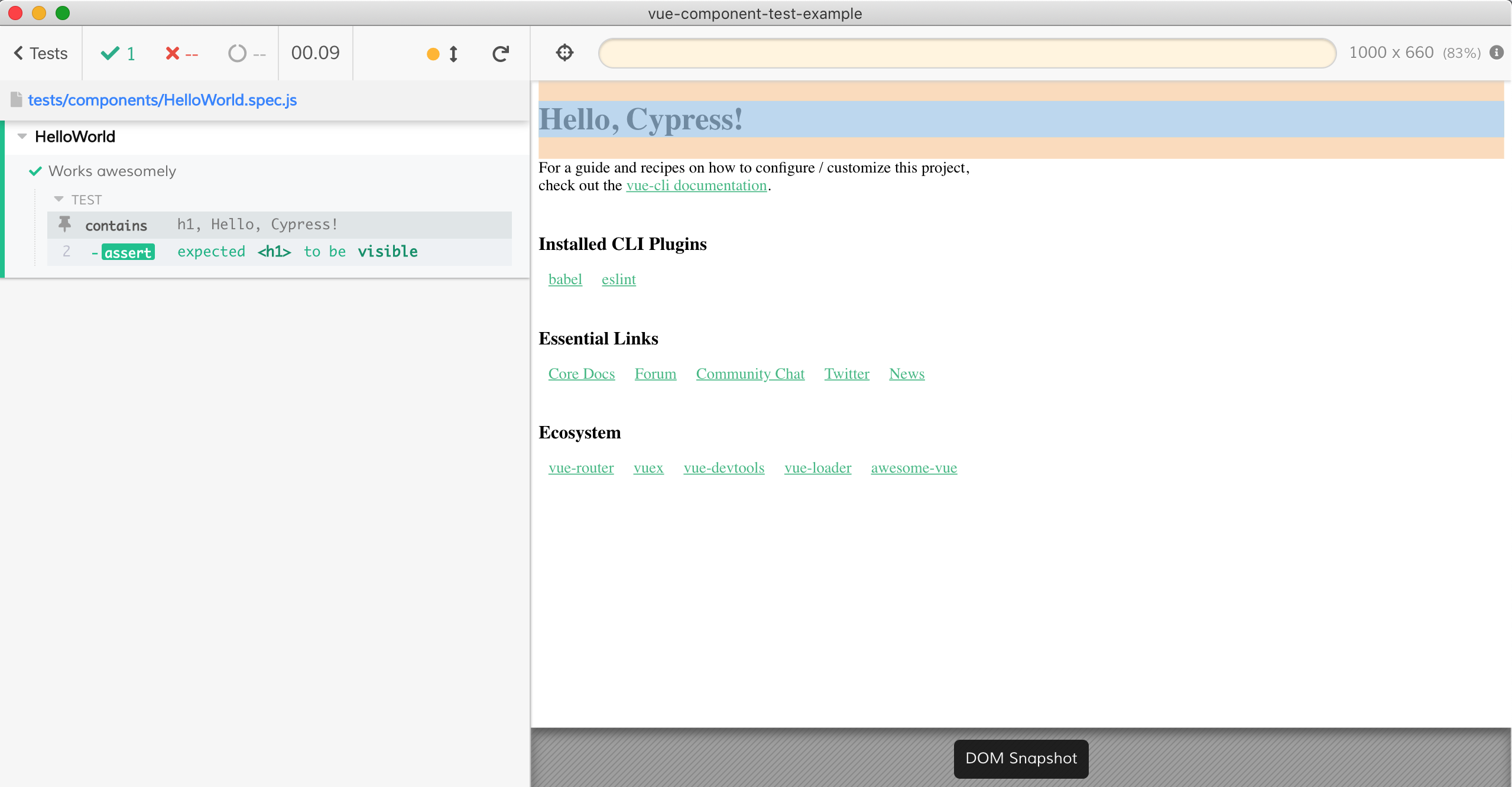 As you edit the spec file and save it, the tests automatically re-run.

In fact, if you change the spec or any file it imports, even indirectly, the tests will re-run. For example, let's change HelloWorld.vue to show the message in H2 element instead of H1.

In the movie above we jumped to the failing test command using Cypress Test Error Frames. Clicking on the error location opens my text editor at the right command.

Everything in a modern Vue application is built out of components. The src/App.vue is a component too! Let's write a test to ensure there are essential links.

The correct links are found by first finding the h3 element, then its next sibling and then finding all li elements under it. 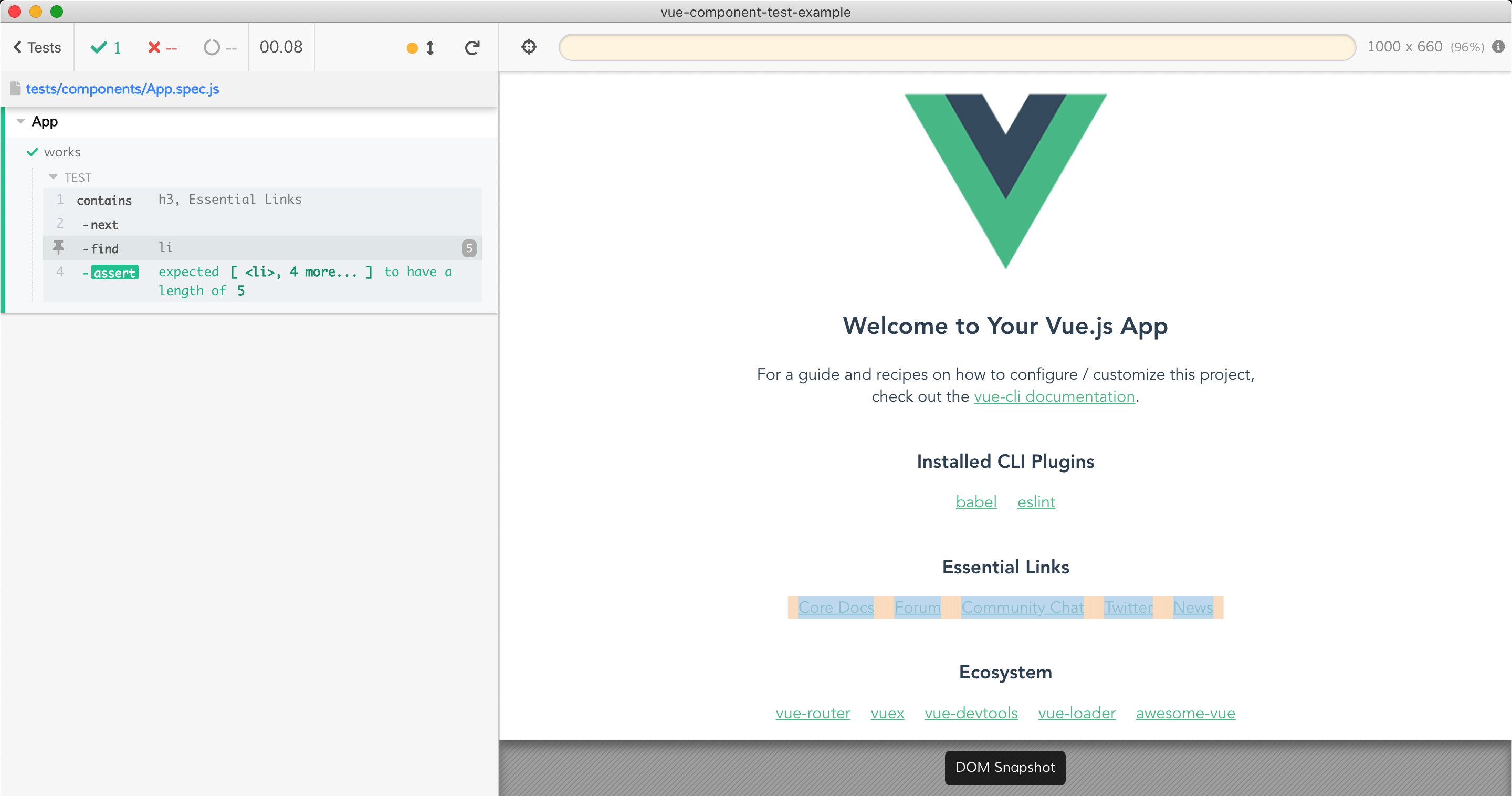 We are very excited about component tests running inside a real browser with full Cypress API, built-in code coverage, huge list of plugins for visual testing and other tasks, Dashboard support, etc. Give cypress-vue-unit-test a try, open any issues found, give us feedback!