Note: source code for this blog post is in bahmutov/cypress-should-callback, see the spec files.

Cypress has a built-in retry-ability in almost every command - a concept that still keeps blowing my mind, and makes for a great demo during my presentations. For example, here is an application that adds elements to the page one by one

My Cypress test for this is extremely simple.

Imagine our test only checks for 2 items - it won't wait for 3 items to appear. The test passes as soon as the second item has been added.

There is a huge variety of assertions you can use. Cypress comes with Chai, Chai-Sinon and Chai-jQuery assertions, and you can easily bring additional assertion libraries. The best part - the Cypress assertions do come with IntelliSense, which makes writing them less of memorization and more of expressing what you want to "see" in the test. 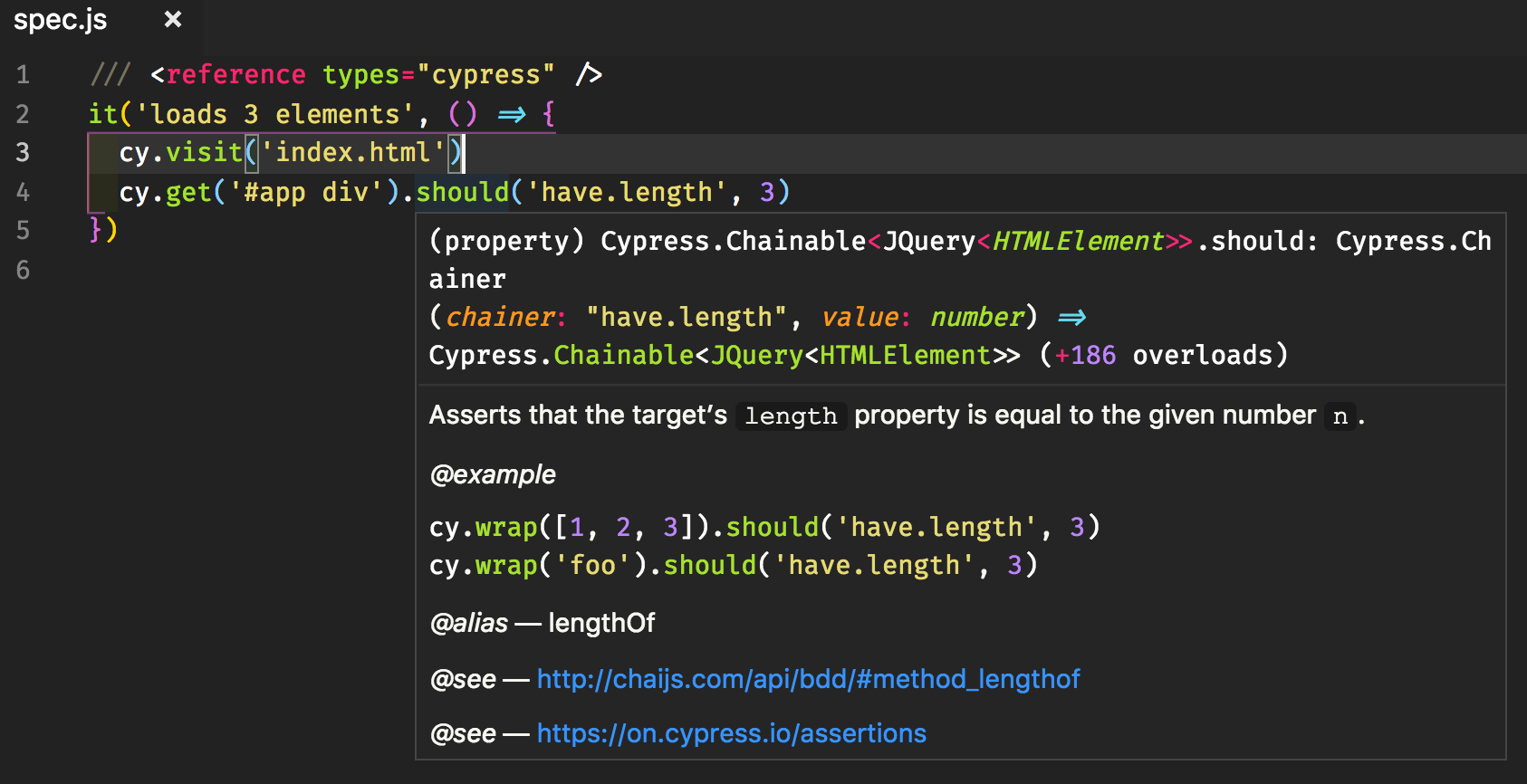 If built-in assertions are not enough, you can pass your own callback function with assertions. For example, what if we want to confirm the text in each of the three items that appear? We could write 3 commands with 3 assertions.

The test works, but the selectors are complex, and I would like to have a single assertion, rather than multiple ones. If I want a complex assertion that Cypress will use to rerun the previous command until it passes or times out - I need to pass a callback function to should(cb).

I can use any BDD and TDD style assertions inside the callback function, or even throw my own errors.

Should callback is an escape hatch - a way to write very complex logic to check the state of the application's user interface or internal state.

Note that any returned value from should(cb) is ignored - the subject passed to the next function is the original subject Cypress passed to the callback function.

If you want to change the subject - do it in the commands running after the assertion. At this point you know that assertion is passing and the application has the right UI and state (unless the app changes right after passing the assertion).

If you want to write a custom Cypress command that would retry an assertion that follows it, it's not difficult. The code snippet below comes from cypress-xpath module we have written as good example.

You can even remove all boilerplate of writing custom commands by using 3rd party module cypress-pipe. For example if the function that returns elements is our custom plain function, it will be retried with our should(cb) function.

I love using cy.pipe command because it allows me to compose "regular" functions in place in order to create a callback function. For example in the above example we get elements and then inside the should(cb) iterate over them to get innerText property. But we can use "standard" data transformation functions from a good functional library like Ramda to extract property innerText from a given list of items.

In the above case, we don't even need should(cb) with custom function, and we can use deep equality to confirm the text inside the elements.

We can always start with custom should(cb) callback function, then if we notice general data transformations, refactor it to make it simpler and "standard-like". Readability and simplicity is the goal.

Because the .should(cb) callback can potentially run many times, you should never use any cy.<command> methods (you can still use the static Cypress.<command> methods). Trying to call cy.<command> from the callback will try to schedule lots of commands, changing the subject for the next iteration, and leading to the unpredictable results. Here is a typical example that incorrectly tries to check if the value sent by the server is shown on the page:

Instead, separate the assertions from commands. In the test above, let's confirm the fruit returned by the server is a string, and then check the page.

For more, watch the video Do Not Use cy Commands Inside A Should Callback Function.

I wrote my own little library of functional utilities that works very well with Cypress should callbacks, read Functional Helpers For Cypress Tests.