This blog post has the content from the presentation I delivered at ManhattanJS. There are a couple of slides and a repo to go with it.

I will show how to reach into a live Angular application and overwrite features on the fly. I will also show how to load the application from the Node environment and how to unit test private code without source modifications. You can try the steps yourself by cloning the repo and stepping through the tagged commits step-1, step-2, etc.

Create a static page with HTML5 boilerplate code that shows a list of names to greet, something like this (saved as index.html) 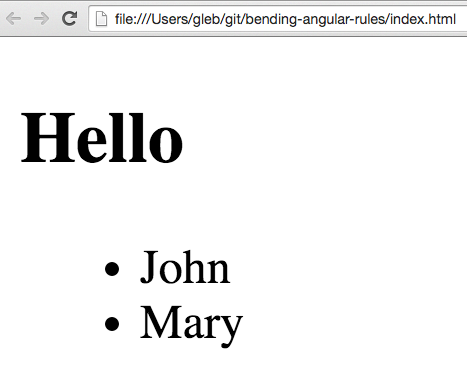 Let us allow the user to enter new names to be greeted. We will need to add an input text field and a button. We can add them to our static markup for now

Add Angular controller to the page, it will be injected a special object $scope to hold the list of names

You need track by $index if you want to allow duplicate names in the list. We can control the list of names to be shown from the outside. From the browser's console type

We can access the scope of any DOM element (or surrounding it) via element.scope() method. Since the $scope is simply a plain object, to let Angular know we have modified it and would like to see the changes, we need to call scope.$apply() method.

Let us connect our static input field and the button to the list of names. We can change the HTML markup to bind the input value to the property newName on the $scope

We need to write the addName() method, otherwise nothing is happening.

Nice! The newName property was created implicitly by the input field bound to the model property newName. Since we are using built-in click handler ng-click, we did not have to call $scope.$apply() - it is done automatically for us.

We notice that the added name is NOT cleared from the input field. 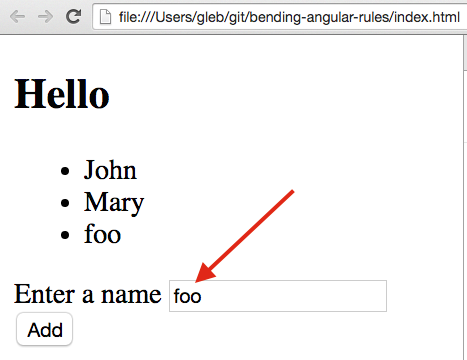 We never set the scope property to the undefined or an empty string, thus it just stayed in the DOM. While it would be simple to write the following code, we want to experiment first

Can we add the missing delete line to the scope method dynamically? Yes we can, right from the browser's console

BOOM! We dynamically extended an Angular application! This is a very useful approach: accessing methods from the $scope to wrap them on the fly. For example, we can monitor the method's execution. From the Chrome console:

We can even find where the code is without knowing it. Let us say, we want to stop when the button is clicked and we get into the addName method 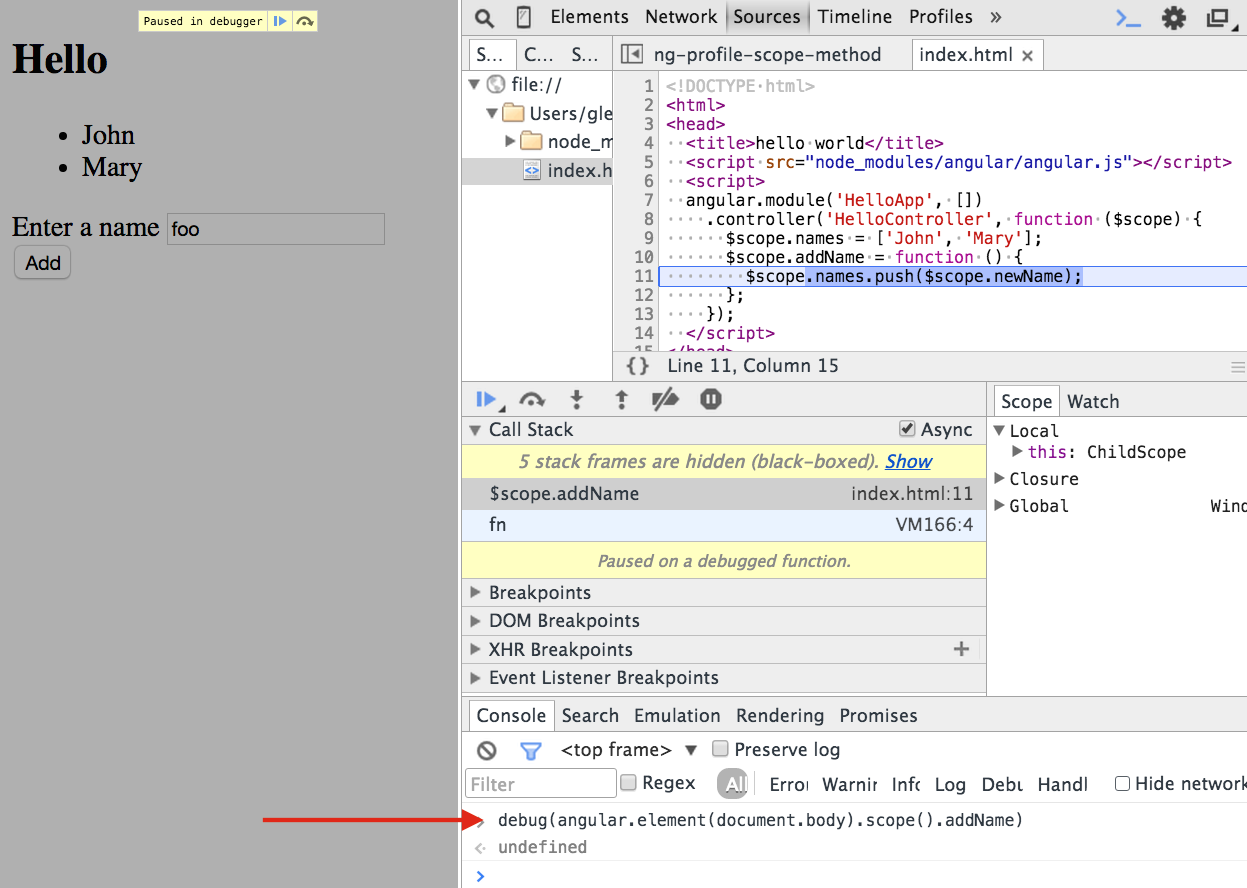 Calling the server to get the new name: step-4

Let us show how we can bend JavaScript closure rules a little. We can get a reference to the $scope object and the $scope.addName`, thus we can override the method completely at run-time

This is a complete replacement. What if we wanted to do something else - like partial replacement? Here is a good example. Let us say, $scope.addName grabbed the name not from the input field, but from a server.

Well, we are running straight from the file system using open index.html. When we click "Add" button we get an Ajax error

Duh! We don't have a server to respond.

Bending the rules to mock the server response: step-5

Let us bend the JavaScript closure rules to mock the server. Here is how we are going to overwrite the addName method at runtime from the browser's console to fake the $http service.

BOOM! The mock promise-returning function from the browser's console overwrote a variable inside the parent's closure of a $scope method. We knew that addName is using $http and $scope variables. Thus we replaced the function by evaluating the $scope.addName method as is, but with our defined variables; $scope was the same, but $http was a fake one. The JavaScript eval takes the current scope as the parent scope, thus we can substitute new functionality into the existing application dynamically.

Really useful library based on this principle is ng-wedge, it is a mock response utility for a live application.

Why can't we load Angular app directly from NodeJS? step-6

We have installed the AngularJS library using Node Package Manager

Of course, we loaded Angular framework first in our HTML page, before loading the app.js file.

Can we load AngularJS framework itself directly from Node? Not directly

It would be very cool if we could load Angular without window. While this is possible, I prefer a different approach to this problem. We will simulate the full browser environment (window, document) under NodeJS. We can do this using benv module that puts a very simple API on top of jsdom.

Let us create a file that shows loading AngularJS framework and app.js from Node

You can now execute this file load.js from Node to verify that the synthetic environment has been setup and the Angular framework has been loaded.

Instead of printing diagnostic messages, let us load our Angular application. We can now use simple CommonJS require included with Node for this

Nice, we are instantiating parts of Angular app directly from the command line using Node without using any browsers.

Why did we spend time loading the Angular code under Node? Why is Node's built-in require anything but the ordinary implementation of the CommonJS standard? Turns out it has nifty features we can exploit.

Both of these features were used to implement really-need - a replacement for NodeJS require method. Some of the cool features it can do: rewrite the loaded source, bust module cache, rebuild the compiled exported values, pass arguments to the module and mock __dirname and __filename.

The pre hook is especially useful for source rewriting. We could use it to instrument the source code with code coverage statements. Or we could use it to "grab" references to private functions. Why would one need to do this? To enable quick unit testing of private functions, expressions and variables. For example if we had file foo.js that exports nothing, we could run the source through a preprocessor whenever someone required it.

and the evaluated source code would be something like

Imagine the new name to be added to the list comes from a private function inside the file app.js. 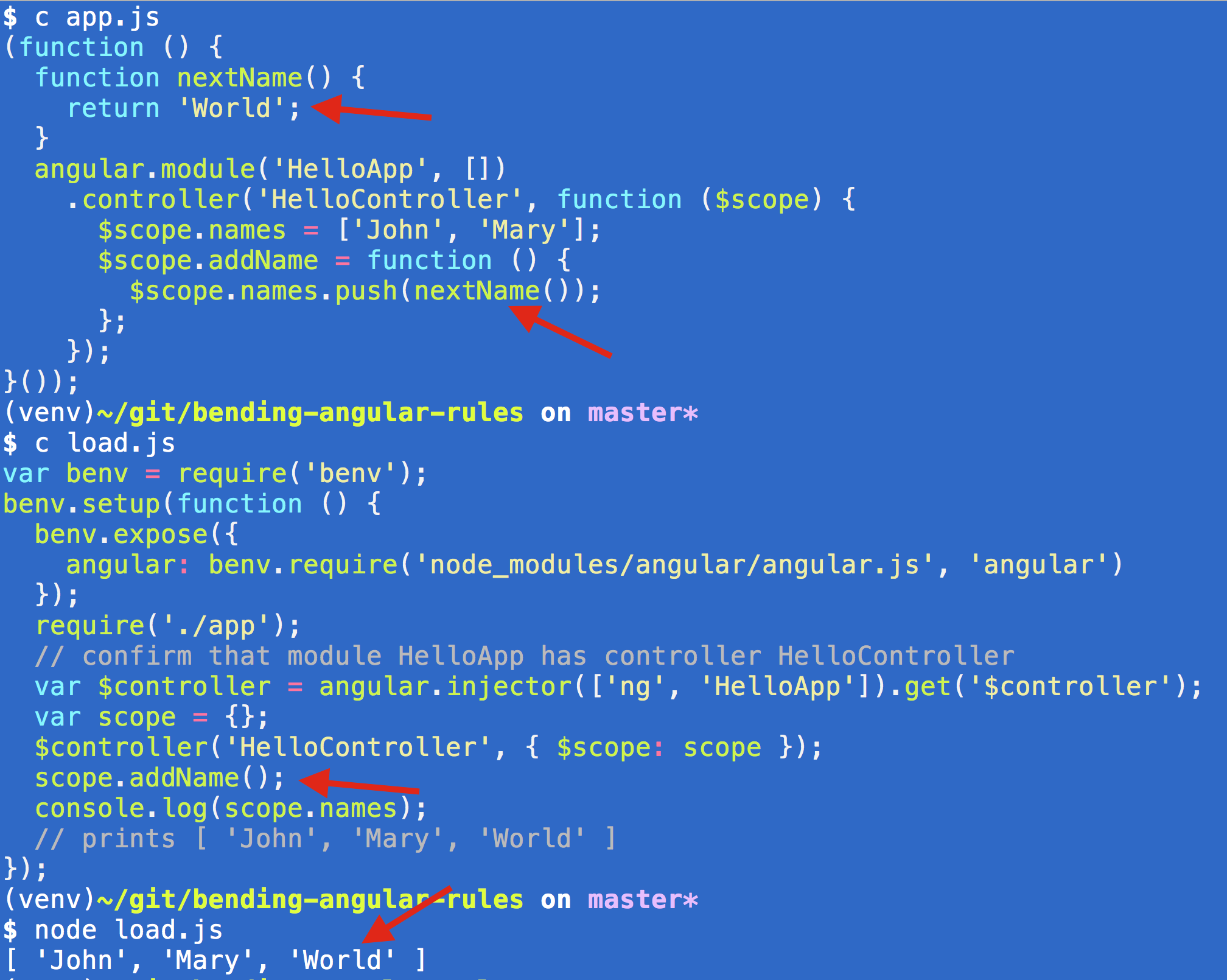 Can we unit test the function nextName to see how it behaves? Only indirectly by constructing a controller, adding a mock scope object, calling addName, etc. Such a long process. Or we could use a hook into NodeJS loader using really-need that can grab a reference to any function for us. All we need to tell the loader is the signature of the function we need. We have implemented the Angular initialization (using benv and NodeJS hook) in a single helper module ng-dice

We can confirm that the unit test passes 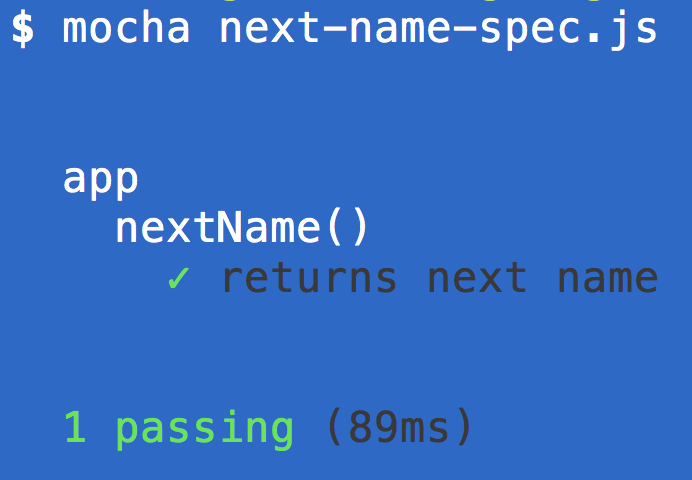 Here is what the unit test has accomplished

One can argue that unit testing private functions and variables goes against the principles of black box testing. Yes, but it pays to bend the rules a little.