Note 2: the webinar video has been posted at www.youtube.com/watch?v=MXfZeE9RQDw and the slides at slides.com/bahmutov/visual-testing-with-percy.

There is a nice little web application at toddmotto.com/angular-pizza-creator/ for ordering a pizza. It does not actually order pizza, but it surely looks appetizing!

When we click on a topping, the order changes price, and the pizza rendering gets a new set of sliced toppings dropped. If we are building a web application like this, how do we test it?

First, we need to ensure that the we can build the pizza we want and that the order is going to cost us the right amount. We can write such test using a functional end-to-end test runner Cypress.io. Our first test will check the following user story:

At the end the web application looks like this 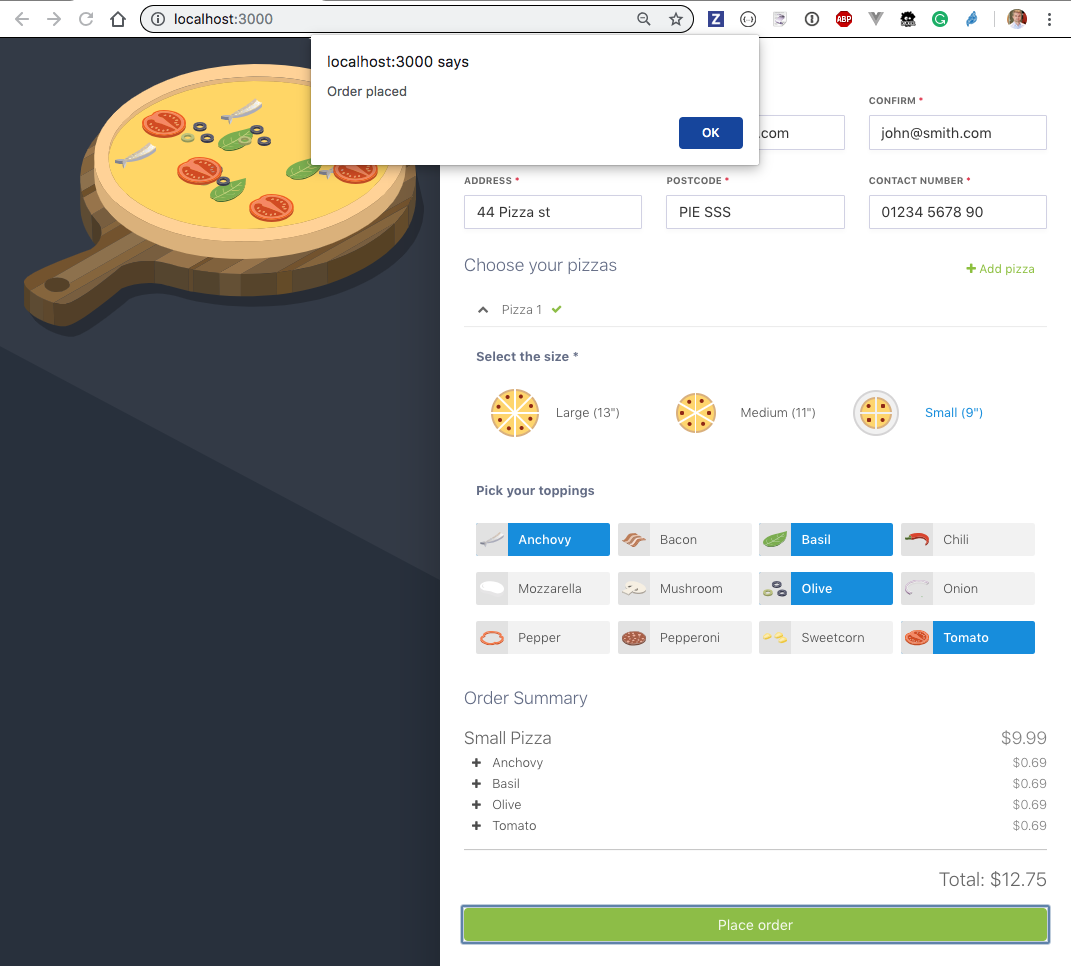 Here is our first cypress/integration/order-spec.js

If we plan to write more tests, entering delivery and picking toppings actions will quickly lead to lots of duplicate test code. We can factor them out to custom commands, making our test code more readable and dry. I will write the following into cypress/support/index.js file:

The support file is bundled with each spec file, thus my cypress/integration/dry-spec.js can immediate use the new Cypress commands.

Hmm, we can verify the order side of the application - but what about the beautiful animated pizza drawing? Are the toppings falling onto the pizza crust - or do they accidentally land outside the circle? And what if someone changes the pie from the mouth-watering #FFDC71 to much less appetizing #71FF71?

When dealing with images, we need to think where the baseline images are going to be stored - they quickly become a nuisance as their number grows. Think how many binary images can a Git repository hold until it becomes a nightmare to clone.

Also a huge problem with image diffing is the process of reviewing them and approving the visual changes. I would prefer to have an online service that shows me and other team members the differences in a nice convenient manner. I don't want to manually download images from CI to view them!

We need a complete solution, so today I will look at Percy.io visual diffing service. I have signed up for free with my GitHub account and created a project percy.io/cypress-io/angular-pizza-creator that you can see for yourself. My setup follows the Percy Cypress tutorial.

In my project I have added @percy/cypress development dependency.

Then I have added a single line to my support file

The imported @percy/cypress adds its own custom command cy.percySnapshot(). I write a test that snapshots the pizza before adding any topics and after in visual-spec.js:

Just remember: the test should take a snapshot when the application has finished rendering; and not before. The web app might take a while to redraw - maybe it is sending data to the server, or processing a complex operation. Adding an assertion is usually enough to wait as long as necessary, but no longer, thanks to the retry-ability built into most Cypress commands. To prevent the snapshot from being taken too early, like before the toppings have been applied to the order, the above test uses cy.contains:

I can ignore additional Percy messages in the Command Log - because I have not set up sending data for image diffing yet. In fact, I will not run image diffing locally - there is no need for it, due to asynchronous nature of image generation and comparison. Percy custom command just sends DOM snapshot and styles to Percy cloud, where the actual images are generated (across multiple browsers and resolutions) and then compared. In order to enable sending images, I need to change how I run Cypress. Usually one runs Cypress by simply executing npx cypress open or npx cypress run in headless mode. But when Percy runs it needs extra time - to send the DOM snapshots and styles to the Percy.io API. Thus I need to run Percy app, which will start Cypress and will make sure the image diffing starts, even if Cypress application finishes. The command should be:

I don't need to change anything in my package.json file - because normally I just work with functional tests. Only my CI configuration file needs to change its test command to run Cypress through Percy. Since I almost always use Cypress CircleCI Orb to run my end-to-end tests, here is my circle.yml file.

Note: I am recording the Cypress test results and video using cypress run --record on the Cypress Dashboard, which is a separate service from Percy web application dashboard.

For results to be sent to the right Percy project, I grabbed the PERCY_TOKEN from the Percy web application and set it on CircleCI as an environment variable. Then I pushed my code. CircleCI runs build #13 which shows Percy start message:

Percy outputs messages to the terminal when snapshots are taken:

After the entire run, Percy application sends the request to generate images and compare them and exits:

I can open the displayed url https://percy.io/cypress-io/angular-pizza-creator/builds/1663756 and after a few seconds the "Pending ..." status changes to "Unreviewed". There are two desktop screenshots (and two more generated using Firefox) that I can see. 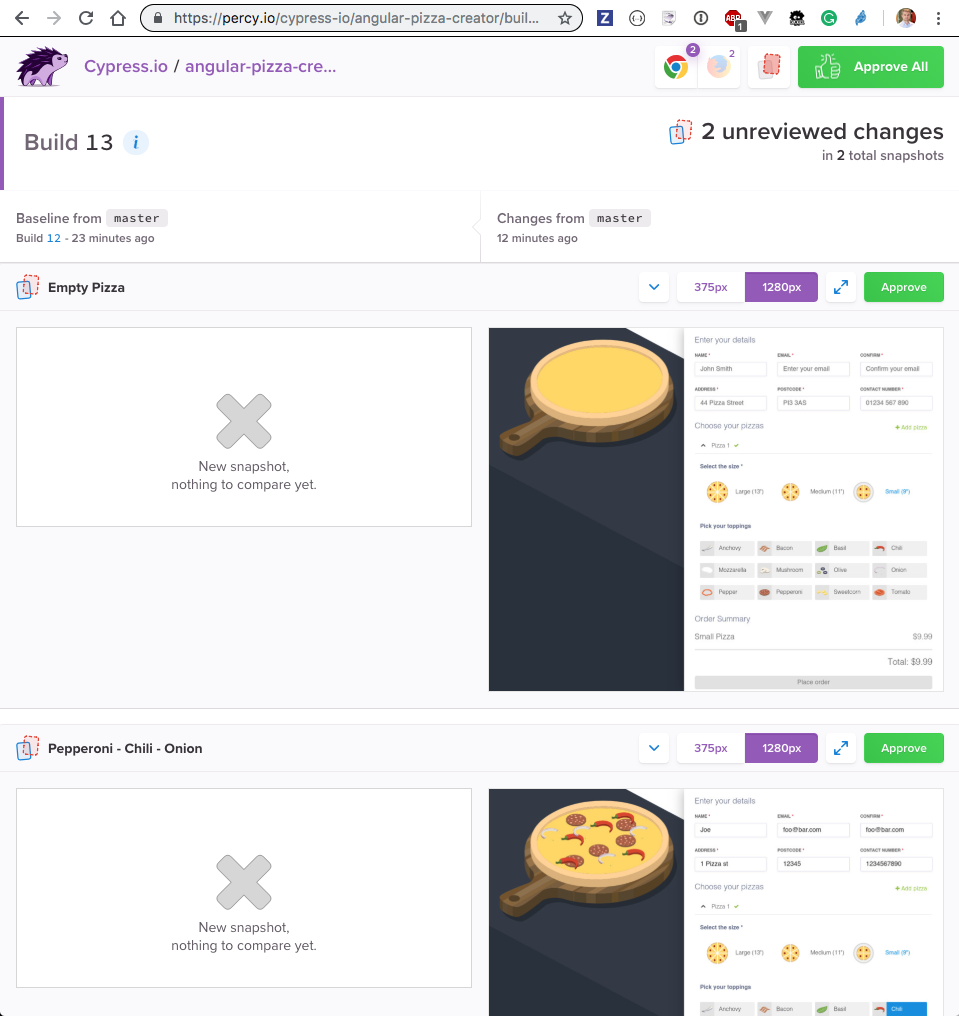 I approve the changes - now these snapshots become the official baseline images that will be used in the future for comparisons. All images are stored in the Percy cloud, and do not clutter the project's GitHub repository.

Let me change the pizza crust color to green and try pushing the commit. CircleCI build passes, and Percy web application shows that there are new changes - it has detected the change in color.

We can go into "baseline vs current image" view and toggle diff to see where the colors have changed.

Perfect, Percy web application catches the visual difference - but our tests have passed, haven't they?

Visual tests with Percy do not fail Cypress tests. Instead they send the DOM snapshots and all page styles to the Percy cloud where

A project could have 100s of images, waiting for all of them in the Cypress test might mean a loooong test. Thus Percy suggests a different asynchronous workflow it its "How it works" guide.

Percy recommends using pull requests to make any changes to the code. By default Percy project settings has the master branch as auto-approved. I had it turned off before to show image diffs, but now I will turn it back on.

2. For functional and visual changes I will open a pull request. Each pull request runs functional tests AND Percy sends back image diffing results as a GitHub status check. For example angular-pizza-creator/pull/2 automatically gets 2 commit checks: 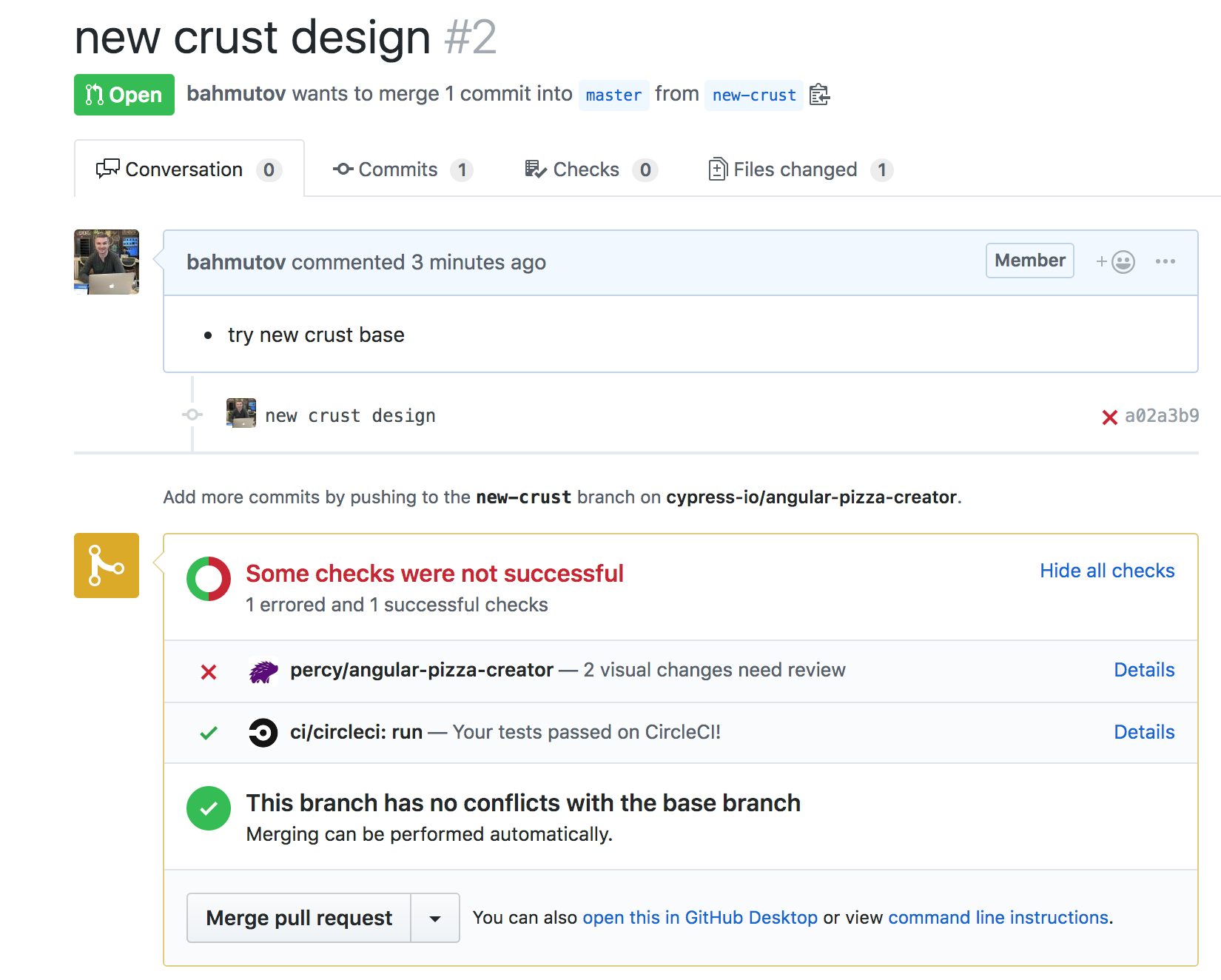 3. Clicking on the failed Percy check "details" link brings me to the diff view:

Thus each pull request needs the functional tests to pass and for the team to review and approve the visual changes (if it makes sense) - and there could be 100s of visual changes triggered across all part of the project, even for a small style change!

4. If I click "Approve" button in Percy, it changes the GitHub commit status to pass and my pull request is good to go.

The entire process is simple and convenient.

Running both functional and visual tests gives me a peace of mind. The chances of accidentally breaking the page layout or hiding an element, or making the app look hideous goes pretty much to zero. If you would like to know more about visual testing with Cypress.io and Percy.io check out these links:

There are also a few open source alternatives for visual diffing that do not have the GitHub integration or the cloud component that Percy provides, check them out if you would like to do image diffing yourself: on.cypress.io/plugins#visual-testing