In the previous blog post Microservices with fuge I have built a Seneca microservice and tested it locally using the new tool Fuge. It is time to build the Docker containers and deploy it to the cloud.

If you need a quick intro to Docker for a single Nodejs project, take a look at this gist.

The fuge tool creates docker-compose.yml file that gives the blueprints for several Docker containers to the docker compose tool. (You do need to run fuge generate system command for this, not just a single service)

Let us build our docker containers from these directions.

The tool went into each build folder, found Dockerfile and built an image. Now let us run the images.

In addition to fuge/compose-dev.yml file, the fuge tool generates docker-compose.yml file that tells each container the IP and port numbers of the other services (and their Docker mappings). Basically, it is a map that allows each service to find other services across Docker boundaries.

If we start our Docker containers, they will be hosted at IP 192.168.99.100. Open the fuge/docker-compose.yml file and copy / paste the above IP as PROXY_HOST in several places (these lines are commented out initially).

Note: I am note sure if we need to build the containers (previous step) AFTER we set the PROXY_HOST. Seems the order listed makes more sense, but I might be mistaken.

Start the containers using docker-machine -f fuge/compose-dev.yml up and see each service start and run in its own container

Notice that the site and the service run isolated: each thinks it runs at host 0.0.0.0 and port 2000x, but our website knows which ports are mapped where. Thus the site's api when using the Seneca client maps correctly 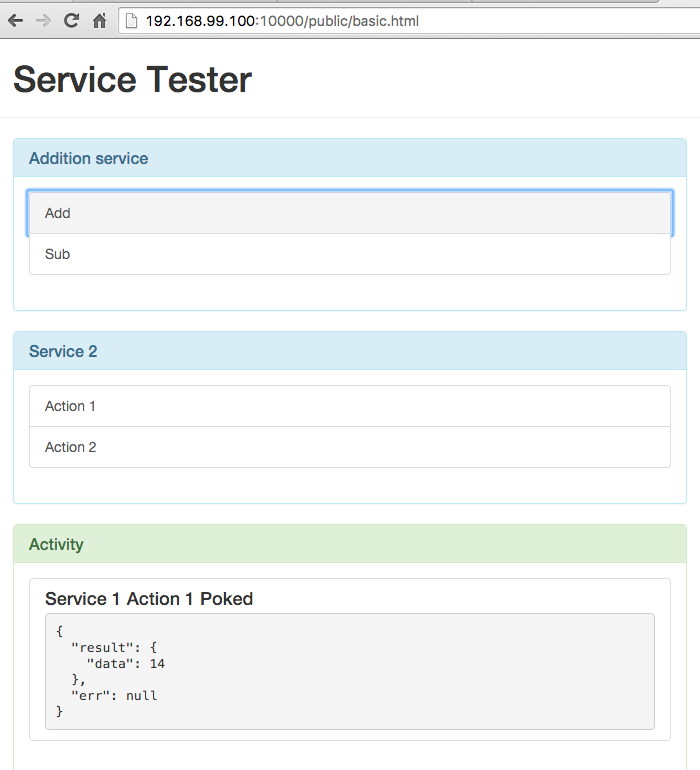 Let us deploy our microservices and site to the cloud, but this will require its own blog post.

To develop the site and the services locally, use the following commands